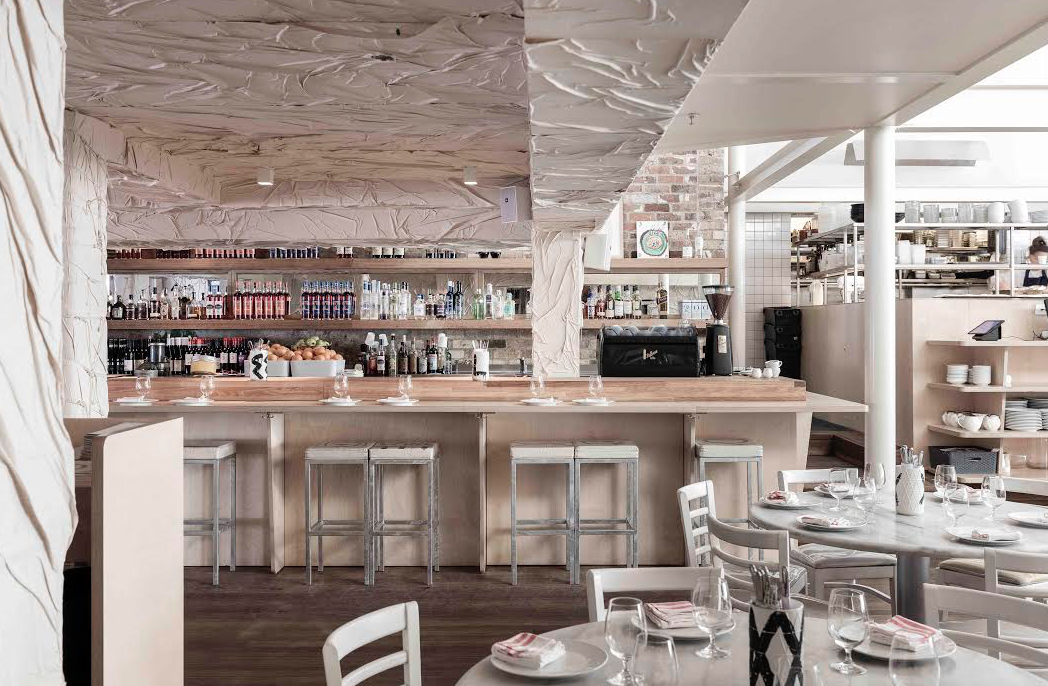 Australasia’s best-designed hospitality venues have been named in the annual Eat Drink Design Awards, which celebrate design excellence and innovation within restaurants, bars, cafés, nightclubs, retail spaces and temporary venues from across Australia and New Zealand.

This year, New South Wales dominated the awards with three venues named as winners in their respective categories as well as a timeless favourite being inducted into the Eat Drink Design Awards’ Hall of Fame.

Sydney’s inner-city suburb of Barangaroo is clearly the place to be in 2017; Campos Barangaroo (designed by Woods Bagot) took out Best Retail Design while Noma Australia (designed by Foolscap Studio) claimed the title of Best Installation Design.

Whimsical yet disciplined in its approach, The Dolphin Hotel (designed by George Livissianis) in Paddington was awarded Best Bar Design for its immaculate balance of diametric opposites.

Potts Point’s timelessly “theatrical” Fratelli Paradiso (designed by the late Mike Murphy) becomes the newest long-standing hospitality institution welcomed into the illustrious Eat Drink Design Awards’ Hall of Fame. In an industry characterised by transience, this special accolade acknowledges enduring excellence in the design of a hospitality venue of more than 10 years standing.

South Australia was not to be outdone by its eastern counterparts; Viet Next Door (designed by Genesin Studio) in Pennington was awarded Best Restaurant Design. 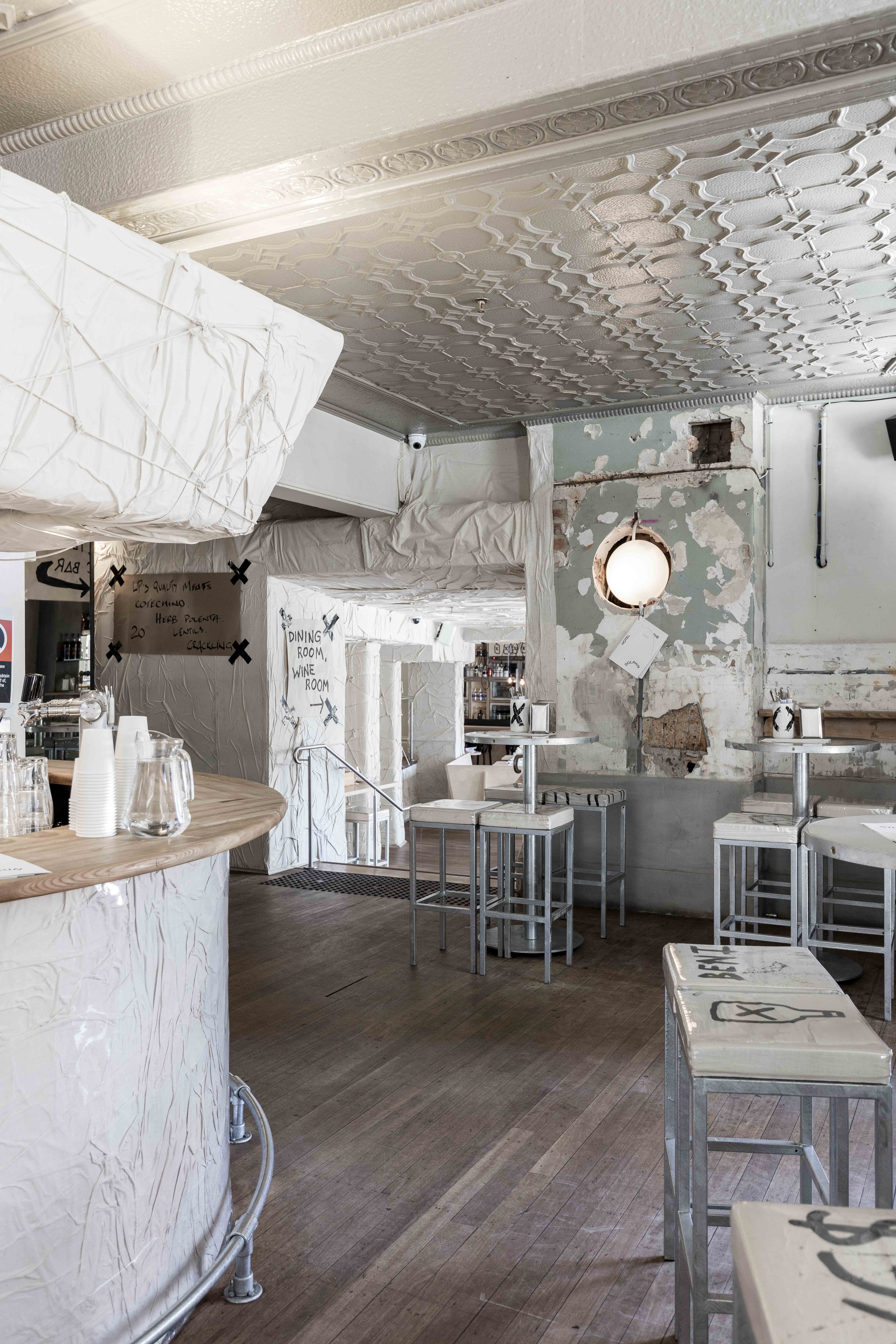 The Dolphin Hotel is a treat. Both temporary and permanent, anarchic and cogent, this bar interior balances diametric opposites in exquisite tension. Originally a series of rooms for a series of art projects, the spaces work seamlessly together, united by a light-coloured palette.

The Dolphin Hotel is successful both day and night, an achievement that is unusual in itself. The effect of the interior has been achieved in an economical and parsimonious way, and the overall impression is of an interior that doesn’t take itself or anything too seriously. Perhaps one of the most important outcomes of the creation of The Dolphin Hotel is that it has inserted itself provocatively into the conversation about Sydney’s lockout laws, as the temporary pop-up that stayed put.

Imbued with an underlying warmth, it is the ideal place to spend an entire afternoon, rolling merrily on into night. The ultimate success of The Dolphin Hotel is that it marries whimsy and discipline, and the result is outstanding. 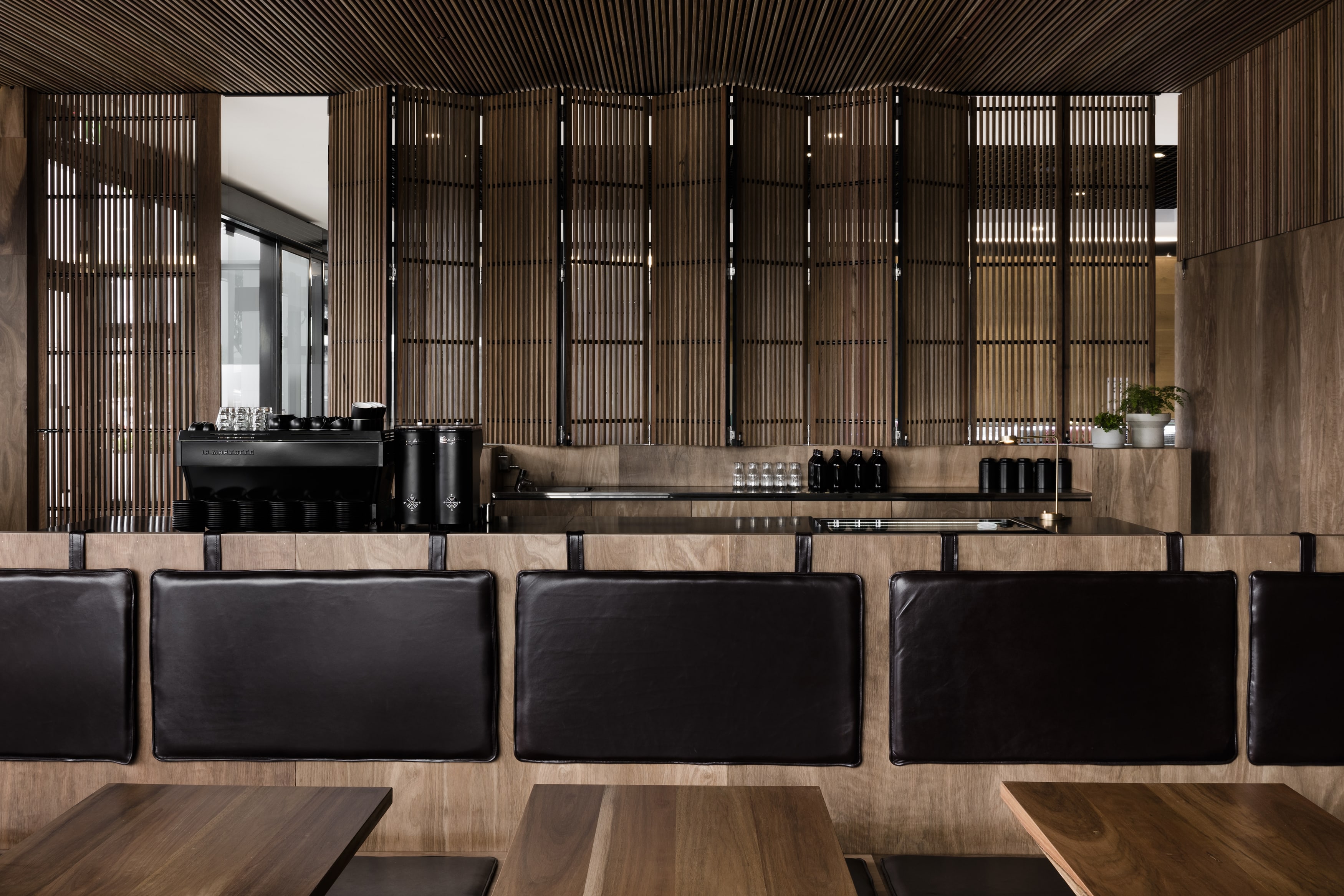 Morris and Heath is a holistically considered interior, bringing high-end design to Melbourne’s western suburbs. The interior successfully creates its own moment, its own place, warm and comfortable with its disciplined palette of wood and strategically placed lighting. All is understated, nothing in this interior is extraneous, and it is one of the most remarkable outcomes seen among this year’s entrants.

The timber panels and battens may not be an original idea, but they have been finely detailed and executed in this application, with such details as the “fingertip” scale of the battens giving tactility and a “must touch” aspect to the interior. The operable screen further multiplies the space – a detail that could have been omitted, but which would have diminished the pleasing complexity of the cafe’s spatial form. As the light changes over the course of the day, the screen is there to operate as a kind of veil. Overall, this is a deeply positive interior, timeless and anything but temporary. 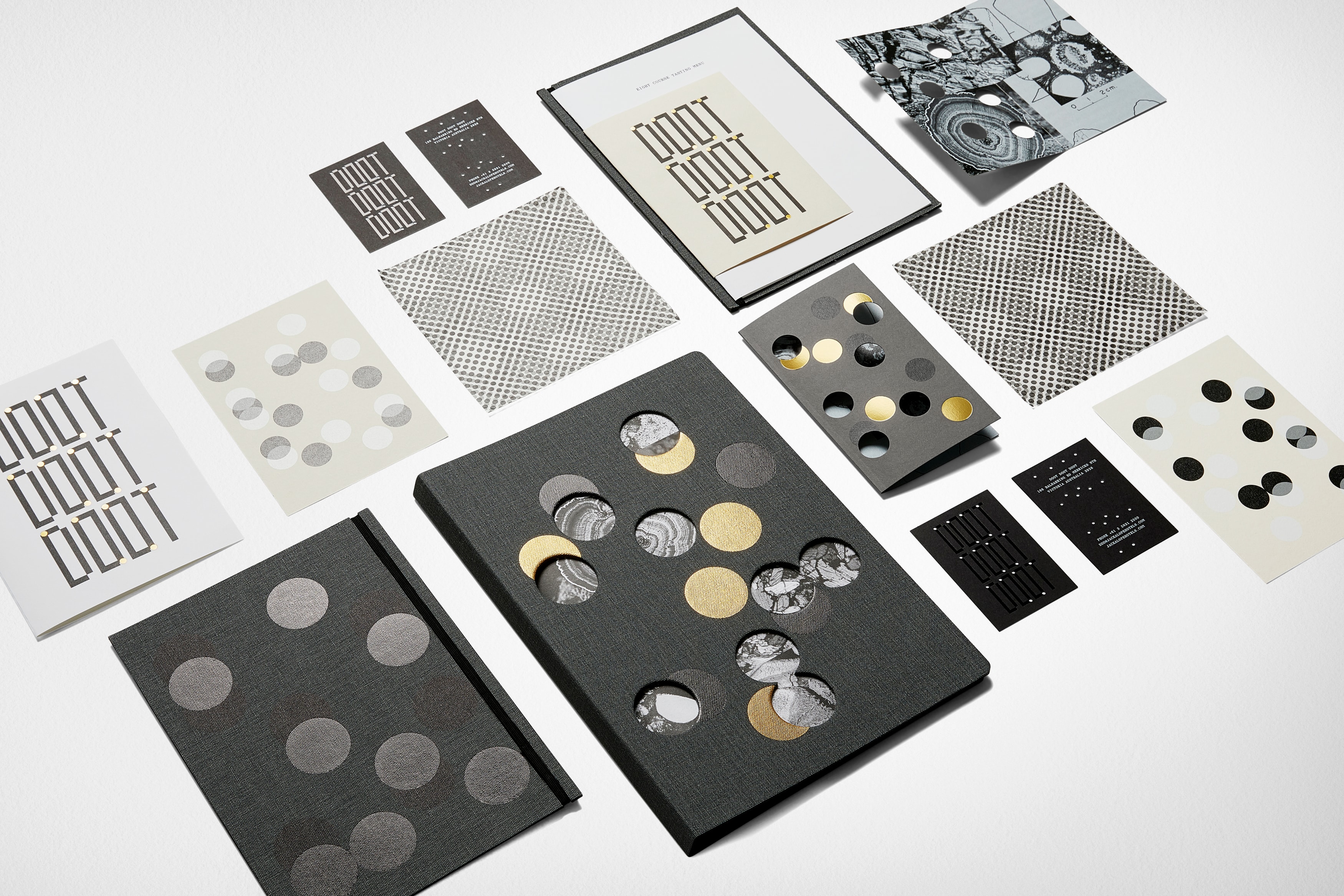 With overtones and undertones of Donnie Darko hovering inevitably around the design, the identity collateral of Jackalope represents an ambitious and boldly coordinated, highly integrated relationship to the interior and venue it supports.

The designers have managed to marshal and occupy multiple channels of attack to create an identity that cascades from supergraphics, environmental wayfinding, door signs and other placards, to menus, paper collateral, typography and uniforms.

The supergraphics in particular highlight the main building, creating a moment of intensity. As the identity reveals itself through the visitor’s experience, it’s evident there is an overall inventiveness to each layer of the graphics. As a highly integrated, carefully considered overall experience, Jackalope is a singular achievement and a clear winner. 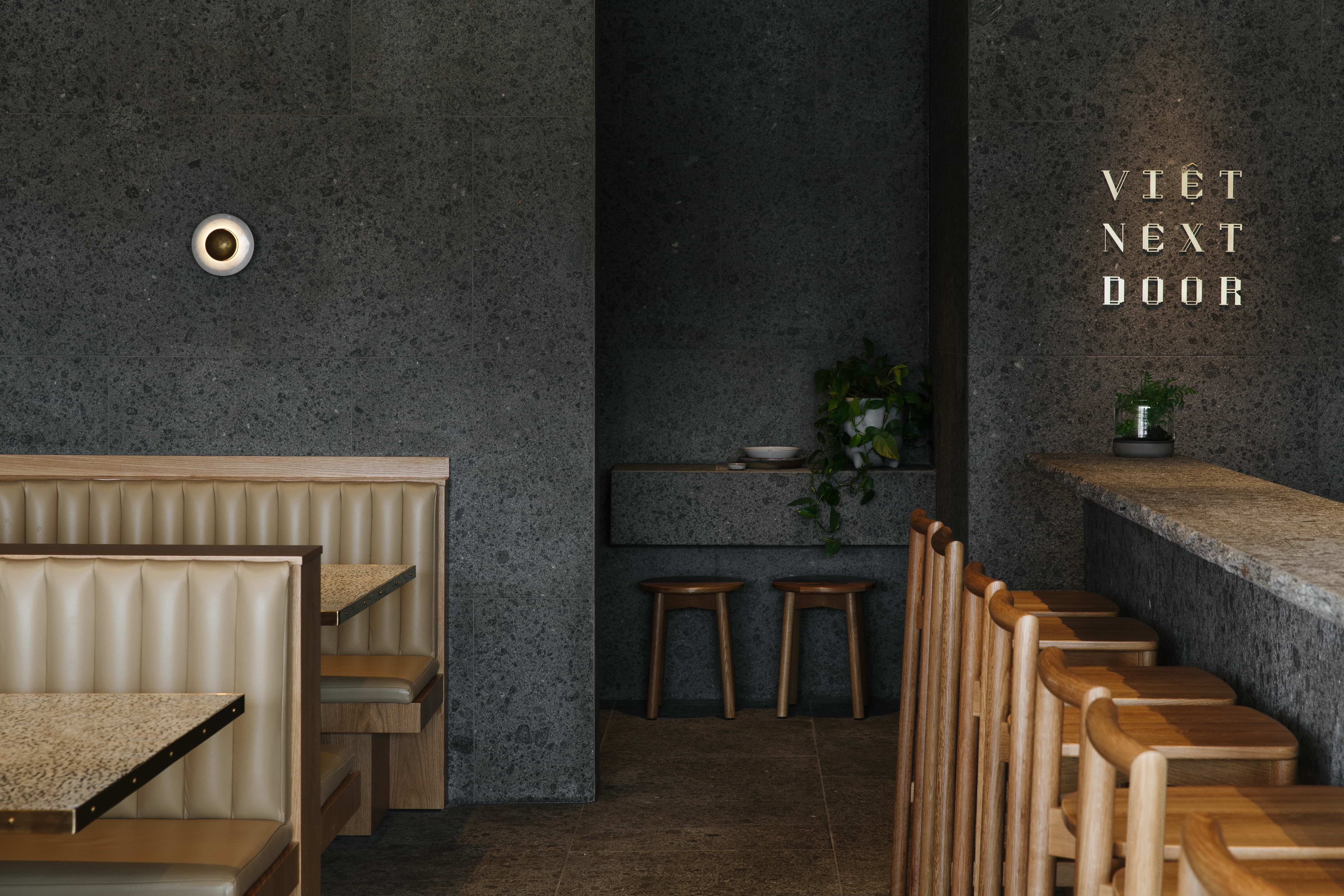 Viet Next Door represents a pinnacle of artisanal crafting and an instance where a great deal of thought has clearly been invested in every detail. It is an impressive and strangely atmospheric interior for all its simplicity. All elements of the interior have been crafted from scratch and exist in delicate suspension with each other, even down to the alignment of the flex and the tension wire supporting the handmade light fittings.

Adelaide has a long history of excellent Vietnamese food and this family-owned business has been taken in a unique and thoughtful direction by its interior. This space is something of a departure from the usual run of family-owned restaurants – it is a place where every detail has been considered and executed in an extremely disciplined way, while remaining highly inventive, playful and rich in attention to detail. 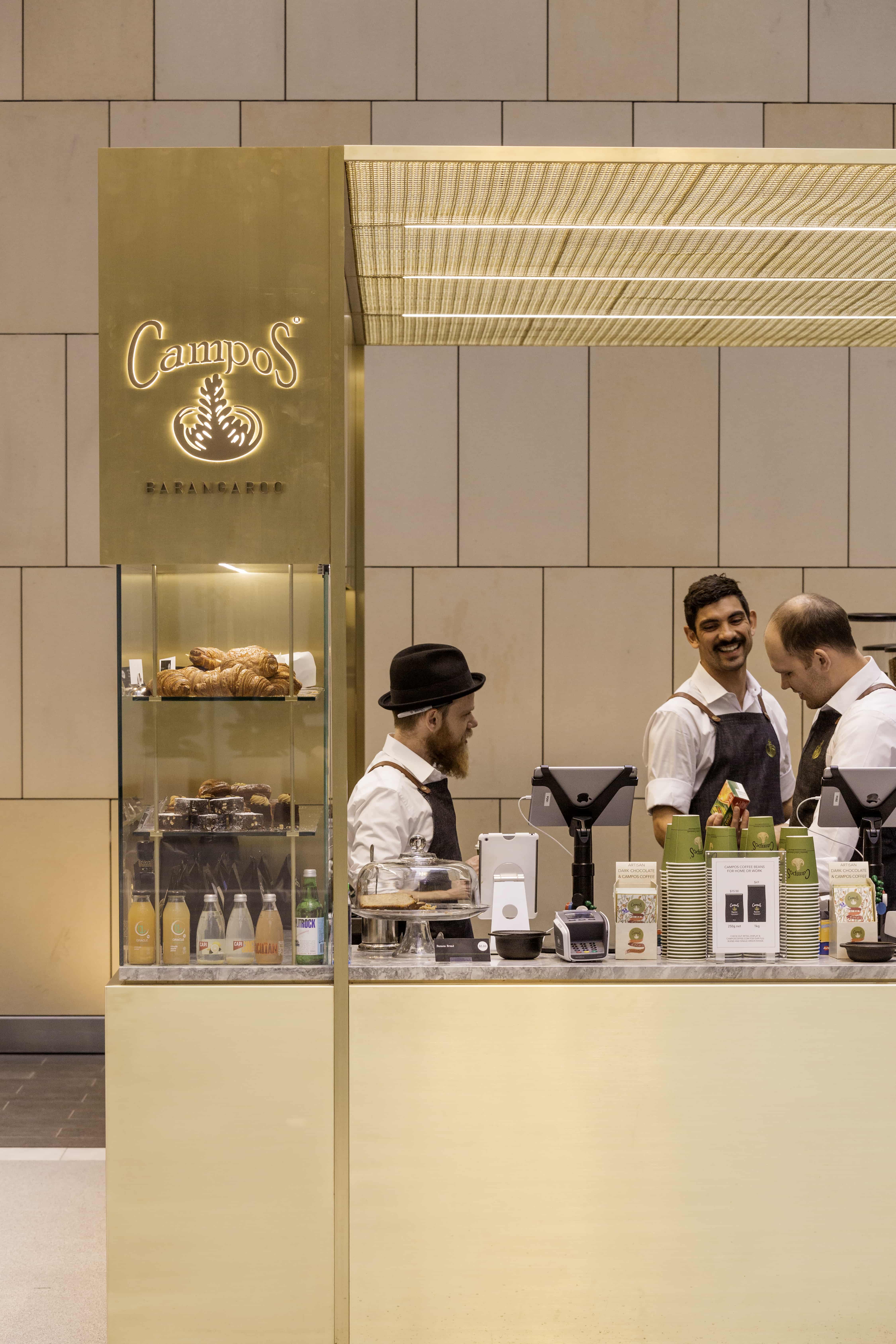 Campos Barangaroo is one of those rare insertions that manages to complete, and thus make sense of, the space it occupies. It stands in rich, and somewhat glamorous, a contrast to the bold sandstone wall nearby, and in harmony with the glass and steel detailing around it, Campos is a glittering “jewellery box” installation, positioned and at home exactly where it should be.

Primarily providing coffee, this brass-finished boxed venue, with woven brass mesh panels, puts a bold foot forward in a setting where some might have opted for a more neutral black, or something similar. More than equal to its materially rich setting, this exquisitely detailed cafe also occupies its chosen space asymmetrically, sitting in perfect tension to its framing surrounds. Campos is uplifting, bright, warm, light and welcoming, and a clear winner. 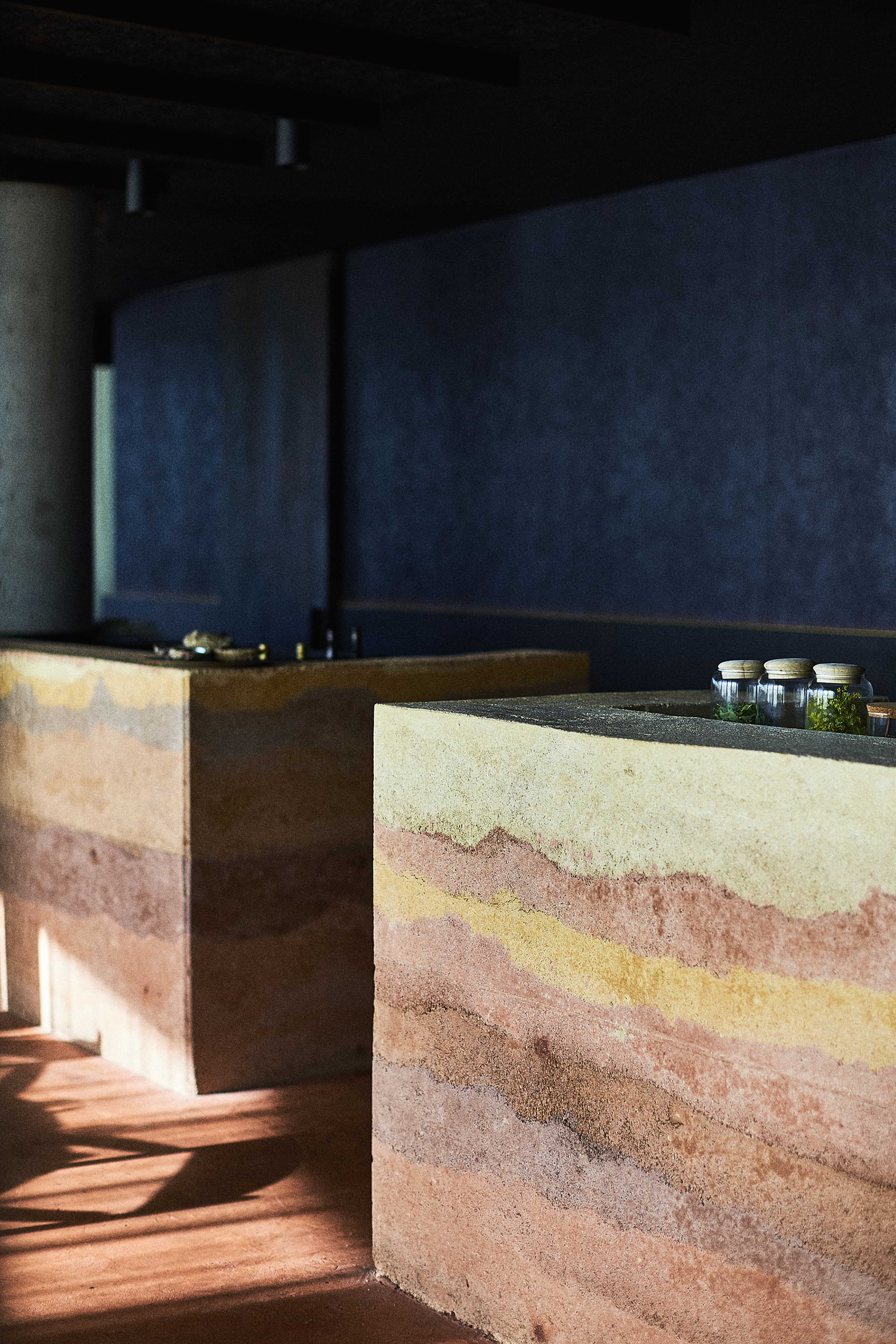 Noma Australia managed to tread that fine line between representative materiality and realization that never descends into “featurism” or mawkishness. With a shelf life of only ten weeks, Noma Australia, through its collaborating creators, managed to embody the best the nation has to offer in terms of “ingredients,” both at the table and in the physical environment. The decision to create rammed earth counters is inspired.

This is a material that is not suited to long-term hospitality use, but ideal for the short-term embodiment of the “earth beneath our feet” concept that reflects this great brown land – materially rich and satisfying, and highly evocative. “Fusion” is a word that’s been used practically to the extinction of all meaning in restaurant design, but Noma Australia truly managed to fuse the best of Noma and the best of Australia in a texturally satisfying tableau, executed with incredible finesse.