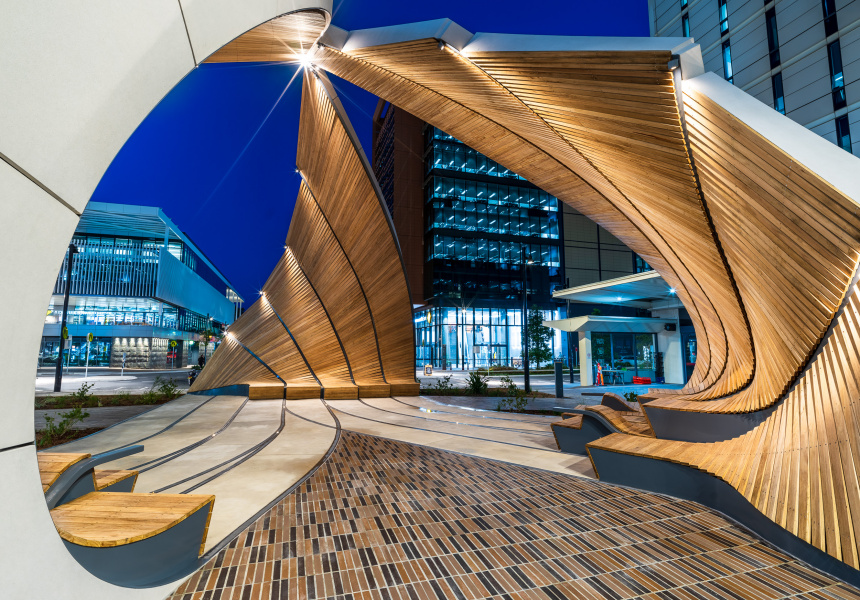 Commissioned by Mirvac and its consortium of partners on the South Eveleigh development, the Interchange Pavilion is an 11 metre tall cusping structure that reference the geometry of the railroad switch: the point at which train tracks diverge and change course.

The rail lines transmitted through the ‘switch’ define tectonic connections between the Sydney rail network and the South Eveleigh site.

“The railroad switch allows for a train to move from trajectory to another. I was interested in the transient state between those two trajectories; the potentiality of movement,” Chris Fox tells ADR.

“The work uses this notion of the switch through the ground plane expressed as tracks crossing, then moving up and over head to create a volume; a meeting place. The work represents an interchanging of paths, of past stories and future journeys.”

This complex materiality was developed through 3D modelling with over 3,200 digitally fabricated elements moved through Studio Chris Fox’s computational workflow

“The artwork took 6 months to fabricate the aluminium sub-structure and the robotically moulded glass reinforced  concrete off site. We were on site for 10 months from initial groundworks to installing the 1400 pieces of hardwood,” says Fox.

As in Fox’s celebrated Interloop installation at Sydney’s Wynyard Station, the Interchange Pavilion makes use of recycled materials.

“Each material is specifically chosen for its performance, aesthetic and its potential to be manipulated into the flamboyant form of the Pavilion” says Fox of the choices.

“Different from Interloop, this project references histories through geometry rather than recycling historical material.”

“The Interchange Pavilion is navigating the functional requirements of an architectural pavilion, while holding the poetic intent of an artwork,” Fox describes.

“The work allows for the transmission of ideas while negotiating the programmatic requirements of a meeting place.”

Founding director of Studio Chris Fox and senior lecturer in Art Processes and Architecture at the University of Sydney, Chris Fox creates large-scale public art installations that interrogate the conceptual and material boundaries between art and architecture.

Melbourne-based startup Fologram used a similar digitised methodology to steam-bend the hardwood for their Steampunk Pavilion at the Tallinn Architecture Biennale in Estonia.