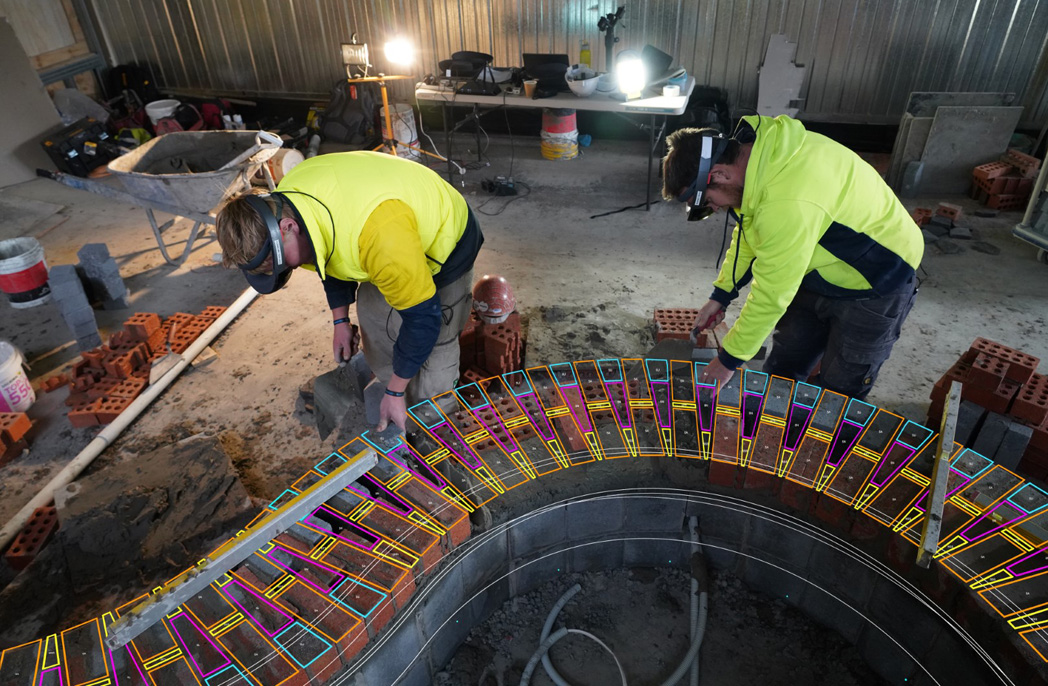 Melbourne-based technology company Fologram have worked with All Brick bricklayers to show the potential of augmented reality (AR) technology to improve the precision and efficiency of traditional construction.

Fusing augmented reality with the physical space, Fologram facilitates the construction of complex designs through digital instructions that are virtually superimposed into the workspace.

The design model is generated through holographic instructions rather than traditional 2D drawings, forming a bridge between design and construction and easing the tension between technology and the human hand.

Fologram’s capacity to stretch design’s limits was on show at the Steampunk Pavilion at last year’s Tallinn Architecture Biennial event in Estonia. Using the HoloLens system, the design team were able to steam-bending lengths of hardwood with precision to create the organic flow of the pavilion’s design.

The Fologram model was put to use in All Brick’s construction of part of the Royal Hobart Hospital. The bricklayers erected a parametric wall using a Microsoft HoloLens headset and a holographic model created by the 3D modeling software Rhino.

The bricklayers built several hundred meters of complex curved benches spread over 6 floors of the hospital without using a printed drawing or template. This is the first time that part of a large, commercial project has been built from holographic models in augmented reality.

The bricklayers embraced working with the AR tools because of its minimal disruption to their normal workflow, with little need for back-and-forth within the team and referencing of architecture plans. This enabled them to work in larger, more efficient and highly skilled teams. The bricklaying team completed the wall in seven hours rather than usual weeks.

New applications for the technology were improvised by the bricklayers on the site, creating holographic tools for templating and cutting bricks, setting out block work, rebar and ties, locating services and scheduling construction.

“The future of construction isn’t being imagined by white collar workers and tech entrepreneurs in hoodies. It’s being actively created by tradespeople, contractors and front line workers who are showing the real value of working with augmented reality on day to day jobs,” says the Fologram team.

The collaboration between Fologram and All Brick illustrates the many opportunities for architects and builders to deliver ambitious designs without having to worry about feasibility, cost and risk.

The holographic instructions for one of the benches from the project is included as a demo with the free Fologram for Mobile app.

UTS is on the frontline of investigations into current and incoming disruptions in the AEC industry. In research revealed late last year, investment in robotics was shown to be vital to Australia’s competitiveness on the architectural world stage.