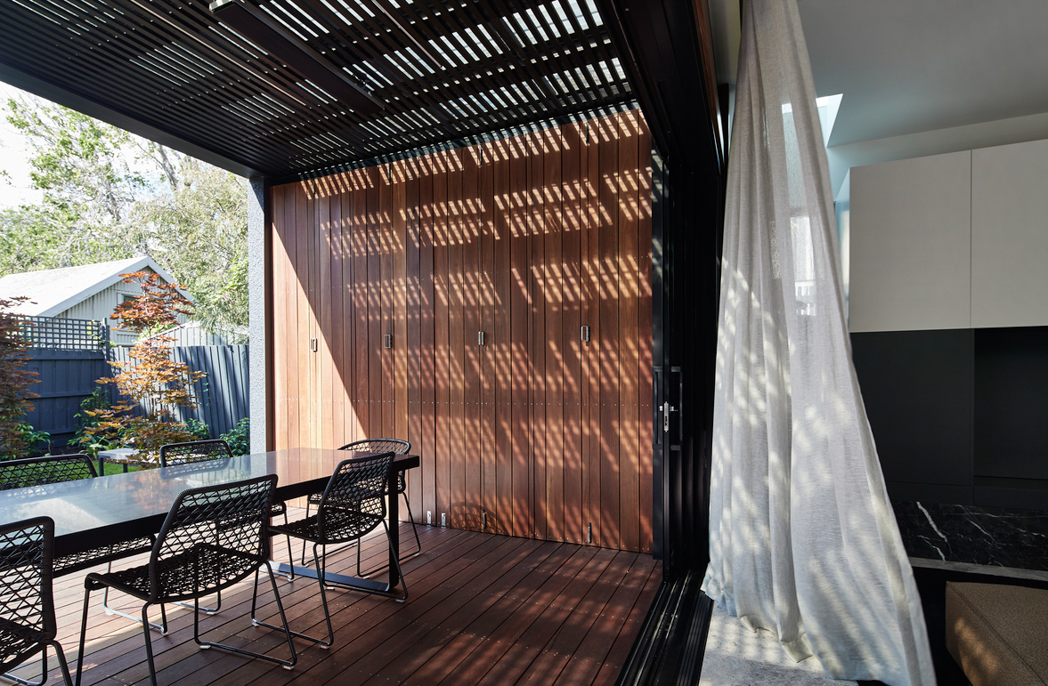 On a tree-lined street in Melbourne’s bayside suburb of Elwood, Star Architecture’s Elwood House effortlessly mixes the old with the new.

On a street populated predominantly with red-brick Californian bungalows and terracotta tiled roofs, the renovation comprises a mix of contemporary and heritage buildings within a council Heritage overlay.

Prior to its transformation, Elwood House was a tired, 100-year-old bungalow in poor condition but with good bones. The client, who valued the history and style of the building, wanted to invest in its retention and restoration. 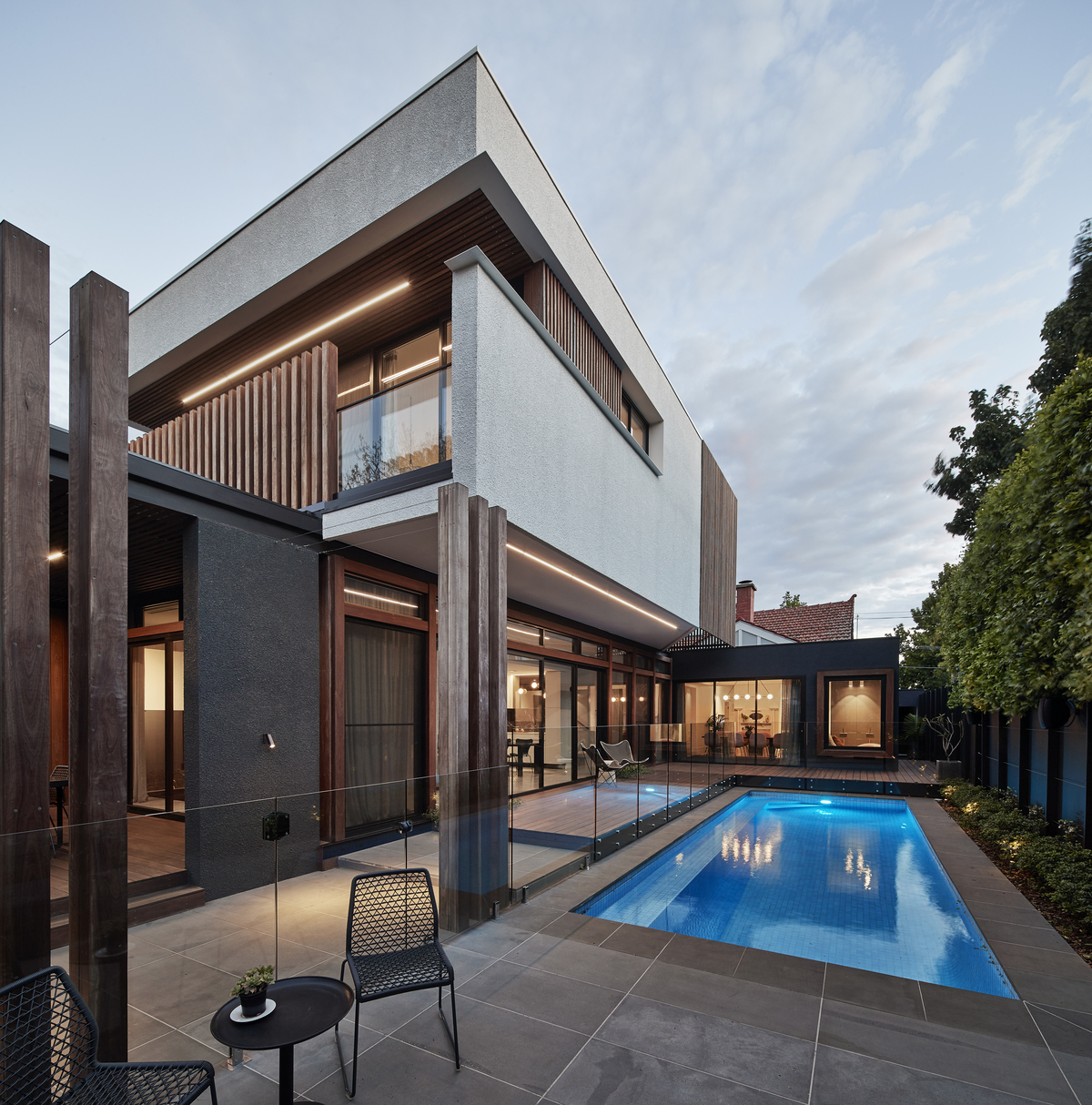 With this in mind, details such as tuck-pointing of façade brickwork, a new cobbled bluestone driveway, reinstated timber fence and formal geometric front garden designed by Lachie Anderson Landscapes were employed, strengthening the heritage fabric of the street.

Demolishing the cramped rear section of the house allowed for a new extension that opens-up and takes better advantage of the north facing back garden. The new ground floor addition, which houses the kitchen and a living space – a streamlined box with floor-to-ceiling glazing, aluminium doors and windows, limestone tiled floor and marble detailing – is juxtaposed with the original house. The transparent box soaks up the natural northern and western light and utilises reflection from the existing pool to further bounce light around the internal space. It is a bright, spacious center for gathering, sharing and enjoying the connection to the garden, barbeque and pool. 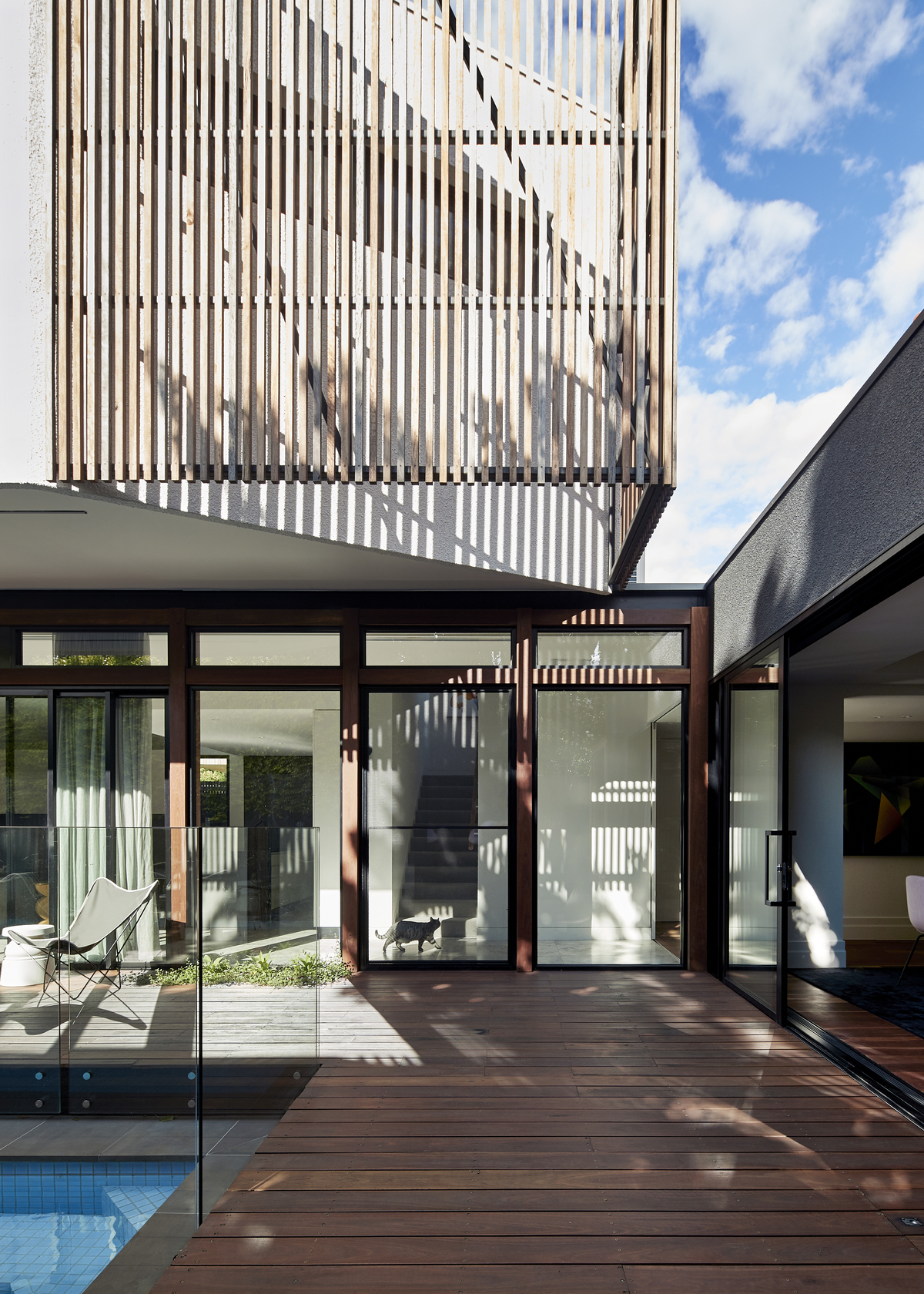 The junction between old and new is distinct but fluid. A central spinal hallway links the two halves of the building with walls extending from front to back in a continuous line, creating a long, framed vista.

The new first floor addition houses the children’s bedrooms is distinguished from the more transparent ground floor as a solid monolithic box. Although solid, the off-white rough-cast rendered box appears to float above the building below and to rise and disappear into the sky. It is offset from and overhangs the ground floor envelope to provide shading below and moderate the bulk of the overall mass.

Spotted gum elements feature throughout the building uniting the two different levels. On the ground floor, new windows are framed with timber, referencing the formal heritage detailing elsewhere. Timber screens are used on the façade of the extension, softening the robust box against the heritage façade.

Interior finishes and joinery were designed with Fiona Lynch. The selection of tactile materials, lustrous finishes, rich colours and sleek detailing complement the architectural forms and add another layer of design integrity to the house. 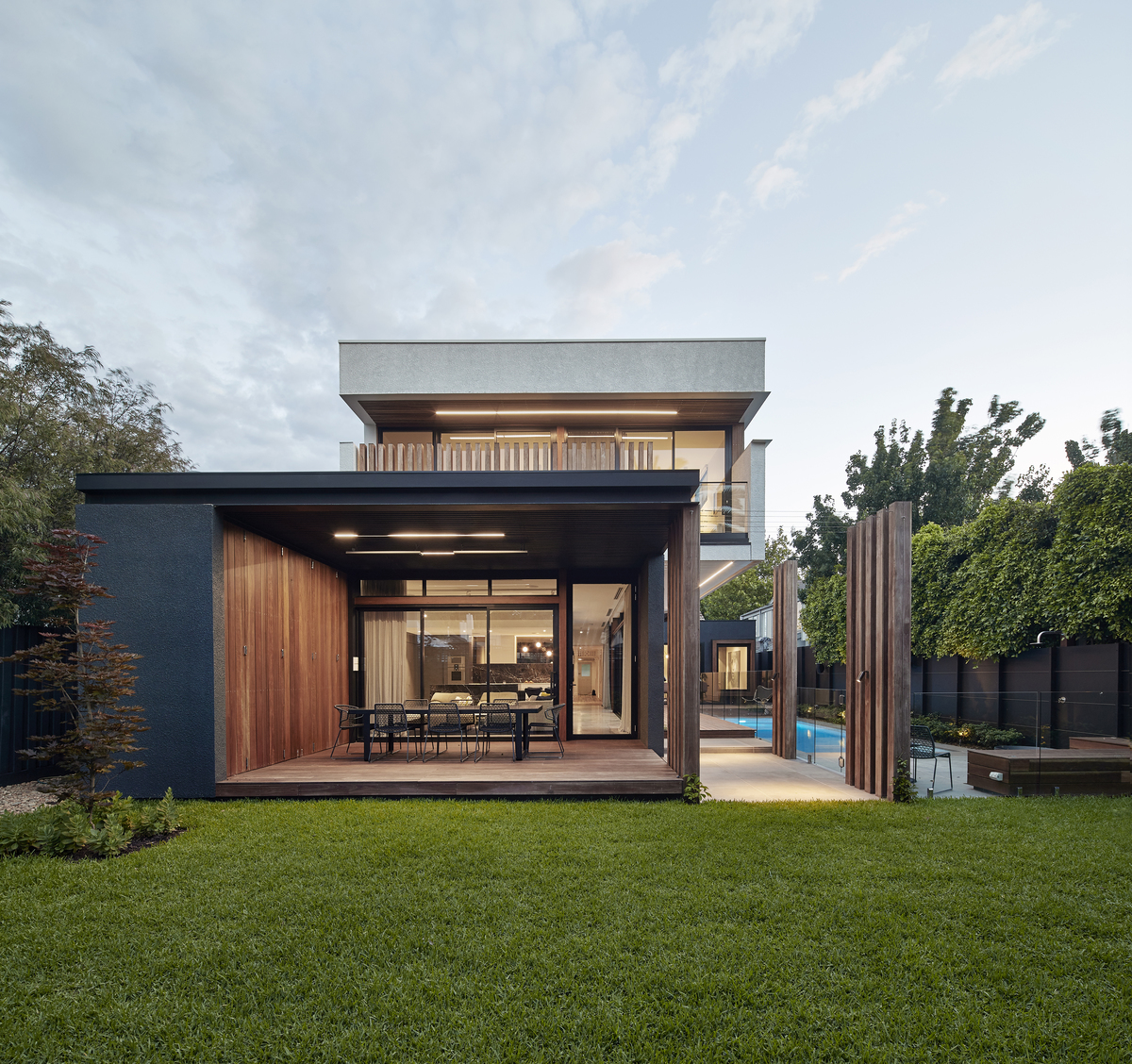 The client’s extensive art collection was accommodated with spaces designed to best present the range of work, further enhancing the building’s character.

Elwood House provides the multi-dimensionality and flexibility needed for a modern family, which is reflected in a range of architectural styles and materials from different eras that have been successfully integrated as an elegant, contemporary home.

The extension is respectful of its neighbours and the streetscape; it is not prominent from the street front – there are only glimpses of a modern box behind, modestly set back from its neighbouring buildings. 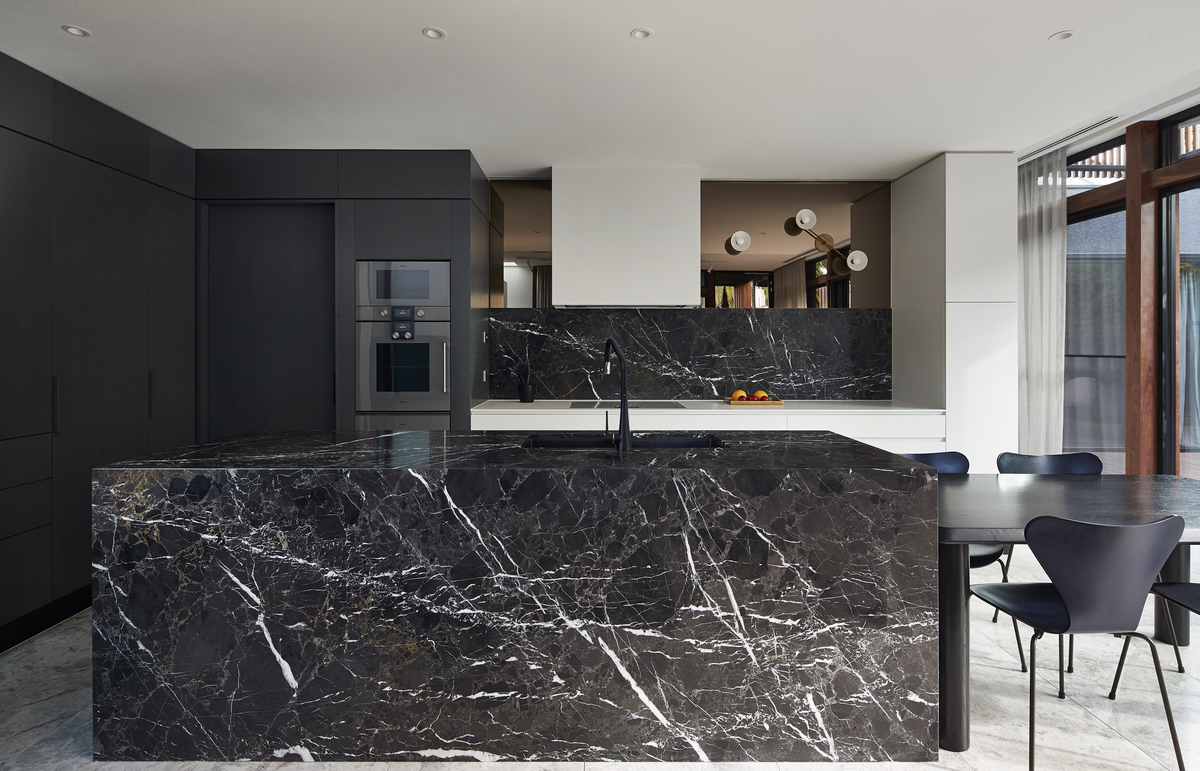 Energy use, solar access, thermal performance, ventilation and water-sensitivity have been considered at all stages of the project to create a house that aims for self-sufficiency and a harmonious relationship with its surrounding landscape. Despite its elegant design credentials, the house is still primarily a home for a young family and links with the daily life of the other parents and children in the neighbourhood.

Star Architecture is based in Northcote, Melbourne.

Treading the line between contemporary and homage in Melbourne

Lessons in light and space in Enmore, Sydney