Home • Interiors • Treading the line between contemporary and homage in Melbourne 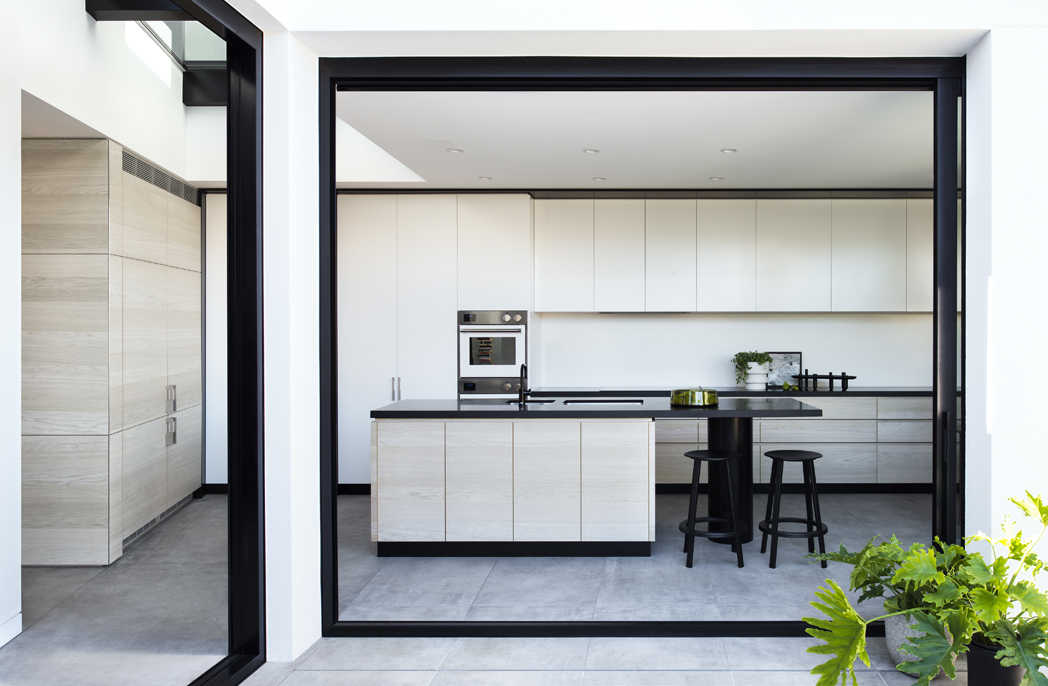 Treading the line between contemporary and homage in Melbourne

Co-editor of inside Gillian Serisier discovers how a Heritage home of architectural and cultural significance embraces the fine line between contemporary and homage.

There is a breathtaking simplicity to the layout of the original home, with two grand rooms stacked above two others, while all the utilities, including bedrooms, have been pushed to the rear. Designed by John James Clark (known as JJ Clark) in 1869 as his own home, this house presented significant Heritage pressures to maintain original features, and SJB worked with council and the Victorian Heritage Registrar for two and a half years to ensure all parties were satisfied. As SJB director, Interiors Andrew Parr explains, however, there was also a strong drive within the practice to pay respect to this forefather of Melbourne architecture. 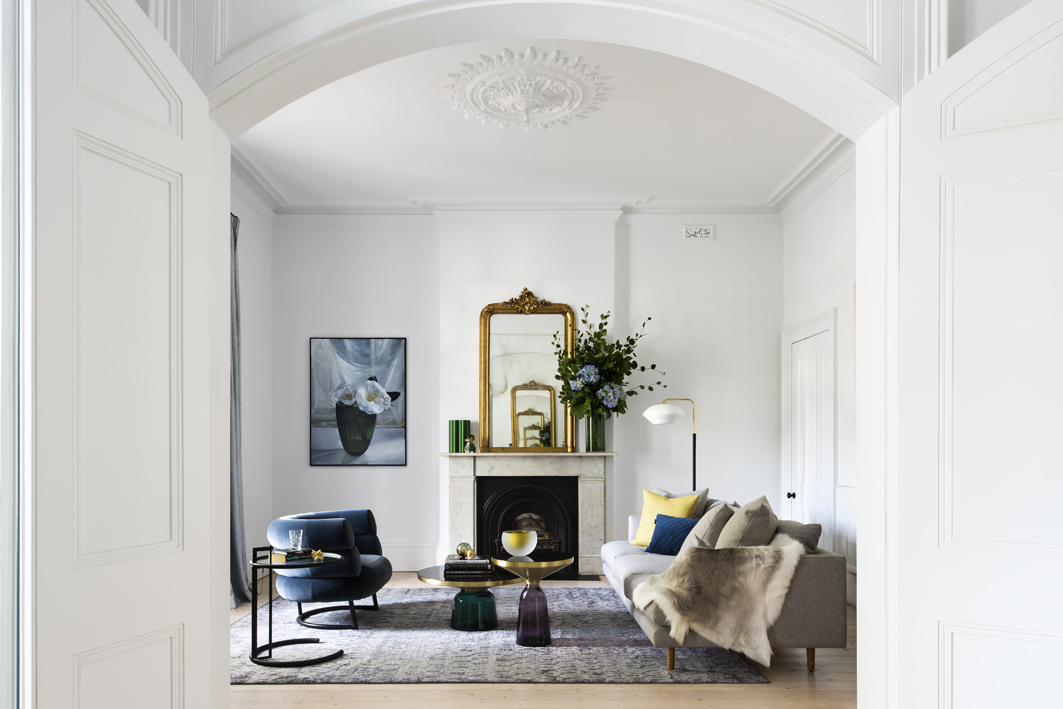 “It’s quite an unusual design, built like a townhouse with detail expressed in unusual ways and we wanted to make those qualities of both detail and structure evident,” he says. Active in Australia from 1856 to 1904, JJ Clark is noted as the architect responsible for many of Victoria’s public buildings and a great many others across New South Wales, Queensland and Western Australia.

The house then is an anomaly within his oeuvre as one of the very few residential projects he undertook. This is compounded by the house being his own home. Designed for all of its grandeur to be front and centre, the front portion has magnificent four-metre ceiling heights. Conversely, the bedrooms and kitchen are, while still housed in two storeys, squeezed down to 2.4 metres. In effect, the back portion is somewhat like a lean-to with a corridor for the laundry following behind. Spatially, the SJB design has rearranged these back spaces and, while removing an octagonal 1980s addition, has created a complementary extension that echoes elements of the historic portion without mimicking. 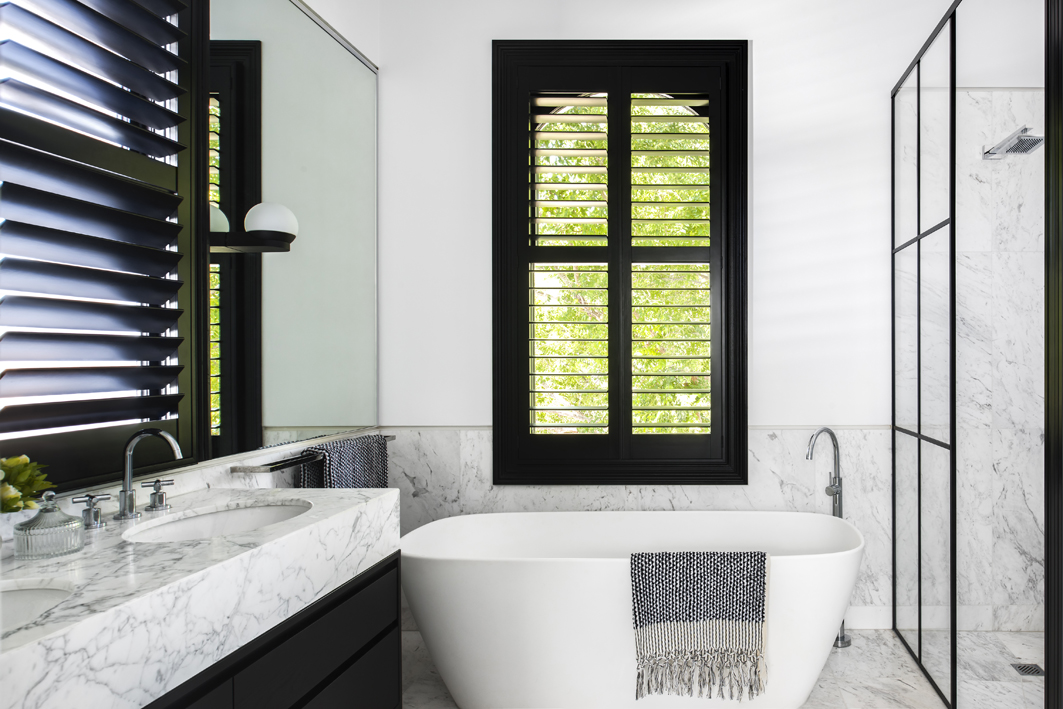 As such, the upper floor now transitions from the grand upper rooms to a study and from there to the two bedrooms in the new extension. On the lower floor, a casual lounge has been created that incorporates the original kitchen fireplace (now restored). The external corner of the maid’s quarters was of particular Heritage significance and as such has been incorporated into the interior of a sky lit corridor. The solution fulfils Heritage requirements on several levels, but it is the experience of being able to see the back façade of the building and therefore contextualise the corner’s position, that most impressed the Heritage authorities. 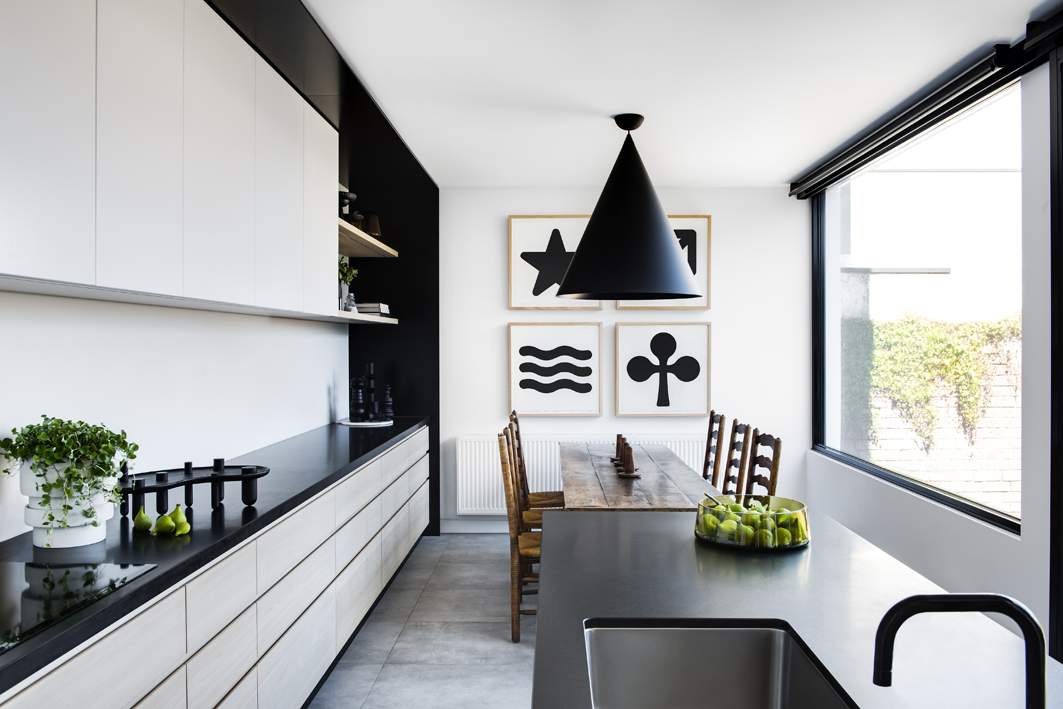 Taking the breathtaking cue from the architecture, the interior design is similarly stunning in its simplicity. Heritage set the exterior as white and Parr felt a white interior was a fitting response. “It was important to express the fact that it is an old house with nothing busy or fussy and, besides, I like the freshness of white,” says Parr. To this end, the all-white interior has been further softened by the original floorboards being lightly sanded and lime washed to a milky white overtone.

The original details, mouldings, architraves and so forth have been visually softened to read as relief rather than contrasts, which in turn has re-established the grandeur of scale inherent to the huge curved bi-fold doors separating the upper rooms. “There is a lovely European quality to the French doors,” says Parr. “They are enormous – it’s quite romantic in a way, like New Orleans with those tall, tall doors. It is a different quality to most Victorians.”

Connecting lower and upper floors is a hall and staircase. “The staircase had been knocked around so much we couldn’t find the original colour, though we did find some reds. We were able to bring it back and use black Japan as that ‘may’ have been used originally,” says Parr, explaining the kind of Heritage restrictions the project entailed. That said, the delicate line of the staircase picked out in black is a beautiful resolution. This is enhanced by the addition of a grand chandelier, rendered delicate by the four-metre ceiling height and vertical line
of the stairs. Furniture, while wholly contemporary and in a deliberately muted shade, is similarly delicate with an air of weightlessness. “There is a sense of lightness to the furniture: nothing hits the ground, everything is off the ground,” says Parr. 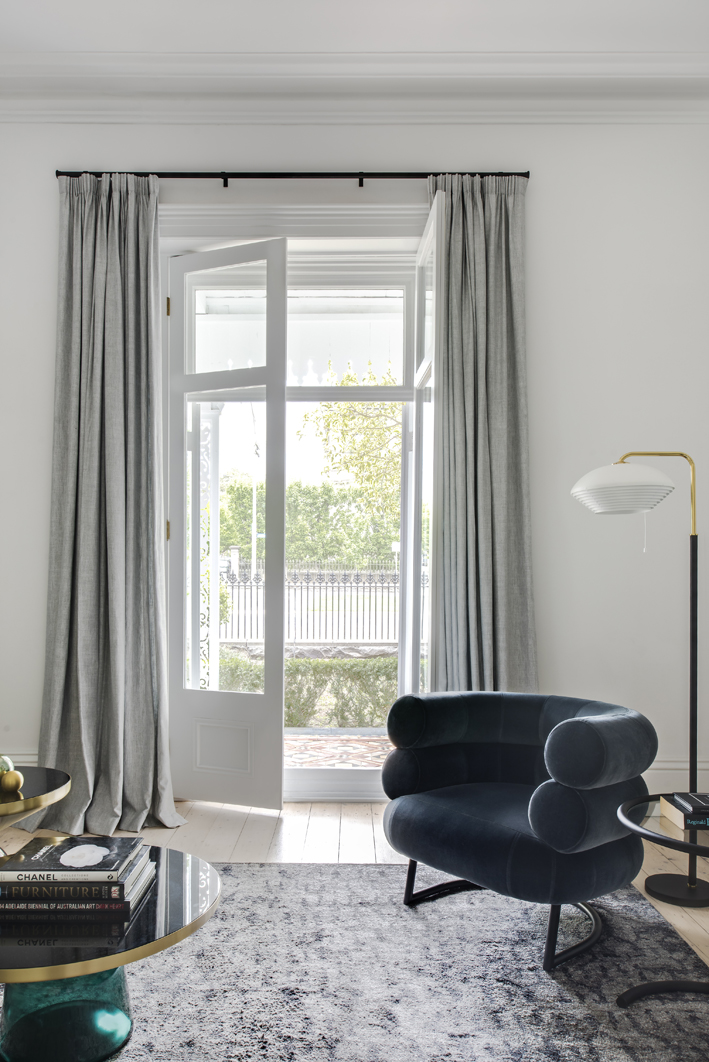 The ClassiCon Bibendum armchair in petrol blue, for example, touches the ground in a gentle arc, as does the ClassiCon adjustable side table, while the Bell coffee tables’ glass legs express this lightness through materiality (all Anibou). The Nook sofa (Jardan) is similarly light-footed with its sumptuous expanse hovering above narrow feet.

Conversely, the extension has a more robust nature with the island and kitchen bench defined by solid expanses of jet black granite (Apex Stone), while cabinetry is minimal white and bleached oak (cool white, George Fethers). A Wastberg conical pendant (Euroluce) in black adds a dramatic element, which is picked up in the owner’s geometric prints. Floors of urban grey ceramic (Artedomus) further soften the palette. Tonally, the whole echoes the older volume without mimicking any of the Heritage elements. The bathroom continues this line of thinking with lovely solid expanses of Volakis (Signorino) paired with black cabinetry (stained American oak) and black steel framing of windows and shower screen. Volakis stone floors continue the rich materiality, while a curvaceous bath adds sculptural form (Contura, E&S Trading). 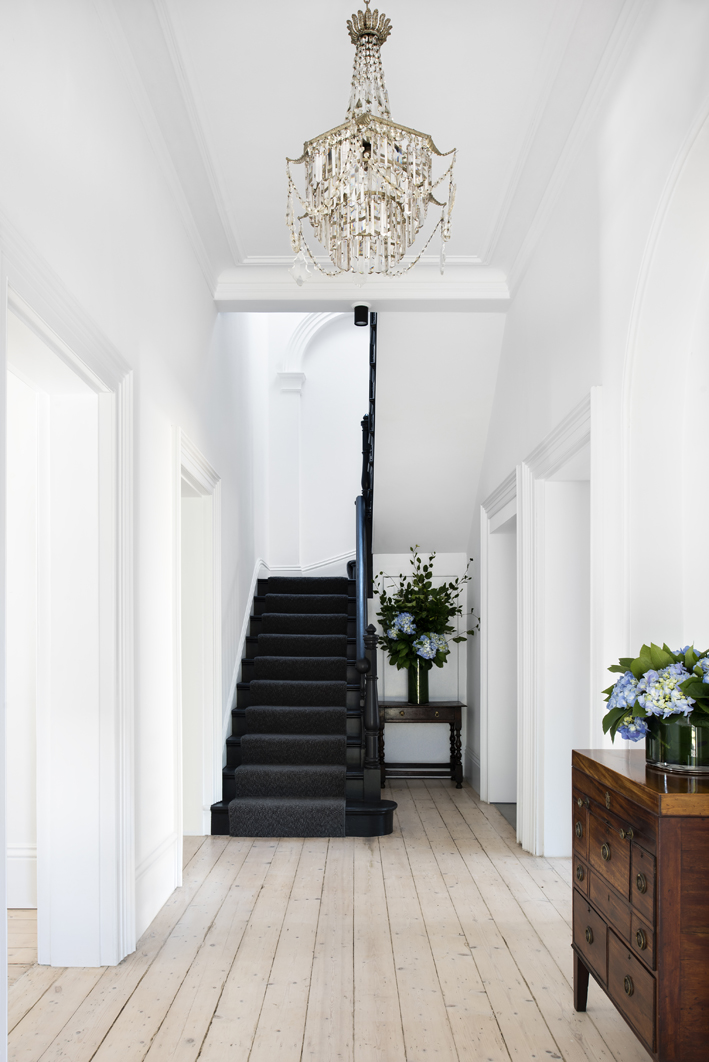 Black shutters add to the drama in the interior, while the exterior shape and distancing of the windows is the same as the exterior of the Heritage house. The lounge area brings colour into play via a washed teal rug (Behruz), cushions and art, while the black and white dialogue is extrapolated via a Lady armchair (Space). The overall effect is of a continuous rhythm that naturally flows from old to new, while integrating both portions. 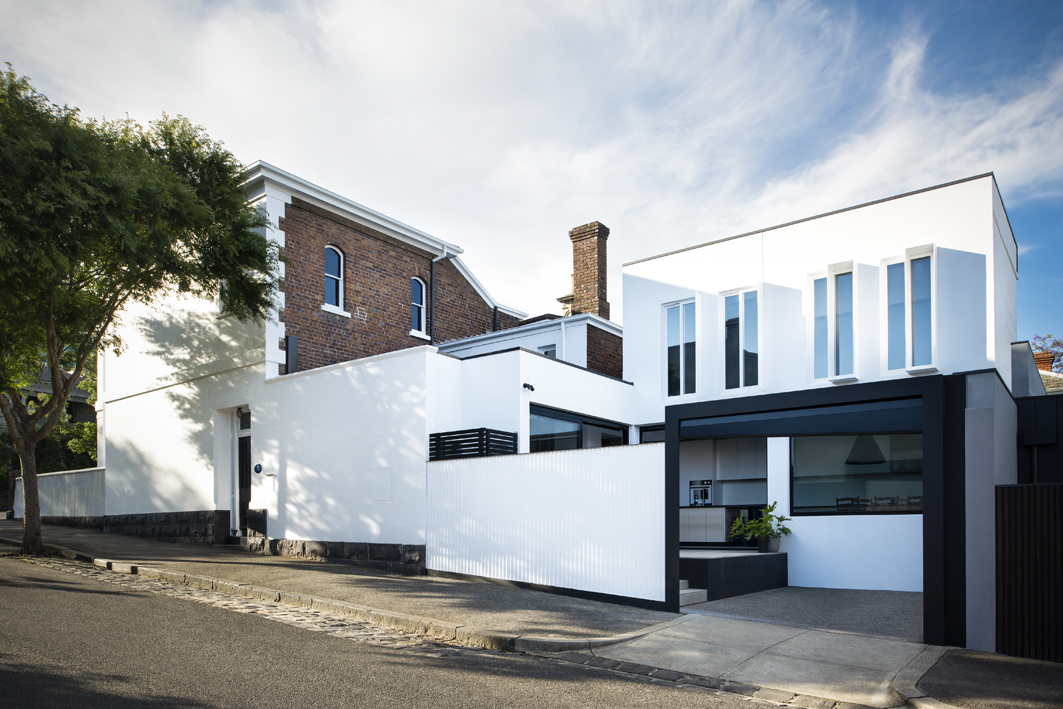 Creating a contrast between the old and the new, as Parr points out, isn’t new. What makes this house gorgeous then is the way the interior treatment has allowed the old to read as an old house. Floors have been touched lightly enough for their scars and history to be legible, while the ornate detail has been retained but muted in a palette of white. Moreover, the echoed palette allows the extension to fit without feeling like an add-on or afterthought. It is, however, the full realisation of those incredible four-metre tall French doors that make this house as truly magnificent as JJ Clark originally intended.