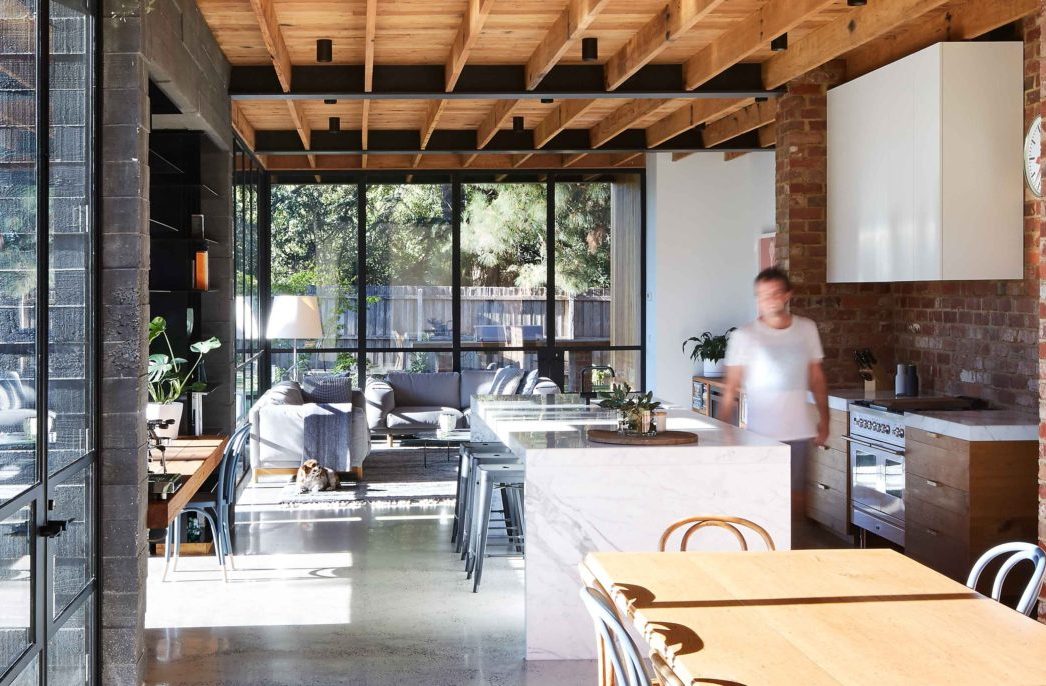 Better the second time around

We take a look at why an increasing number of people are choosing to use recycled building materials in their home renovations – and it’s nothing to do with price.

When Troy Clark of architecture practice tenfiftyfive drew up plans for an extension to his family home, bricks were chosen mainly to moderate the internal temperature. At the time, he had little idea how important they would become to its overall aesthetic.

With a patio comprising four-palettes-worth of recycled red brick that needed to be moved to make way for the extension, Clark used it in the build, along with some additional recycled bricks from a Melbourne supplier.

The intention had always been to paint the internal brickwork white. Once in place, however, Clark made the rather easy decision to leave it unadorned – save a coat of BondCrete to prevent dust.

“As soon as the walls were built, we couldn’t do it,” he tells ADR. “I knew if I painted them I could never go back and I simply couldn’t do it. They looked too good.”

Clark is not alone in his appreciation for recycled products, and in particular Melbourne’s ubiquitous red bricks, with which so much of the inner-city was once built.

And it’s in part this historical link that’s led to an increase in using recycled building materials. As multi-storey developments take over swathes of Melbourne’s inner suburbs, people are retaining a link to the past through repurposing old building material.

“Red bricks are quintessentially Melbourne,” says Clark. “And the old red bricks look much better than new ones – complete with plaster dust, the odd painted brick, damaged bricks, and bricks with pencil writing on them.”

It’s not just recycled bricks that are finding favour with architects and their clients. The salvaged blackbutt used for the ceiling beams and ceiling lining and much of the cabinetry and the benches in Clark’s family home renovation is from the Richmond Air Force Base in New South Wales.

Recycled timber is also a major design feature of another of Clark’s recent projects. The ‘Corner House’ makes use of ironbark salvaged from Sydney’s Pyrmont wharf.

Needing to raise the roofline, the ironbark slabs were used in place of steel beams and supports.

“The decision to use the ironbark was an easy one. All we needed to do was stand it in place and it was done. The sections are heavy enough they provide the full structure to support the roof and we did not need to do anything to finish them. It adds an enormous amount of character to the house and lifts what might otherwise be a simple and dull steel structure to support the roof.”

Instead, the ironbark transforms a basic structural necessity into a salient design point.

“I loved the idea of the rawness and robustness of the material. Here is a massive timber section that has lasted 100-odd years as a wharf and now it’s repurposed as the main structure of a house complete with notches and checkouts from its previous use,” he says.

Clark says he is using recycled material in his designs because of its character and for the added advantage that it is already seasoned, making it more stable than new products.

Ben Callery is another Melbourne-based architect who is seeing increased interest in using recycled material.

“There are a lot of reasons that we and our clients like to use recycled materials,” he tells ADR. “Partly it’s the inherent warmth, tactility and character that comes with age. Partly because of the history that comes with an old material, its story from a previous life and the feelings and memories that it can evoke within us. And underlying all of this is the ethos of minimising waste and reusing materials, from an environmental point of view.”

Callery’s practice is concerned with delivering sustainable building designs. And while this means a focus on passive solar design, natural ventilation and thermal efficiency, Callery also embraces the use of recycled materials as well as building onto and around existing structures, rather than knocking them down and starting anew.

“The concept of sustainability is such a complex thing encompassing energy and water use, thermal efficiency, material use and waste minimisation and social sustainability,” he explains. “Using recycled materials can be a key part of our approach to design because it involves reusing materials that have already been produced and so we are saving on the embodied energy in our buildings by not producing new materials for that purpose. We are also minimising landfill.”

He points out there is a belief recycled material is a cheaper option, which isn’t always the case.

“The amount of labour required to carefully remove a material from an old building for reuse in another isn’t cheap.”

This, however, doesn’t deter people choosing to preserve the past when renovating. Callery points out that often clients choose to fix up and extend a house rather than knock it down and rebuild, even though this can be the more expensive option.

“We often recycle a whole building in that we keep the front half of the house and restore it while putting a contemporary addition on the back. Keeping the front has benefits in terms of the embodied energy saved, its contribution to the streetscape and the memories retained in it. So, often our clients want to keep the front half of their house, even though it will need lots of costly work to restore it, because of the emotional attachment to it.”

One of Callery’s clients requested their kitchen be relocated to fit into a reworked layout for the house.

“The clients had an emotional connection with the kitchen because they had made it and its beautiful jarrah benchtop only 10 years earlier. They and we, also liked the idea of reusing it from an environmental point of view. So we pulled the kitchen apart, reconfigured it and put it back together with the addition of a few floating shelves to match the old ones.”

Ever considered how our technology and devices can be recycled? Read about the dawn of the microfactory.

We are shortly going to be demolishing a 1940s red brick home in Melbourne to make way for a new build and would dearly love to recycle the bricks to use in the new house – but can’t find anyone prepared to do this for us! Any tips on companies who will do this in metro Melbourne?

Hi Rebecca, we checked with Troy (who’s quoted in the article). He had the following advice: “Companies like Paddy’s bricks or any of the recyclers will take them away for free and clean them to sell. All we have done in the past is called them and they drop pallets off for you to stack them. I am sure you could work out a fee with them to clean bricks and return them or swap them over for stock they have.” Good luck!

A climate-efficient supermarket that generates more energy than it consumes

Not the last straw