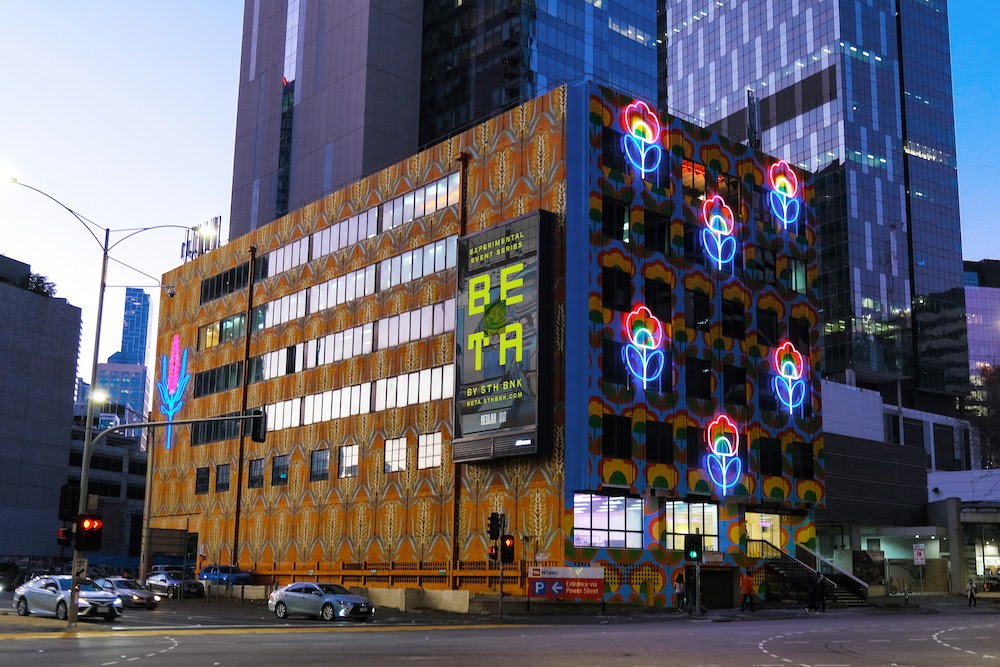 Art and Melbourne are unanimously one with laneways and inner-city streets adorned with murals. Rising artist Atong Atem’s new dramatic piece is the latest in the city’s creative expression.

Situated across two faces of Beulah House on Southbank, the public artwork is a dichotomy of painting and LED neons commissioned for BETA by STH BNK.

The project is part of an event series designed to showcase international brands, artists and makers, immersive dining and much more over a six month period.

It’s being pitched as a “taste of what’s to come” when Beulah’s $2 billion-plus project, STH BNK By Beulah, is completed at the site.

Soon to be Australia’s tallest building, the tower will boast fully integrated vertical villages, drawing together leading figures in design and placemaking with pioneering creative collaborators.

Atem’s piece, titled Outside Living, is inspired by her vision of Melbourne’s past and future, drawing from her archive of colonial and vintage European wallpapers.

The Ethiopian born, South-Sudanese, Naarm/Melbourne-based artist uses the design to explore her relationship with Melbourne while forming a sense of belonging and place.

Alongside illuminated neon tulips, the facade features a 8.5 banksia by Electric Confetti. Drawn from the ‘Banksia marginata’, also known as a silver Banksia, it references the flowers that grow along the Merri Creek Trail, which runs through the northern suburbs of Melbourne.

The flowers on the City Road facade, on the other hand, are a reinterpretation of a tulip wallpaper design from a vintage store in nearby Preston.

“I’m interested in the aesthetics of 1970s Australian homes, and have chosen to reference the intimacy of those spaces by creating a wallpaper pattern reminiscent of late 20th century walls,” Atem explains.

“Neon has a long history in pop and conceptual art. Using LED new technology enables a more sustainable way to invoke nostalgia for this classic imagery.”

Signifying a milestone for Australia’s art capital, this marriage of past and future is the first of a series of design initiatives in the works over the next six months.

“We are thrilled with the end result. It’s bold, exciting and fresh and has really helped transform the cityscape in Southbank,” concludes Beulah executive director Adelene Teh.

You can catch Outside Living at 158 City Road, Southbank, Melbourne.