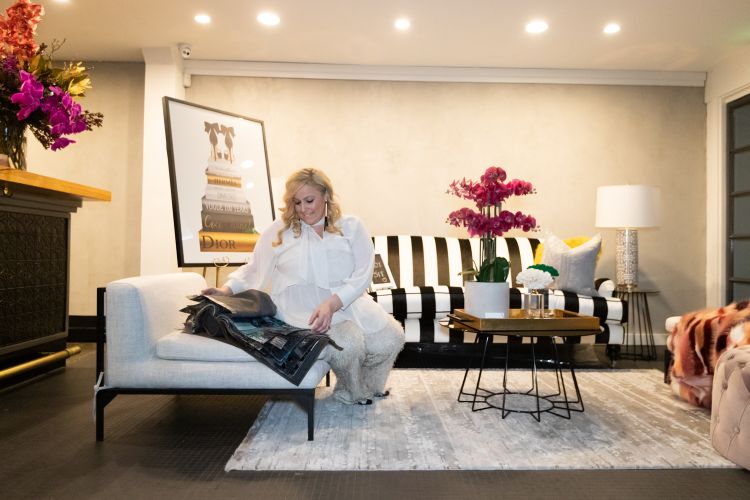 “Always have a desire to keep learning” – Anna Giannis

Anna Giannis, a Melbourne based textiles and interior designer, uses her eclectic style to design high-end residential spaces in the eastern suburbs.

As a child, Giannis had an eye for interior design, constantly rearranging things and moving ornaments around when doing the dusting.

At 28, after five years in a marketing role, Giannis decided to change career and pursue her passion for interior and textile design.

She enjoys working with colour and interesting, antiquated architectural spaces to bring a space to vibrant life.

After an apprenticeship with MYER Design Centre, she opened a studio in Richmond and began working on small projects and textile design.

Giannis describes her style as an “eclectic fusion of neo-classical and contemporary.”

A self-proclaimed “chameleon in the design sense,” Giannis loves to mix materials and styles when working on a project.

Giannis loves working on 16th century Palladio-inspired architecture with a neo-classical element, which can be found as an influence on some Edwardian and Victorian era Melbourne suburban homes.

Giannis says she is “not a purist of one particular design style” and that unless a client wants one specific theme of design she will tend to “mix her styles in a space.”

Giannis tries to avoid enforcing her design style on clients, instead bringing her taste to the table and working with each different client to create a tailored and shared vision.

When designing a space for a client, she will meet with them first to understand where they want their vision to go, before presenting her own options and collaboratively landing somewhere allowing the design process to begin.

“As a designer you have to constantly have new ideas,” says Giannis , so she continually immerses herself in arts, galleries and buildings to maintain her sense of creativity.

Giannis loves to work closely with everyone involved in the design process including the client, trades and builders.

As someone with an interest in textile and architecture design as well as furnishings, she enjoys being involved in every step of the design process, if it’s a renovation or just a makeover.

She says that although the job is stressful she “loves the adrenaline” and tries to make the experience “as fun and stimulating for clients as possible.”

Giannis approaches all projects with an open mind and advises other designers to “always have a desire to keep learning.”

She says to be “open to working with everyone, from there the possibilities are endless.”

Giannis has been working on primarily high-end Melbourne homes for the last 10 years, after working on various projects in Shanghai, New York and Dubai.

She says it’s “important to understand the culture and background of where you’re designing.”

Specifically on her work in Shanghai, Giannis says that she was “constantly mindful” of the various differences in design techniques and styles between her Australian background and Chinese design philosophies.

She worked hard to gain a knowledge of different design trends and regulations including uses of colour and can still speak proficient mandarin.

Because “no one culture is the same,” any global differences add “another ingredient” to her design specifications, says Giannis.

During her time in New York Anna created a homewares line with Macy’s and also had a showroom on Fifth Avenue.

She is currently working on an Edwardian home featuring a pink onyx fireplace, and a French Square home that will be completed in the next few years.

Later in 2021, Giannis will be releasing her book detailing her life as a female in the global design sector.

“Design is like a chain; and you need to be connected to it because then it can take you all over the world.”

We recently got to know interior designer Chelsea Hing and chatted about her design approach in a post-COVID world.