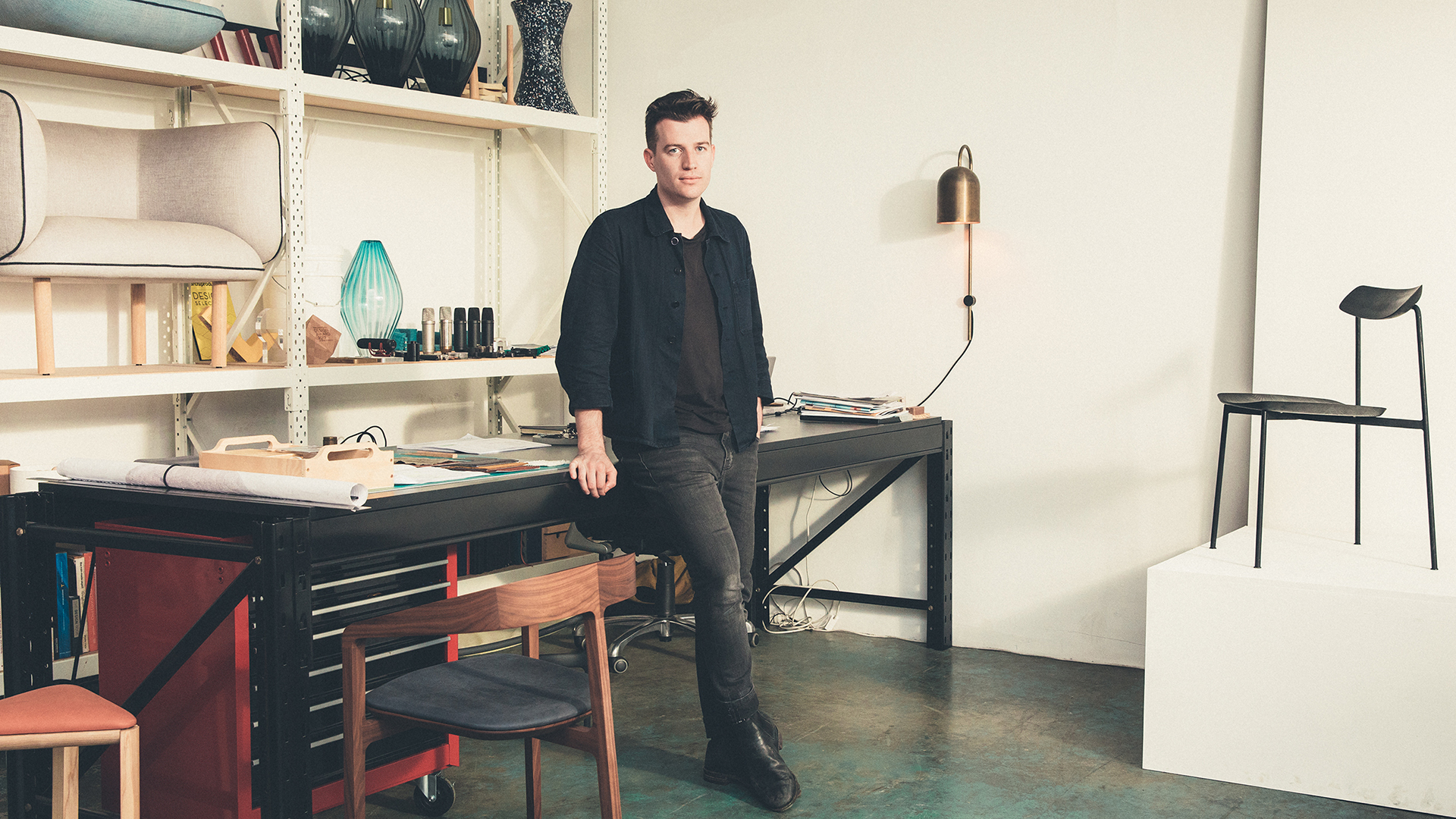 Driven by a desire to discover the tension that exists between natural materials and contemporary design and manufacture, Sydney-based industrial designer Tom Fereday is all about honest and enduring design.

Fereday is no new kid off the block. Since forming his studio in 2013, He has flexed his design skills to industry acclaim. More than a decade later, Fereday is an established designer with long-term ambitions and craftsmanship.

Keen to learn more about Fereday and his career journey so far, ADR caught up with the designer to fill in the blanks.

Fereday is also shortlisted in IDEA 2022 with winners to be announced on Thursday 24 November at The Timber Yard in Melbourne. Grab your ticket here!

ADR: Firstly, can you set the scene and tell me about yourself and where your love for design came from?

Tom Fereday: I grew up in England, but I was born in Australia. I started my life going to art college at Wimbledon School of Art in London and I soon realized that after doing sculpture, I needed more purpose and meaning for what I make, so I decided to switch careers and go into industrial design where there were problems to solve.

My career developed from studying industrial design at the University of Technology Sydney. I began to learn about what products and problem-solving are, and I became addicted.

You launched your own studio in 2013. What were you doing before this?

TF: I had an internship at Marc Newson Studio in London, and I worked with Moooi for three months through an awards program.

There are a few opportunities that started me off on my journey at a young age. Since about the age of 24, I was doing independent design projects and that led me to the momentum towards building my own studio and that would’ve been probably when I was about 27.

What was your experience of launching your own studio? Any surprises along the way?

TF: It’s quite an intimidating thing to become an independent designer. I really wanted to be able to be a part of every phase of the development of a product.

I basically began making furniture in my spare room as a hobby and then that grew into a passion, which I realised there could be work in.

I made the decision to go independent with no intention other than just a drive and the want to be able to work on a variety of projects.

Back in 2017, you won the Mercedes-Benz Award for the SIA chair with Cult Design selling the winning design under the guidance of the company’s founder and director Richard Munao. Was this the beginning of your relationship with Cult?

As part of the award, I got to visit Mercedes Benz’s Museum in Germany. The experience was fantastic and obviously, the huge benefit was the long-term relationship that I have with Cult now, I still work on products for them to this day.

For IDEA 2022, you are shortlisted in the Object – Furniture and Lighting – Professional category for the Nami collection with nau. How did this collection come about and what was its inspiration?

TF: It’s fundamentally based on the idea of high-quality flat-packing furniture. Normally furniture that flats into components are seen as lower quality as permanently joined timber, and the challenge was to create an incredibly simple collection that was strong and long-lasting.

The collection is furniture that anyone would want in their home, but no matter how large or small their home is and whether they moved house or not, the furniture can come with them.

What does the collection’s name refer to?

TF: It refers to the profile of the timber that we used. The edge detail is a unique profile for the collection, which runs across the whole design and is this deep curving face. That detail really expresses the grain of the timber and is where the name comes from.

From conception to realisation, how would you describe your design process when you go about creating something new?

TF: I try to start with a problem to solve.

In the past, just trying to create a nice product hasn’t been something that I’ve found has been enjoyable or successful for me. We really try to look at what problem could be solved or how we could improve an area or an item. From that, it is driven by the function and the material that would be applicable to that.

There’s no more beautiful material than timber when it comes to many furniture items like tables, for example. I articulate what it is we want the product to function and to do before the aesthetics or the design. It can be designed from the inside out, but upon closer inspection, it will reveal a lot of consideration and detail.

What is your collaboration with Cult and its in-house brand nau like?

TF: nau celebrates and heroes Australian designers and manufacturers for an international audience.

I collaborate with them from a design perspective and nau manufacture and supply the furniture. We act as a designer for their products alongside some fantastic designers like Adam Goodrum, Kate Stokes, and Adam Cornish.

What was your experience like as an emerging designer? What were the challenges or opportunities at the time?

TF: It’s firstly quite cost-prohibitive to become an independent studio. The cost of running a studio to be independent was a real challenge and took a lot of hard work.

I was fortunate enough to develop one or two pieces that I was really proud of, which received success. But the challenging part is maintaining that momentum of always keeping the quality of the work high, even as you have more and more opportunities or requests to maintain your ethos and how you work over time.

I would say anyone could start their own studio, and I think you should encourage people to, because the more designers in Australia, the better, in my opinion,

Were you mentored by other established designers at the beginning of your career?

TF: For sure. I think whether it’s mentoring or not, or just being inspired by the other designers that were more established at the time really gave me the encouragement to see what was possible.

When I started out, the industry was not as big as it is today and certainly finding brands and products was not as easy as it perhaps is now, but you could see that being successfully done by a few very good designers.

I think in combination with that, I was really lucky at a very pivotal point in my life to be mentored by Casper Vissers, who was the co-founder of Moooi and he was really instrumental in giving me life advice about, ‘Should I be doing this?’

I would also say the brands that I have worked with and continue to work with, act as really experienced business people and mentors. In each relationship I have with a brand, I try to steer it long-term and that support is a network where we can ask each other’s advice about things.

What advice would you give to an emerging industrial designer who would like to follow your path?

TF: Don’t be afraid to make mistakes. I think that now with everything being so beautiful with social media and how people present, there’s a natural hesitation if you’re not sure about things or do not feel like you’re ready.

But I think that often people are ready and it’s more about the sheer repetition of experience that will gain confidence and quality. It’s about being emboldened to go out there, try something new, be yourself and make mistakes.

Looking back, what would you say is the one thing that you’re most proud of?

TF: I’m really proud that the projects have grown with the types of people I’ve been able to collaborate with.

Recently, I’m proud to have been collaborating with the Art Gallery of New South Wales on furniture. That is something that I wouldn’t have necessarily considered at the beginning of my career.

But I think the nicest moment is really seeing your furniture in real life. Typically I only work on the furniture from the design to the production phase, but I have gone and been overseas and seen my furniture in a restaurant, that’s special.

Another rewarding thing would be to see my products have longevity. They still sell, even if they’re seven, or eight years old. That really is the biggest compliment because if it’s still relevant and it’s still applicable, that’s really nice.

What we don’t want to be doing as designers is constantly replacing our products with new products. That’s not the approach that I believe is sustainable.

Looking ahead, what is something that you are still keen to achieve?

TF: There’s such variety in the industry or the product area that I work in as a studio. Because I don’t sell, I’m not restricted by the material or the finish of the product.

I’m really excited to try and work on new product categories as well. My goal is to try to work on every item within a home. I don’t see myself just restricted to furniture, so I’m excited about new projects and categories that I might enter over the years.

What are you working on at the moment? What should we keep our eyes out for?

TF: We are just finishing the final stage of our collaboration with the Art Gallery of New South Wales, and we produced bespoke furniture for their entire new member’s lounge and new library, including a children’s library, which opens in December. The project has been in the works for about two years, it’s one of the biggest custom projects we’ve worked on.

I’m really excited to finish that project. Each piece was bespoke made for the gallery and it’s a large body of work from my studio’s perspective.

All photography by Sean Fennessy unless otherwise stated.

Studio Bright rejuvenates a city block in the heart of Sydney