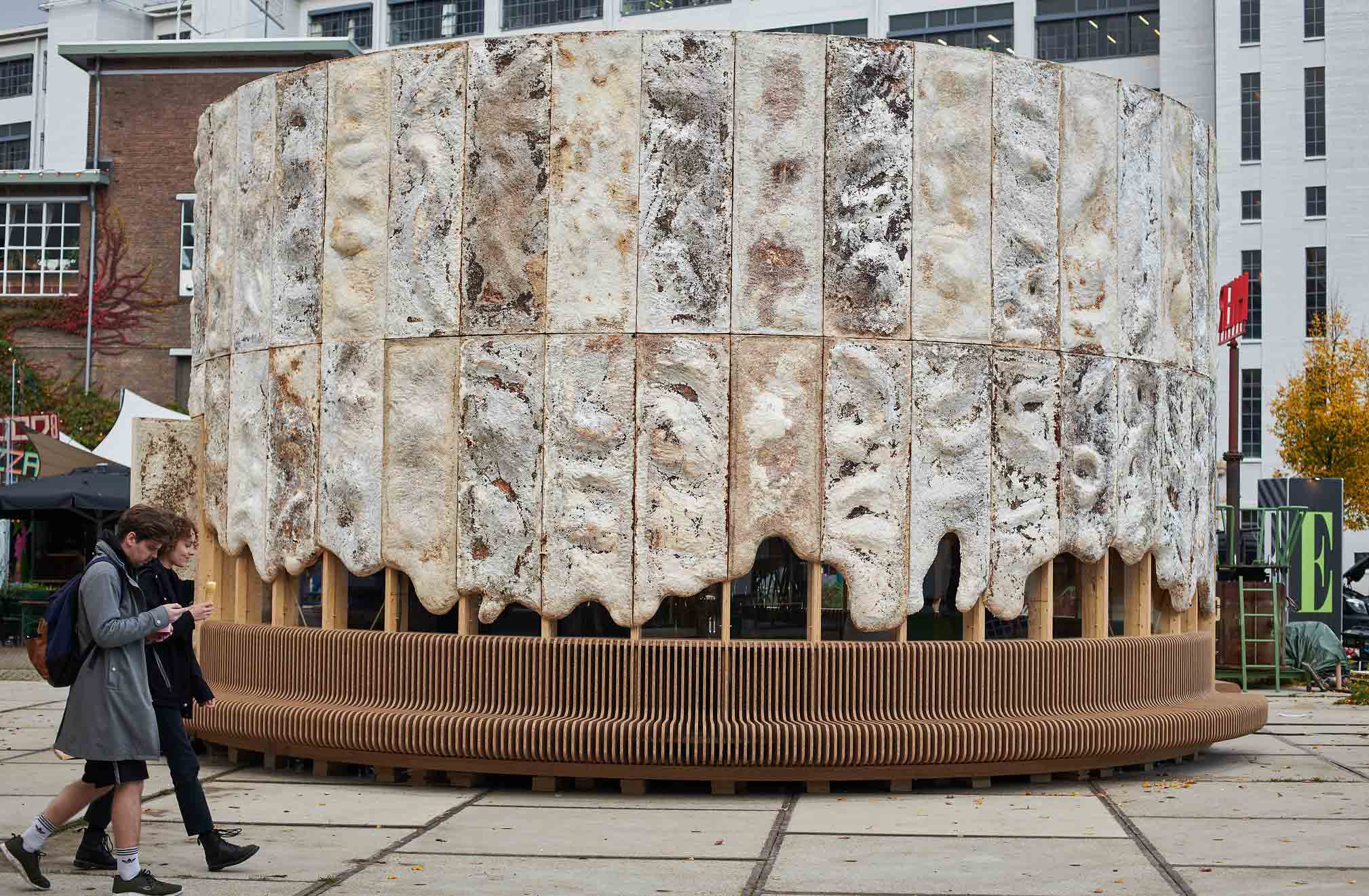 It’s a pop-up pavilion, but not as you know it. This one is made from mushrooms grown especially for this year’s Dutch Design Week.

One of the highlights of the event, which wrapped up over the weekend, the temporary performance space was designed by set designer and artist Pascal Leboucq in collaboration with Erik Klarenbeek’s studio Krown Design.

The so-called Growing Pavilion hosted biomaterial talks and events, while addressing questions around CO2 emissions, the use of agricultural waste products, subsidence, rising sea levels and the aesthetic value of organic building materials.

Speaking at the event, CEO and founder of New Heroes Lucas de Man said many of the pavilion’s features had never been done before.

“The walls are mycelium, so mushrooms, the floors are lisdodde, cattails. The ceiling is cotton. Everything there is produced by natural materials. It took us two years developing those walls,” he says.

“The Growing Pavilion also includes circular building materials – materials that can be recycled or reused again. The roof is one of them. The pavilion has a reverse peak on its roof, so that rainwater can be collected in a basin where plants can grow. It is a dynamic, living space, where mushrooms grow out of tables and can be eaten on the spot.”

The mushrooms were harvested in front of a live audience every day throughout the festival and cooked in a nearby food truck. Alongside them were lamps, cupboards and other objects made from grown materials.

The structure is still in the experimental stage, but the team is currently working towards panels and an eventual pavilion that will last outdoors for a few years.

The one presented at Dutch Design Week was coated in a protective product originally developed by the Inca, which helped insulate it for temperature and sound.

A similar organic-based project was also explored at the design event by University of Plymouth graduate Gavin Keightley.

Keightley used mashed potato and jelly to make moulds for a series of cabinets and stools. The collection was then cast from Jesmonite dyed in fluorescent hues.

The designer turned to food as a more sustainable way of moulding materials. He was drawn to the unique properties that were expressed in the details of the resulting surfaces by the foodstuffs, his favourite being agar jelly.

Keightley also experimented with pewter casting handles with peanut butter, noodles and rice. He found the high fat-content inside the mould would bubble and form unusual textures when the hot pewter was poured over it.

Designs also exhibited at this year’s event included a sofa made from 95 percent recycled materials and a line of Ukrainian indoor and outdoor furniture made from a mix of flax, cotton and biopolymer.

More about the festival