Home • Objects • From the ashes of Melbourne: Igneous light 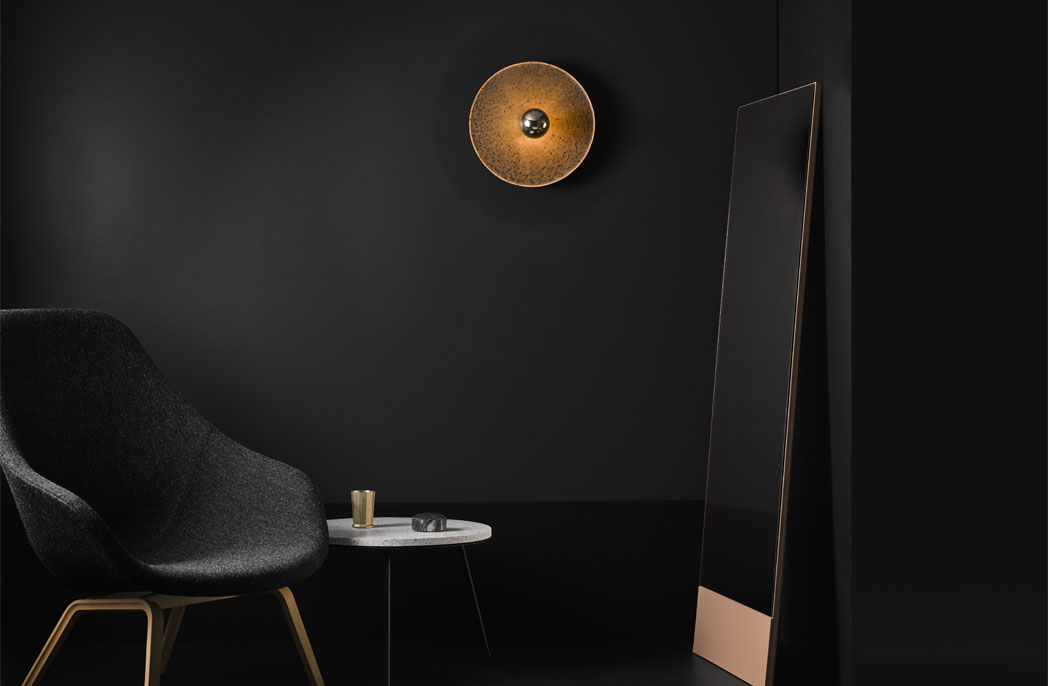 From the ashes of Melbourne: Igneous light

The Igneous light by James Walsh and Ash Allen takes an iconic Melbourne material and reimagines it in a new way. Developed in collaboration between the two Australian designers, the wall sconce light uses the bluestone foundations of Melbourne as a driving concept.

The inventive Igneous light will be shown as part of the Melbourne Movement show at Milan’s Satellite event this April. 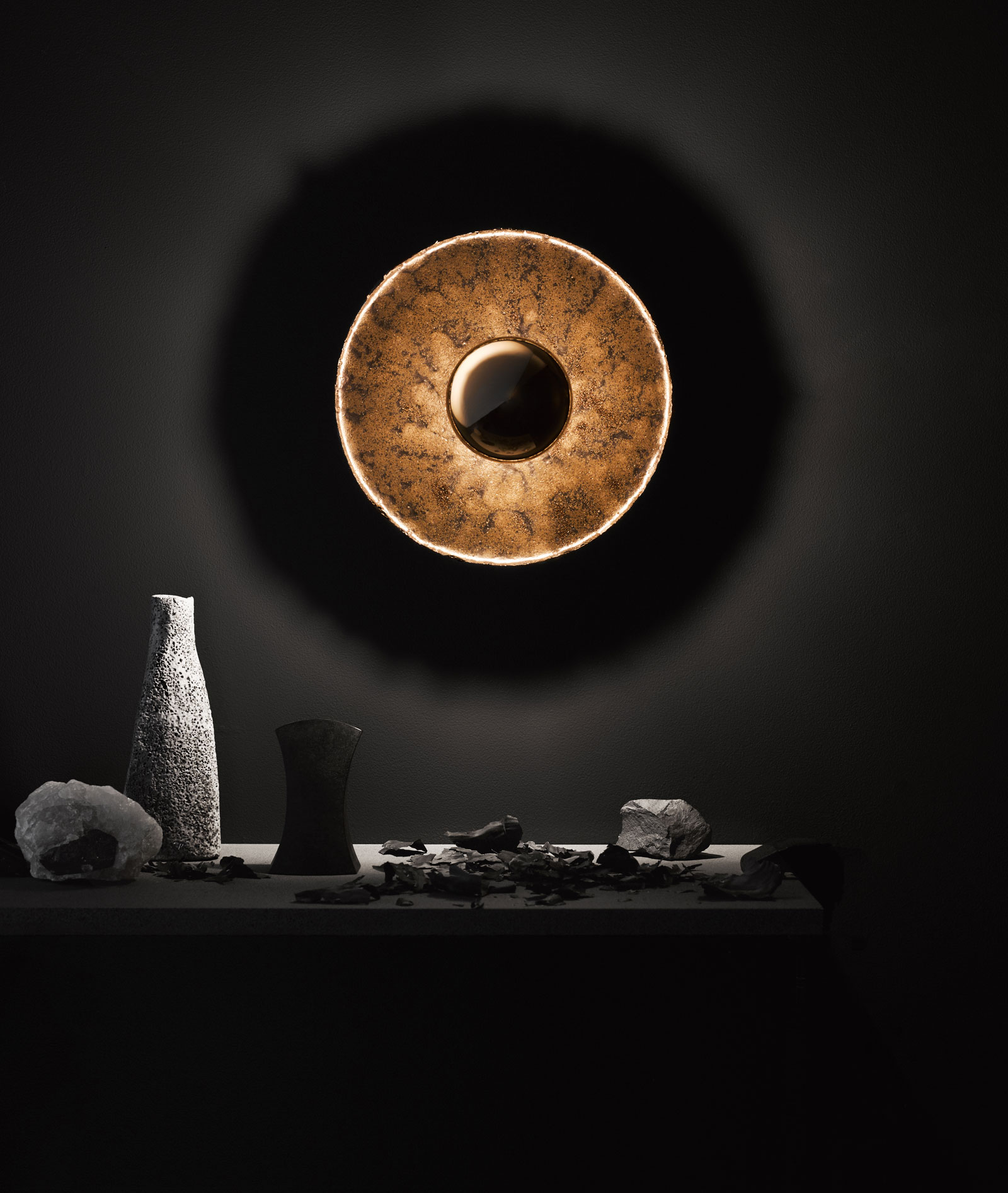 Melbourne-based designer James Walsh began looking for a uniquely Melbourne material while researching his honours thesis. It was this investigation that led to the natural basalt stone (aka ‘bluestone’) being used, which is so emblematic and prolifically used across Melbourne.

Bluestone has been quarried in the region for over 160 years, from a vast area stretching across the state of Victoria.

This historically rich and localised material became the obvious contender. “I was just looking at ‘What is Melbourne?’” Walsh says. But rather than simply using the material as it has been in past, the designer looked for alternative processes.

“I’m really interested in this global trend of using waste material. Once I started looking at Melbourne quarries and factories for potential, I found something really exciting.”

A local bluestone producer, who uses large stone-cutting saws to create tiles and pavers, employs a wet saw and the resulting runoff forms slurry, which is first collected and then disposed of. “There is so much waste,” Walsh explains. “Fifteen cubic metres of the sludge is produced each day, which goes straight into landfill.”

Inspired by designers such as Max Lamb, Maarten de Ceulaer, and a project by Forma Fantasma called ‘de natura fossilium’ – which looked at Italy’s Mt. Etna and using the materials from that location – Walsh turned to fellow designer/maker Ash Allen for help in developing a new product from Melbourne’s own bedrock.

With access to a kiln and a great deal of experience in product development, Allen was excited by the potential of this free waste product. The pair set about experimenting with different casting techniques for the waste basalt powder. “We did an initial casting in a crucible, and it looked promising. The powder turned molten and then solidified when it cooled,” Allen explains. “Over the course of six months, we had to overcome a series of problems. Initially, the basalt melt was sticking to everything, and then we had to deal with the foundry sand expanding and cracking the outer retaining ring,” Walsh says.

After much trial and error, a special re-useable casting sand was formulated and an optimal firing schedule settled upon. With this intellectual property, repeated, reliable castings can now be made. The designers sift the dried bluestone powder into a cavity formed in the casting sand and then fire it in the kiln over two days. A beautiful disk is the result, imperfect and elemental.

The designers discovered that the material changed quite dramatically when re-melted. Naturally occurring bluestone is quite porous, given it is formed by lava flows. This all changes when the run-off is fused back together, the material becomes denser and stronger.

The Igneous light is only 5mm thick, but very robust. At just over 2kg for the larger version, the product is both slimline and durable.

Perhaps the most surprising thing for Walsh and Allen is the natural veining and texturing that occurs in their final product. Rather than a smooth flat disk, the process gives the surface a textured finish. By altering the firing schedule, this veining can be played with, making each light an heirloom piece and genuinely unique. 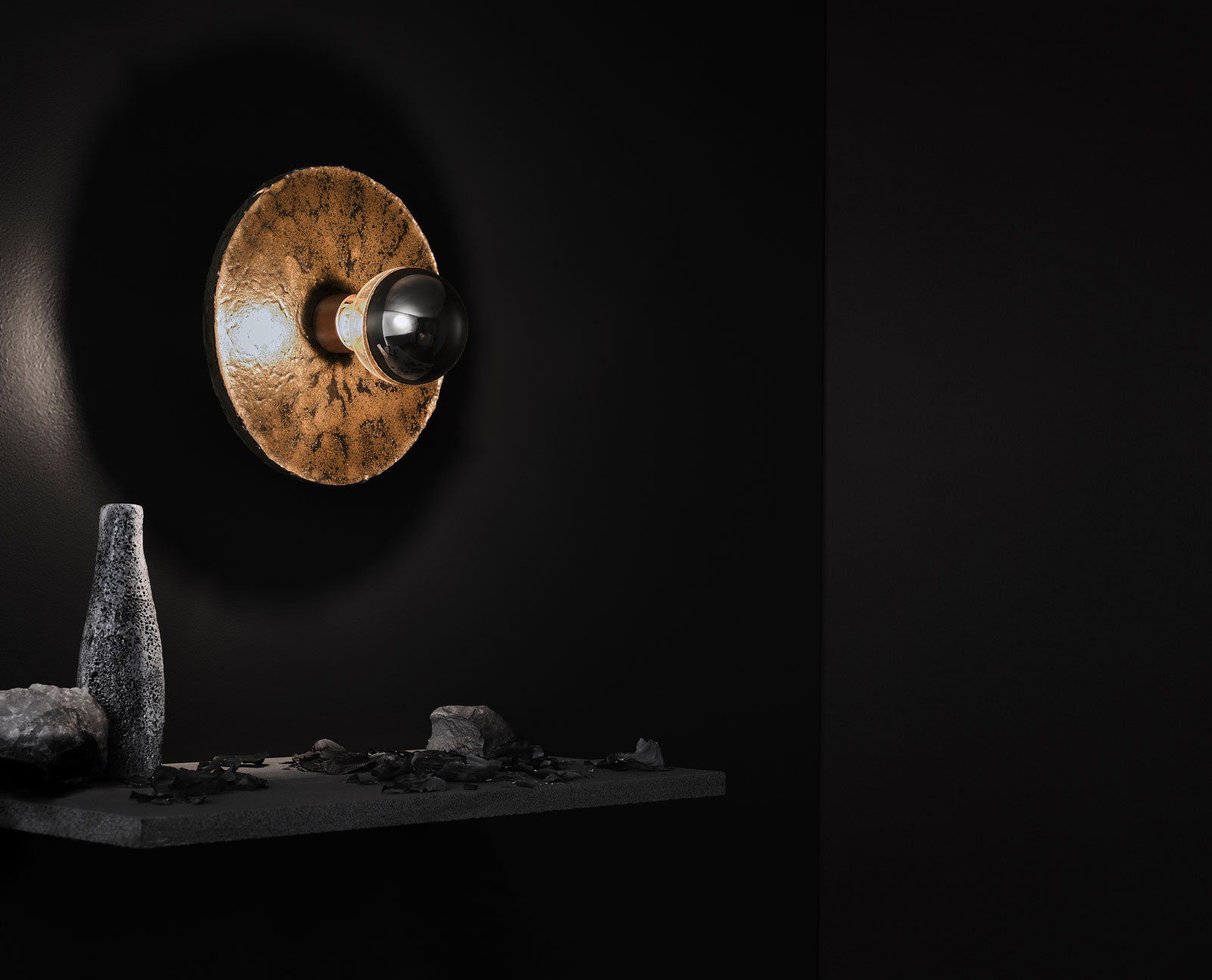 Let there be light

“Bluestone has mainly been used outdoors on a grand scale – for buildings, paths and landscaping,” Allen says. “Part of our intention was to create a product which we could bring indoors and use on a more intimate level.”

By lighting the disk with a gold-crown mirrored globe, the Igneous light takes on qualities of the volcanoes it is distantly related to.

The most mesmerising feature is the bright ring of light that appears around the edge when the light is on. This is from the raised meniscus, which forms during the melting process. It is essentially where the sand is in contact with the edge of the molten puddle. The final effect was discovered purely by chance and so too, the intriguing halo shadow cast on the wall. “It was amazing that first time that we put the globe in. We didn’t expect the edge to glow like that, and for the light to really pick up that edge. We were stoked,” Walsh remembers.

The final light is available in two sizes – 260 and 385mm diameters – and comes with a knurled brass lamp holder and a wall bracket, which hangs simply on the wall.

Walsh will be exhibiting the Igneous lights as part of the Melbourne Movement at the Salone del Mobile in Milan this year. He hopes to meet with European distributors interested in the unique product – its story, its very-Melbourne origins and its real export potential.

Each light is genuinely one of a kind, made in Allen’s Melbourne factory. It is a product that has resulted from months of experimentation and will no doubt appeal to those who understand the value of hand-crafted, unique lighting products.

All photography by Reuben Gates with styling by Bek Sheppard.