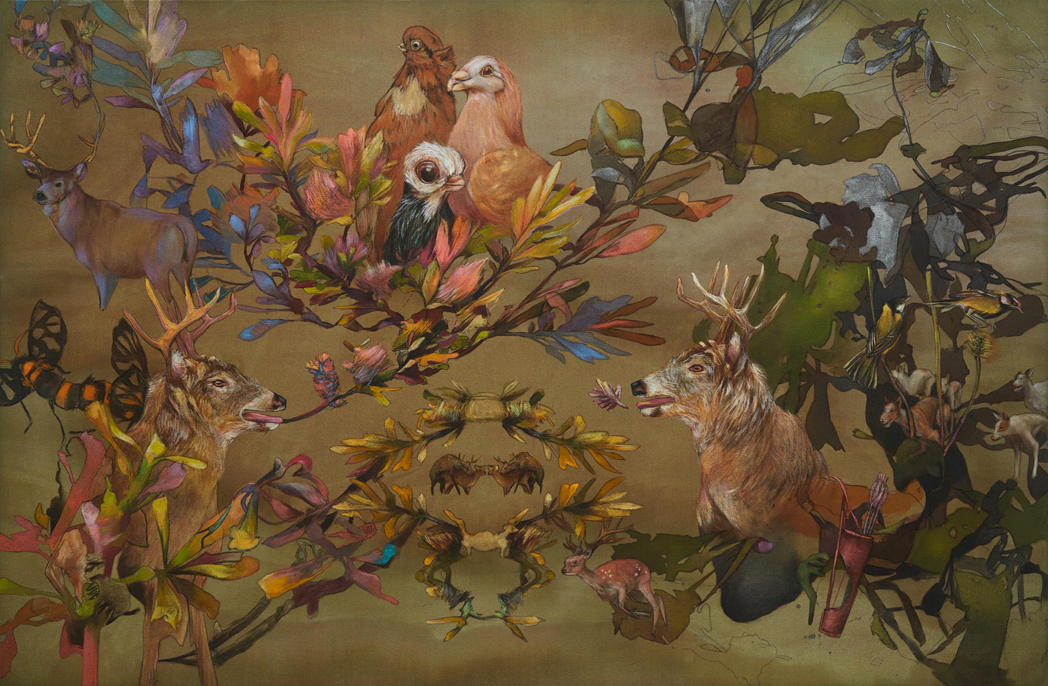 Touching on themes of the magical and natural as co-inhabiting the same space and time, the work of Floria Tosca offers a concertinaed kind of evolution. Colour and form are fragmented through shards that shift dimension and break the plane to render perspective ambiguous. Similarly, scale is adjusted to shift focus and decentralise the image. Moreover, there is a beauty to her work that rejects a cynical gaze, offering instead a herd of bejewelled animals, fantastical flowers and, as with the Blake Prize work, Eutopia of Eden, pairs of animals in various states of rut, entwining and snarling their way across the canvas.

Responding to Mythos, the retelling of the Greek myths, by Stephen Fry, the work expands Tosca’s fascination with Judeo Christian origin stories to a predating culture and universal platform where nature is paramount. Incorporating nature and natural phenomena in storytelling, the Greek myths expound a state of fluidity between what is human or godlike; with what is animal, plant, the sky or earth. In doing so, transformation between these states is with ease, and it is here that Tosca explores her subject.

In Fry’s reading and indeed the Greek’s, who named their capital city for her, Athena, as goddess of war, is more accurately celebrated as the strategic and craft side of battle, than the bloodlust and mayhem. With both the goat and owl linked as symbols to her wisdom, Tosca’s narrative is realised in combination, with the owl drawn on goat skin velum. Compositionally the immediate image is centrally located and somewhat stark, yet, it is the relationship of the second subject – the goat – that both frames and contains the primary image that informs the reading.

Aphrodite is similarly realised as a symbolic construct. Here, the Greek myth of creation, whereby Kronus castrates and casts his father’s genitals into the sea and Aphrodite is born, is overlaid with man’s manipulation of evolution and religious meaning. Symbolically linked to the dove, the Aphrodite myth is one of love and desire. The dove, however, has not satisfied pigeon fanciers, who have laboured diligently to transform the simple form into an animal with no chance of survival in the natural world. Instead, the chest of the Bokhara Trumpeter, for example, has been puffed to make seeing over her chest near impossible while the feathered muffs adorning her feet make walking difficult. In Tosca’s Aphrodite Emerges, the trumpeter is depicted in a mirror image of the unnatural stance of Sandro Botticelli’s The Birth of Venus, however, where Botticelli’s sexualisation of the subject is demure, Tosca’s is overt with the gaze directed outwards with cognition of effect. “The Pigeon has been distorted beyond nature, towards an aesthetic ideal with no correlation to the bird’s nature, but it is what we humans do to make animals conform to a physical ideal” says Tosca.

The body of work, while a departure from her pure abstractions, melds the sophistication of colour and form Tosca is known for within a complex narrative. Beautifully realised, her downy moths and sharp toothed lions are embedded in a rich flora of exploding colour, form and sumptuous nature.