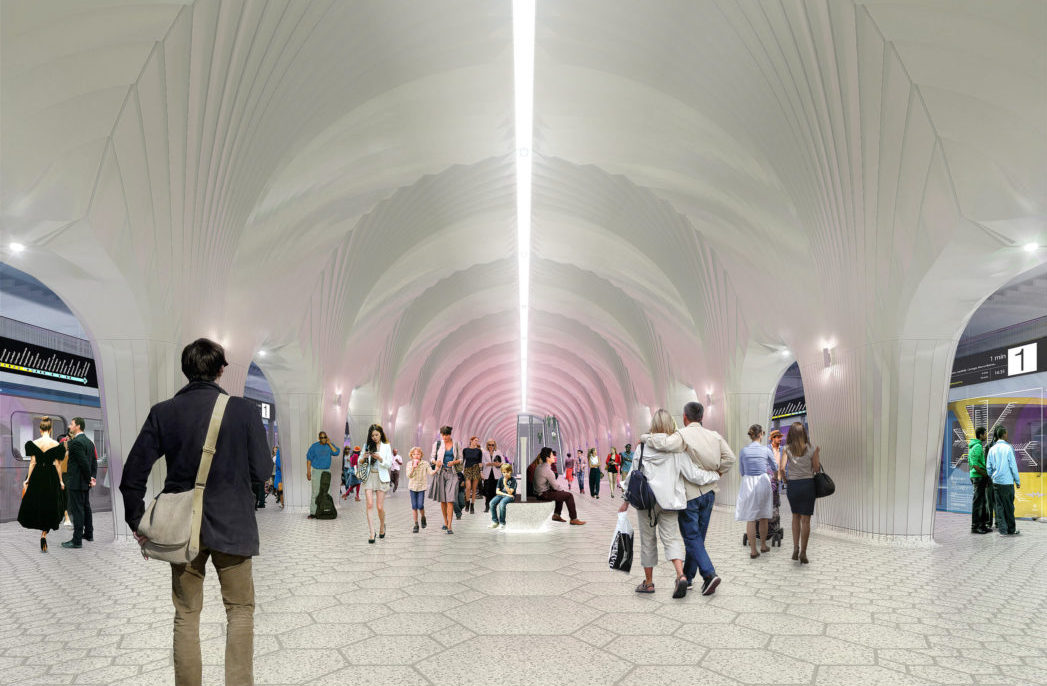 Renders of Melbourne’s five new Metro Tunnel train stations, designed by HASSELL and Weston Williamson, have been revealed. The images show designs that focus on natural light and enhancing the pedestrian experience. See the designs below.

Grimshaw was the architect for the Metro Tunnel ‘reference designs,’ which were released last year. This reference design formed the basis of the Environment Effects Statement assessment and was used by PPP (Public Private Partnership) bidders to guide their proposed construction methodology and design. Weston Williamson and HASSELL, as part of the Cross Yarra Partnership consortium, have taken this work further and developed new concept designs, confirms Melbourne Metro Rail Authority.

“The new station in Arden will trigger a transformation from an industrial precinct to a thriving commercial and residential community located just minutes from the CBD,” says Melbourne Metro Rail Authority.

The station’s design will reflect Arden’s rich industrial history through the use of materials such as clay brick, bluestone, timber, steel and glass.

Feature skylights will bring natural light into the station concourse and down to platform level, and a water feature will be incorporated into the entrance. 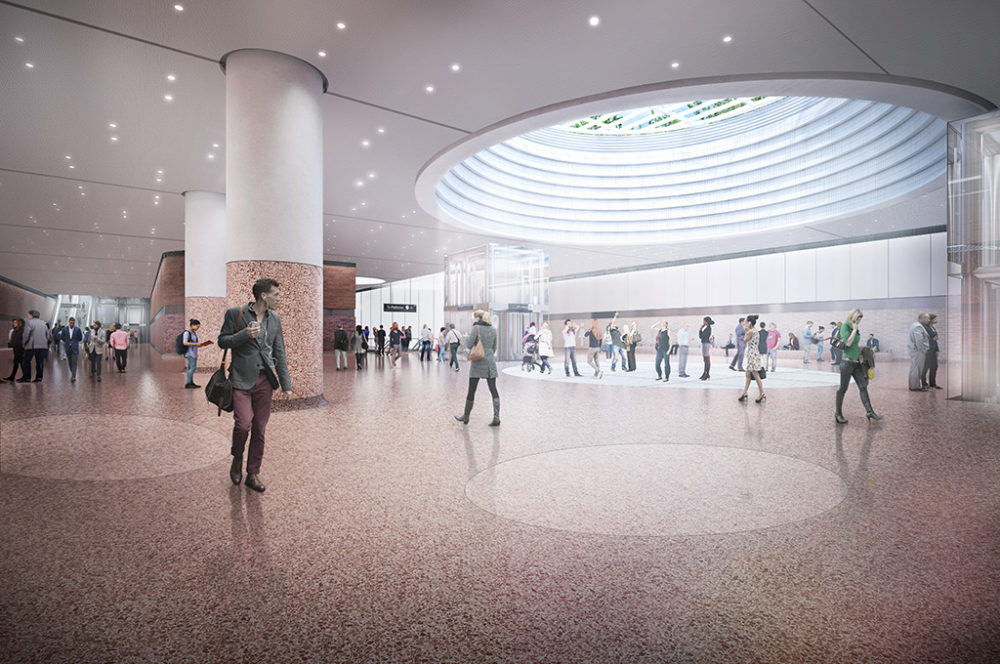 Arden Station will be located near the corner of Arden Street and Laurens Street, and will connect the area to the Sunbury and Cranbourne/Pakenham lines, creating a focal point for residential, commercial and retail development.

Arden Station will be located within walking distance of the North Melbourne Recreation Centre and Arden Street Oval as well as the 57 tram and several bus routes. As part of the works to build the new station in Arden Street, over 6,000 square meters of new public space will be created and landscaped.

Recognising that Arden and the nearby Moonee Ponds Creek are prone to flooding, a proposed ‘urban sponge’ landscaping strategy will be used to absorb storm water. Initiatives to achieve this include rain gardens, tree planters and an increase in permeable paving. 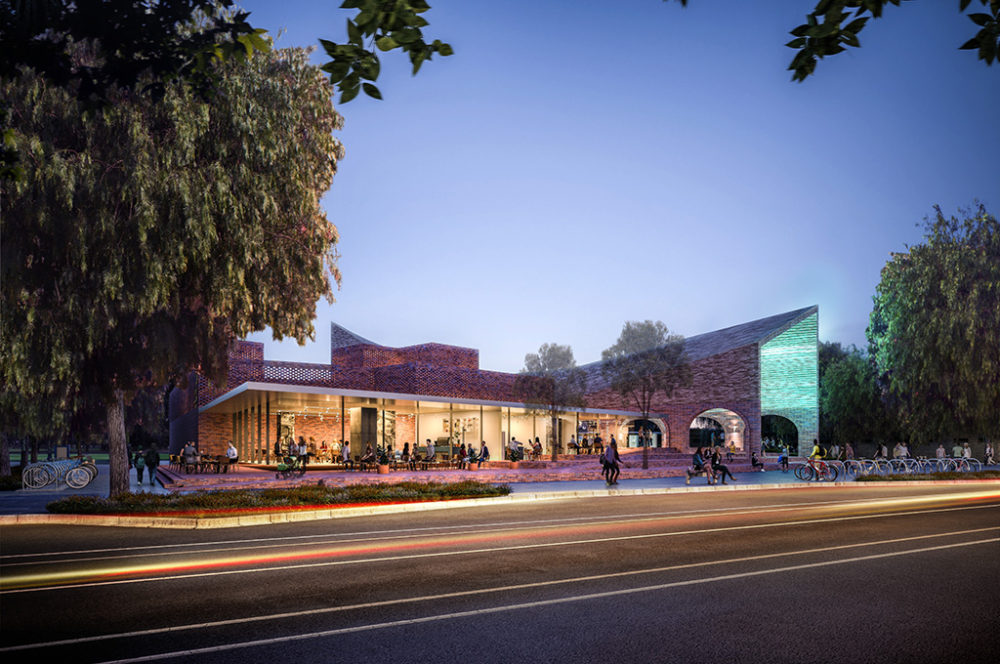 Parkville Station connects the education, health and research precinct to the rail network for the first time, and includes station entrances on the doorstep of the University of Melbourne and some of Victoria’s biggest hospitals.

It will feature materials that reflect the precinct’s character, including bluestone, sandstone, glass and steel. Landscaping will include medicinal plants used by both Indigenous and western cultures.

The station concourse will be filled with natural light to create a comfortable and welcoming environment for passengers, with space for retail outlets and restaurants. 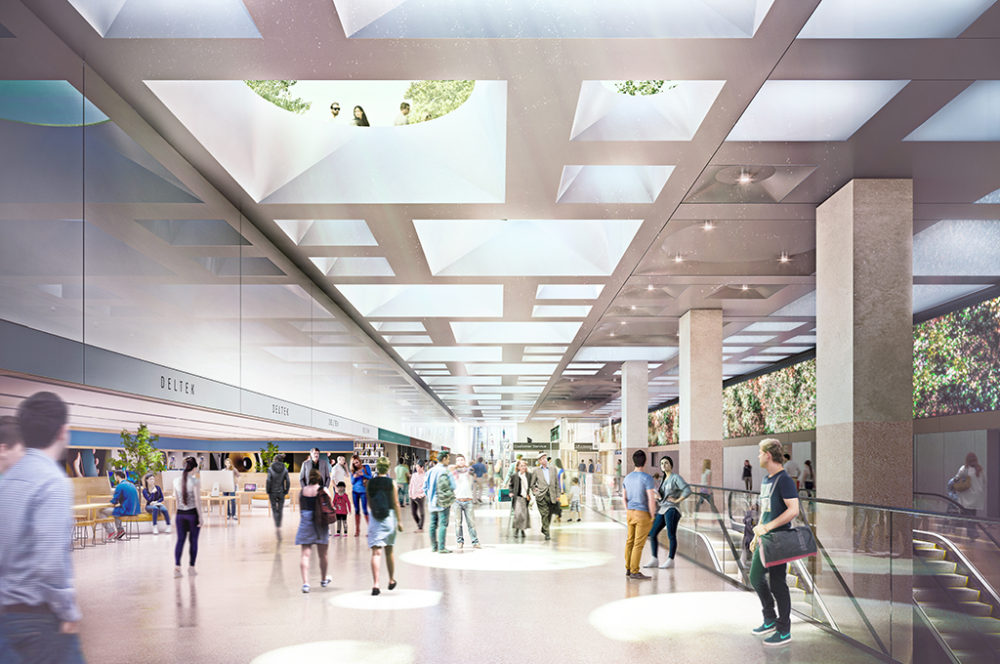 The new station in Parkville will be located under Grattan Street near Royal Parade, providing a direct rail connection to the area for the first time and relieving pressure on local trams and roads.

A subway will connect the new station concourse to the Victorian Comprehensive Cancer Centre (VCCC) and Royal Melbourne Hospital, running under Royal Parade, allowing pedestrians a safe route to the other side of the major road. 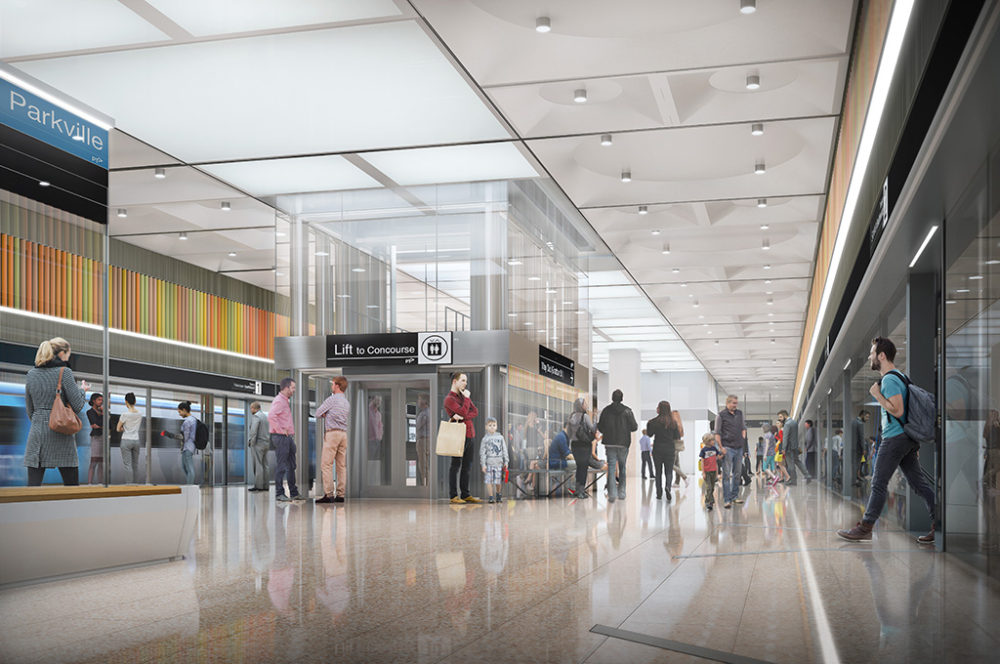 As part of works, 3500 square metres of new public space will also be created, with a double row of trees planted along Grattan Street and opportunities for outdoor dining, seating and landscaping.

Barry Street will be closed to traffic and become an extension of University Square, while traffic will be reduced to one lane in each direction on Grattan Street so footpaths can be widened. 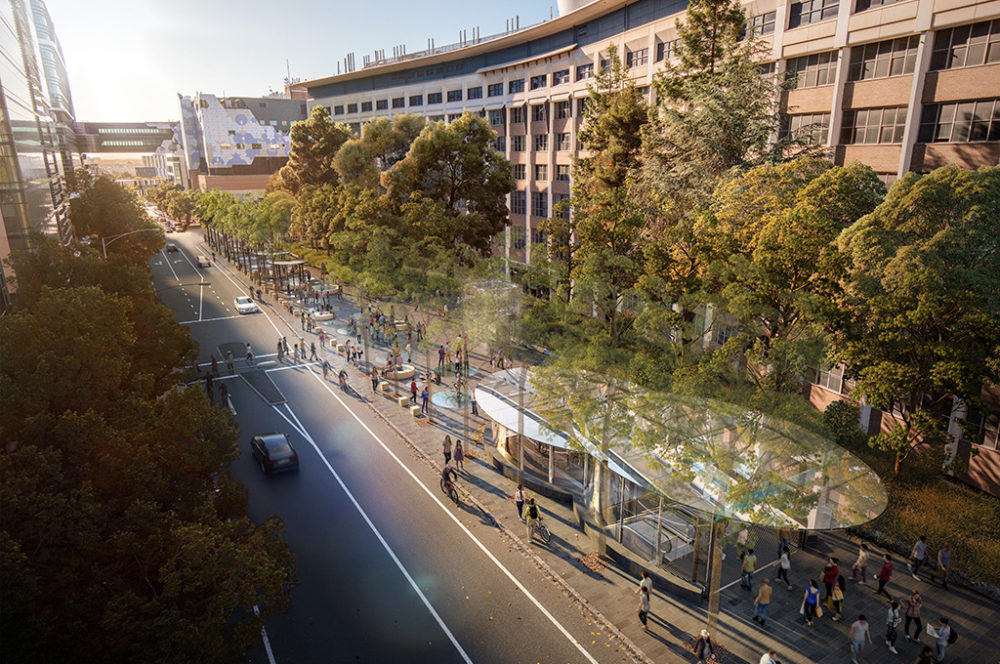 “The stations will more evenly distribute passenger flow and interchange movements in the inner core of Melbourne’s rail network,” says Melbourne Metro Rail Authority. “Crowding across all City Loop stations is expected to drop by around 20 percent, creating a more comfortable passenger experience.” 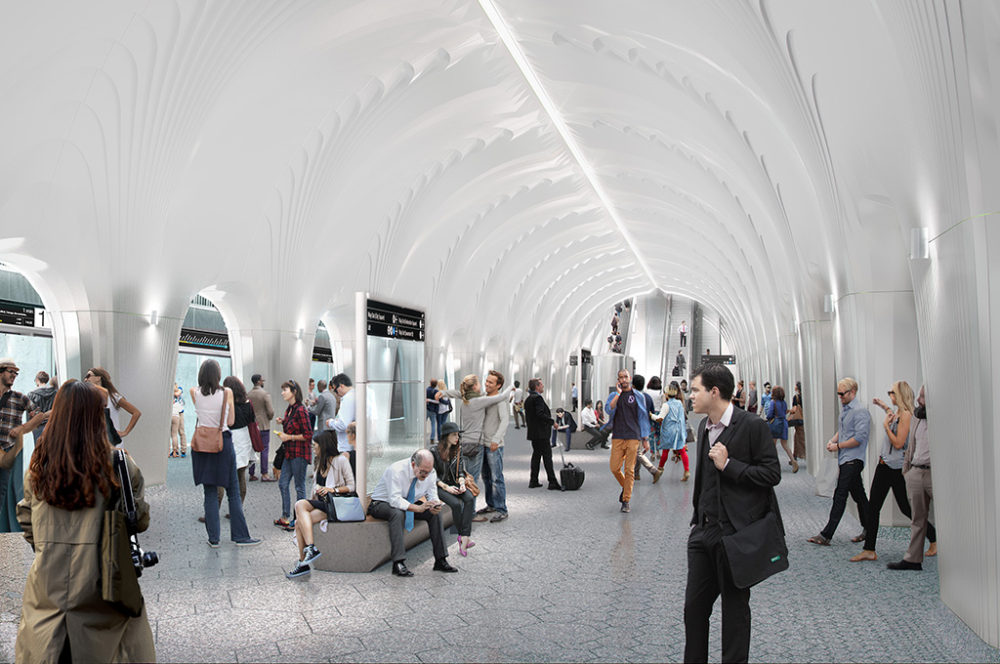 CBD South station will be located under Swanston Street, between Flinders Street and Collins Street. It will include an underground pedestrian connection to the platforms at Flinders Street Station, allowing commuters to interchange between Metro Tunnel and City Loop train services.

CBD North will also be located under Swanston Street, but between La Trobe Street and Franklin Street. It will include an underground pedestrian connection to Melbourne Central Station. 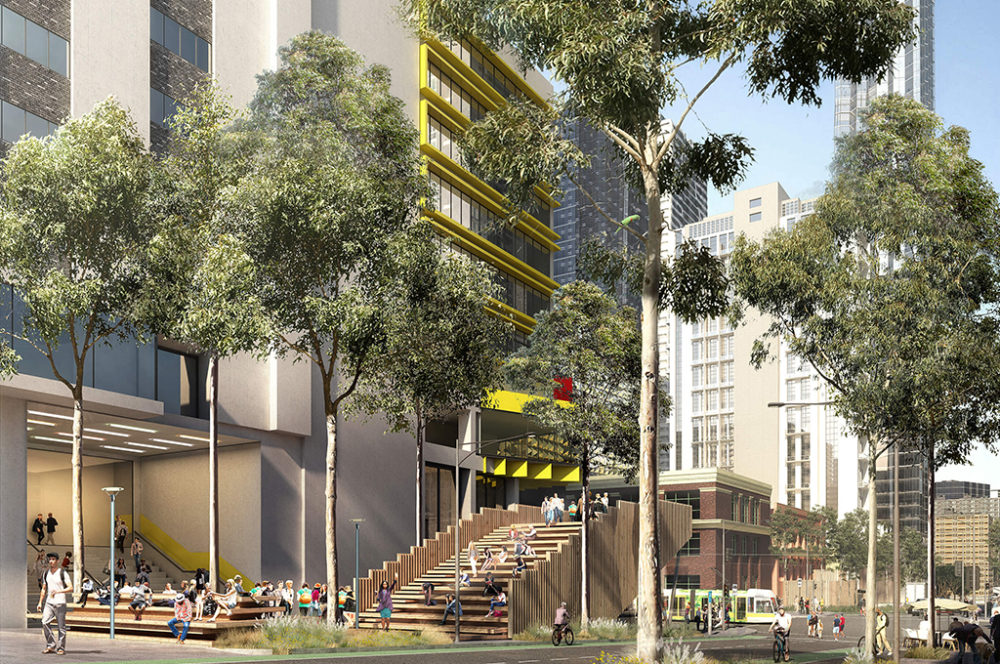 The CBD stations have been designed as giant auditoriums of grand proportions, with new civic spaces marking the entrances.

The planting of native and indigenous plants at both stations will bring nature into the city environment. 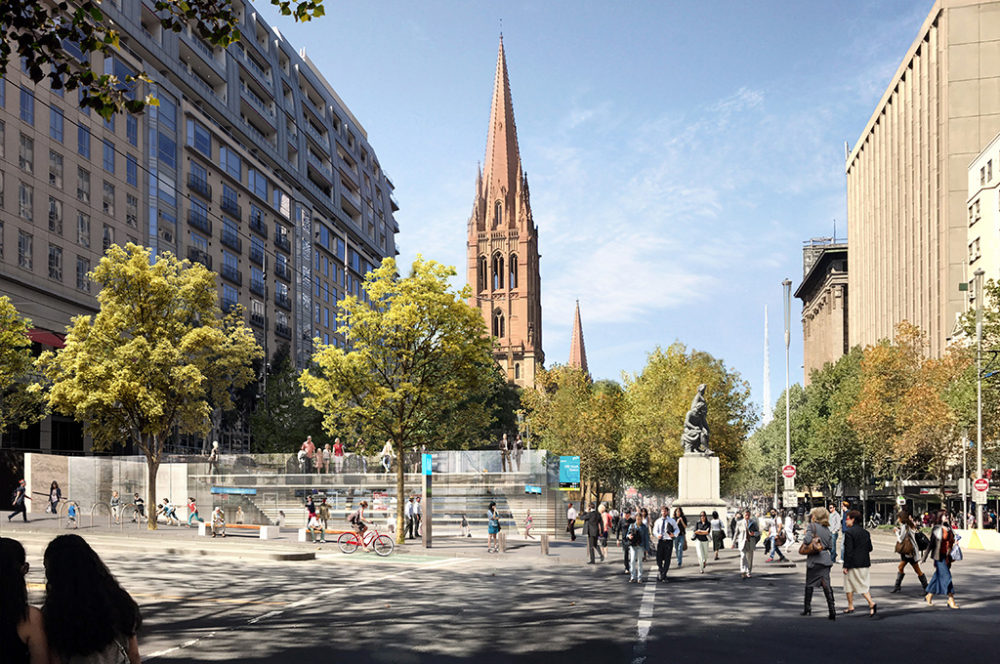 The Domain station is strategically placed to ease pressure on the St Kilda Road/Swanston Street tram corridor and will significantly improve access to key Melbourne landmarks such as the Shrine of Remembrance and Albert Park. 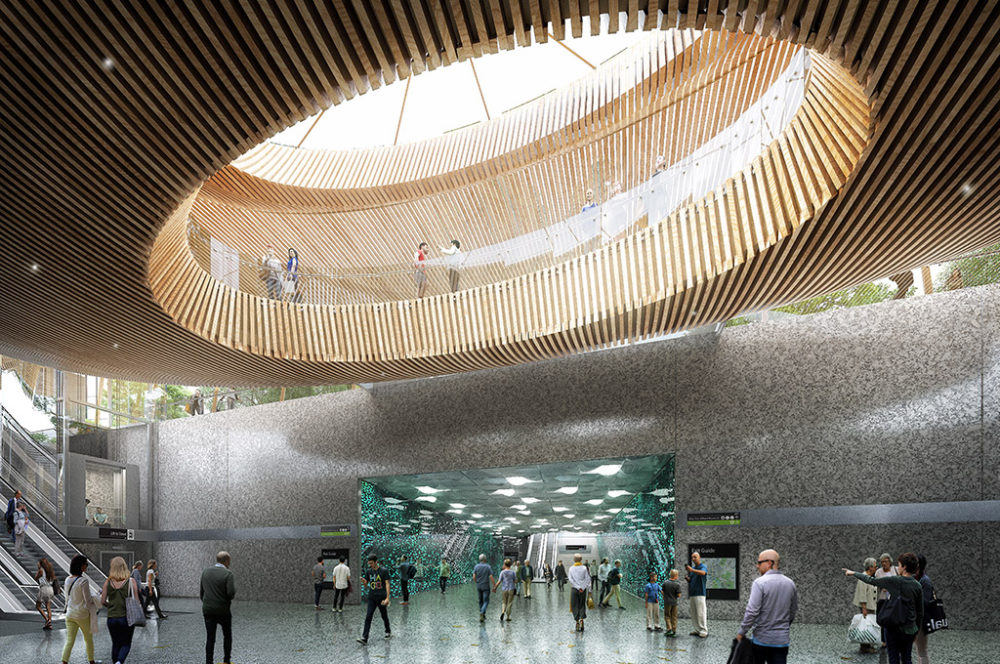 Materials such as bluestone, granite and timber have been carefully selected as part of the station’s design to reflect the surrounding parkland and the Shrine of Remembrance.

A feature skylight will bring natural light into the station concourse and a spacious pedestrian underpass, which will include retail outlets and art installations. The station will sit below a new train-tram interchange, featuring a floating timber canopy to protect passengers from the elements. 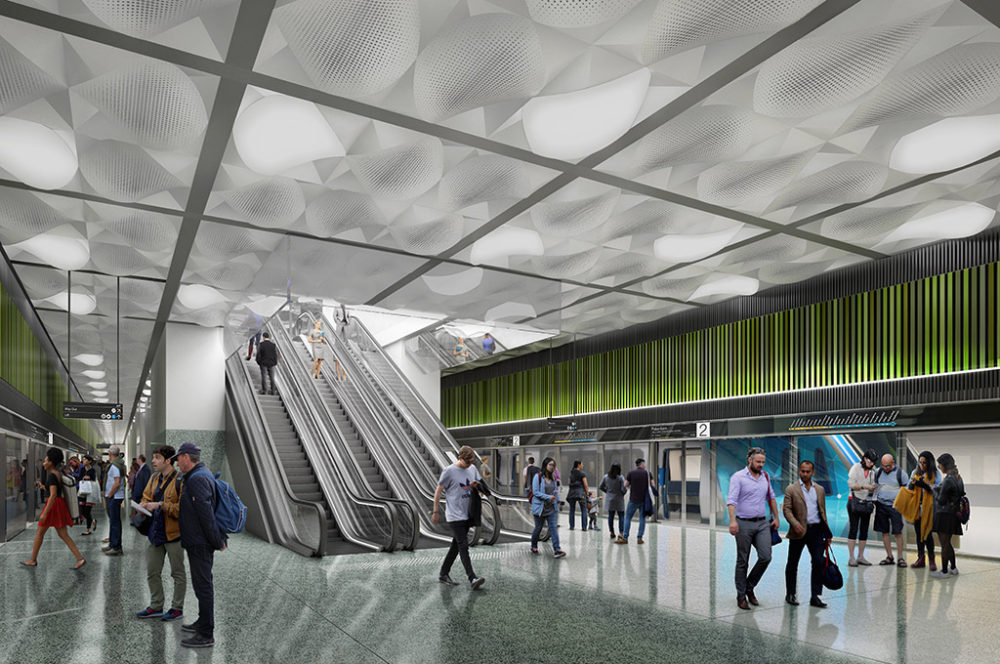 The station will be accessed from four entry points – one on the outer edge of the Shrine of Remembrance grounds, another at the Albert Road Reserve and two at the new train/tram interchange directly above the station on St Kilda Road.

The station entrances have been positioned to create a public walkway underneath St Kilda Road, improving pedestrian safety and convenience. 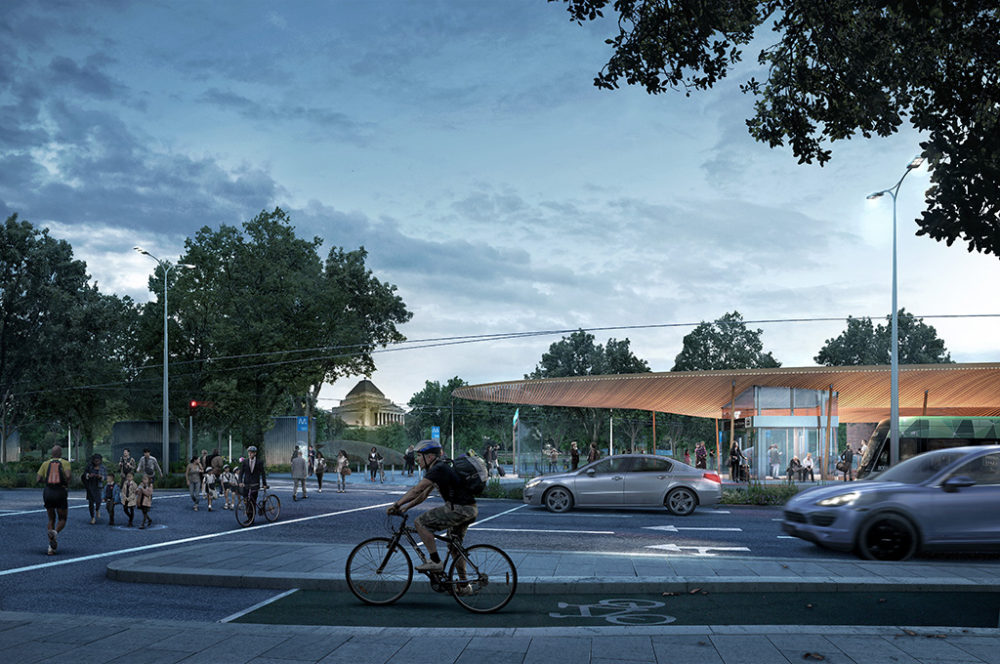 As part of the works, Albert Road Reserve will be expanded, landscaped and upgraded to become a new community park.

Most of the existing elm trees within Albert Road Reserve will be retained, including the Windsor oak, and new native species will be planted to increase the overall number of trees in the reserve.

The result will be 4500 square metres of new public space that links some of Melbourne’s most popular parks – Albert Park, the Shrine of Remembrance grounds and the Royal Botanic Gardens.

Grimshaw was the architect for the Metro Tunnel ‘reference designs,’ which were released last year. This reference design formed the basis of the Environment Effects Statement assessment and was used by PPP (Public Private Partnership) bidders to guide their proposed construction methodology and design. Weston Williamson and HASSELL, as part of the Cross Yarra Partnership consortium, have taken this work further and developed new concept designs, confirms Melbourne Metro Rail Authority.

Click here for more info on the Metro Tunnel.

Click here to see how the final designs differ from the indicative designs that were released last year.