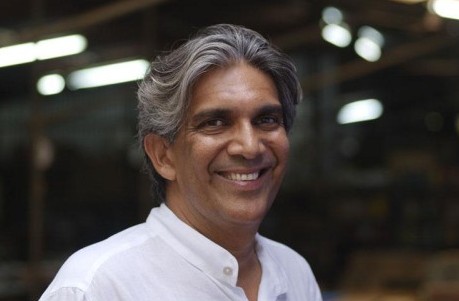 Indian architect Bijoy Jain of Studio Mumbai was yesterday announced as MPavilion’s 2016 architect, as commissioned by the Naomi Milgrom Foundation.

Known for his innovative and sustainable designs, Bijoy’s works include the Palmyra House, a home located outside of Mumbai which is made entirely from locally-sourced materials. Timber is a major element in his projects. In Maharashtra, India, he developed an addition on a home comprised of a timber frame with agricultural shade netting wrapped around its boundaries, creating an extension that is permeable by light, sun, and air. Bijoy’s projects have been presented in the Architectural League of New York, the Alvar Alto Symposium, and the Canadian Centre for Architecture.

In 1995 he founded Studio Mumbai, renowned for developing projects through careful consideration of place and practice, drawing on traditional skills, local building techniques and materials, and an ingenuity arising from limited resources.

Naomi Milgrom AO, Chair of Naomi Milgrom Foundation, has praised the architect. “[He] is one of the world’s most fascinating architects. His approach to design reflects a deep concern for craft, sustainability and community. Studio Mumbai’s work inspires us all to reconsider the way we design and continues MPavilion’s interest in collaboration and global connectedness,” she said.

Commenting on his commission for the MPavilion 2016, Bijoy said: “I want it to be a symbol of the elemental nature of communal structures. Like Naomi, I see MPavilion as a place of engagement: a space to discover the essentials of the world – and of oneself.”

MPavilion 2015 closed on Sunday 7 February, having welcomed more than 76,000 visitors attending 419 free events in the temporary architecture pavilion in Melbourne’s Queen Victoria Gardens. The design was a series of three and five-metre wide petals made out of ultra-thin translucent composite and carbon fibre which created the sensation of a glowing forest canopy, and was developed by British architect Amanda Levete of London-based studio AL_A in collaboration with Australian specialist mouldCAM.