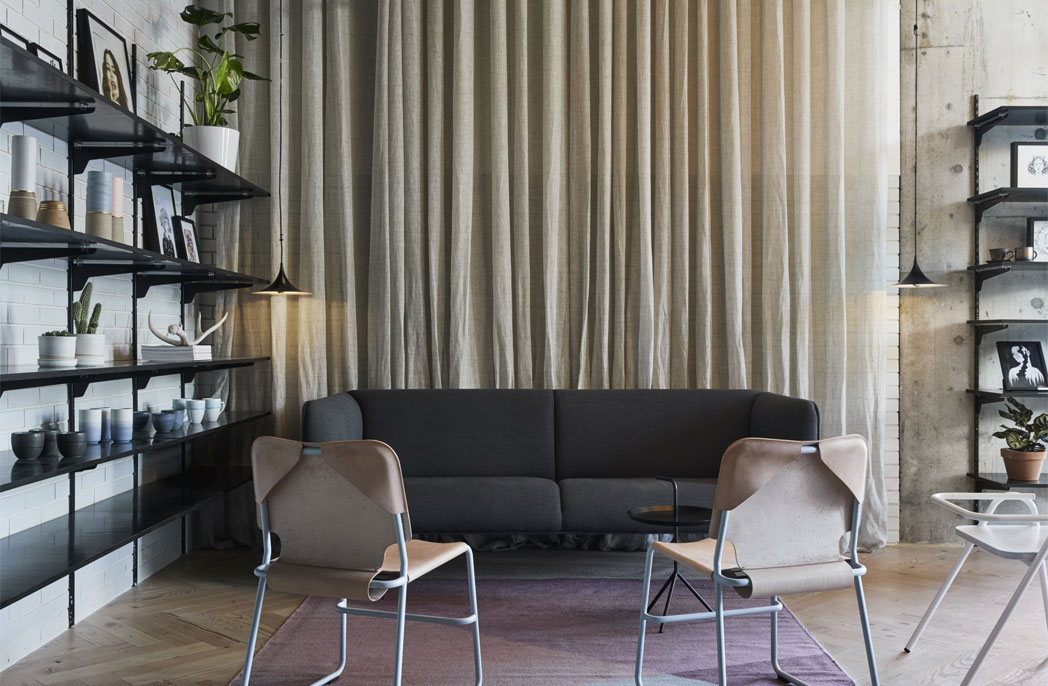 Briefed to take inspiration from the French village of Auvers-sur-Oise, the language of the design is drawn from the materials of the town, while the feature light references Auvers-sur Oise as Vincent van Gogh’s last home. And, while van Gogh is the most famous artist resident, the village has also been home to Paul Cézanne, Charles-François Daubigny, Camille Pissaro and Jean-Baptiste-Camille Corot. Woods has explored the element of artistry through sculptural forms. He superimposes materiality and form within the existing industrial shell whereby the existing and introduced elements combine to create a whole. The lovely detail of brass knobs running under the wall counter for coats and bags (Auhaus), for example, being both warm and industrial, marries the disparate elements, while the rawness of the primary materials has a natural synergy to the poured concrete walls. Moreover, Woods’ aesthetic embraces the raw elements rather than act to conceal or negate: “I really like the poured in place cement and concrete blocks so I left it all exposed. It has an inherent beauty to it that I really like.”

Bespoke black shelving in waxed nickel and powder-coated steel provides striking horizontal lines that vary from the counter and standalone shelves to full wall iterations. A collection of art, ceramics, plants and books have been arranged for viewing and use, while the visible utility pipes have been painted the same black as a continuation of the design. Utility has further been addressed without detracting from the industrial feel, or dropping the ceiling height, via a 10-millimetre shadow line at junction lines for the acoustic material (Autex) used on the exceedingly high ceiling.

“My brief wasn’t to recreate the city but be inspired by it. I took that literally in developing the concept for the light as sculptural, in terms of being a drawn line prior to a sketch.” – Matt Woods

Calling on the textural variation in the grain of reclaimed Douglas fir (Australian Architectural Hardwoods), the floor combines grain and herringbone to great effect. The warm tones of the timber have been slightly muted with Osmo white oil, but will become pinker with age. Similarly, the dry stacked, handmade Casa clay tiles (On Site) cladding the counter and support columns will become a deeper orange with time.

The tonal similarity between timber and tile, while soft, creates a dramatic weight to the forms that works in two ways. When the café is empty, the forms are clear and sculptural. Conversely, when the café is populated, these elements recede to background and in their simplicity emanate nothing but the warmth of their tones. The hero sculptural piece, however, is the bespoke feature light. Executed by Woods’ long-term lighting collaborator, Studio Ham, the piece Mr Squiggle: The Man From The Moon is as Woods describes, a squiggle made real: “Inspired by art, my brief wasn’t to recreate the city but be inspired by it. I took that literally in developing the concept for the light as sculptural, in terms of being a drawn line prior to a sketch. I drew a basic squiggle and said to Mark at Studio Ham, can you make this for me?” A lot of bending ensued, with the seemingly impossible installation wrapping the structural column to visually float across the space.

The furniture for the main area is similarly sculptural with Dowel Jones Hurdle high stools, and Hurdle half chairs realised in reclaimed Douglas fir and white powder-coated steel, while Pendrali Bold table bases (James Richardson) are also topped with reclaimed Douglas fir. Woods has created a subtle variation to the fir by varying the strength of white oil used between floor, chairs and tables. “I wanted something to really accentuate the grain and I’m a big fan of Douglas fir because of that; it’s one of my favourites. It is a bit softer so I don’t often get the chance to use it, but I like it for this space where it was always going to texture up and I [could] use it to add texture from the start,” says Woods. The outdoor iteration sees the same tables with tops of black compact laminate and low back Nolita armchairs in anthracite (James Richardson).

“I really like the poured in place cement and concrete blocks so I left it all exposed. It has an inherent beauty.” – Matt Woods

Towards the rear of the Auvers café Woods has pushed the design to deliver an intimate space. Here, the walls are clad to create a false room height and volume in white glazed facing tiles (Robertson’s). On the larger of the two tiled areas, black shelves and objects create an area of interest. The adjacent wall, which effectively becomes the room’s backdrop, is only tiled to slightly beyond the width of the charcoal lounge (Louis sofa, Blu Dot), which in turn, is framed by a pair of Claus Bonderup & Torsten Thorup semi pendant lights in matte black hung at eye level (Gubi, Cult). A sheer melange linen curtain (Westbury Textiles) softens the whole while allowing the textural pattern of the brick tiles to continue their visual presence. Softening and delineating this area further is a Pink Tuck Marle rug (Armadillo & Co) and the addition of a pair of Adam Lynch’s TBC 1 chairs in raw leather (Lab De Stu) and Thomas Bentzen’s DLM (Don’t Leave Me) side table for Hay (Cult).

Rich with ideas and texture on the one hand, the broad strokes are conversely exceedingly simple and quietly elegant for being so. The result is a bright and airy space that shifts to comfort and intimacy without spelling things out. It is also defining a new aesthetic for Rhodes that is slightly avant-garde, slightly French and slightly arty, while wholly appropriate to the burgeoning aspirations of the community.

This article originally appeared in inside 96 – available at shop.niche.com.au or digitally through Zinio.