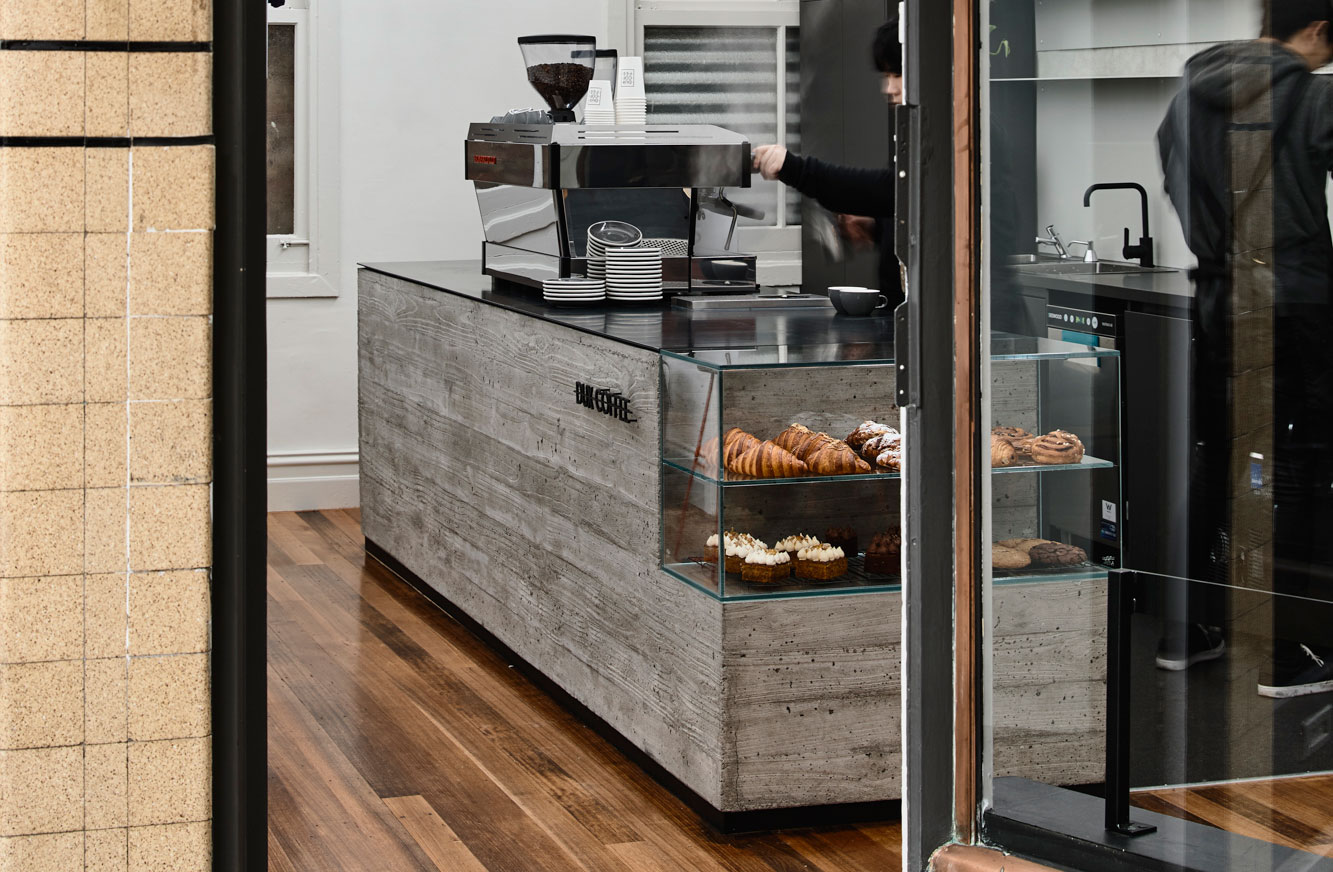 The tiny Dux Coffee “hole in the wall” in the inner city suburb of Hawthorn is taller than it is wide, with a raked ceiling that measures 6.5 metres at its highest point, Pierce Widera director Amy Pierce tells ADR.

“The challenge became fitting in everything that’s necessary for running a coffee shop while emphasising the height of the space,” she says.

“The floorplan was highly resolved and compact, ensuring the space was both functional and impactful.”

The concrete bar at the centre of the space was made using a board-formed concrete process in which timber panels pattern the structure with a timber grain finish. Here, it’s topped with a steel counter and a glass display case.

“We chose the board-formed process because we wanted to create a contemporary, monolithic block to contrast against the Heritage features of the site,” explains Pierce.

“Due to size constraints, the concrete ended up being a very experimental element — we had to keep its thickness to a minimum, but we only had one shot at it because of time constraints,” she adds.

“It was quite nerve racking, but once the timber boards were removed and the end result was revealed, we all felt a real sense of pride and achievement. The timber grain softens and warms the concrete’s appearance.”

Located in the Don Arcade, Dux Coffee was designed to draw the attention of the university students that walk past on their way from the train station.

But it was also important for Pierce Widera to “tell the story of the evolution of the site”.

The studio restored and retained the building’s old rafters, clerestory windows, pressed metal ceiling and rich copper facade detailing, bringing these features to light from “behind layers of dust”.

It also chose to leave the existing blocked off windows and door that once connected to the neighbouring shop visible, as a “nod to the past”.

However, the existing timber floor was impossible to restore and was replaced with recycled timber, which provided a “rich foundation” for the other materials used.

Directly behind the concrete bar is a bagged finished brick wall paired with pale grey powder-coated metal splashbacks, both of which are designed to blend in and create a neutral backdrop.

“The back bar has been kept deliberately subdued, focusing on functionality,” says Pierce.

“We chose the fiery powder coat to cut through the neutral palette and create a sense of energy. It also draws your eye to the minimal design menu board, an important part of the client’s offering.”

Pierce Widera completes the space with two suspended pendants that hang from the ceiling, “exposing the sheer height” of the space and providing an “almost sculptural element”.

Pierce Widera is a design practice founded in Melbourne in 2017 by Amy Pierce and Nat Widera.

The studio is also behind Peaches Cocktail Bar, which is like something out of a child’s mood board, if that child lived for Miami Vice and oversized philodendron.