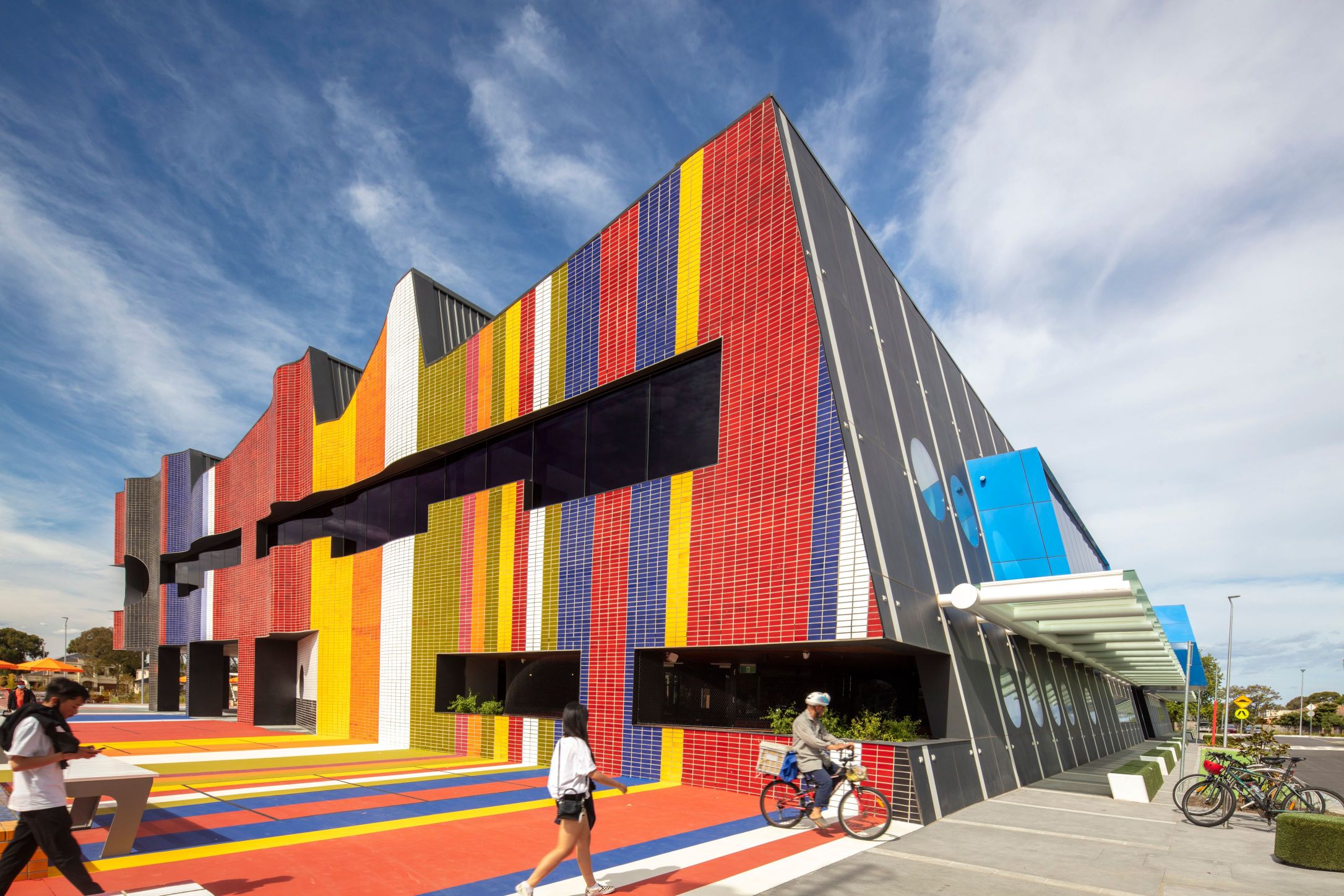 A “rainbow” of custom glazed bricks on the facade of the Springvale Community Hub were designed by Lyons to reflect the cultural flags of Australia’s most diverse area.

Completed in 2020, the hub consolidates the Springvale Library, Springvale Historical Society and the Council Customer Service into one 3800-square metre space in Melbourne’s outer south east.

After winning the tender for the project, Lyons consulted with the Greater Dandenong Council and multicultural community to produce a final design that responded to the “urban context” of Springvale.

“Springvale has a large Vietnamese population as well as residents from more than 99 other birthplaces,” says the practice.

“Our precinct design is laid out in a series of layers of history, at the centre of which is a flowing landscape inspired by the immigrant journey – a community path linking together the landscape with the building itself.”

Lyons designed each side of the Springvale Community Hub to “reflect a different aspect” of the suburb.

The custom-glazes Euroa Clay bricks on the western facade are joined by vertical cat-eye reflector bands that “catch the lights” of passing cars on the southern facade.

The building’s eastern elevation “mimics” the suburban pitched roofs of the area in brown and terracotta, while the northern facade “curves around” a number of river red gums with timber fins and reflective glass panels.

“Rather than removing the trees, the design curves around the old gums, honouring their presence,” explains the practice.

“The trees also help to shade external patio areas and increase views to nature from the inside.

“Showing this equal consideration for the built and natural environment represents their equal value and invites the community to engage in both spaces.”

Alongside the gums, landscape architect Rush Wright Associates inserted an array of native and immigrant plantings, winding them around the building and throughout the outdoor spaces.

Designed for locals to “wander and play”, these outdoor areas include multi-use courts, playgrounds and a bathroom.

The large landscaped area with “playful fountain” features barbecue areas, play equipment for children and active physical equipment for adults, along with a sloped “green” for community events and gatherings.

Inside, the library’s ground floor opens with public amenities and the Community/Customer Service Hall. Here, Lyons reproduced the reds of the Enterprise Rose – a “symbol of hope, safety and beauty to more than 30,000 immigrants and refugees.”

The Enterprise Rose is a hybridized rose created in 2012 to honour the rose garden of the Enterprise Migrant Hostel in Springvale.

It has been adopted by the local council and is used for presentations at official functions and in various gardens around the municipality.

To the left of the foyer, the library entrance connects to the Technology Hall, Children’s Library, Junior Space and cafe. A feature wall welcomes visitors in multiple languages.

Upstairs are more computer areas, casual seating, rooms for hire and the Language and Literacy Office.

“The multi-modal interior spaces are open, flexible and light-filled to welcome all members of the community again and again,” says Lyons.

“Each space is designed with the colours of Springvale, sampled from the flags of the many nations that comprise the area.”

Glazed windows designed to reduce the need for artificial lighting add to the sustainability features of the Springvale Community Hub, which is 5 Star Green Star Plus rated and carbon neutral.

Lyons is a national architecture and urban design practice. Its also behind the Joan Kirner Women’s and Children’s Hospital, which was designed to “reduce stress and enhance the experience of patients and families”.