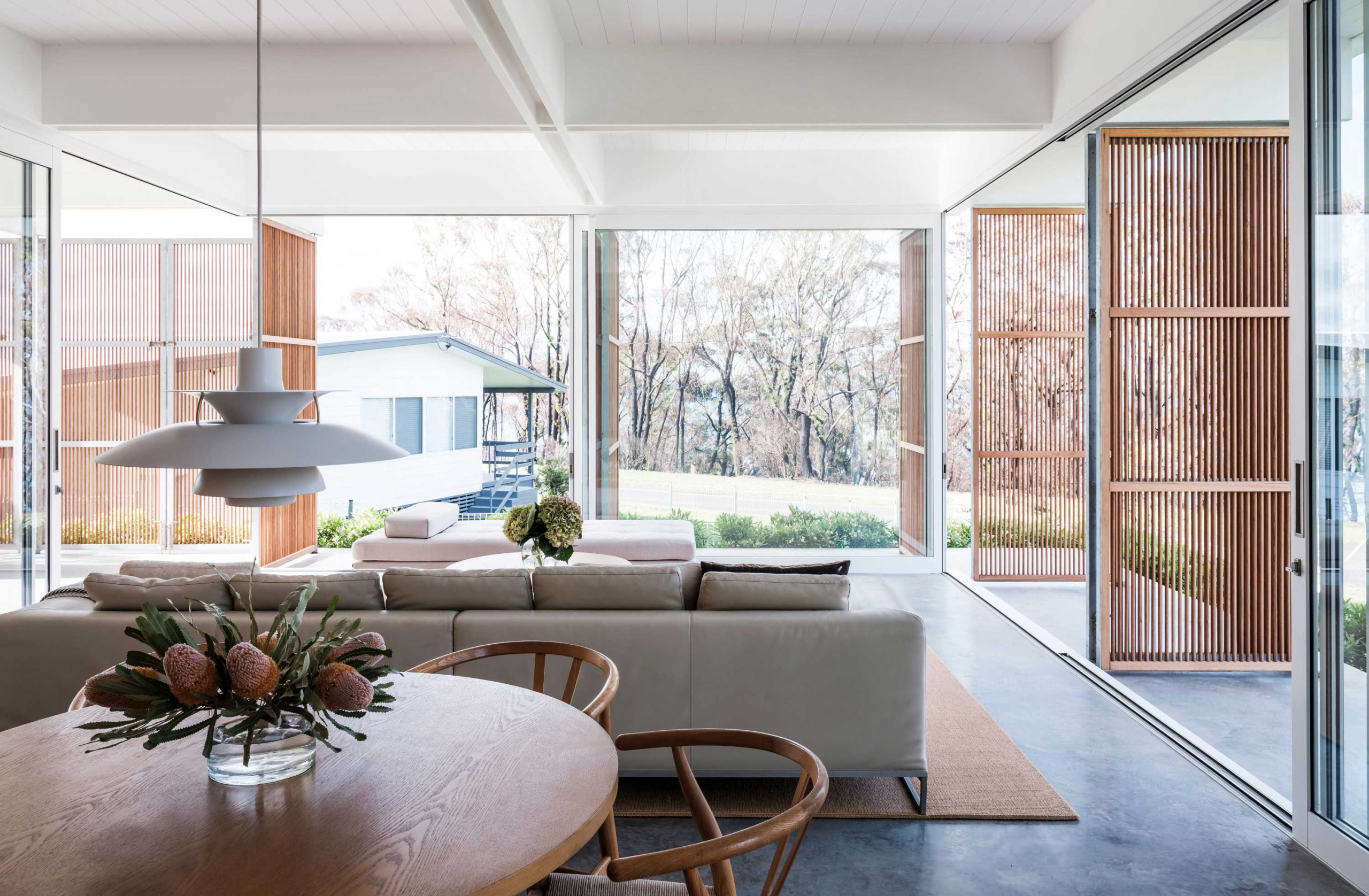 Madeleine Blanchfield has created a “raw, honest and simple” beach house for her retired parents in the south Sydney coastal town of Bendalong.

Drawing from the area’s “easy-going” holiday shacks and working to a “relatively low budget”, Blanchfield’s eponymous practice designed the home to accommodate visiting family and friends.

“We wanted to be respectful of the casual coastal appeal and kept the living pavilion single storey and low to the street,” says Blanchfield.

The front garden is grassed and “given over” to the public realm, a feature inspired by the local owner-built beach houses, which don’t have front fences.

“Kangaroos and birds literally inhabit the house, and it is has the ability to be so open that people are inclined to wander in for a chat.”

Blanchfield says she really wanted the architecture to be “humble and unsuperfluous” in an effort to bring a sense of calm and authenticity to the spaces.

“As with all apparently simple things an immense amount of care went into perfecting many design iterations and finessing the precision of details.”

The main pavilion, designed around passive solar principles with solar power and a heat sink in the concrete floor, is a square divided into four equal areas – living, dining, kitchen and outdoor room.

The concrete slab is the finished floor and the steel columns support the roof with a “visible and comprehensible” structural system.

The whole pavilion is then layered with column-free glass, covered terraces and a continuous border of plants.

Operable timber screens sit between the glass line and perimeter columns providing both sunshading and a buffer for privacy.

“We joke that it is ‘fancy camping’, just a floor and a simple lean-to roof in the environment,” says Blanchfield.

“When everything is opened up there is almost nothing; a sense only of the landscape, light and garden in all directions.

“When screens are closed, the space is shrouded, flooded with dappled light and provides a completely different experience.”

Bedrooms and bathrooms are at the back of the site in a more solid, private two-storey pavilion fronting a north facing garden.

“The beauty of the house is the experience of being in the main space; the lightness, sense of tranquility and awareness of the site rather than of the architecture,” says Blanchfield.

“The unconfined nature and ease of movement through the four spaces is unusual and very special.”

Inside, walls and joinery are made from plywood. The only other prominent material is sustainability and locally-sourced hardwood, which is used as cladding, in the screens and for the large kitchen island bench.

A concrete planter bed forms a plinth for the living pavilion to sit on and is paired with a vegetable garden and grass driveway, fed by water tanks.

“Plants are a prominent part of the materiality of the house as they surround you in the space and add a layer of privacy,” says Blanchfield.

“The living pavilion feels edged by screens and plants rather than walls or windows. As a result the border between inside and out is almost removed and spaces feel expansive and calm.”

Bendalong Beach house sits in a bushfire-rated area, and Blanchfield says she was worried about the property, which was only just completed before this year’s bushfires.

“Timber screens were intended to play on the surrounding gum trees and blend into the bush setting,” she says.

“Sadly the whole of Bendalong burnt in a raging fire over the New Year period. The house, built to BAL 19, survived, but all the trees are now black and bare.”

Despite this, her parents have chosen to make a permanent sea change.

“Since completion they have moved in permanently. They love being there, which is the greatest complement a child or architect could receive.”

Madeleine Blanchfield Architects is a studio of eight architects and interior designers based in Paddington since 2009.