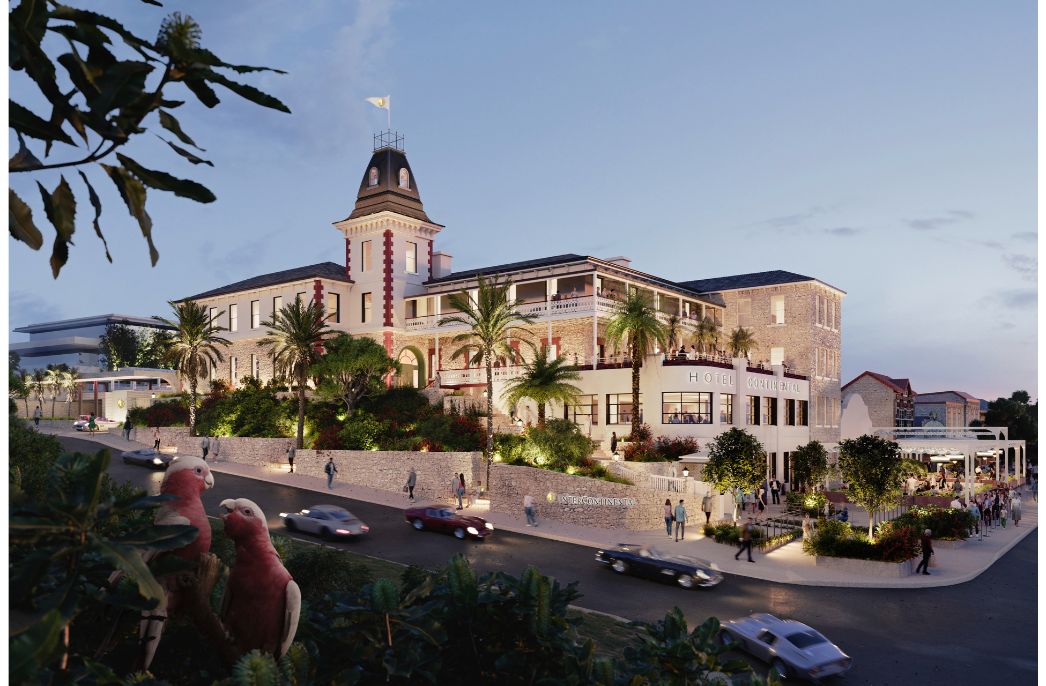 Led by Woods Bagot, The Continental Sorrento is set to be an “extraordinary first-of-its-kind” goody bag of vibrant hospitality and luxury accommodation for locals and tourists to enjoy.

The long-awaited $120 million redevelopment is owned by a consortium that includes Victor Smorgon Group, the Kanat Group and developer Trenerry Property.

Its global CEO Nik Karalis, who owns a property on the Peninsula, adds that he “jumped at the prospect” of working on such a significant project in his backyard.

“We have been working together with a future-focused ownership group to create a series of experiences that will unify,” he explains.

“In other words, people don’t have to leave the venue because there’s so much to fulfil a whole day’s itinerary.

“My dream is you’re going to come to the Mornington Peninsula and want to stay at The Continental and be totally enthralled by the pleasure it offers.”

Karalis also says the project will “shift people’s perceptions of what hospitality is in Australia” with a series of curated food and beverage venues from Scott Pickett of Matilda, Longrain, Estelle and Chancery Lane set to be included in the precinct, alongside Lyndall Mitchell’s Aurora Spa & Bathhouse.

As for The Continental itself, it’ll feature a fine-dining restaurant named after Pickett’s grandmother, as well as a public bar, beer garden, conservatory, late-night venue, pool-side dining and sunset roof deck.

The Aurora Spa & Bathhouse will also offer a fully immersive thermal hydro experience with nine spaces that include a float room, wellness boutique and relaxation lounge.

Architecturally, the project has presented as one of the most complex Karalis has ever worked on, with the six-level building complicated by its previous lives and Heritage characteristics.

“We had to instil new energy into the existing fabric of the building,” he explains.

To do this, Woods Bagot merged the original 1875 character of the former Hotel Continental with the modern composition of The Continental in what it describes as a tribute to the late entrepreneur George Coppin.

Part of this multifaceted refurbishment, includes the restoration of the original Grand Ballroom.

“At the time, Coppin called it the Magnificent Ballroom, and it has that spark of Heritage and European grandeur that he was trying to introduce to Victoria back in 1875,” says Karalis.

“My ambition is to do that again 146 years later. Coppin was a genius and he’s our singular muse for this project.”

Woods Bagot is a global architecture studio with 17 studios across six regions and a portfolio of projects currently underway in North America, Europe, Asia, Australia and the Middle East.