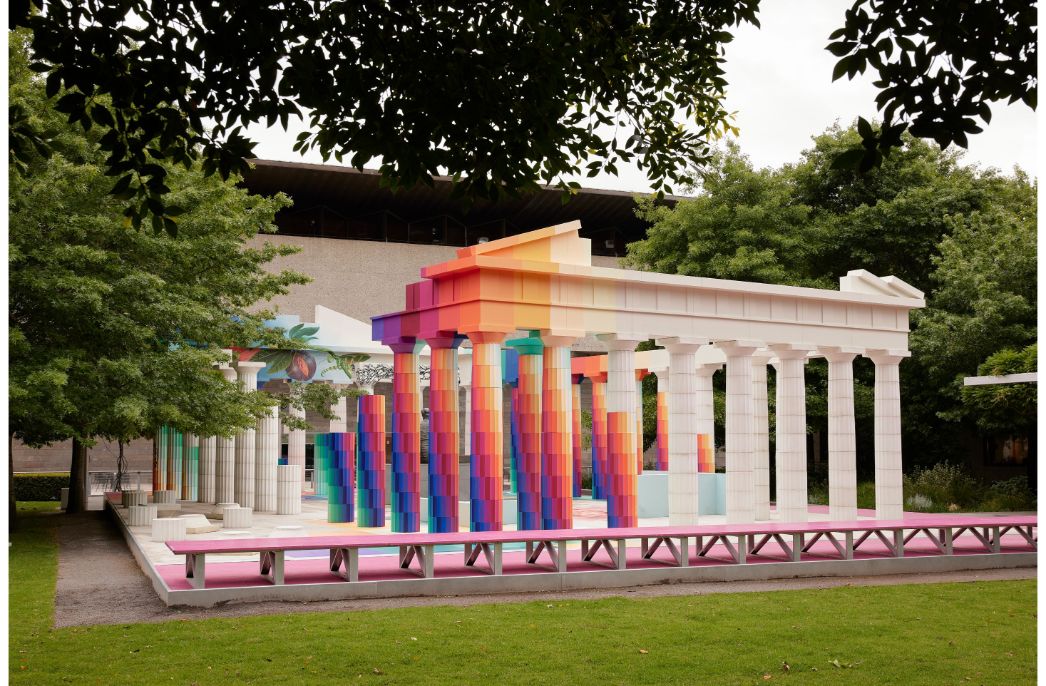 Designed by Melbourne-based architects Adam Newman and Kelvin Tsang, Temple of Boom has been unveiled in the NGV Garden.

Now in its seventh iteration, the commission is a chance for architects and designers to pen a temporary pavilion to be displayed throughout the summer at the NGV International’s Grollo Equiset Garden in Melbourne.

Newman and Tsang were inspired by the global architectural icon, The Parthenon, in their winning Architecture Commission.

As an apex of Western civilisation, democracy and perfection, The Parthenon is celebrated for its iconic and enduring beauty.

Temple of Boom is built to a third of the scale of the original building and invites audiences to “consider the effect of time on architecture as the structure gradually transforms with large-scale artworks and murals painted by local artists in three phases” between November and August 2023.

Influenced by the colourful and artistic embellishments that once adorned the original building over 2000 years ago, Temple of Boom makes its entrance with high-powdered designs ranging from floral motifs to optical illusions by contemporary artists Drez, Manda Lane, and David Lee Pereira.

Drez is a multidisciplinary artist based in Melbourne who uses colour and form to play with perspective. For this installation, Drez has created a boldly colourful mural that changes composition when viewed from different angles.

Lane is a muralist, illustrator and paper-based artist in Collingwood, Melbourne. For Temple of Boom, Lane has depicted various growth behaviours of plants, creating a visual metaphor for personal expression and growth.

Visual artist Pereira explores the fluidity of gender, sexuality and identity. Influenced by the work of impressionist and surrealist artists such as Salvador Dali and Edvard Munch, Pereira has decked out the structure with large-than-life floral motifs that draw attention to nature’s flamboyant use of scent and colour to allure pollinators.

Taking its name from the vibrations of music, Temple of Boom will be a community meeting place and an outdoor venue for a diverse program of performances, programs and music across the summer period.

NGV director Tony Ellwood AM says the Parthenon is “one of the most famous examples of classical architecture”.

“The Parthenon in Athens is often viewed as a potent symbol of Western art and culture. This thought-provoking work by Adam Newman and Kelvin Tsang invites us to consider how we create and imbue architecture with meaning, as well as how this meaning can shift across time periods and cultures.”

Presented in partnership with the Hellenic Museum Melbourne, audiences can engage with a program of panel discussions, performances, and a VR experience transporting visitors to The Parthenon and allowing them to walk virtually around the Acropolis in Greece.

The historical and cultural significance of the Parthenon and its continuing resonance with the Greek diaspora will be celebrated with further programming across the nine-month installation.

The 2022 NGV Architecture Commission will be on display at Melbourne’s NGV International from 16 November 2022. Entry is free.

You can also catch some of Melbourne’s best DJs who will perform weekly from 16 December as part of the return of NGV Friday Nights this summer.

Adam Newman is an architect at NWMN, his principal focus is on adaptive building reuse and regeneration through the lens of conscious engagement with local ecologies.

Kelvin Tsang is the lead designer and technical director at NWMN. His interests lie in using narrative-driven architectural design and image production to promote conversations about architecture’s role as a driver of positive change.

Also in Melbourne, HAY has made its grand entrance in Fitzroy with its second Australian retail store.

‘This is not your typical bakery’ – Ewert Leaf on Lune Armadale