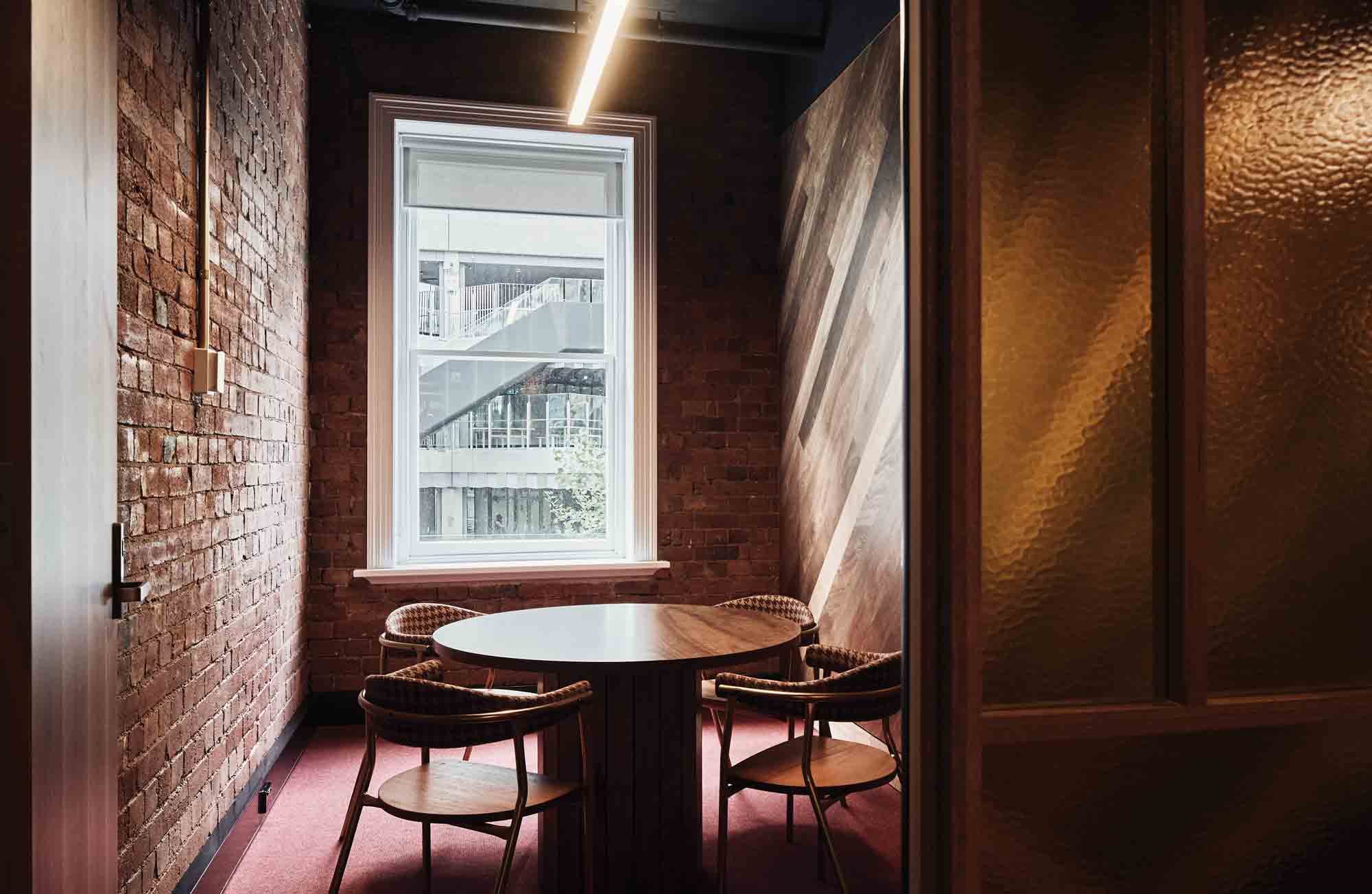 In designing the new Oxford Scholar, March Studio brought the personal as well as the expertise learnings of RMIT to the project.

When a student at RMIT, Rodney Eggleston, now director of March Studio, was being critiqued by the much respected professor Peter Corrigan AM (notably the designer of Building 8 at RMIT and Athan House).

“My girlfriend at the time, now my wife, had dressed me in a tweed jacket and there was a bit of a joke going around. The concept was fine, but he didn’t appreciate a young student wearing tweed and I was told ‘you have got to earn your tweed’,” says Eggleston. 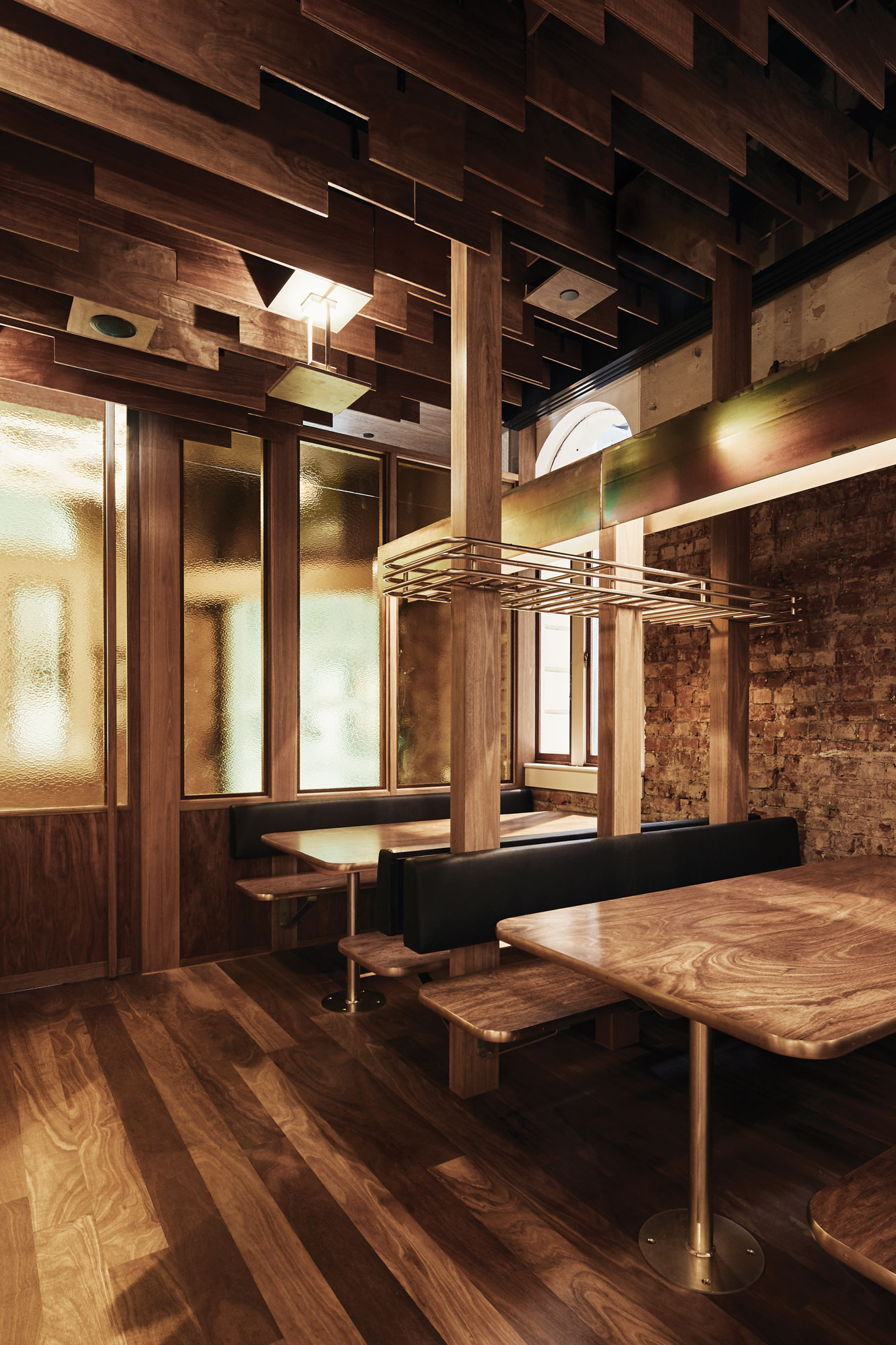 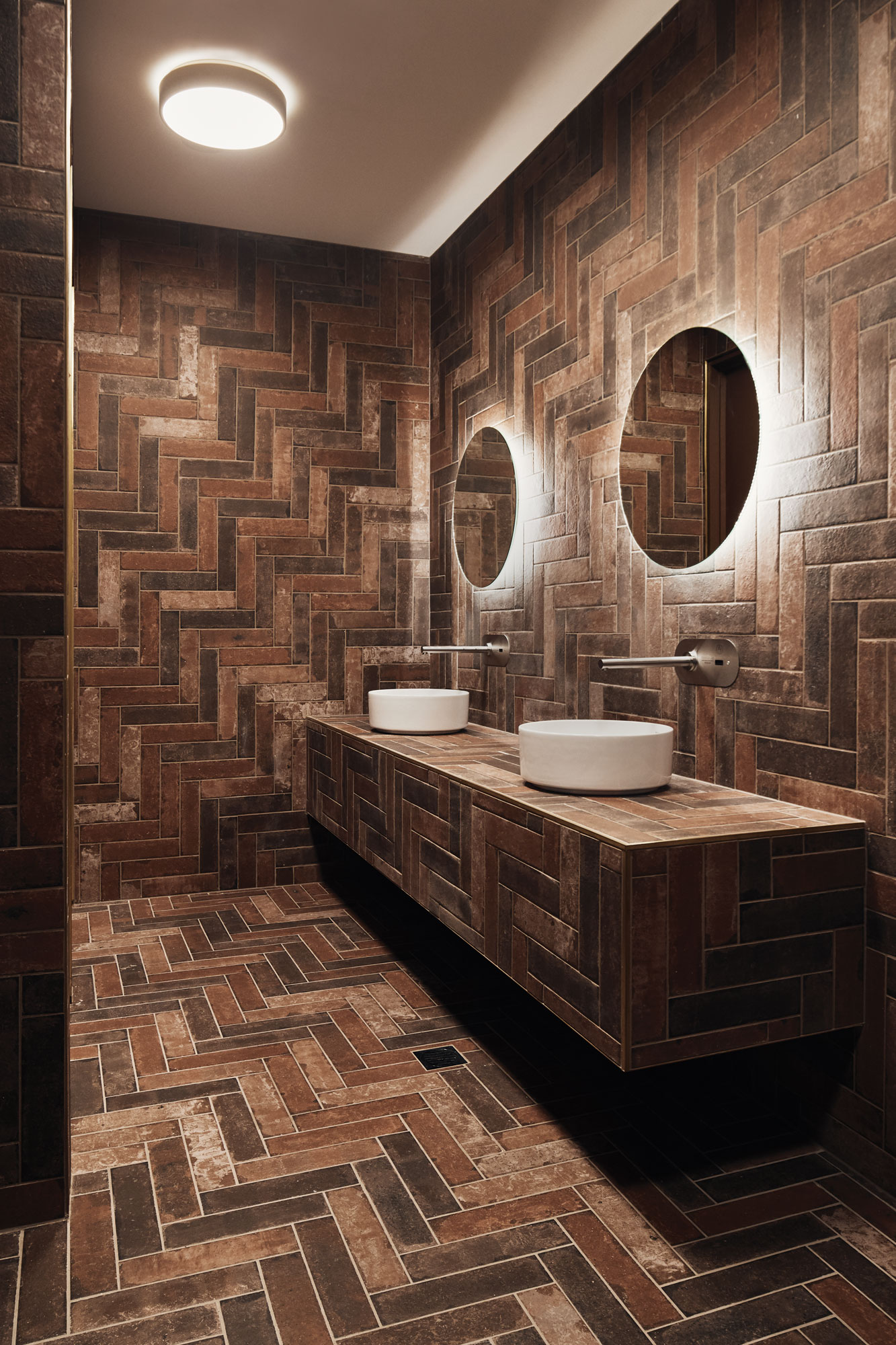 This memory formed the nexus for March’s design for RMIT’s Oxford Scholar, where the idea of tweed acts as a leitmotif running from the ground floor up.

“If you have to earn your tweed: the ground floor is twill; a beginner or student’s tweed, the third level could be herringbone, which is sort of a tutor’s tweed and the top floor is a professor and dean’s and that is the top of the line houndstooth tweed,” says Eggleston.

Unpacking tweed as geometrics and suggestions of shapes drawn from within the various tweeds, the patterns are worked into the design rather than plastered on as on overlay. The material of choice is spotted gum, sustainable and Australian, the solid timber brings a feeling of the local to the space, while allowing a single material to be used to articulate three different tweeds.

On the ground floor, the solid timber and Armapanels form neat rhythms, with panels arranged as a repeating pattern of simple geometries. The exterior awning, for example, has the rhythm of twill down pat as a simple zigzag that reads as more or less pronounced depending on the angle of view, just like twill.

Within, the rhythm becomes slightly subtler with ceiling batons arranged to read as twill from only the side angle. Otherwise, it is a seemingly simple arrangement of geometrics. 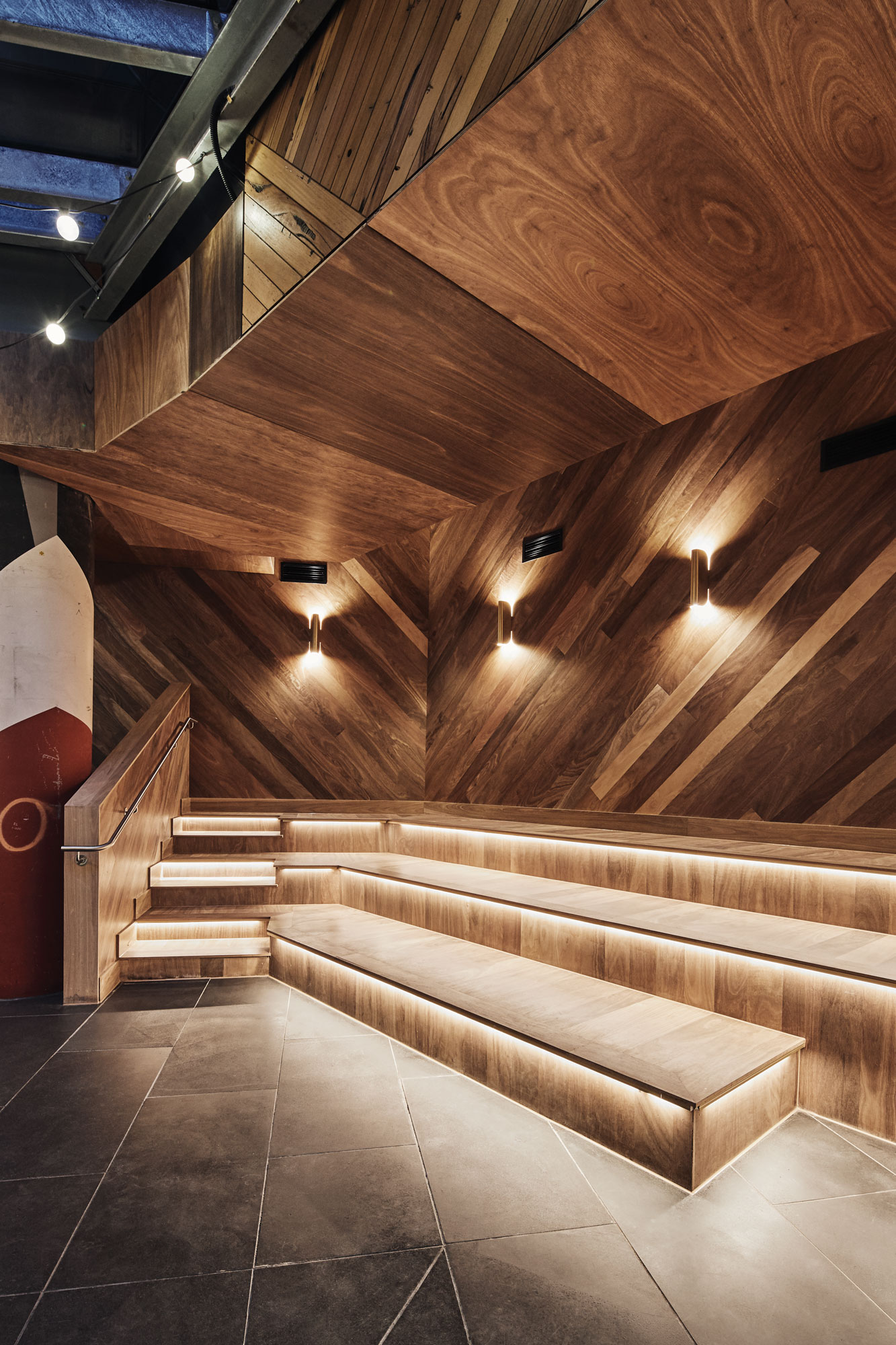 As an RMIT alumnus, Eggleston’s relationship with the Oxford Scholar was typical: “Most students have at some point had a pot of beer or a chandy at the Oxford,” he says.

It also meant a first-hand experience of various past iterations. A 1980s mock seventies treatment in particular stays with him. More recently, the SAB (Swanston Academic Building) had been amalgamated into the Oxford’s Heritage building via a courtyard and the appropriation of several floors.

More recently still a giant seven-storey MMRA (Melbourne Metro Rail Authority, now Rail Projects Victoria) building has been erected immediately beside the Oxford. Granted in eight, which probably means 10, years the building will be removed and a park built. In the meantime, the Oxford has for all intents and purposes vanished.

March’s response has addressed all of these concerns at once through an inward looking aesthetic that, while enjoying the English pub sensibilities, has rejected any ‘ye olde English pubbe’ clichés. 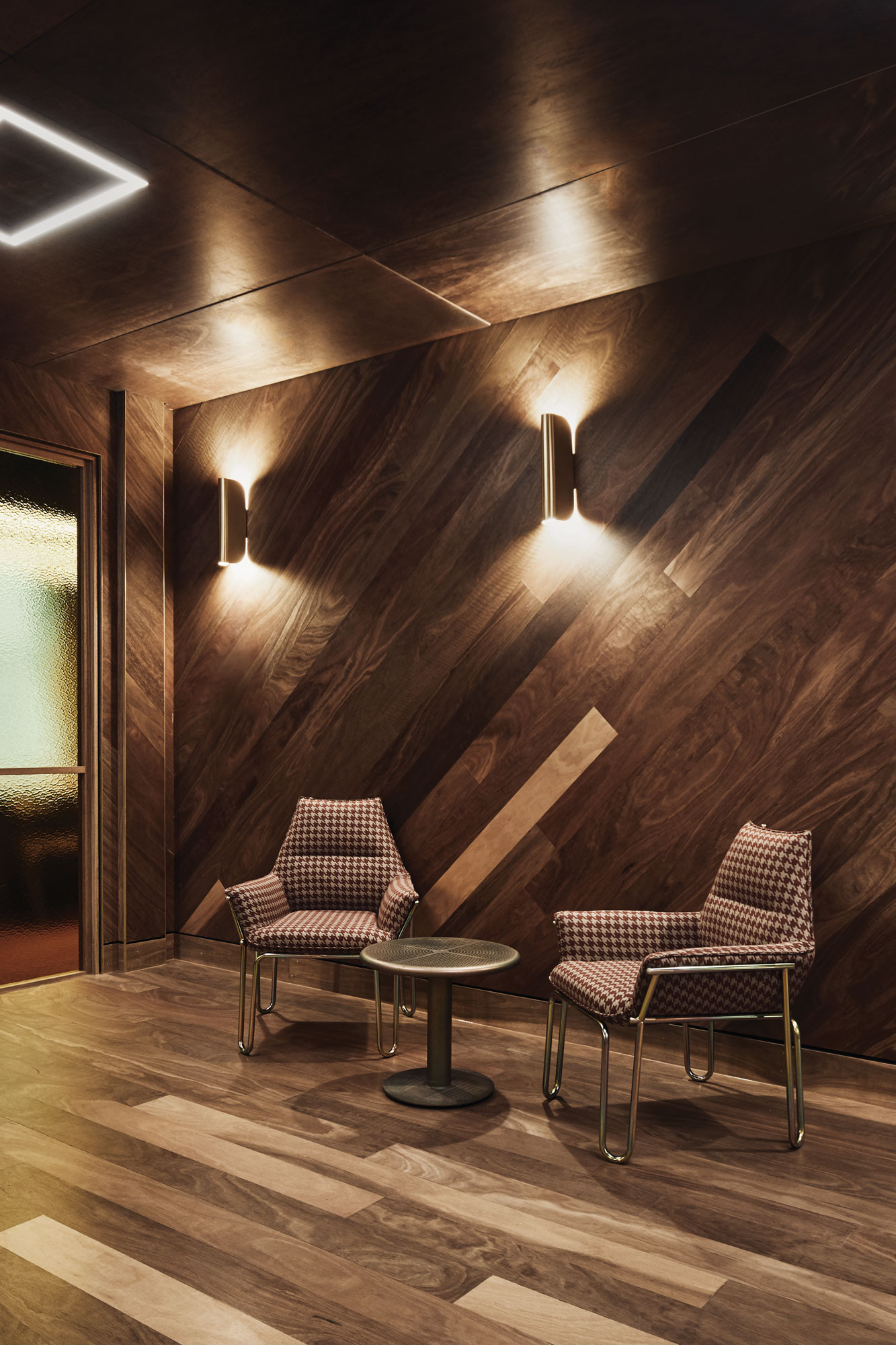 “The concept takes a holistic approach to the stuffy English pub, and then there is the name! It felt like it was time to reinvent that, keep it warm and comfortable, and work on the tonal qualities without doing a replica pub,” says Eggleston.

Instead, the timber, brass and glass continue the tonal balance while investing the whole with a rich contemporaneity. Moreover, the design further blends the Oxford into the city.

“As a student studying there, between the city and the campus it is hard to know where one stops. RMIT as a city campus has that feeling and that is, I think, unique to the university,” says Eggleston.

The fitout saw the removal of four or five iterations, significant upgrades to floors and structural upgrades to meet code at higher capacity. In doing so the floorplan was readdressed as a means to provide a larger range of usable options. 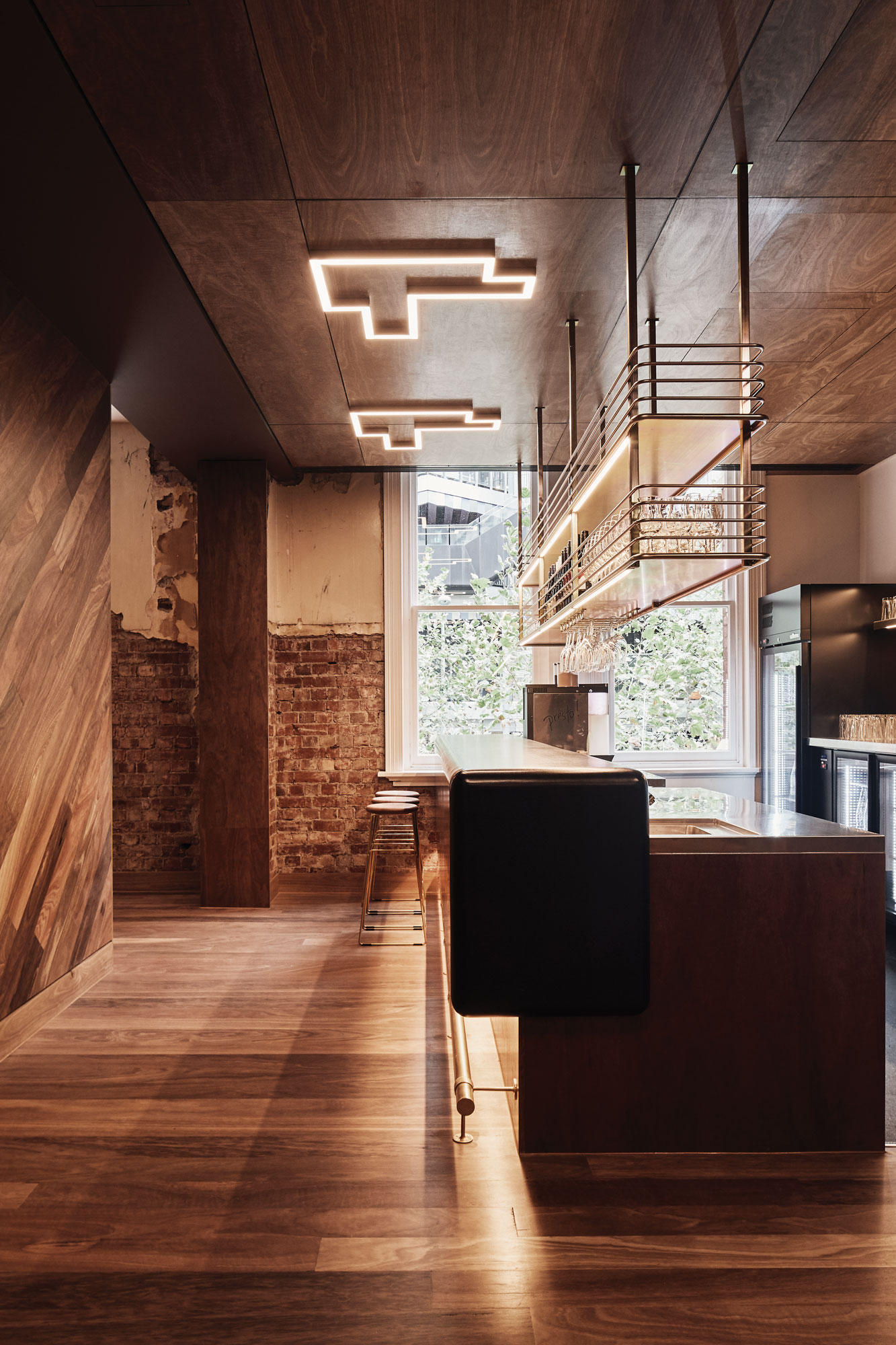 The ground floor remains the pub, with general public access and booths with all the power points needed for casual group collaborations. This includes the former courtyard, which has been glazed in and now performs as an open teaching-learning platform while stitching the SAB and Oxford visually as a continuum. Moreover, the glazing mitigates the dust and noise of the MMRA activities.

Fitted out with tiered seating, the space can be booked for presentations, PhD reviews and such.

“It extends the university campus and challenges what a teaching and learning space can look like. Obviously, we have all had a drink at the Oxford, so when something goes for three or four hours why can’t you have a pot of beer and something to eat at the same time,” says Eggleston.

Experientially, the result is astounding, with a pub atmosphere delivering a new sort of engaged classroom where the general public walk in and around the learning environment. It also makes a lot of sense for design students to learn about design in an architecturally alive environment.

The first and second floors, with herringbone integrated through upholstery and the herringbone arranged brick- faces of the bathrooms, has been reconsidered as a range of different sized rooms that RMIT faculty and staff can book.

The idea is that faculty, which is renowned for doing this well, can host functions and entertain on campus with an end of semester party or such. The upper floor is for deans and professors and here the houndstooth motif is drawn in LED as a single unit of houndstooth lighting. Neat.

Typical of March Studio, the design uses very few materials, but in a seriously interesting way. Spotted gum, brass, electroplated steel, glass and bricks are the main. Furniture and lighting are a similarly key element with Egleston preferring to engage custom solutions from the outset.

In this case, all the lighting was designed in-house, including the OX signature pieces, while furniture is by Dowel Jones, another RMIT alumnus. The resulting interior is fabulous, with collaborating alumni each earning their tweed.