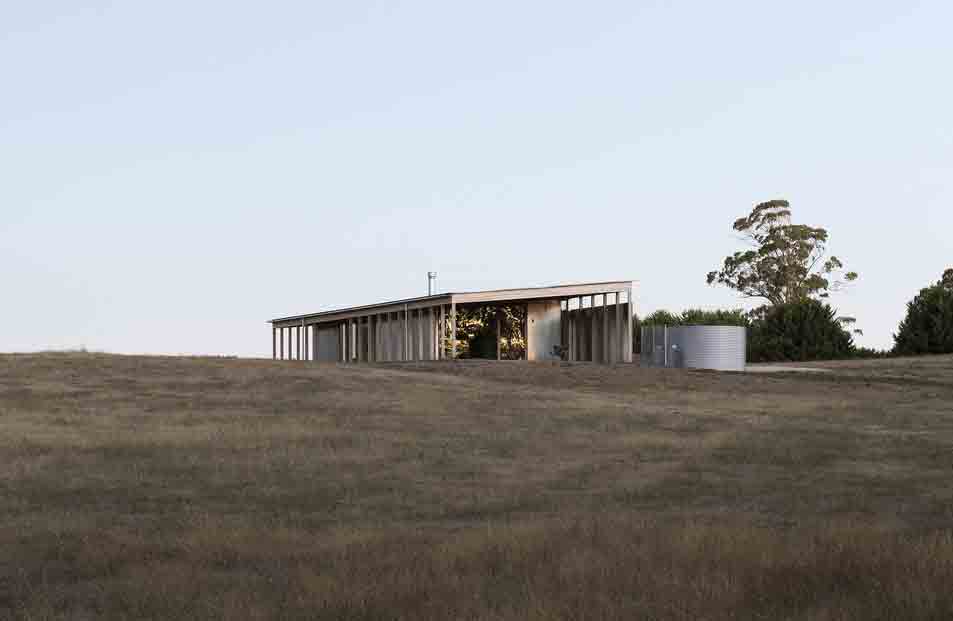 Melbourne-based architecture studio Lovell Burton has been awarded the ArchiTeam Medal for its galvanised sheet metal-clad Springhill House project in the Macedon Ranges.

Lovell Burton was one of 14 practices or individual architects to be recognised with an award or medal at Wednesday night’s Architeam awards gala.

The ArchiTeam Medal is awarded to a category-winning project that achieves general excellence and is one of three medals awarded on the night.

The others are the Small Project Medal, which was awarded to Torquay Compartment Apartment by Winter Architecture, and the Sustainability Medal, which was won by Owl Woods Passive House by Ballarat-based Talina Edwards Architect.

The ArchiTeam judges commended Springhill House for providing a strong and inviting sense of protected enclosure that respects the local vernacular of its location in the Macedon Ranges and its wider Australian context.

“The siting and utilitarian material palette reference local hay sheds with detailing that is highly skilled. The approach to sustainability and efficiency in the deployment of materials and planning is commendable,” said the judges.

The Vectorworks Emerging Architect Award was awarded to Ben Callery of Ben Callery Architects. The judges said his work, which easily combines design and sustainability into strong and clear architectural form, offered a glimpse into the future of architecture.

The Australian Window Systems Residential New Award was awarded jointly to House at Otago Bay by Topology and Springhill House by Lovell Burton.

The judges described the site-specific House at Otago as succeeding in offering occupants a heightened reading of the setting as they move through and beyond the house, choreographing poetic moments of shelter and prospect.

The Springhill House project was described as a refreshing take on an iconic Australian typology, but a reductive and accomplished work of architecture, at once familiar and entirely fresh.

The recently-added Brickworks Materiality Award was awarded to WOWOWA Architecture’s Kalora Park Sports Club for how the designers deployed brick pixels as a graphic tool to emphasise the architectural language and the club’s identity.

The Built Environment Channel Commercial Award was won by Olaver Architecture with their project Future Future.

The judges said Olaver Architecture had delivered a fresh and innovative iteration of a well-loved architectural genre, the restaurant in a Victorian shop/dwelling.

The Living Fire Residential Alterations and Additions Award was jointly awarded to House N by Joyce Architects and Limerick House by Solomon Troup, with the ArchiTeam judges highlighting how both projects provide exemplary outcomes to alterations and additions of existing buildings, which required vision and conviction from the designers.

New Modern by Bower Architecture and Interiors received a commendation.

The Unbuilt Award was awarded to Förföra by Tessellate a+d with commendations to Nightingale WOW by WOWOWA Architecture and the Drop Leaf Table by tsai Design.

In the judge’s citation, it was unanimous that the building expresses the full gamut of what an architect can do beyond straight-up professional services from imagination, inspiration, community engagement, leadership and even activism.

A commendation was awarded to Western Desert Clinics by Kaunitz Yeung Architecture.

This year’s Melbourne School of Design Contribution Award was awarded to EBD Journal by EBD Architects. The judges agreed that it was a highly valuable, detailed work that researched more than 200 projects and many journal articles.

A commendation was awarded to Architecture and Alterity by Anthony Clarke.