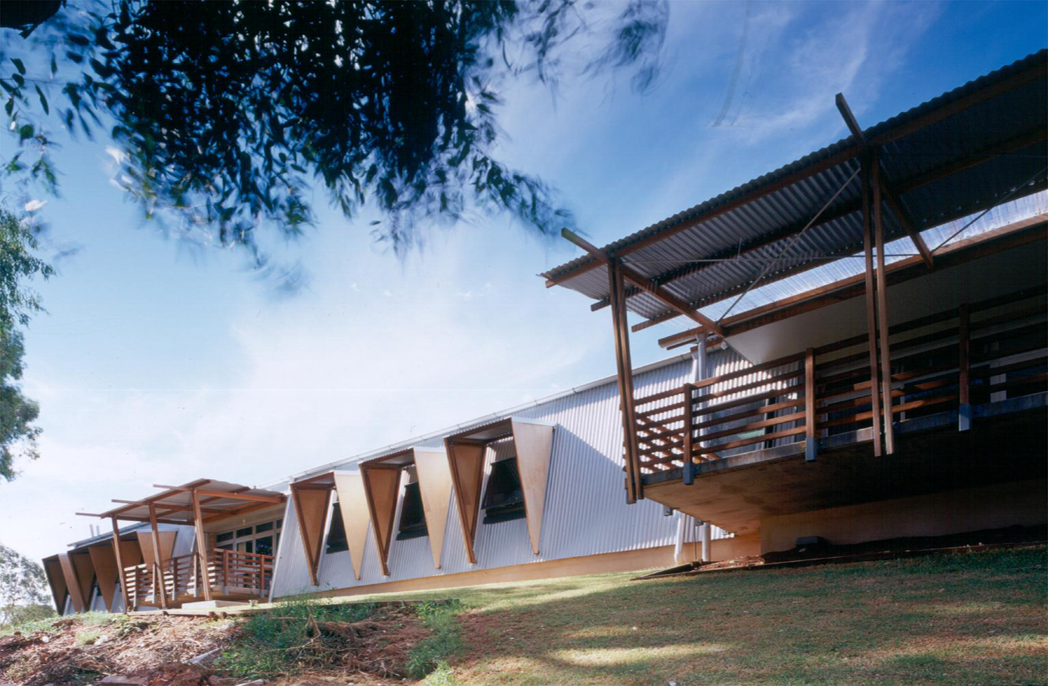 We have chosen to republish this 2018 piece in light of the Black Lives Matter protests currently taking place across the world. This is part of Australian Design Review’s commitment to advocating for the mending of racial inequities in Australian architecture and design industries.

Hosted on the Yalukit Willam land of the Boon Wurrung people, in a leafy clearing of Melbourne’s verdant Royal Botanic Gardens civic space MPavilion hosted BLAKitecture in late 2017, a public forum discussing how the architectural industry might respectfully embrace Aboriginal and Torres Strait Islander culture at all levels of the design process.

It highlighted a striking fact: there are only five practising Indigenous architects in Australia. There’s a growing sense that unless we encourage more First Nations voices to join the architectural industry, becoming an active part of the country’s built future, we will be all the poorer for it.

One of the keynote speakers at the BLAKitecture event, Jefa Greenaway of Greenaway Architects has been a loud and proud champion for this very cause. The only registered Indigenous architect practising in Victoria, the Wailwan and Kamilaroi man is the co-founder of Indigenous Architecture and Design Victoria (IADV), a not-for-profit organisation with dual priorities.

It aims to facilitate First Nations interactions with the design professions, including architecture, by increasing the visibility of Indigenous practitioners, highlighting a focus on people, place and purpose. It also challenges non-Indigenous architects and designers to be more engaged with our rich Aboriginal and Torres Strait Islander heritage.

“I guess now there is that cultural maturity to have these conversations where perhaps in years gone by it wouldn’t have resonated in the same way,” Greenaway says. He points to the Victorian Government considering a treaty as a clear sign of this maturity.

“So there is an appetite, a thirst to engage in meaningful ways beyond the simplistic, and there are also a huge number of projects that interface with Indigenous culture, so there’s now an actual tangible need for Indigenous people to be contributing into this space.”

He says the best way to do that authentically is by having Indigenous voices as active participants in the process beyond advisory roles, “actually with a pen in hand, co-designing projects and expressing the will of the community”. Recently attending the second Nā Te Kore Biennial International Indigenous Design Conference across the pond in Christchurch, Greenaway was inspired by their approach to rebuilding the city after the devastating earthquake of 2011. “Part of the conversation was to amplify a strong connection to Māori culture, revealing layers of history and meaning that were there pre-contact. Out of a catastrophe comes an opportunity to do things a little differently,” he says.

“By having a dialogue with the key peak bodies we can develop partnerships where we can start to normalise a connection to Indigenous culture within the built environment,” says Greenaway. “Within my practice, I’m endeavouring to break down the silos and say it all comes from the same well of creativity.”

The starting point centres on cultural competency. “If you’ve never interfaced with Indigenous culture before, there’s a need to skill up, to understand some of the history,” he stresses. “You need to develop a language and to contextualise those understandings in order to move forward, enabling non-Indigenous practitioners to engage with the broader issues. There’s also a role to play for Indigenous organisations to champion the value proposition of connecting with design disciplines.”

Visibility is key. “There’s much to be done, but there is also now a real acute interest, and we are being engaged with at many different points by a range of stakeholders from municipal councils to state government, from peak bodies to universities, and to the architectural profession.”

Dillon Kombumerri, a principal architect in the Office of the Government Architect NSW and a Yugembir man, hadn’t contemplated architecture until a career adviser recommended the profession in his first year at Cleveland High School near North Stradbroke Island. “I have this tendency to march to the beat of my own drum and architecture appealed because it was an unusual profession to my family and friends.” Attending the University of Sydney, he found settling into a new city isolating at times. “The most difficult thing was not having Aboriginal peers,” he says.

“Although I got home quite often for term break and I did have some family come down and train to be dancers at the National Aboriginal Islander Skills Development Association, within the faculty and more broadly at the university, I didn’t feel there was as much support.”

While Kombumerri acknowledges representation may have improved at some universities, he prospered mostly with the support of non-Indigenous mentors, including the late Colin ‘Col’ James, who connected him with the Aboriginal Housing Company. Once Kombumerri was in practice, then government architect Chris Johnson encouraged him to assemble a team of Indigenous architects, Merrima aboriginal Design (now Merrima Design), alongside co-founders Alison Page and Kevin O’Brien.

“What does it mean to be connected to country and to interpret that connection in the built environment?” Kombumerri recalls thinking. “I didn’t have anybody to talk to about these ideas, so when they came it was just a wonderful way of thinking and creating solutions.”

There’s no short fix when it comes to encouraging Indigenous architects, Kombumerri says. “The investment in time is probably 10 to 15 years, to get somebody interested at high school, then direct their studies, because you need the discipline that comes with a six-year course.”

That requires financial investment too. “There are plenty of scholarships out there, but they are for kids already in an architecture degree and I keep saying to the people putting that money up that they are not coming through enough. You need to get the money in earlier.”

He suggests funding should come in year 12, perhaps in the form of a gap year placement with international architectural offices that have connections in Australia, on the proviso that it leads to enrolment in an architectural degree, with further financial support available once there.

Recalling his lack of peer support, Kombumerri recommends scholarships be offered to groups of at least two Indigenous students. Architectural practices in the city might also partner up with regional offices to offer term break placements, so students can return to country.

Leadership has to come from the top. Kombumerri suggests that the AIA could nominate an Aboriginal elder to work alongside the national president, advising them on cultural issues, but also helping to drive the broader agenda. “It would send a very strong message back to the Aboriginal community that the Institute is actually very serious  about building a relationship, so it’s not just an asymmetrical power relationship between the saviour and the saved.”

A high-profile Indigenous culture award may be another means to an end. “Now that there’s an environmental award, that has had an enormous effect on the way we design, because it was a bit of carrot that was dangled. It’s got currency. If you’ve got an award, it gives focus to a particular issue. We might be invited to be part of a panel for a major public building award, then we can really advocate. Are these projects talking to Aboriginal culture?”

Carroll Go-Sam, a research fellow at the University of Queensland’s (UQ) School of Architecture, with experience in Aboriginal architecture, housing management, policy and design, is helping guide the next generation. She agrees with Kombumerri that appealing to young Indigenous adults as they are choosing university courses is too late. “You actually

have to have an outreach program to younger Indigenous students, so at UQ the Pathways program connects to primary schools, with bright Indigenous kids from years five to 10 coming in for the day, seeing what our students do here and increasing awareness of architecture as a potential career path.”

Grabbing folks’ attention earlier helps demystify the profession, Go-Sam adds, but there also needs to be strong industry support to keep them in the business post-university, with less than five percent of graduates in practice.

Part of that response includes architectural practices reaching out, offering placements to Indigenous kids who may not otherwise have strong family networks linking them to what is an extremely competitive industry.

“There needs to be a two-pronged approach,” Go-Sam says,“not just focused on Indigenous students, but also a general dissemination of knowledge among the practice itself, because in terms of awareness and knowledge of Indigenous culture, and this is certainly cropping up in major building commissions, many practices don’t really have the cultural competency to deal with the Indigenous context in a sensitive way. It really depends on which part of country you are working in.”

Australia can only benefit from a more informed industry embracing First Nations culture, Go-Sam argues. “Indigenous architecture plays a huge role in projecting Australia’s identity and diversity, and a core component of that is how Indigenous and non-Indigenous architects work together. This is not a monoculture, so we have to learn to develop cross-cultural competency.”