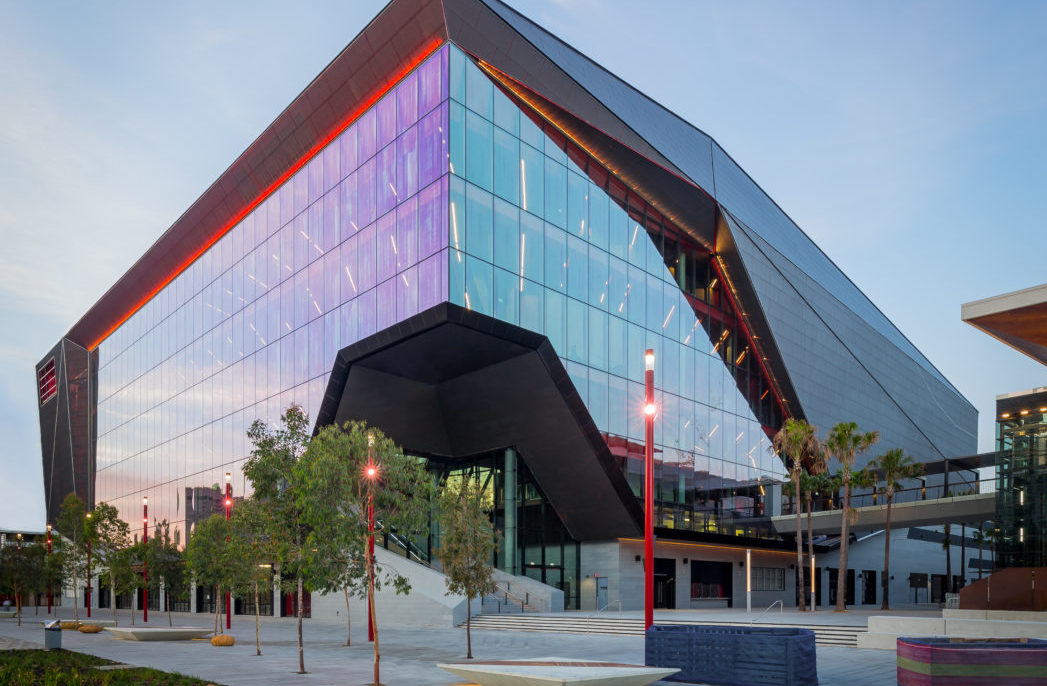 Above: The ICC Convention Centre. Photography by Guy Wilkinson Photography.

The precinct includes a convention facility capable of holding three separate concurrent events of up to 2,500 delegates, a total exhibition capacity of 35,000 square metres, a flexible entertainment theatre with a seated capacity of 8,000, an external event deck of 5,000 square metres featuring spectacular city views, a ballroom with banqueting space for up to 2,000 or 3,500 in cocktail mode, and 8,000 square metres of total meeting room space across 70 rooms.

Spread over 250,000 square metres in the heart of Sydney, the convention, exhibition and entertainment venue is divided between three structures – the ICC Convention Centre, the ICC Exhibition Space and the ICC Theatre.

Each space features a different façade and takes on its own character and identity. “Each is informed by its immediate location and context,” says HASSELL Principal and Joint Architect Director Glenn Scott. “ICC (Convention Centre) is reflective of its Harbour location, using reflective surfaces, folded façade and cool grey-blue colour hues; ICC Exhibition is reflective of its parkland setting using warm tones with greens and the extensive use of timber to soften its appearance; ICC Theatre is vibrant and more gutsy, reflecting its entertainment use and urban location with its striking mesh façade and strong reds, the red being a traditional colour used in theatres such in curtains and carpets.

“This is my favourite element of the design – how we managed to achieve three distinct and authentic identities for the three key buildings to provide architectural diversity within the precinct,” he says.

“Each building connects with its immediate context physically and visually, taking in the differing views, to ensure that it is not only an internal experience but one that embraces the uniqueness of its Sydney environment.”

Populous Senior Principal and Joint Architecture Director Richard Breslin says the team was inspired by the natural beauty of the Sydney context and the desire to challenge traditional design for convention and exhibition buildings and to capitalise on ICC Sydney’s unique setting.

“Convention and exhibition buildings have a tendency to be introverted by their very nature, but we worked to ensure that the line between the outside and the inside was blurred – so visitors coming to any of the venues could engage with the natural and built beauty of this city,” he says.

“We tried to move all the circulation spaces to the outer edge of the buildings, along with some of the meeting rooms and function rooms.  This is most obvious in the ICC Exhibition building, where the concourses are located to the park side, as well as having meeting room ‘pods’ that look into the park. This works from both the inside and the outside. Those using the spaces can see out to the park and also stunning views across the precinct and into the city, while people outside see an activated building, not just steel, glass and concrete. The activation is coming from people and they are making the building come alive, creating the movement and interest.

“I love how responsive the structures are to their setting – they are not inwardly focused, but welcome the outdoors. They celebrate being in Sydney, in Tumbalong Park, sitting on the edge of the Harbour and the city. People within the three buildings have a fantastic connection to the outdoors and to the park. This was a very considered design response that was meant to capture the essence and the  culture of Sydney and of Australia,” he says.

The massive project was completed in just two and a half years, to an absolute budget, which presented quite the challenge, says Scott. Breslin, however, says the biggest challenge for him was trying to make all the buildings fit within the space whilst getting the type of urban outcome they wanted to achieve.

TICC Sydney opened last Sunday, and the public realm areas are now fully alive with families and kids swimming in the new water play area, says Scott. “We’ve managed to achieve really great outcomes at so many levels, from the families in the parklands having fun to the top end business events in the auditoria, but we have also provided the best in the world BOH support spaces.”

“Sometimes it isn’t simply about building a building, it is creating those memorable moments, opportunities for leveraging as many experiences as possible from a venue, as well as from its core use,” adds Breslin. “None of those kids playing outside know about conventions or exhibitions, but they sure love being within the precinct.”