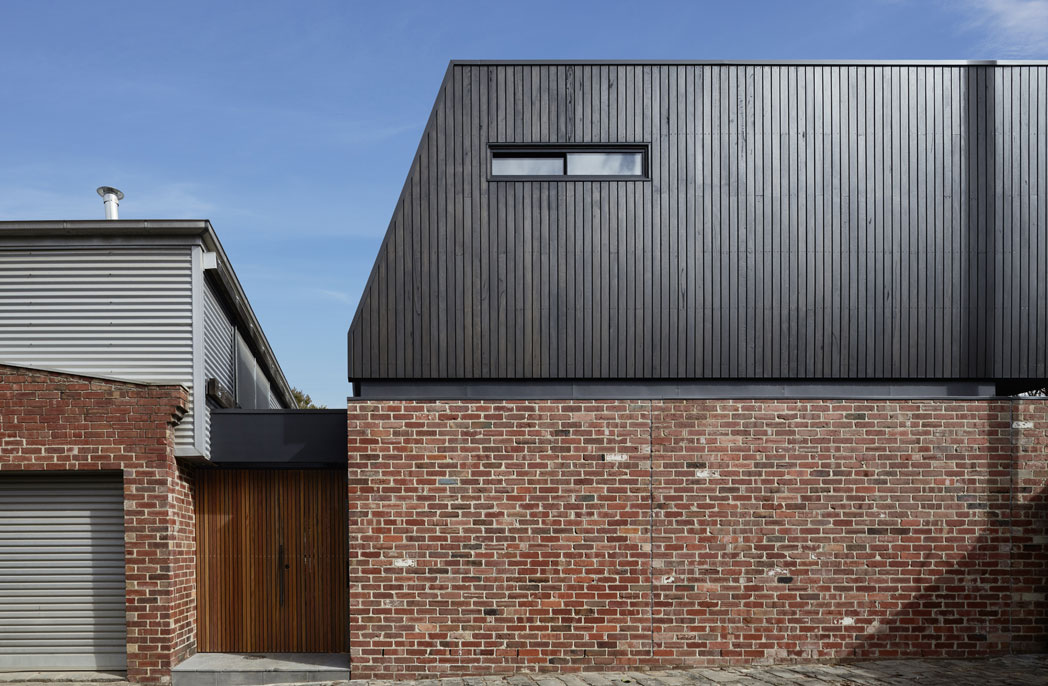 Garden wall house is a new three-bedroom home designed by Sarah Kahn Architect that has been inserted on a large block in Carlton North.

Surrounded by an existing garage and studio, as well as laneways and a double-storey Heritage terrace house, the new dwelling needed to carefully consider its placement.

The site where the new home slots-in had become overgrown and was too unruly for the owner to manage. In addition, it lacked a connection to the main house. The owner, therefore, wanted a simple, flexible home filled with natural light where she could live happily until old age.

This positioning on the site presented some challenges in that the new home had to allow direct entry via the laneway and maintain access to the studio and garage while allowing natural light.

The owner also wanted to ensure the new dwelling connected to the outdoors and retain part of the garden space.

“We approached the design by breaking up the site and creating a ‘patchwork’ of indoor and outdoor spaces, public and private zones, and small garden zones,” says Sarah Kahn, principal of Sarah Kahn Architect.

A new public entry was created to the south of the new house, which separates the new dwelling from the existing garage and studio, and the client from her workplace in the studio.

Another challenge came from the Heritage overlay. This was achieved by salvaging materials from the site, such as bricks and bluestone pavers. It was critical that the new home sit sympathetically into the surroundings, including its materiality and context.

A distinct feature of the new house is a recycled red brick wall, which extends out from the edge of the home into the garden. This wall both adds character while demarcating the home in the laneway and enclosing the garden space.

Natural light was a key feature of the client’s brief for this project and it has been achieved by locating the main spaces along the north face of the dwelling. Shielding this area from the harsh summer sun, a timber shade pergola has been positioned along the façade line, which frames the openings. In addition, the main bedroom on the ground floor also opens to the north and directly accesses the garden.

A large pivot door separates the main bedroom from the living space and can be left open – effectively joining the spaces and allowing for a full run of continuous glazing to the north.

Considering how light is brought into the existing studio, the form of the upper floor is raked to the south ensuring that sunlight can filter through.

Check out these three townhouses which make the most of a tight site – Balmain townhouses by Shed Architects with Terence Yong.

Russian home blurs boundary between nature and the built environment