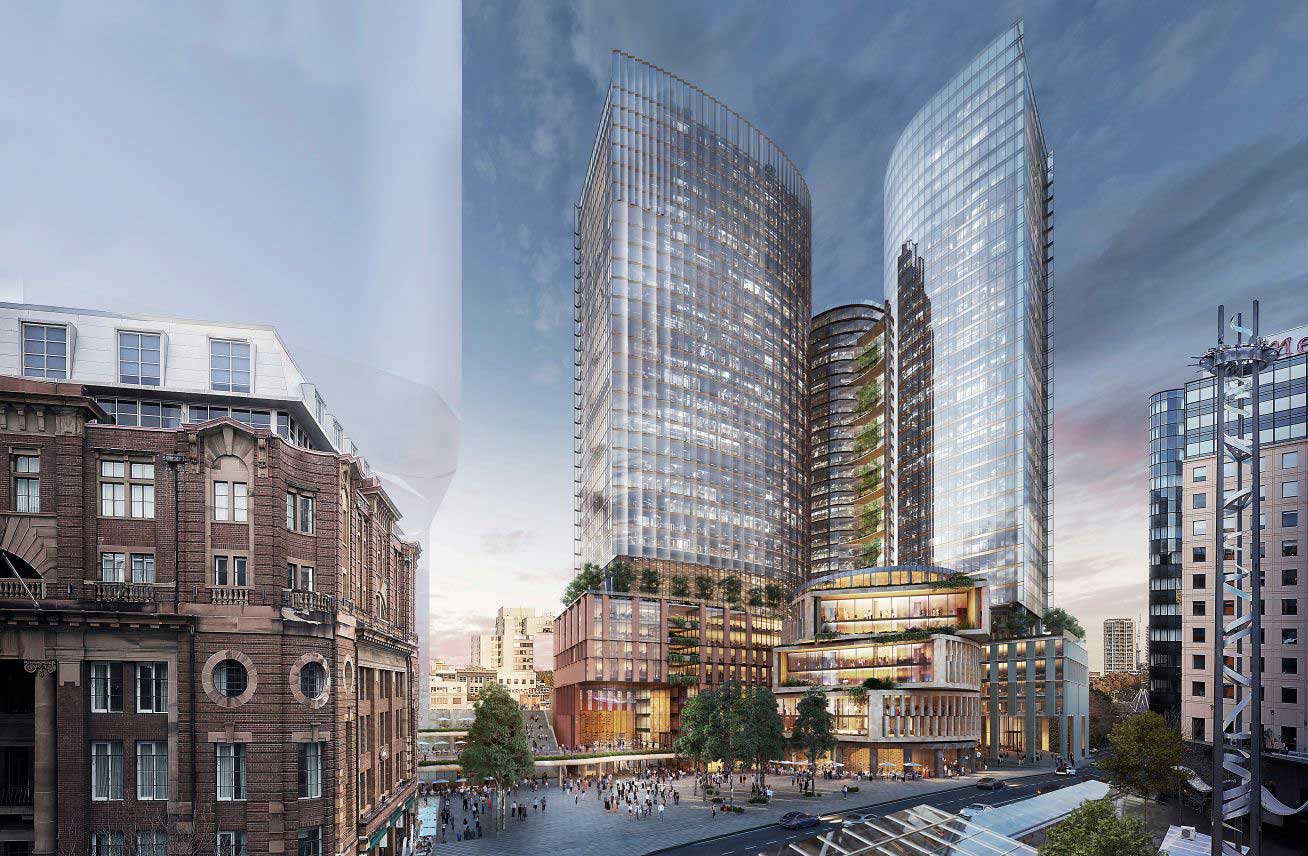 The Australian design practice teamed up with the Chicago-based firm to participate in the City of Sydney’s international design competition, the first of its kind to be run entirely online.

Located in the city’s so-called “Silicon Valley” spanning 24 hectares at the southern end of the CBD, Central Place Sydney is being slated as “one of the most contemporary and sustainable workplaces” in the world.

The winning design features two commercial towers, one 37 levels, the other 39, housing 150,000 square metres of office and retail space.

The towers, expressed as three curved sandstone forms, are meant to be “read as a family”, with each expressing an individual character in height, scale, articulation and materiality.

The buildings’ podiums will be clearly distinguished from the towers above, forming waistlines that reflect the adjacent heritage context of Henry Deane Plaza.

“The sculptural towers are shaped by the movement and civic connections at ground level and extend vertically into a ‘fine-grained’ skyline, orientated to address key vistas in a gateway configuration,” he says.

The towers are set to run on 100 per cent renewable energy and are designed to “optimise their environmental footprints”, mitigate wind effects and harvest natural daylight.

The “highly permeable” ground floor will offer retail and dining that flows out into the plaza, while the upper commercial levels are linked to the new towers to create campus-style floorplates.

Each floor is set to have its own unique neighbourhood connected by winter gardens, mixed-mode environments, light-filled atria or external terraces.

A computer-controlled double skin facade will mitigate direct sunlight and minimise heat gain throughout the spaces.

Touchless entry points have also been designed to respond to post-COVID-19 health and wellness concerns.

The rezoning of the area set aside as part of Sydney’s new tech hub was one of 13 projects and planning proposals the NSW government announced it would fast-track last month.

Central Sydney Place, which is being delivered by Dexus and Singaporean Frasers Property, will sit adjacent to Atlassian’s new $1 billion timber building.

Founded in the 1990s in Melbourne, Fender Katsalidis now has additional studios in Sydney and Brisbane. It’s recently behind a $20 million barrel vault winery in Victoria’s Yarra Valley and an “ultra high-end” aged care with new Melbourne precinct.