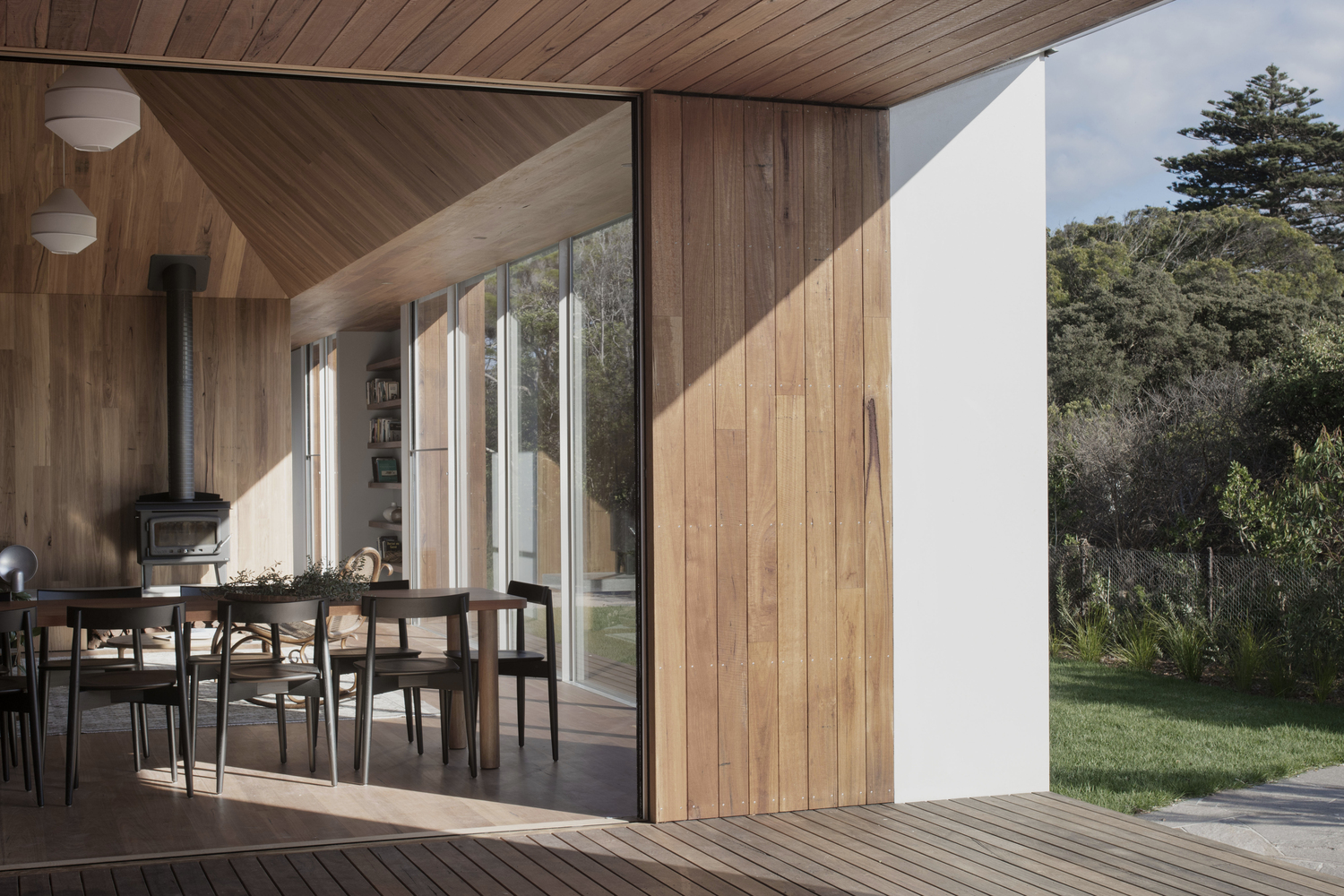 With Point Lonsdale house, Edition Office stays true to its path-breaking form, reimagining the beachside shack as a puzzle of moving parts that transforms spaces from cavernous to intimate in an instant.

Point Lonsdale, a coastal township near Queenscliff on Victoria’s Bellarine Peninsula, is known for its weathered terrain, its 100-year-old Norfolk pines and for being the destination of escaped convict William Buckley in the early 1800s. The picture of seaside tranquility, Point Lonsdale has long been a favourite for holidaymakers.

So when the members of a multigenerational family wanted to update an existing property, they reached out to Melbourne practice Edition Office.

“They had a holiday house they had acquired some time ago and decided they needed a change. Point Lonsdale was their way to come together to totally unwind. There was a heritage or history to having their whole family on the site. And that’s something we really wanted to respond to,” says Edition Office principal Kim Bridgland.

“The previous house was quite old, a mid-century bungalow, but it gave them that carefree attitude, that way of fully switching off, unwinding, that you can do within an older beach shack. We wanted to design a new building that gave them the licence to do that. So we created a series of layers or acts of theatre in architecture that possessed the same informality.”

The property’s owners, Jacky and Richard, wanted a home that would welcome their children and grandchildren, but also be adaptable to those weekends and winter days when it was just the two of them.

To do this, Edition Office approached the new structure as a ‘built tent’, designing four interlinked pavilions that seamlessly integrate into the landscape, while also allowing for passive heating, cooling and ventilation.

Separated based on functionality, each of the spaces is an expression of its purpose and a niche for the various generations of the family, with movable walls that effectively expand and contract the home as needed.

At its heart is the central living room with its monumental four-metre wide timber pivot wall that rotates to join the room with the north-facing eastern outdoor terrace.

Smaller openable walls on the western edge lead onto the south-facing terrace and a steel-framed sliding glass door links the patio to an informal lounge space.

“You don’t feel the scale of these spaces through the pavilion design. You feel something more intimate. The house can close down to something much more attuned to two people living in their own house,” says fellow principal Aaron Roberts.

“Then when the space is opened up, there’s this sense of everyone being pulled together. [There’s] a more intimate coming together and sitting around the same table and enjoying that kind of cabin holiday, but with the opportunity to also get away from one another.”

The pair designed Point Lonsdale house with a coastal aesthetic in mind, not from the typical council requirement point of view, but rather as a study in reinterpreting the Australian beach shack vernacular.

“We’re really interested in having a materiality that is somewhat universal, and that’s difficult on a project that’s timber framed,” says Roberts.

“We wanted the custom orb Zincalume roof to become of that material uniformity. So over time, the timber around the building will grey up and start to align itself with the dulling of the roof materials. At some point, they’ll unify and become of one another.”

Each pavilion is clad identically in sustainably sourced and FSC (Forest Stewardship Council) certified rough sawn silvertop ash cladding. The expressed vaulted ceiling form heightens the sense of space, while challenging the concept of the traditional beach home. The grey painted steel windows and awnings are an interesting contrast, their steel blades and precise aperture a note of difference to the organic spirit of the wood.

Inside, the informality of material choice is continued with mantles, benchtops and accents cast in concrete. The timber floors and ceilings are kiln-dried blackbutt.

The walls of the central living space feature the same blackbutt timber lining boards, while the hallways and sleeping spaces use grey painted plasterboard.

The old cane lounge set, the dining table (custom designed by Edition Office and made from Tasmanian blackwood) and minimal black furnishing are infused with the same textural warmth, bringing even more depth to the space.

“That’s something you see in a lot of our projects, where we like to celebrate the roughness and the handmade, the not quite perfect materiality,” says Roberts.

Part of this is projecting a site within the context of its landscape rather than in isolation. Point Lonsdale house is designed to be gradually encroached upon by its garden.

It’s what Edition Office calls a ‘living edge’ and it starts with the deep-niched windows that line the northern façade of the long and narrow site, sinking you into a garden of native Australiana.

Like so many Edition Office homes, Point Lonsdale is design distilled, refined to be a re-articulation of how you experience a space and what you draw from it.

“The owners are people who live within a context. We try not to forget that our clients have a lot of human qualities, qualities that make our society and the way we live in a country like Australia, or whatever the context it is, incredibly fascinating. Our job is teasing out those things to make a house a home. That’s the joy for us,” says Bridgland.

“There’s always a risk with architecture, if you design a house, to neatly resolve all the loose ends. We like to see the handiwork in our projects. To allow the building to have the right amount of intricacies, so you can live it in. People need to feel like they can populate the space and that it’s not so precious, you can’t dent it.”

Point Lonsdale House was featured on the cover of inside (on newsstands now). We also spoke to Edition Office directors, Kim Bridgland and Aaron Roberts, about the need to stop “designing for design’s sake” in the latest print edition.

The Melbourne practice was founded by the pair more than a decade ago, becoming household names after designing the 2019 NGV Architectural Commission, In Absence, with contemporary artist and Kokatha and Nukunu woman Yhonnie Scarce.