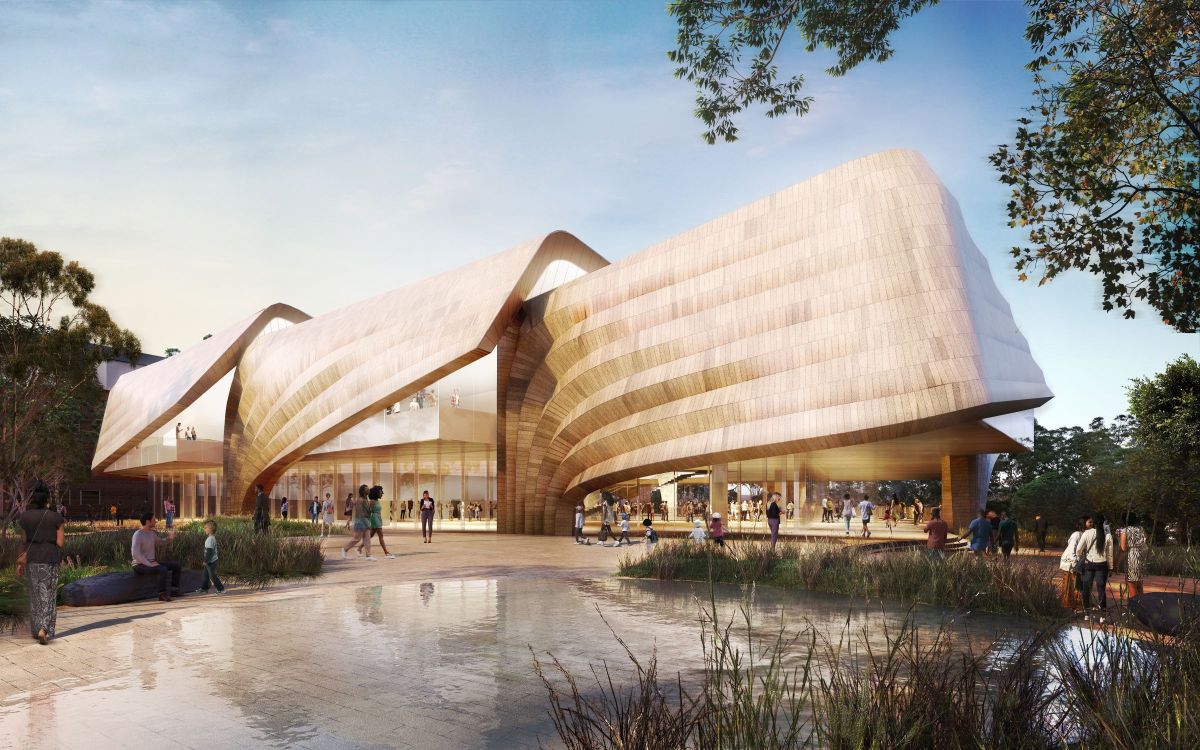 Diller Scofidio + Renfro and Woods Bagot have unveiled updated designs for the Aboriginal Art and Cultures Centre, which is now seeking planning approval in Adelaide.

The evolved design is being described by Diller Scofidio + Renfro as a “new paradigm in cultural space design”.

Developed together with an Aboriginal Reference Group, the centre rests on a glass base and slanted columns.

In the updated concept design, released last week, the building’s crafted metal skin facade is largely unchanged, but its connection to the surrounding landscape has been strengthened.

“Wholly connected to the landscape, the design embeds the lower ground level into the site and includes an outdoor gallery cantilevered over the terraced landscape.”

Located to the north of the site, this gallery has been redesigned to create “a stronger connection to Country” with structural columns that appear to “grow from out of the ground.”

Around it, a series of interconnected pathways wind around the building and flow into “smaller, quiet spaces” featuring a combination of plants, seating and water features.

Designed to encourage visitors to “immerse themselves into the landscape”, these spaces better connect the building to the Kainka Wirra (Adelaide Botanic Garden).

While internal renders are yet to be released, the centre, which will host a mix of exhibition and event spaces that celebrate the “past, present and future” of our First Nations, is set to be divided across multiple floors.

On the upper level galleries, generous views of the sky and surroundings depict “truth-telling and transparency”, while on the ground floor, a porous indoor-outdoor space further draws the garden landscape “deep into” the building.

Between the two, a flexible, three-story gathering and performance space “spirals around” visitors as they make their way to the different levels.

The $200 million Aboriginal Art and Cultures Centre is planned to start construction later this year, with its opening scheduled for early 2025.

Founded in Adelaide 151 year ago, Woods Bagot is a global practice with 17 studios in major cities around the world. Diller Scofidio + Renfro is an interdisciplinary design studio with a focus on cultural and civic projects.