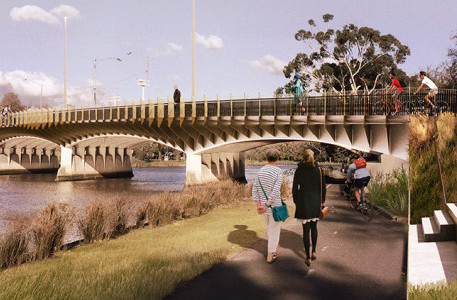 BKK Architects has been chosen to redesign the Swan Street Bridge in Richmond, Melbourne.

The Labor Government recently announced $30 million to upgrade the bridge, which will include an additional traffic lane and new separated shared paths for cyclists and pedestrians on both sides.

BKK’s design draws inspiration from landmarks including the Arts Centre and the rowers who make their way up and down the Yarra River each morning.

“This design will give Swan Street Bridge a modern makeover without losing its existing charm,” says Minister for Roads and Road Safety Luke Donnellan. “We’ve heard from the community about how they want the bridge to look and feel and we’re now getting on with creating a world class bridge for a world class city.”

Earlier this year, BKK and three other architectural and urban design firms – Sally Draper Architects, John Wardle Architecture and Watson Architecture & Design – submitted their vision for the future of the bridge.

The community was also asked to help shape the future of the bridge. The feedback highlighted the important role the bridge continues to play in Melbourne’s sporting and cultural way of life and the need to address traffic congestion and improve safety for cyclists and pedestrians crossing the bridge, which the new design addresses.

BMD, Cut & Fill and Seymour Whyte have been shortlisted to submit tenders for the upgrade, with the contract due to be awarded by the end of 2016. Construction on the bridge will begin in mid 2017.