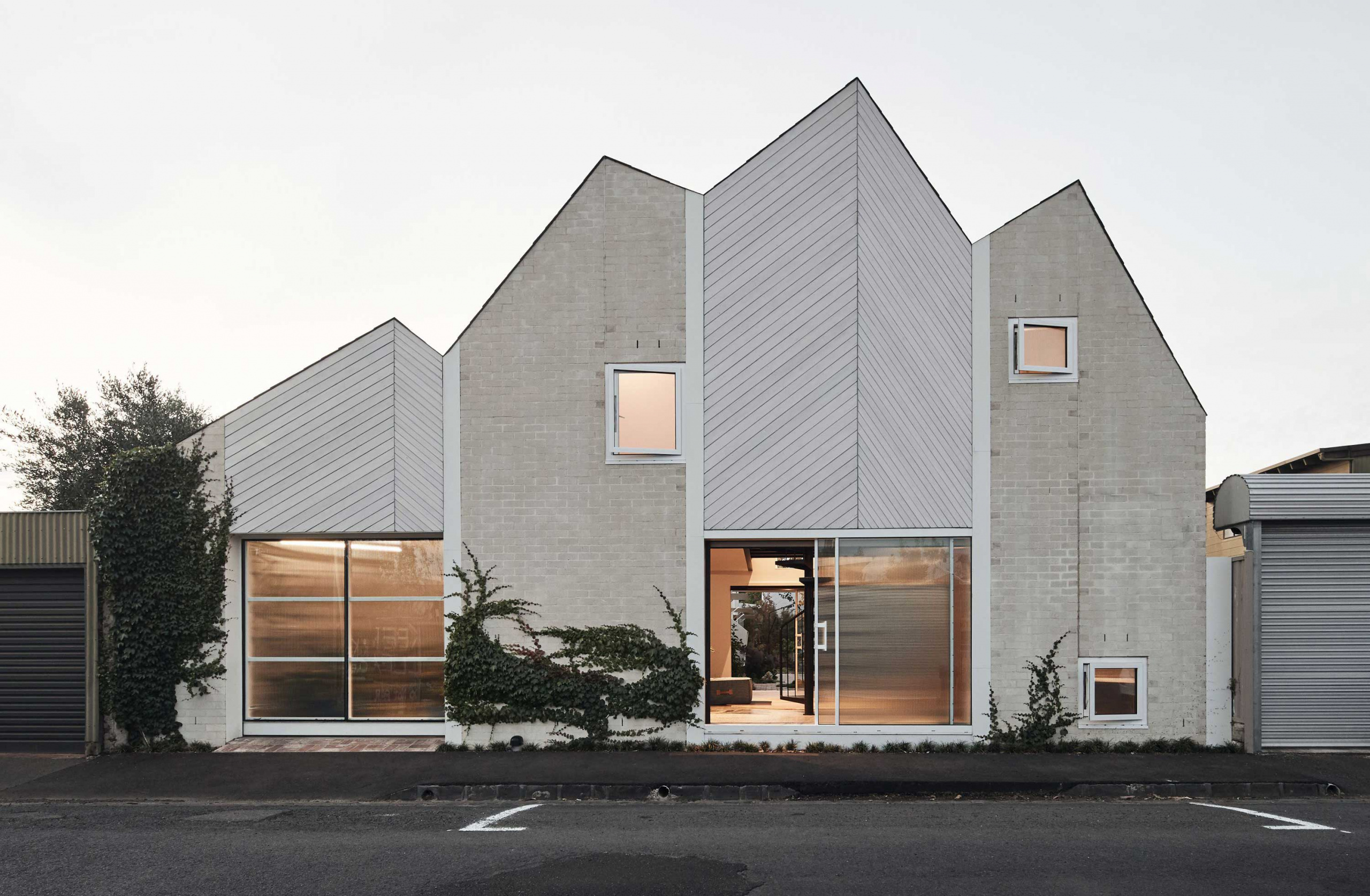 RaeRae house’s owners Fiona and Tim were originally intending to renovate and extend their single-fronted terrace when the neighbouring house became available for purchase.

Situated on long blocks with dual frontage potential, a street at the front and an unusually wide lane at the rear, the two terraces immediately create an increased footprint and fuelled the creative process.

But a Heritage overlay dictated that the street frontages of both Victorian pre-existing façades were to remain – a design challenge.

The owners serendipitously chose Austin Maynard Architects (AMA), saying: “At the time we were looking for an architect, we saw its Tower house in the newspaper. It looked very creative. We were hoping to work with someone local and AMA was just a few blocks away. We needed an architect willing to take on a challenge. Once we met Andrew Maynard and Mark Austin we knew they would be a great fit.”

The neighbouring house was dilapidated and needed a lot of work, but it provided AMA with the opportunity to create something that would cater to the family of five.

A new glazed entry, set back and between the two refreshed Heritage buildings, forms a discreet yet transformational gateway to the now united residence. The 1930s steel-framed windows and flanking original doors were retained, adding to the house’s elegant façade.

To the right of the entry, the front room of one terrace is now a self-contained guest suite, including separate street entrance. The terrace to the left is now a home office and beyond is a discreet garden shed, which leads through to the newly created central garden that occupies the northern boundary.

The entry leads from the front garden through to the sun-filled north facing living spaces including lounge, kitchen and dining room. The aspect’s effect is one of immediate light, warmth and space. For the owners “the interaction between the internal spaces and the huge (for the inner city) garden is terrific. Glass doors and windows allow so much light in and have different green outlooks”.

Above the kitchen, the main bedroom with walk-in robe and en suite has a skylight for maximum natural light. The location indicates a reflection of a family lifestyle integrated into the design with the opportunity to directly engage with the activity below, or close off large sliding doors to create privacy.

The concepts of privacy versus connectedness recur throughout the home; spaces can be secluded or opened, the residents can be engaged or alone.

With interior styling and furnishings by Augie Interiors, the dining room has a long wooden table for entertaining, coupled with yellow Thonet chairs and custom-timber storage cupboards adding warmth and depth.

Beyond the dining room the two-storey area has three bedrooms and a bathroom accessed via a custom black spiral staircase, which adds a sculptural element to the white interior volume.

A perforated steel landing connects the bedrooms and bridges a double-height void. Below is a rumpus room, study/craft area and a multifunctional utility or garage space. The rumpus room opens to the garden rear lane, future-proofed to become self-contained.

The owners note, “The children love the fun of their area; the study has a lot of space and a great playroom, and they all have their own individual areas with sliding bedroom doors. All have different coloured carpets (cadmium green, delft blue and dark carmine) in their rooms, which they chose.”

The standout design feature is the contextual roof form, which sits low against adjoining neighbours’ gardens, and high against buildings lining the boundary to minimise overshadowing and visual weight.

Mark Austin explains: “The mountain-scape roof means some internal spaces have triangular pitched ceilings, others are flattened. This was a big decision for the owners. The spatially adventurous nature of the architecture creates volume and a sense of discovery internally; however, it is considered. The roof is a response to site and sun; the pitched mountainous form allows maximum sun exposure and intriguing spatial arrangements externally and internally, but it is also less impactful for the neighbours.”

Spanish Del Carmen slate was chosen, which over time will naturally age and weather.

Materiality and surface textures are a constant – from the interior salt and pepper finish of concrete flooring, via the warmth of the spotted gum timber and exposed brick walls to the exterior slate roof atop ivory-coloured brick and Silvertop ash timber lining. There is minimal structural steel. The overall effect is airy and ethereal as the house envelops itself in a tonal palette of neutrals to create calm.

“In terms of sustainability, the polished concrete floor lies atop internal hydraulic heating to create a thermal mass, the windows are double-glazed and the external envelope is exemplary. An underground tank lies beneath the garden. With the exception of one benchtop, we worked with local suppliers and Australian-made materials,” adds Austin.

Situating the primary residence along the southern boundary to take advantage of the northern aspect maxmises solar gain, ensuring minimal shadow lines. With active management of shade and passive ventilation, despite the strong surface presence of glass and concrete, demands on mechanical heating and cooling are drastically reduced.

With detailed design resolution at its core, RaeRae house with all its tactile, playful and clever features, is an inner city forever home able to sustain the rigours of life and a family’s ever-evolving needs.

Founded in 2002 by Andrew Maynard, Austin Maynard Architects is an architecture practice based in Fitzroy, Victoria. The practice was shortlisted for last year’s World Architecture Festival

This Austin Maynard Architects feature originally appeared in inside magazine – on newsstands now!