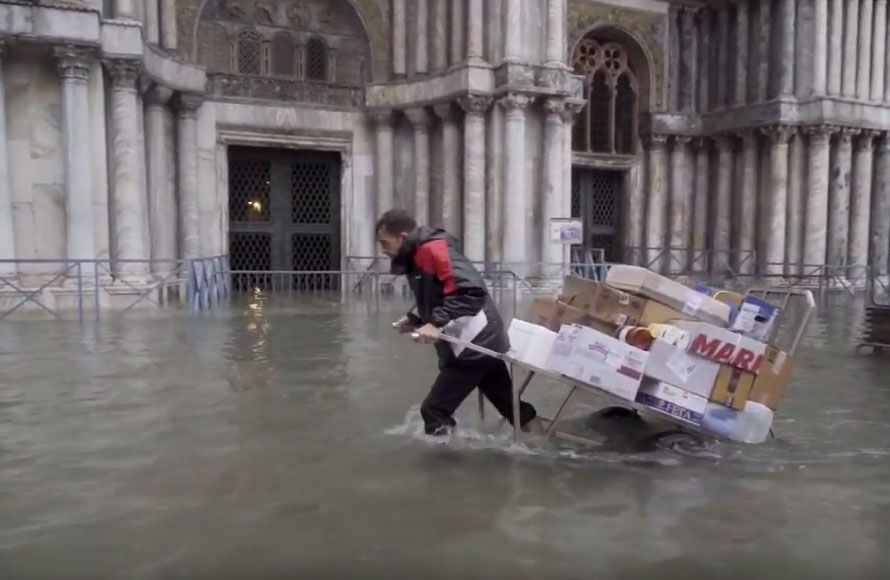 Architectural filmmakers Ila Bêka and Louise Lemoine have captured the devastation of the recent in flooding in Venice in a trailer for their latest movie.

The pair behind Koolhaas Houselife and Moriyama-San captured tourists and locals trudging through knee-deep water in plastic boots known locally as “copriscarpe”.

Last week, the Italian city experienced its worst flood since 1966. Water levels rose to 1.87 metres, leaving most of the city and its numerous World Heritage buildings submerged.

Other landmarks like the Peggy Guggenheim Collection and Ca’ Giustinian, which was hosting the Venice Art Biennale at the time, were also affected.

Curators assured visitors none of the works on show at either were damaged.

The same cannot be said for St Mark’s Basilica. The 925-year-old church has been severely damaged by the event. It’s the second time the architectural icon has flooded in the last two years, but reports say this time could be the worst.

Bêka and Lemoine captured the Venice floods as part of their ongoing series, Homo Urbanus, which explores the daily life of cities around the world. The series has already featured Bogota, Seoul, Tokyo, Kyoto, Rabat, Naples, Shanghai, Doha and Saint Petersburg.

In the Venice trailer, locals are seen navigating the flooded streets, pushing carts loaded with deliveries and enjoying a beer in ankle-deep water. We also catch a glimpse of former Italian prime minister Silvio Berlusconi as he tours St Mark’s Square surrounded by journalists and police protection.

The recent floods are significantly worse than the “acqua alta” the city is used to. They are thought to have been caused by high tides and a strong, low-pressure storm system in the north Adriatic Sea that pummelled most of northern Italy.

Estimates placed 85 percent of Venice underwater in the days after the floods, causing roughly 1 billion euros ($1.6 billion) worth of damage.

A major infrastructure project has been in the works since 2003 to protect the city from flooding. If everything had gone according to plan, MOSE, as the project is called, would have prevented the high tide from reaching the lagoon city, let alone flooding its basilica, squares and historic palaces.

MOSE stands for “Modulo Sperimentale Elettromeccanico” or “Experimental Electromechanical Module” and consists of 78 mobile barriers submerged in the water that should rise above the surface and prevent surging tides.

They were commissioned following the 1966 floods, but the project has been plagued by corruption, cost overruns and prolonged delays.

Engineers are now predicting the system will go on line at the end of 2021 at a cost of 5.5 billion euros ($8.9 billion) instead of an original estimate of 1.6 billion euros.

The country has since declared a state of emergency with the government pledging 20 million euros ($32.5 million) towards repairs. The mayor has also opened a bank account to receive charity donations.

Bêka and Lemoine’s Homo Urbanus series with be on show in Shenzhen at the Bi-City Biennale of Urbanism/Architecture later this year.