Home • Architecture • A house of light 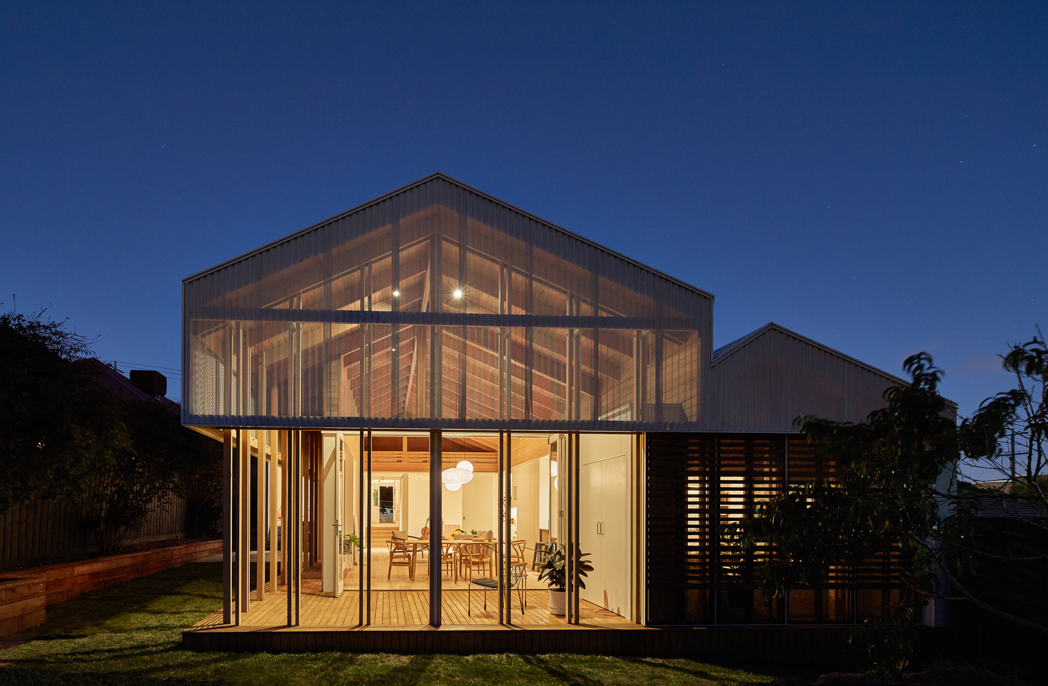 A house of light

The Amado house was designed by multi award-winning Melbourne firm Make Architecture for a culturally blended family returning to Australia after many years living in Japan. Given that the clients are half Japanese, half Australian, part of the brief was to find an architectural language that reflected and celebrated these cultural differences.

Located close to the CBD in Melbourne’s north-west, Essendon has transformed dramatically over the past 20 years into a gentrified suburb, but with a wide range of house styles and building types. 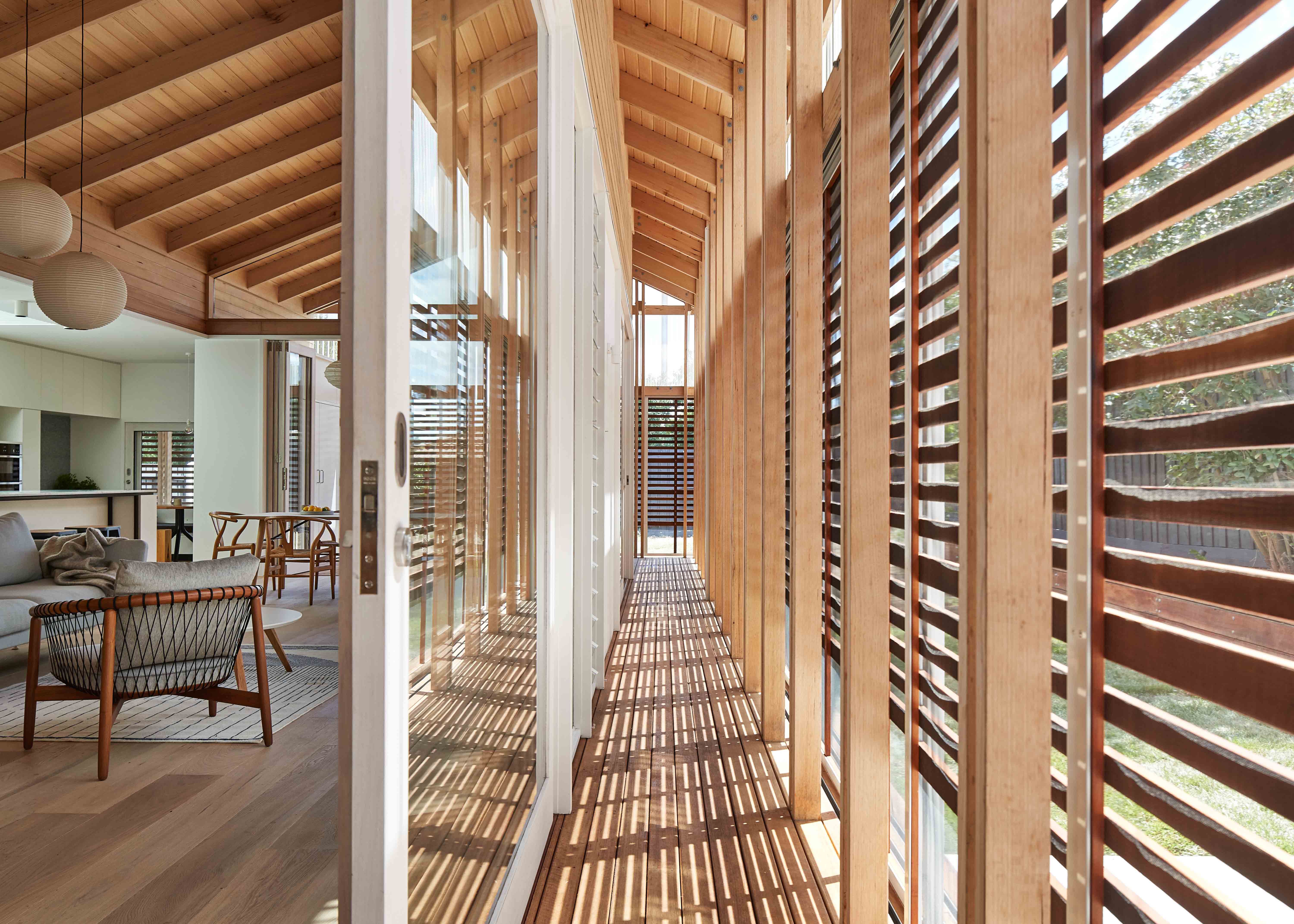 Originally belonging to the client’s grandmother, the house had significant sentimental appeal. The existing dwelling was a timber-framed, weatherboard-clad and tin-roofed Victorian home with some charming interior fretwork, pressed metal detailing, and a hipped and gable articulated roof form typical of the period.

The aim was to integrate the history and character of the original building with an addition that was spacious, light and adaptable to the lifestyle of this family. Remarkably, the Amado house was designed and built in 14 months, an impressive feat, in part due to the fact that there were no town planning permits necessary, and no Heritage overlay.

One of the key driving ideas for the design was to create a space that both embraced the site but was also a buffer from the harsher elements of living in suburban Melbourne. The junction between the old and the new is quite intentionally distinct with the geometry and scale of the new pavilion creating a clear visual break from the existing house. It has also been cleverly offset towards one side boundary to allow the sun and garden to penetrate the internal spaces. 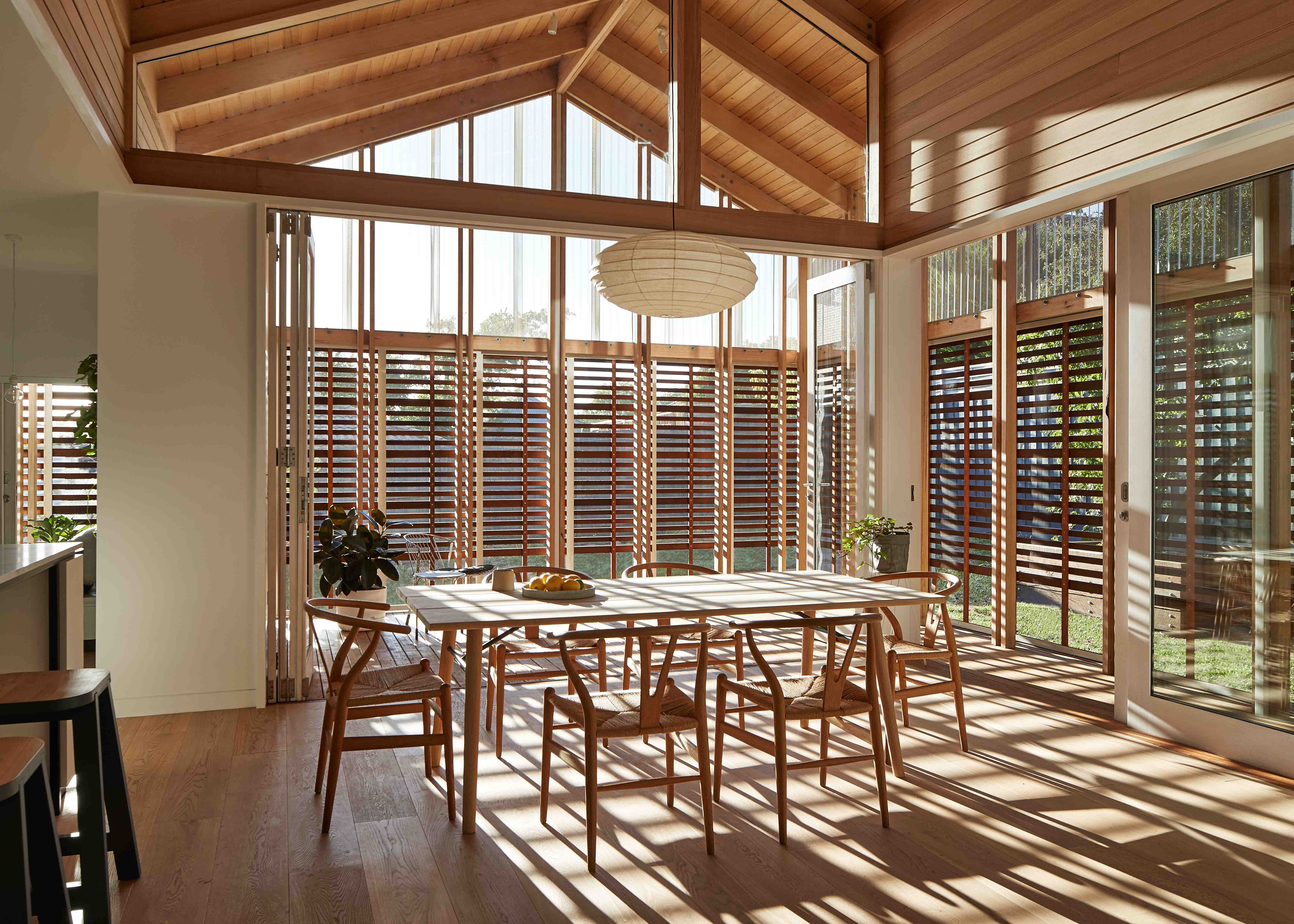 The brief was to refurbish the existing house and build on a generous backyard pavilion, which incorporated a large open living space, kitchen and study, and to refurbish the existing bathroom to include a deep Japanese sitting bath (furo) and an adjoining space for soapy washing and rinsing. The brief also included the creation of a new Japanese style entry to the existing building to incorporate the traditional ritual of genkan or shoe removal, including a step up to the timber floor.

Amado is a Japanese word for sliding screens, which have been traditionally used in traditional Japanese houses to protect the internal shoji screens – made from delicate rice paper – from the weather. Make Architecture has substituted the traditional rice paper for the ubiquitous flywire as a pragmatic solution to the insects and climatic challenges of the Australian environment. In this spacious and airy pavilion, the sliding amado screens form the outer skin of the building, providing a transition space that blurs the definition of interior and exterior. It also offers options for either sitting in or strolling around the perimeter. The space brings great flexibility in the variety of ways that opening glass and opening screens can work together to adapt to the unfolding weather that is a key feature of living in Melbourne. 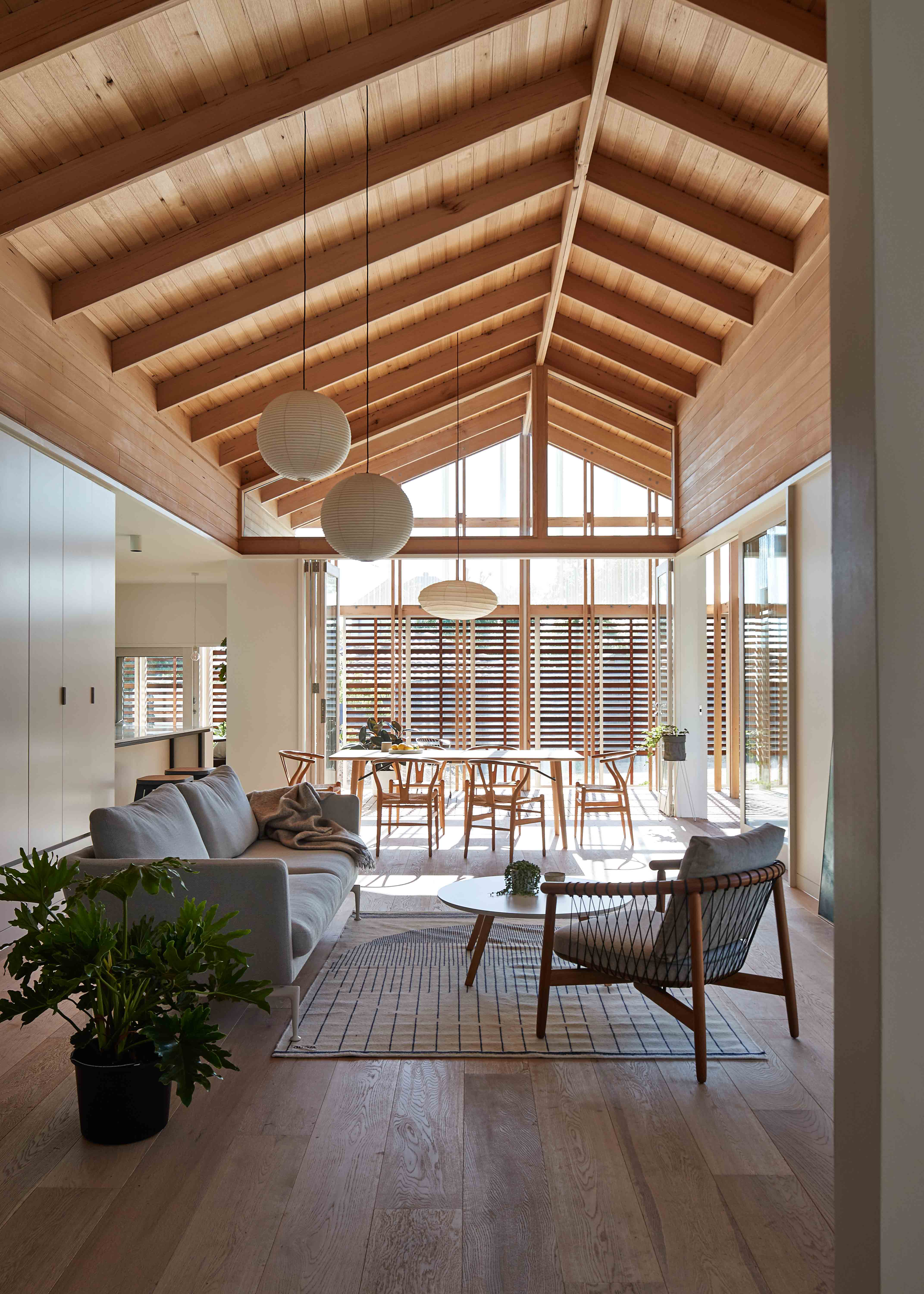 Another of the key elements of this project is the way Make Architecture has integrated the idea of the traditional engawa – a verandah or a wooden strip of flooring immediately before windows and storm shutters inside traditional Japanese rooms. In the Amado house, the engawa is a main feature of the design, functioning both as a verandah that wraps around the perimeter of the pavilion, but also including an outdoor area that sits within the building envelope while being open to the elements.

The innovative use of translucent roof sheeting wraps around the perimeter of the exterior, creating a gentle, mediated quality of light within the pavilion. During the daytime, this material, in addition to the perforated cladding, creates the illusion of an external solid mass and an internal translucency. This structural duality elegantly reverses itself at night-time. The overall feeling is one of a softened light source. This is atypical for the Australian obsession with maximising north light, which can often feel quite harsh and intense. 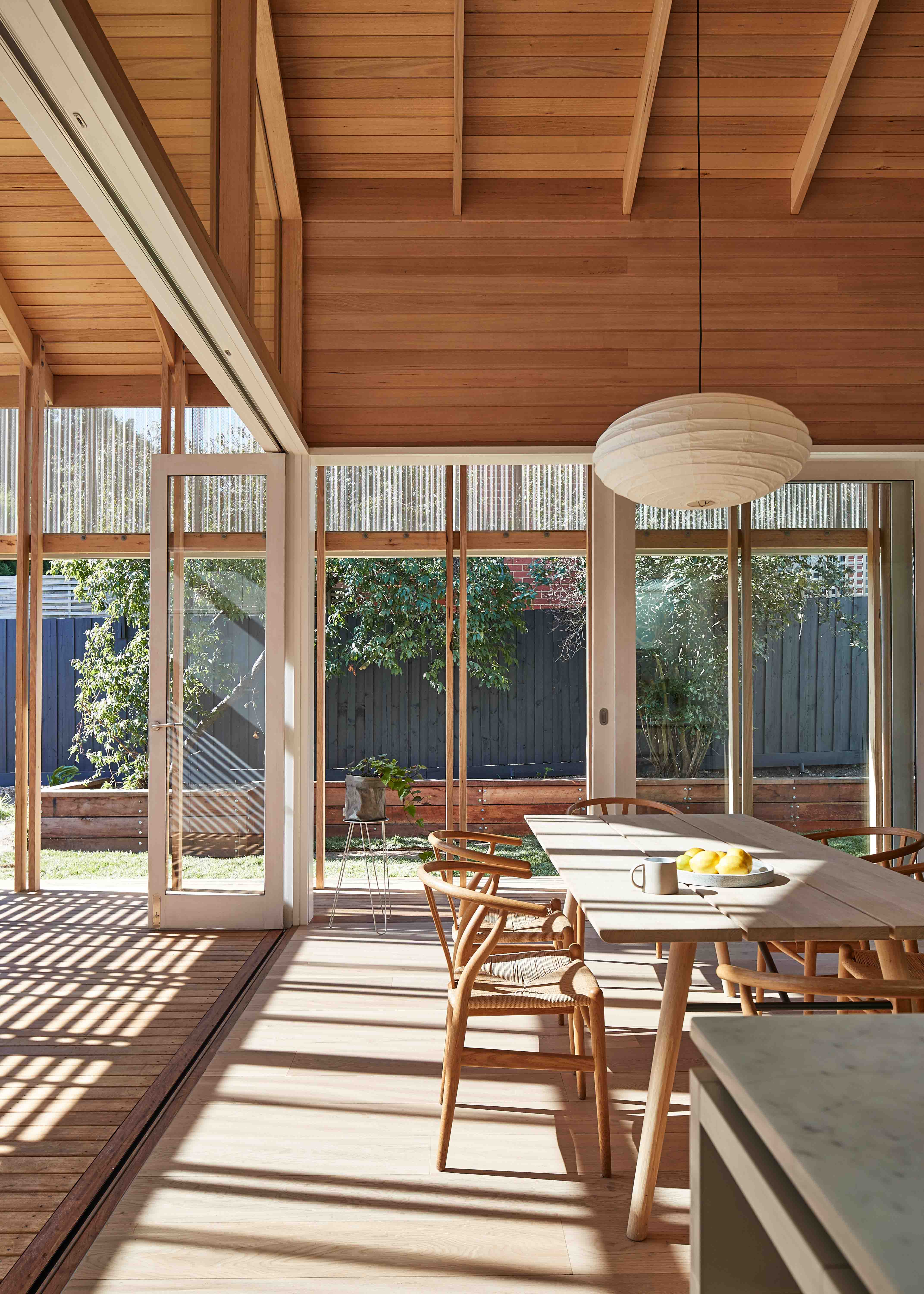 The building has been designed to the highest standards in sustainable materials and with the inherent flexibility of the screens and verandahs. It also has a natural ventilation system that can be adjusted to all climates.

The Amado house is a superb example of Make Architecture’s sensitive and considered integration of the clients’ personal and cultural values, yet also incorporating the equally important practical and financial considerations. Make has created an oasis of shelter and tranquillity, supporting the requirements for a space that is contemplative, private and flexible. The brief required spaces to sit quietly sipping tea and gazing into the garden, or entertaining, plus places to house and appreciate treasured objects. It could be argued that the integration of all of these features and details have helped to ease what could have been a difficult transition from life in Japan into Australia with its own unique cultural backdrop.