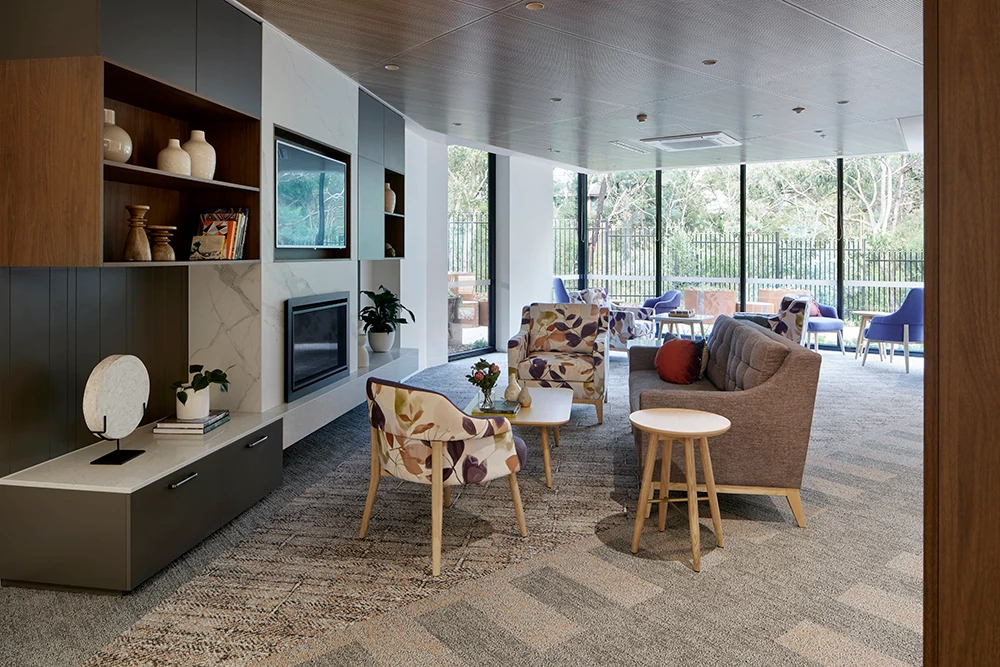 The Shaw Contract Design Awards winners for 2020 were announced this week with two Australian practices picking up prizes.

With nearly 500 entries from 29 countries, this year’s competition was judged by a global group of esteemed jurors, who, for the first time, met virtually to select the seven final winners.

Looking for the year’s most uniquely impactful designs globally, this jury judged not only each project’s design process, but also its holistic thinking and sustainability values.

From the 10 Australian finalists nominated for the 2020 Shaw Contract Design Awards, two were named final winners – the Japara ‘The Regent’, Aged Care Facility by Spowers in Melbourne and Eternal Women’s Health by Core Collective Architects in Hobart.

The winner of the People’s Choice Award was also announced this week and went to The Suave – Hannover RE by Box Design Studio Sdn Bhd in Kuala Lumpur, Malaysia.

Each final winner will receive a trophy. Their projects will also be featured in Shaw Contract global marketing materials, as well as a media campaign with international architect and design publications.

And to compound the social impact element of the awards program, each winning firm will also receive US$5000 to be donated to a charitable organisation of its choice, adding to the $150,000USD that the Shaw Contract Design Awards Program has already given to non-profit and charitable organisations around the world in its 14-year history.

Eternal Women’s Health is an innovative new practice providing multi-disciplinary healthcare for women at all stages of life.

Through a rigorous briefing and design process, Core Collective Architects designed a homely, crafted and functional tenancy fitout that enhances the philosophy of the healthcare practice and provides a nurturing, modern and comforting space for women.

The notion of community and neighbourhood informed the organisation of the various spaces in this new aged care facility from Spowers.

This translated into a wayfinding strategy that was familiar and intuitive providing a sense of safety and comfort for the residents through strategies such as the high street, where many of the social assets including the wellness centre, library, gym and theatre reside, to the smaller cul de sacs where residents rooms are positioned.

Infused with the adidas brand DNA through graphics, colours, materials, and shapes in every corner, this new global sourcing headquarters placed emphasis on the movement, connectivity and function between spaces, bringing a diverse and ever-changing spatial journey for the staffs and visitors.

The International Consulting Firm’s new Shenzhen office, set in a metropolis of youth, energy and innovation, is created with an equally strong sense of style and passion and is evocative of the city’s southern, tropical environment.

An enlarged spiral chandelier, evolved from the horn of the legendary unicorn, hovers over a long table as a key feature of the space.

This 1000-square-metre office space has a contemporary aesthetic and inviting atmosphere.

Flooring has played a crucial role, determining the shift between areas within the office space with layers of simple geometry, while blending a variety of materials from raw woods to marble coatings.

The design for this school is a response to the unique needs of the homeless students and families it serves. The space is designed to support social services as well as the school’s ‘High Structure – High Love’ curriculum.

Its design achieves a sense of home rather than an institutional setting and a campus where learning opportunities can happen anywhere.

The Shanghai Headquarters of Shui On Land is a story of “social renaissance” – a story about connecting life, thinking about communities and people and passing on Shui On culture from a new perspective.

At its heart is The Lighthouse, which not only connects the inner three-story movement lines, but is also the visual focus of every visitor and the “spiritual guide” of employees.

Spanning across 30,000 square-feet over two storeys, this modern office takes on a curvy and sleek interior that speaks of the suaveness and sophistication of the space.

Shades of blue are reflected with gradient transition, which brings out the dynamic statement of the corporate logo.

Read more about all the 2020 Shaw Contract Design Awards winners.