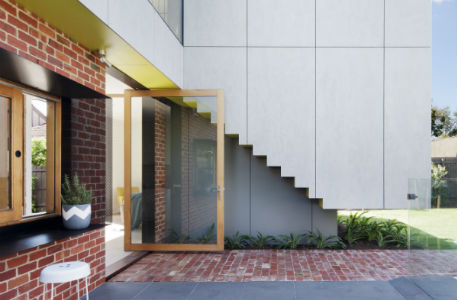 A cut above: Architects EAT

As an architectural practice, we are interested in the contrasting relationship of the outside and inside, and the hyper-reality that can be created when that relationship is expressed via a set of stairs. This exploration was the basis of our thinking for the Incision House, and became the visual and physical link between the existing dwelling and the new addition. Externally, the form of the stairs is expressed as a cantilevered extrusion, which is reflected internally through a thin blade of perforated steel that cuts into the central void to become a suspended walkway that provides access to the upstairs bedrooms.

The result of heavy engineering, pre-planning and craftsmanship, a single piece of perforated metal has been folded to create the stairs, which cantilever part-way into the cavity. This is achieved through a central stringer sitting on a load-bearing wall and a half-width stair in the same structural ply we used for the walls. The landing is held up by cantilevered steel beams that hang from the roof structure. To allow light to filter down into the kitchen below, the perforations are the result of a continuous exploration into the use of light and shadow – part of our practice’s design language.

Connecting the old to the new is a 6.5-metre high narrow void. It is the central visual spine and functions as the thoroughfare between spaces. Externally, this spine is expressed as a slice or an incision to a brick-based building – it provides sun, shade and privacy all at the same time. Using standard off-the-shelf, pre-assembled, operable skylights, it also allows stack ventilation throughout the house by letting hot air escape in the warmer months – a basic thermal chimney effect.

The result is a bright and airy space that combines the two levels, opening up the house to the northern aspect and creating a large visual gesture – an effect that can be hard to achieve in a domestic setting. The play of expectation through the compression and release of spaces is something we enjoy experimenting with in our work. With two active teenage boys, it was important to maintain the back garden to the east of the block, plus the existing house was dark with little access to northern light. The courtyard was the solution – bringing light into the centre of the living spaces while maintaining a large garden with a pool to the rear. The courtyard typology is tried and tested in many of Architect EAT’s previous houses. It acts as an answer to the typical deep plot plan, providing cross ventilation and daylight, as well as a layering of spaces, creating a sense of depth. The resulting plan is interconnected and layered; spaces overlap both indoors and outdoors, but are visually screened. They can be opened up or closed off with large sliding doors as required, avoiding the typical open-plan living, dining and kitchen scenario. The façades are the juxtaposition of two elements: bricks and cement sheets, both cost-effective. The bricks form the base of the ground floor of the house. They were salvaged from the demolition of the old house and each brick was lovingly cleaned by an apprentice on-site, then neatly stacked out of the way during construction awaiting reuse. The cement sheets are prefinished to minimise time and labour. They are also proprietary, which means all components are provided, allowing quick and easy installation. The modular nature of the cement sheets gives the impression of precision, which contrasts against the organic texture of the recycled bricks. The northern façade is also intentionally detailed to be half a metre thick. In terms of aesthetic, it creates shadow to openings, generating a three-dimensional effect. In practical terms, more than enough thermal insulation is packed into this thickness to protect the interior of the house from the northern sun. And, in functional terms, the thickness allowed us to create a pocket space for the large sliding glass door.