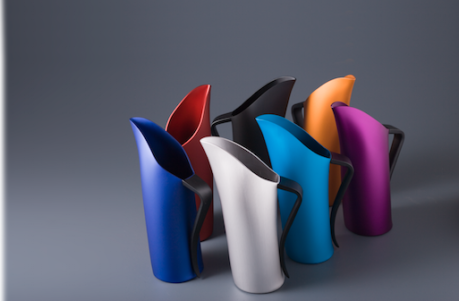 The FINK water jug is an achievement perhaps only made by mid-century Danes and very much the last thing you would expect to come out of the near-capital city of Queanbeyan but, hey, in 1993 Robert Foster made it happen!

This piece of Australian design exploded into our memories. Its vibrant colours and ridiculously fantastic form saw it hit the top of the shopping list for boardrooms, cafés and, yes, wedding registries.

So how did he make it? Myths abound, but the real story may remain speculation. Was it dynamite in a tube of aluminium? Was it cast? In the late 1990s, as Canberra became obsessed with the sport of mountain-biking and its increasingly anodised componentry, Foster’s vivid aluminium water jug became the touchstone of the process and Australian ingenuity. It was a process that led him to a prolific body of work, and a career built on exploring ideas.

Over two decades, the FINK water jug has been an emblem of Australian design, both locally and globally. It holds pride of place at New York’s MoMa Store, London’s V&A, every major gallery here in Australia and also the expertly curated Top3 by De- sign. It is symbolic of a name and a brand, and has inspired countless designers and curators, me included, on so many levels.

We are reminded of the power of design, and the investment designers make in pursuing an idea. Ultimately, we are reminded that design is also an everyday pursuit like any other profession.

Robert Foster had a moment all those years ago, or a culmination of moments, which resulted in an object that is known worldwide, and continues to sell more than 20 years after its conception. His partner and children have survived, and continue to survive, on those sales and the sales of his extensive product and lighting range – in the same way the families of all designers live on the rewards of their work. It is no different to how all families exist, though all too often with design, consumers will look for, and find, a cheaper option.

In speaking with the design community in the days after his passing, I have heard Foster described as a mentor (“a grandfather to Australian design”) an incredible father and “a Foster by both name and nature”. With this in mind, perhaps his legacy is to remind us that as designers we can do any- thing, and as consumers we should support those among us, like Foster, who have the determination and commitment to do so.

Thank you Robert, you have inspired so many in so many ways. Our thoughts are with Foster’s partner Gretel, their two girls and the friends, colleagues and people Robert fostered along the way.