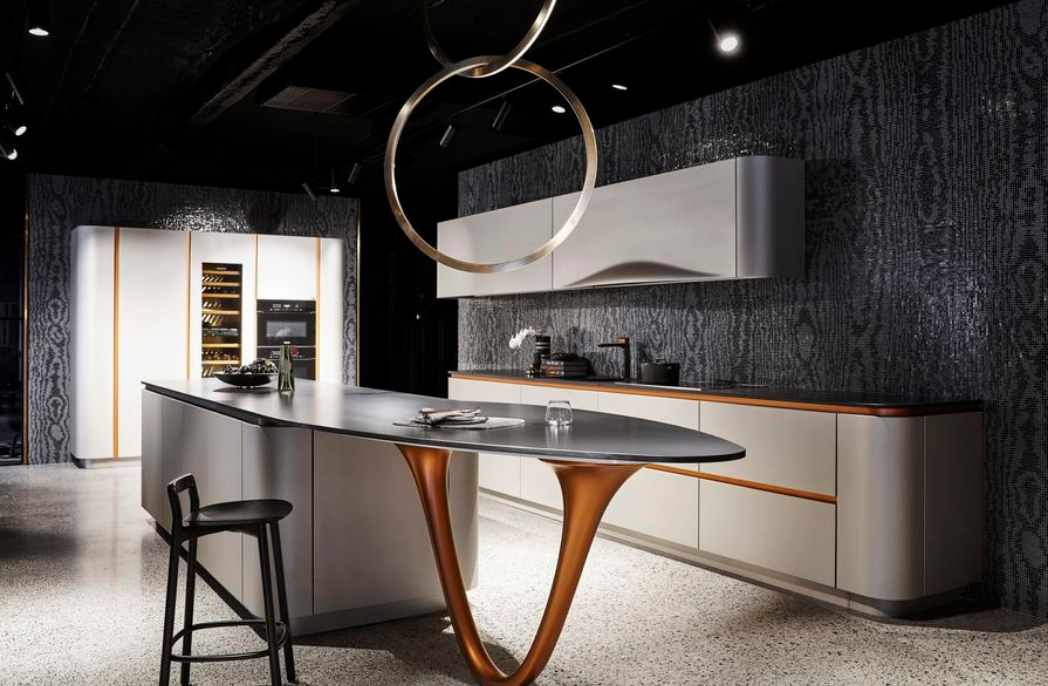 A look inside Snaidero’s Sydney showroom by Greg Natale

Underwritten by an elegant cohesion, the sprawling expanse that is the Snaidero Sydney showroom, exemplifies the design acumen of Greg Natale, as inside co-editor Gillian Serisier discovers.

Designed as a series of kitchen interiors commensurate with the quality level of the offering from entry level to Ferrari, each interior, while singular, is tied back to the whole to be traversed as a continuous flowing exploration.

Key to this execution is Natale’s floor plan, which allows each of the designs to be glimpsed and revealed with the natural rhythm of a home. The arrival counter is utterly sensational. There is nothing shy about the incredible faceted brass counter face or wall, and neither should there be (brushed brass, medium gold patina, Bronzeworks).

Located in what was once a fairly dodgy end of Redfern, the showroom needed a beacon of opulence to signal it from its surrounds. “I wanted it to be seen from the street, but obscured, so you had to walk in and experience it first-hand,” says Greg Natale.

To this end, he has delivered quite the moment. Set back from the glass doors at a half mezzanine height, the foreground and stairs have a slight industrial feel. The reception counter, however, is anything but, with a vast expanse of heavily striated black Jurassic marble (CDK Stone) giving great drama to the sculptural brass facing and surrounding free- standing walls. 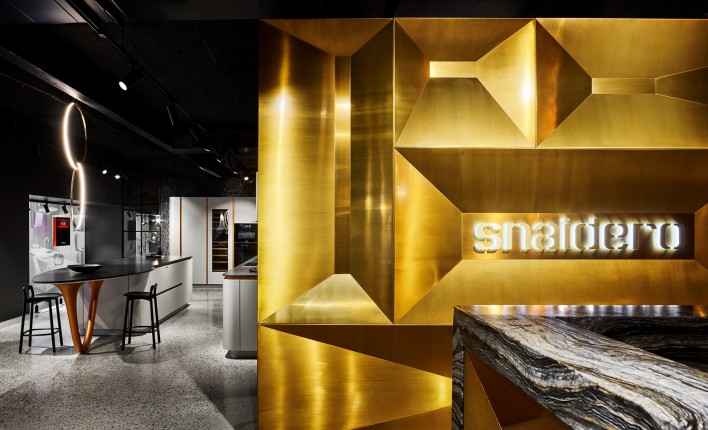 A geometric brass pendant lamp forms a visual balance with the Snaidero name in neon set within the wall to the left. For Natale, it was imperative that there be nothing boring about the showroom, nor was he content to have the areas linked by a motif or similar device.

Rather, the whole needed to be cohesively linked while each of the kitchens remained unique. To this end, he has elected to strip the space back to the raw shell and allow certain elements to be continuous.

The floor is the most latent of these with its existing loose terrazzo polished back to an even surface that remains lightly industrial while taking on a modernist edge. Ceilings were stripped right back to the shell, with only the ducted tubes, vents and utilities remaining. This was painted black throughout. For each room, however, the ceiling has been addressed as appropriate to the interior. 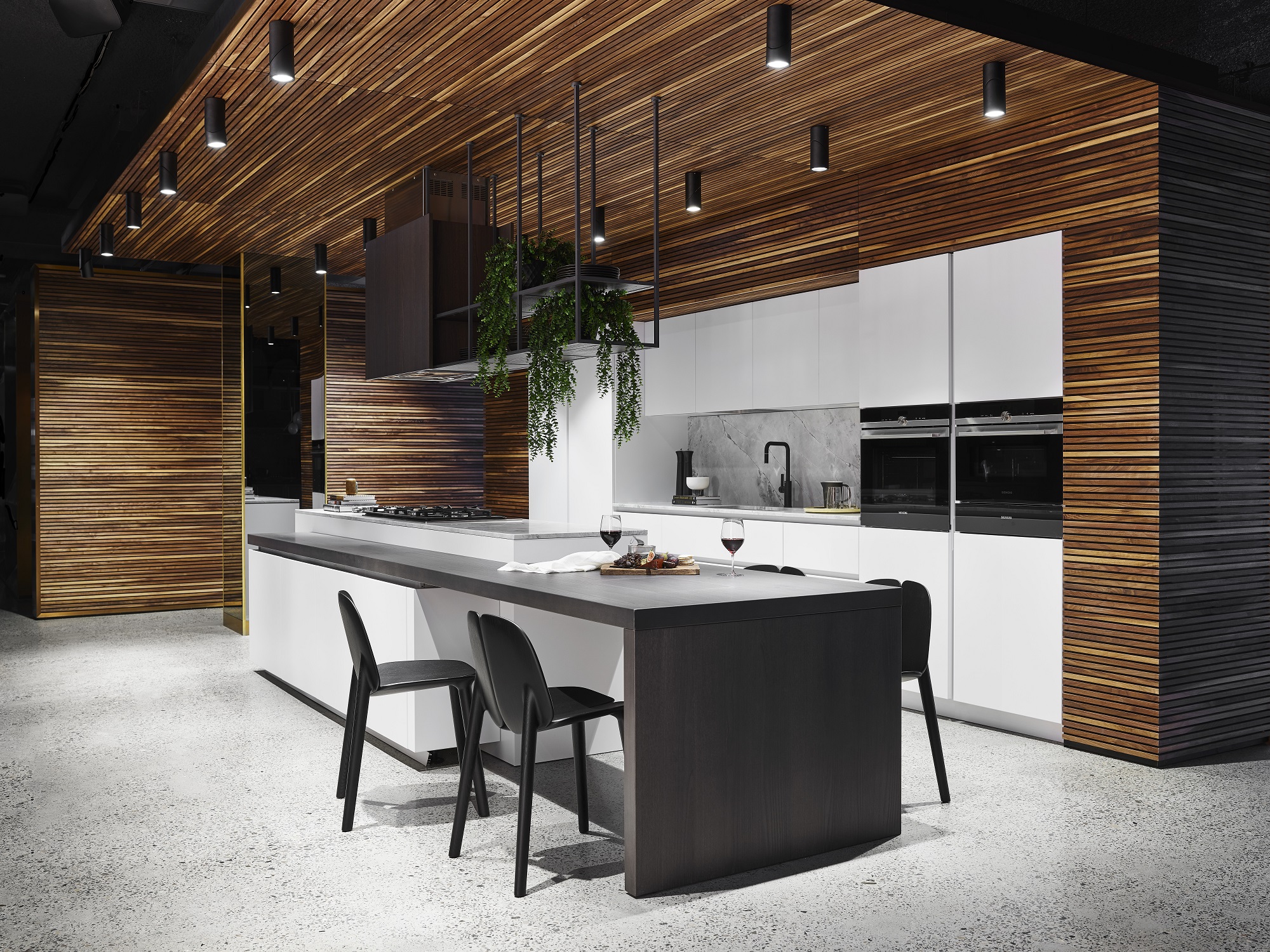 In Opera, for example, a suspended grid has an array of Canon lights and an over counter suspended shelving system. For Way, the ceiling is a suspension of white slats, while Look features a ceiling of timber that continues from its walls (espresso, Screenwood).

The other commonality is a great lack of plasterboard. “In most of the homes I work on there isn’t plasterboard in the kitchen, so it made sense to exclude it from the showroom,” says Natale. “The exception is Joy, which is the entry level kitchen, so appropriate for developers and multi-res where there is going to be plasterboard, but even so I had to paint it pink.” (Portrait Pink Dulux).

Directly behind the large brass wall is the working Snaidero kitchen where the activity of workshops and in-house catering can be glimpsed from reception to provide a tempting invitation to enter the showroom proper. This first execution, Way Materia, is strikingly monolithic, yet in subdued grey stone with a slightly darker shade for the cabinetry and simple geometric light (Hex 750, Resident Studio), a precise counterpart to the bling of the entry. 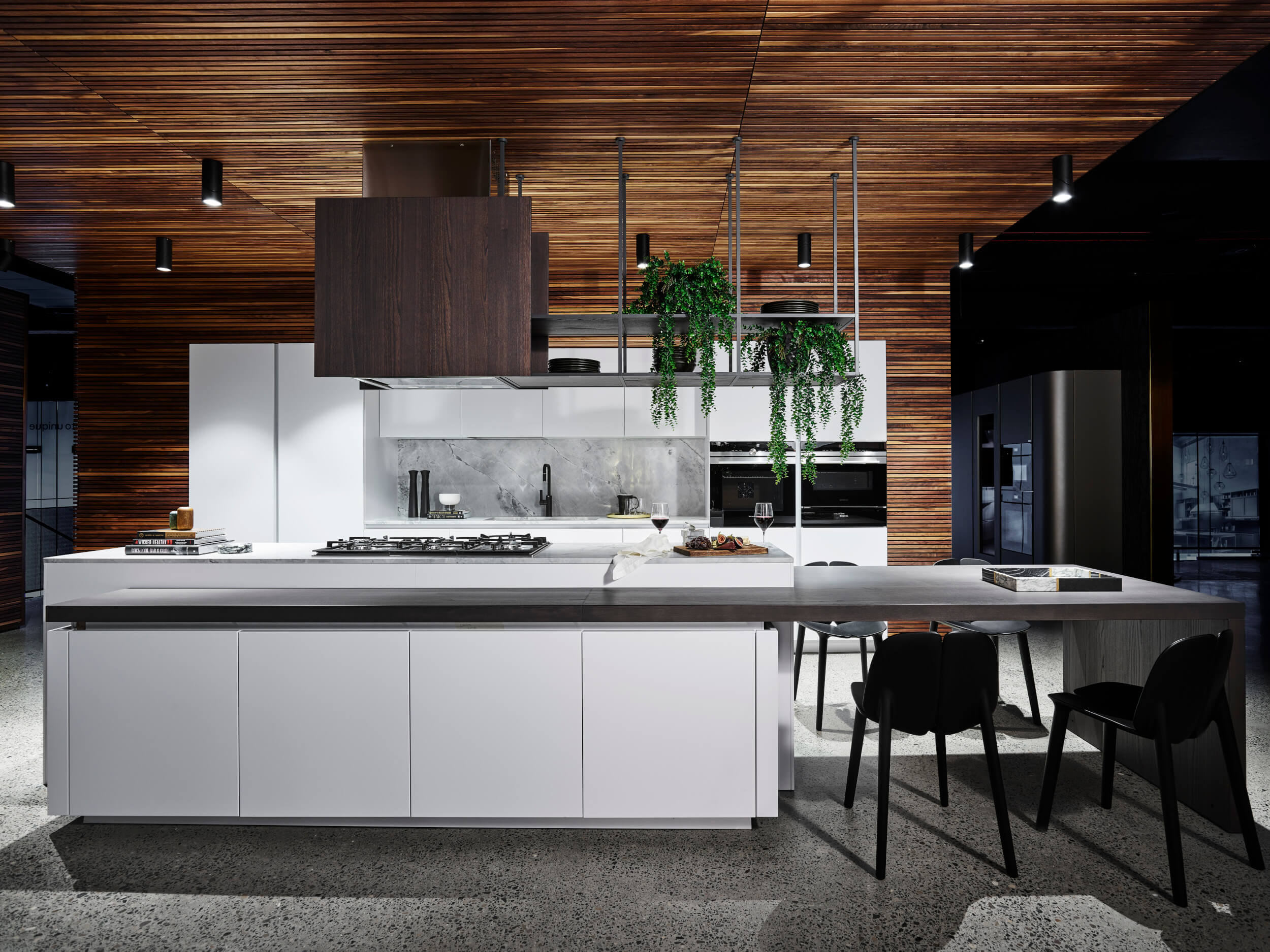 “It’s a cliché to say lighting is important, but for a project like this, where it is both a kitchen and a showroom, the lighting has to deliver both mood and practical illumination, there must be ways to manipulate and control the environment,” says Natale.

To this end, black track mounted spots (LPA) are set invisibly into the black ceiling to provide ample light, while the above counter pendant adds a sculptural element when the kitchen is in use and a theatrical touch when it alone is lit at night.

As it is an entry level offering, the design for Joy is light, young, interesting and achievable. Focusing the room is a set of large bell pendant lamps of various sizes (Normann Copenhagen). The colours are muted and softly reflective of the grey of the floor and pink of the walls. 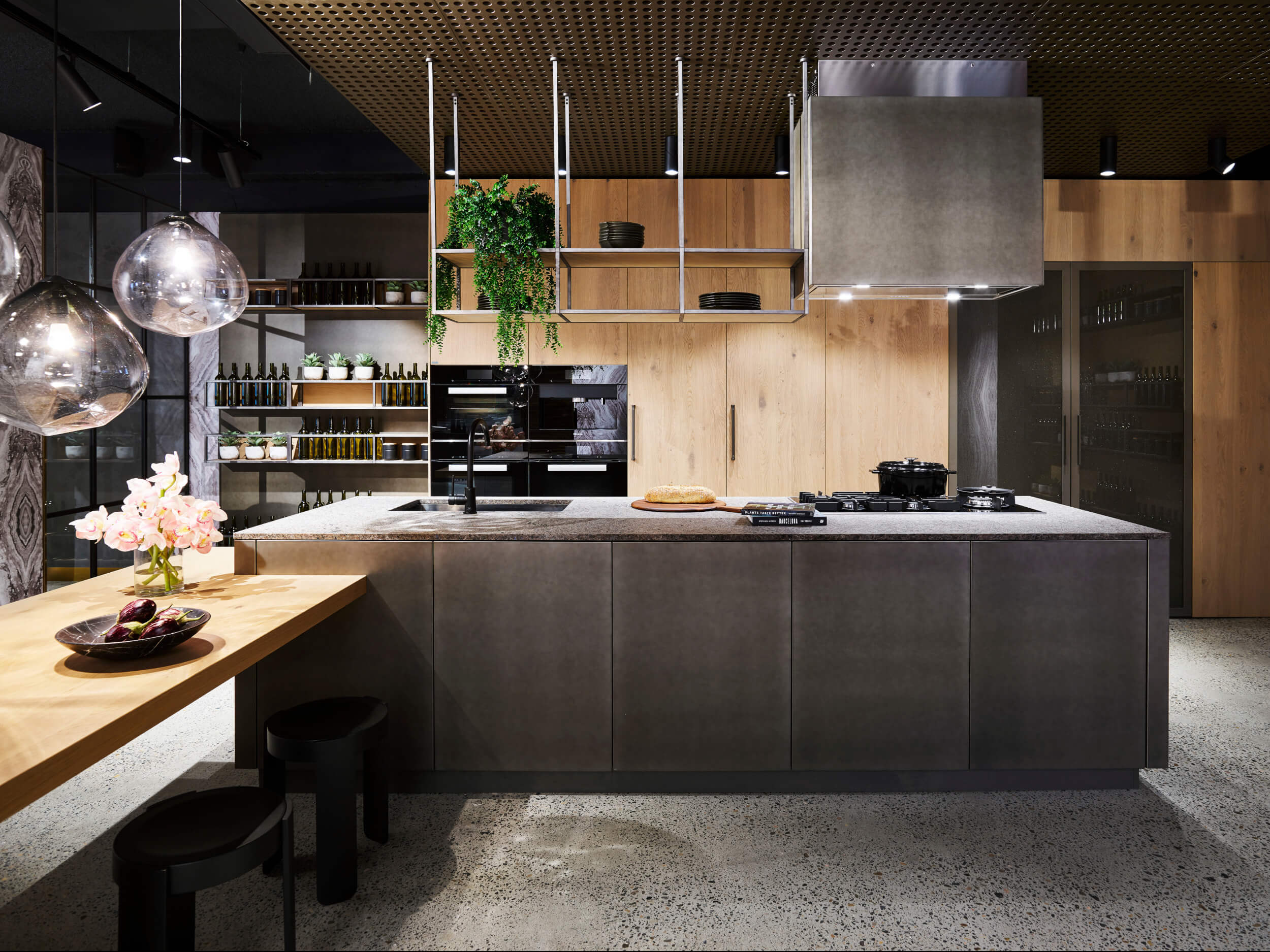 The domesticity of the dining setting continues the target audience relevance as both an aspirational and attainable apartment interior. Conversely, the Ola execution, which showcases the Pininfarina designed Snaidero elements (Pininfarina is the design and engineering company behind Ferrari) is all about opulence with a floating brass rings pendant light (District, Circus 750), sleek lines, curved detailing and the bachelor chic for which Natale is famous.

The walls are exceptional with an extraordinary mosaic of moiréd deep grey (Greg Natale, Moire Mosaic, Black, Bisazza). Interestingly, Natale’s touch allows that these geographically separated rooms flow effortlessly with the pink and grey palette of Joy harmonising with the sleek forms of Ola via the transitioning presence of the grey stone wallpaper used in Opera.

Similarly, as the corner is turned and Ola gives way to Look, the mosaic and timber perform an equally agreeable transition. Throughout the project Natale was interested in creating liveable spaces in which people could picture themselves. 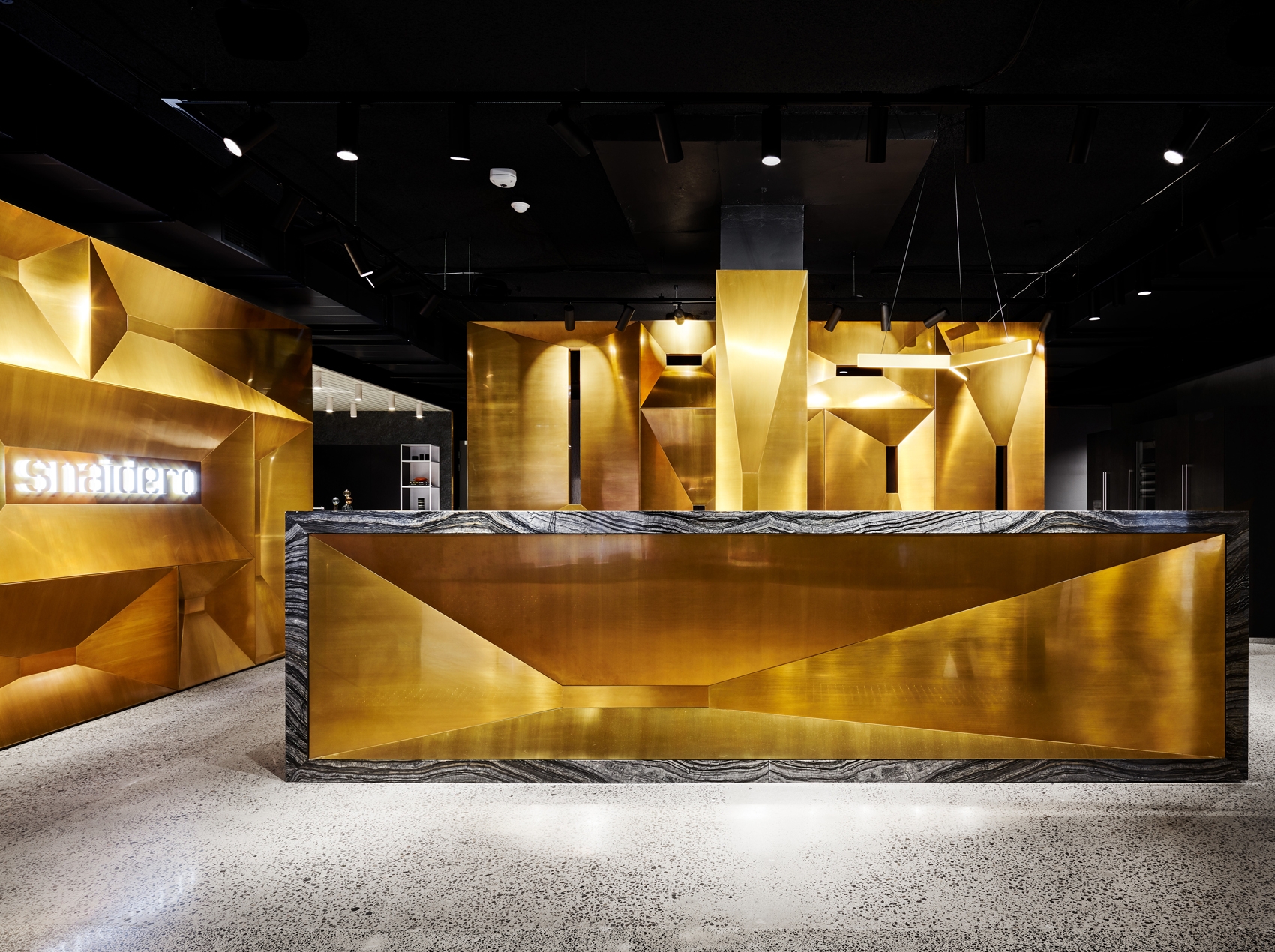 To this end, the design includes tableaux where a chair and rug have been added, or an arrangement of accessories, bowls and such like have been laid out. What really strikes a chord with the showroom design is the range of Natale’s aesthetic.

Each execution speaks of his oeuvre, yet each is entirely unique. Opera, for example, is housed within a beautifully warm interior of honeyed timber, with free form blown glass pendants (HG, Parison) and luxuriously large working surfaces. 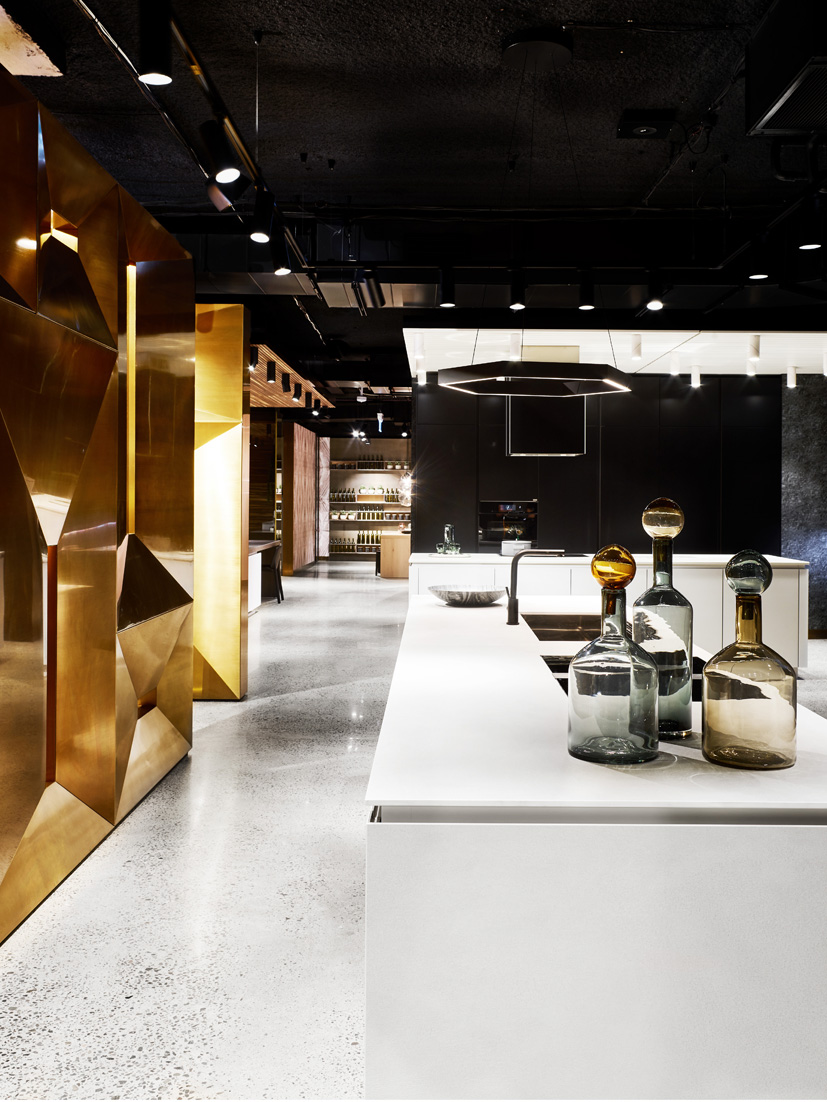 Yet, the walls have not been allowed to fade into the background. Rather, Natale has brought action and life to the interior with a wallpaper of an oversized marble book match (Anguilla Emperador, Zinc Textile). It is this degree of detailed and incredibly rich design that sees Natale continue as a leader in the commercial retail design sector.

The belle of Bondi by Greg Natale

The Asian Grocer is a contemporary interpretation of the traditional market