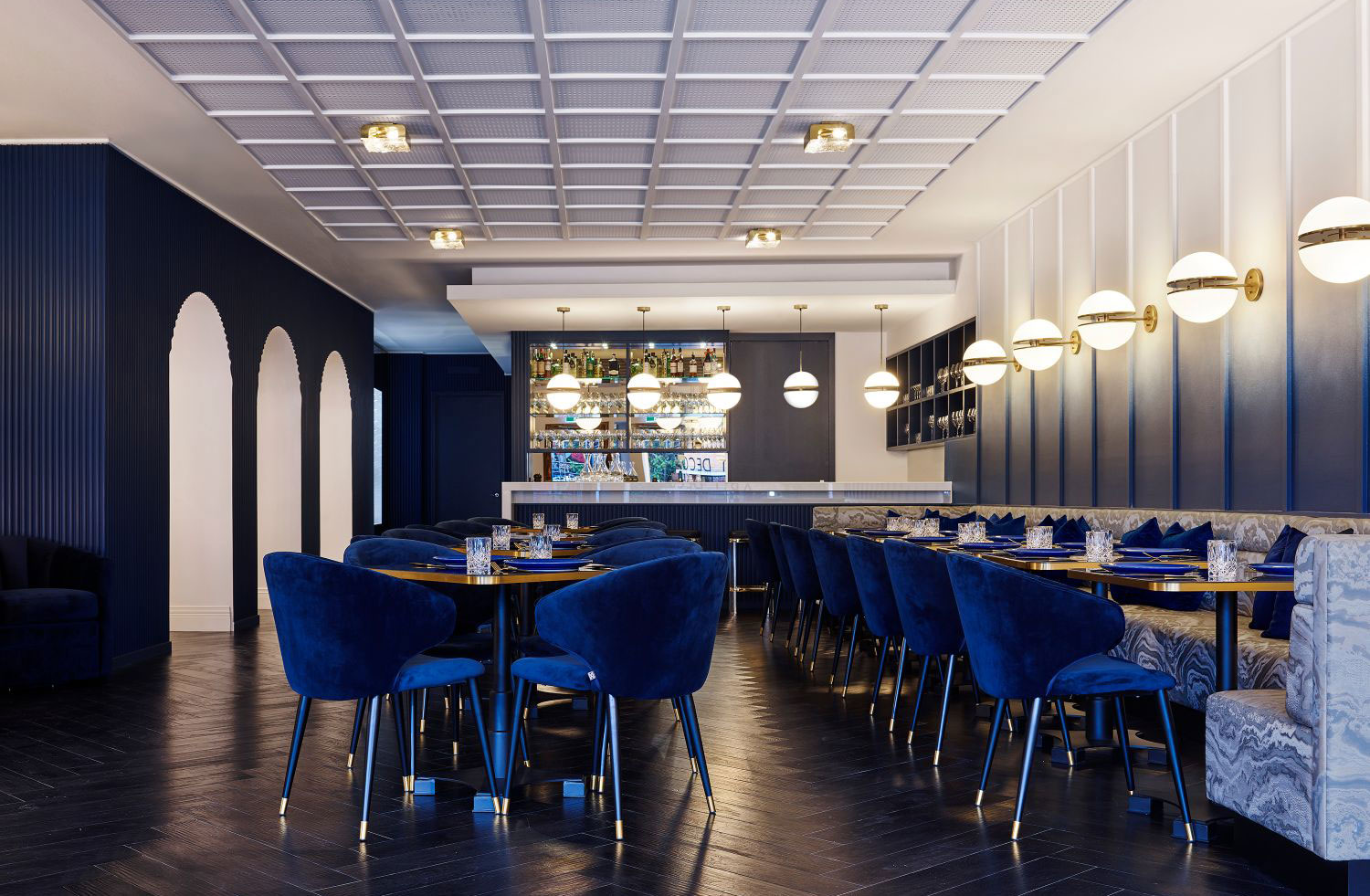 The pairing of designer Greg Natale and design house James Said is a virtuosic exploration of Hollywood Regency that just gets better and better with the impeccable James Said showroom and Le Plonc restaurant and wine bar.

Housed in an old theatre in the leafy suburb of Armadale in Melbourne, the space is vast, really vast, at 1400 square metres with ceiling heights of up to six metres.

Additionally, the upper floor ceiling is arched with impressive Heritage detailing, most of which has been covered for decades.

First opened in 1912, the theatre has been through a number of iterations, including cinema, vaudeville playhouse, toy factory, auction house and once even an indoor ski school complete with ski slope, which is possibly when the ceiling was hidden.

Greg Natale’s task was to humanise the space, and create scale and backdrop to the furnishings, while delivering an accord with the James Said brand.

Heritage concerns were also addressed, with Natale championing the decorative arch detailing and bringing this lost element back into play.

The premises are split over two floors – the lower floor houses the luxury accessories showroom and Le Plonc restaurant and wine bar, with a grand staircase cutting through the whole to the main showroom and interior design studio above.

Tying both floors together are the pared back white walls and black stained timber floors, which on the ground level mimic the original floor of the upper storey. The lower level is somewhat more contained with high, but manageable ceilings.

A trio of contemporary chandeliers over the staircase are used to drop the height, while large-leaved plants (Strelitzia nicholii or giant birds of paradise) to either side broaden the staircase visually. The Heritage detailing of the banister has been restored and brought into focus via the crisp white walls.

Natale is exceptionally good at creating context and here the era and particular style of Armadale is allowed to hold sway. To this end a large open corridor of dark timber flooring, golden pendant and wall lights and a hall table provide an intermediate space between the leadlight of the original windows and modernity of the accessories display.

Hand painted ombre’d walls shift from the black of the stained timber floors to deep blue before fading to the crisp white of the ceiling.

“I wanted to give the restaurant a strong signature that was very Armadale, and really make it separate from the Californian restaurants,” says Natale.

A fluted wall detail provides a containing element and accentuates the colour shift beautifully, as does the furniture upholstered in a shade to match the deepest of the transitioning blue. Brass rimmed white Spiridon wall lights further envelop and posit this area as discrete.

Within the Le Plonc restaurant and wine bar the blue is mitigated through a marbleised fabric of blues and greys used on the densely padded banquette.

A full wall of fluted blue detailing gives dominance to the enfilade of arches, while further into the room, and closer to the street view and leadlight windows, the mood shifts again with the blue intensified with lounges and lounge chairs of the same dense rich blue of the wall.

The simple gold and white lamps are similarly escalated to a magnificent pendant feature of 12 Spiridon orbs.

Looking backwards through the space, the same orbs run as a continuation from the wall to pendant in a straight line across the bar. Glass and bronze, the detailing of the coffee table, side tables, lamps, chair feet and accessories, create areas of reflection and absorption while keeping the palette minimal and rich.

Having split the lower floor in two, Natale has designed the interstitial space behind the stairwell to facilitate both the showroom and restaurant.

Obscured by a series of high slim arches the room is read by degrees. Effectively, the space is a continuation of the showroom where a tableau of lounges and lighting has been selected to wow, while deep gold upholstery gives the room an incredible richness.

When transformed to read as a natural extension of the restaurant with deep blue chairs and white damask, the room also works as a private dining room. Arguably it is in this iteration it is most successful, with the arches forming the architectural equivalent of a velvet rope.

The upper floor is the showroom proper with its soaring ceiling heights. Rather than conceal the ceiling or play on the scale for a single grand space, Natale has designed walls and beams that create rooms within the room without negating the whole.

The beams, while additionally providing a vehicle for suspended lighting, create a rhythm of human and domestic scale, whereby a bedroom suite is roughly the size of a bedroom and so forth.

“It’s important to get that scale right so people can see their own home in the space and see that you can have a magnificent light over a bed or a stronger colour than they may have considered,” says Natale.

Panelling to the lower third of most of the walls compounds the scaling device and gives containment and intimacy to each of the 20 spaces. Forgoing his usual white on white, Natale has used a slightly softer shade.

“I love stark white, but went for cream to add intimacy, and soften the space and architectural lighting,” he says.

The softer shade has also allowed a range of feature walls, including a corner of velvety deep blue, a vestibule of teal Japonaiserie and a vast wallpapered wall of wild tropical foliage.

In this area furniture in bronze, dark timber, cream and a soft mushroom beige works magnificently. As does the exuberant feature lighting seen throughout.

“We’ve put in architectural lighting to focus on the product, but the feature lighting is allowed to be the main focus,” says Natale.

Glass is a recurrent theme and one that dates back to the store’s origins.

“There has always been glass with the James Said brand from when it started in Perth. I wanted to incorporate it beyond the furniture and really bring it into defining the brand, while adding texture within the space,” says Natale.

“The office needed to deliver contemporary clean lines against the arches. It’s really beautiful and you need to create a way for people to see that contemporary and Heritage can work together,” says Natale.

Housed on a mezzanine, with a massive arched window as backdrop, the counter and desks beyond read as symmetrical expanses. It is here that the restored architectural details are most evident, with the arches once again defined and sweeping, while a magnificent dome dips back into the room to flood the whole with light.

With every project Natale undertakes, his ability to capture the client’s vision becomes more apparent.

Granted, there is a Natale style for which his clients seek him out, but underlying his aesthetic is a highly trained architect and interior designer who understands space like no other. James Said showroom and Le Plonc restaurant and wine bar are perfect examples of this superstar designer at his best.

Natale recently completed some renovations of his own, launching his first retail store in Sydney, where custom rubato tile Jurassic marble columns display his homeware collection.