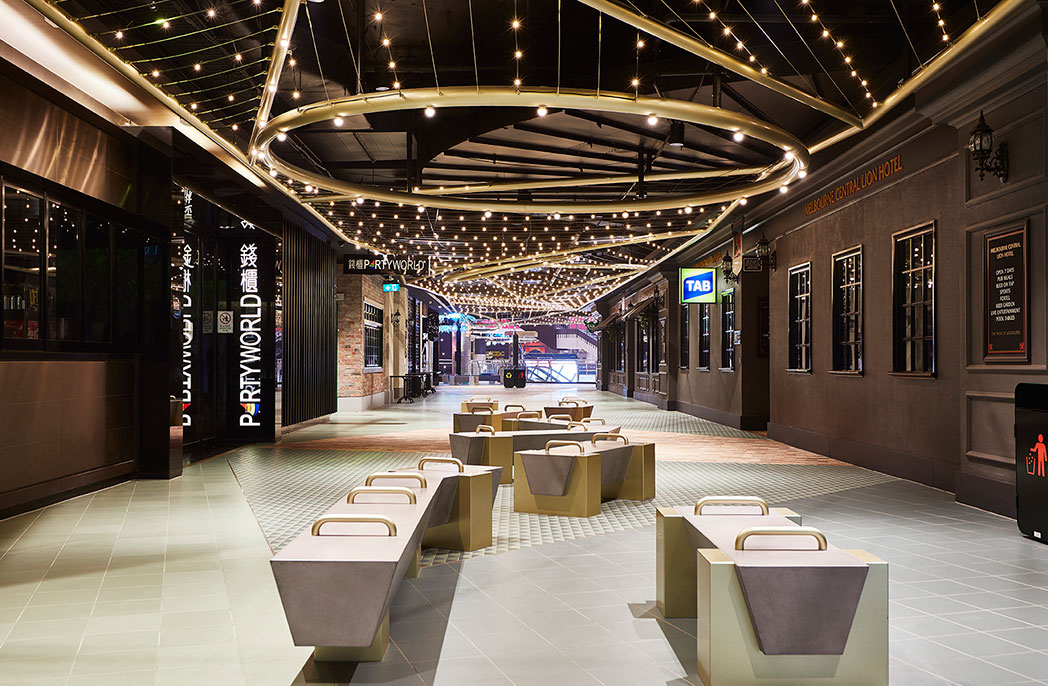 Technē weaves one floor of Melbourne Central with web pattern

Melbourne studio Technē Architecture + Interior Design has just completed a makeover of Melbourne Central, infusing the complex with a web pattern that emphasises “connections between spaces and destinations”.

The studio focused on overhauling the third floor of the city shopping centre, replacing the red fluorescent lighting battens with strings of lights and gold tubing.

“Just as the centre itself is widely recognised in the city by locals and tourists, we wanted it to abstractly relate to a pattern we are already familiar with, subtly connecting the centre with other Melbourne architectural icons,” says Technē director Nick Travers.

“Weaving the city’s identity into our Melbourne projects is something that comes organically to us and similarly it works vice versa where we hope our designs also play a role in the city.”

Melbourne Central’s third floor is home to a selection of entertainment venues and restaurants including Hoyts, Grill’D, Pancake Parlour and TGI Friday’s.

“The geometry of the extensive floorspace is unusually shaped and the fragmented approach to the floor and ceiling treatment helped to ‘stitch’ the spaces together, making the concept of Kintsugi perfect here.”

Kintsugi is a Japanese craft that involves re-joining broken fragments with gold. It’s thought to have originated when a Japanese shogun sent a damaged Chinese tea bowl back to China for repairs in the late 15th century. When it was returned, repaired with ugly metal staples, it prompted Japanese craftsmen to look for a more aesthetic means of repair.

Overtime, the craft also became a philosophy for accepting things as they are.

The studio’s choice of a Japanese craft helps tie the new space into the existing shopping centre design, complementing the 20-storey glass cone that was designed by Japanese architect Kisho Kurokawa in the late ’80s.

This cone forms an atrium at the centre of the shopping complex. Within its smooth shape, the facade is a composition of heterogeneous materials, such as stone, aluminium, reflective glass and tinted glass in a similar web pattern also designed with the symbiotic existence of past and present in mind.

“Techne’s design provides a renewed visual experience when traversing the level itself as well as viewing it from the centre’s other vantage points,” says the studio.

Dominating the space is a digital visual installation by TKM9 of an animated tree and sci-fi garden. The Melbourne creative communications agency also designed an interactive game and ribbon light.

“Level 3 at Melbourne Central is now much more akin to an artist’s installation with its bold colour and patterns where the colour green is prominent.”

Founded in 2002 by Travers and Justin Northrop, Technē is behind the renovation of some of the city’s other icons including The Espy, as well as Heritage homes like this one in Carlton.