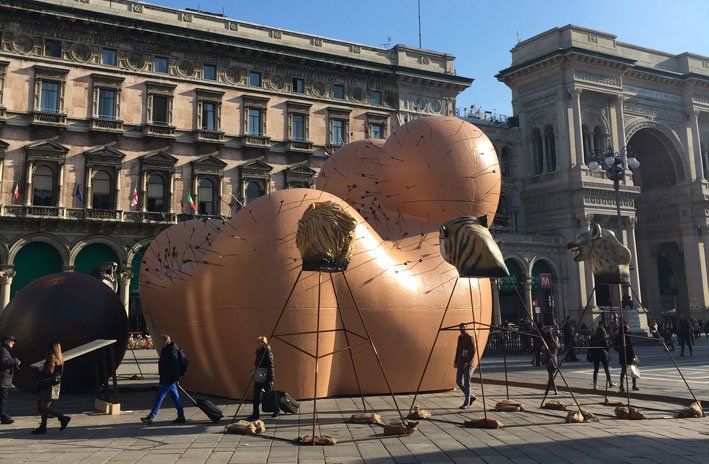 Organisers of the unofficial ‘fuorisalone’ events that accompany Milan’s Salone del Mobile are frantically rescheduling for later in the year.

The decision to move the events, along with Milan’s Salone del Mobile, from its annual slot in April to 16 to 24 June was made after Italy declared a state of emergency yesterday.

The country has become the main focus of the coronavirus infection in Europe with more than 400 confirmed cases as of publication.

The worst-affected areas are in the industrial north of the country – Lombardy, the region around Milan, and Veneto near Venice, where a total of 55,000 people have been quarantined.

In a statement on Instagram, fuorisalone.it – the official guide that accompanies the more than 1000 events – said coordinators were working to postpone their dates “with the aim of maintaining the format that has made Milan Design Week the international reference point for the world of design.

“It is a complicated process that must be managed in the best possible way and requires the commitment of all the operators, companies, partners and sponsors involved.”

Fuorisalone started spontaneously early in the 1980s through the work of individual companies in the furnishing and industrial design sectors. Some of the best known events include Brera Design District + Lambrate Design District, Ventura Centrale and Ventura Future, Isola Design District and 5Vie Art + Design.

“The Salone del Mobile has decided to move the dates of the event to June. Having taken note of this situation we will speak to the various partners and operators, companies, sponsors and all those involved to understand who will follow the new dates, who will cancel and who will decide to do otherwise. Now let’s focus on the work, avoid comments or wasting time. We need to understand how to reorganize the operating machine and realign everything with respect for everyone’s work, investments and existing projects,” it read.

The decision will most likely also affect Australian designers who were planning on exhibiting. Last year, DesignByThem produced In Milan: 12 Years of Australian Design, an exhibition showcasing over 30 of its signature pieces.

There are fears that organisers will struggle to find exhibiting spaces as the new dates coincide with Men’s Fashion Week, which is also held in Milan.

It’s also graduation season, which might prevent students from attending or exhibiting at Fuorisalone 2020. But the move has the support of the mayor of Milan, who issued a statement yesterday.

“Confirmation of the change of date for the trade fair – strongly supported by the mayor of Milan Giuseppe Sala – means that the manufacturers, in a major show of responsibility, will be able to present their finalised work to an international public that sees the annual appointment with the Salone del Mobile Milano as a benchmark for creativity and design,” it read.

Salone del Mobile is not the first big design fair to be postponed due to the spread of the coronavirus. Design Shanghai in China and Frankfurt’s Light + Building fair have also changed their dates. As has MIDO, the world’s biggest eyewear fair.

The coronavirus has spread to 42 countries. The total number of cases to date is 80,415 with new cases in France, Spain, Bahrain, Kuwait, Austria, Algeria, Croatia and Switzerland.

In Australia, there are 23 confirmed cases.