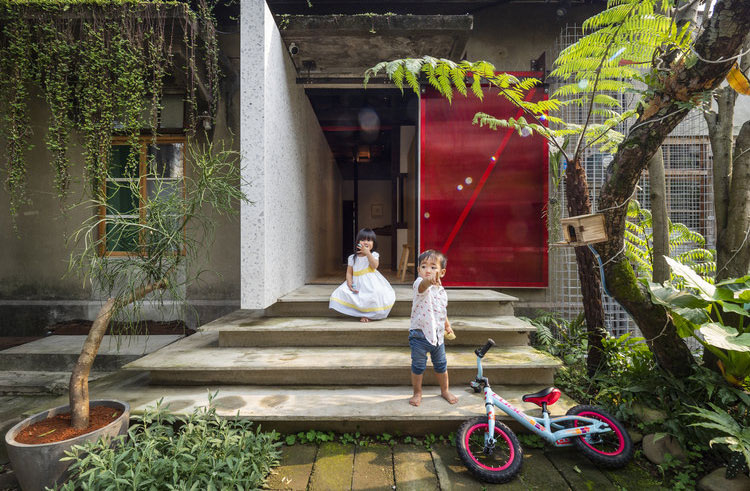 Part of the World Architecture Festival, the INSIDE Festival of Interiors was held in Amsterdam this year.

Like its architectural sister, the competition required the designers to present their projects live to a panel of judges. Only category winners were eligible for the final prize.

The formerly dilapidated Japanese colonial house was described by judges as being “unusually in tune with the differing and sometimes contradictory needs of a young family. Every space can be negotiated and adapted, encouraging the house to be an incubator for positive difference in the family unit”.

The project combines traditional craftsmanship and recycled elements like the japanese hinko timber window-frames, marble flooring and old vines with new features like pendant lights and the red front door. The roof skylight shapes a path that acts as a guide for the house from beginning to end.

A red exterior staircase reaches up to the roof, connecting the ground to the sky and encouraging the home’s youngest residents to explore their surroundings.

Additional communal spaces were added to the main house, including a kitchen and living room, as well as flexible spaces for group gatherings designed to create connections and interactions.

The project was designed as a prototype for the Japanese army dormitories and homes that are scattered throughout Taipei.

Judges particularly praised designers for the careful way in which they considered both children and adults in the completed project and explored the notion of experiencing the streets outside from inside the home.

J.C Architecture is a multidisciplinary design firm based in New York and Taiwan. It was founded by Johnny Chiu and was shortlisted at last year’s INSIDE Festival for Logistic Republic Automation Warehouse.

CAN BORDOY by OHLAB, a 24-room hotel located in the La Lonja neighbourhood of Palma de Mallorca and Classroom Makeover for the Blind by Creative Crews in Pattaya, Thailand, were also highly commended for INSIDE World Interior of the Year.

Last year’s winner was JAC studios for the Yumin Art Nouveau Collection in Phoenix Jeju, South Korea. The exhibition features glass work produced in the Art Nouveau movement between 1870 and 1940 by the French artist Émile Gall.

Australian winners at the INSIDE Festival of Interiors

BVN’s B:Hive, Smales Farm was the only-Australian designed project on the shortlist. It was designed in association with Jasmax and won the Offices category.

Located in Auckland, B:Hive is New Zealand’s largest co-working building, home to a community of over 900 employees across 100 businesses.

The B:Hive delivers a big corporate environment to small to medium businesses through technology, design, amenity and meeting and event spaces.

The judges said it exemplified sustainable and flexible workplaces where the “needs of the users informs the architecture”.

Aesop’s Bondi Junction Sydney Signature Store by MLKK Studio was the only Australian-based project to win, taking home best Retail, with judges describing it as a “very sophisticated solution where a series of contrasts results in a very informed design solution”.

The Hong Kong-based design studio has handled multiple Aesop stores and drew inspiration for the Bondi one from the raw pinewood framework used in housing framing construction in suburban Australia.

The shopfront is composed entirely of exposed pine stud framing and plastic laminate reminiscent of ’60s design. The ’60s theme is carried through the interiors with plastic door handles, ceramic mugs and the stainless steel kitchen basin.

The INSIDE Festival of Interiors’ other category winners

Health and Education – Classroom Makeover for the Blind (Pattaya, Thailand) by Creative Crew