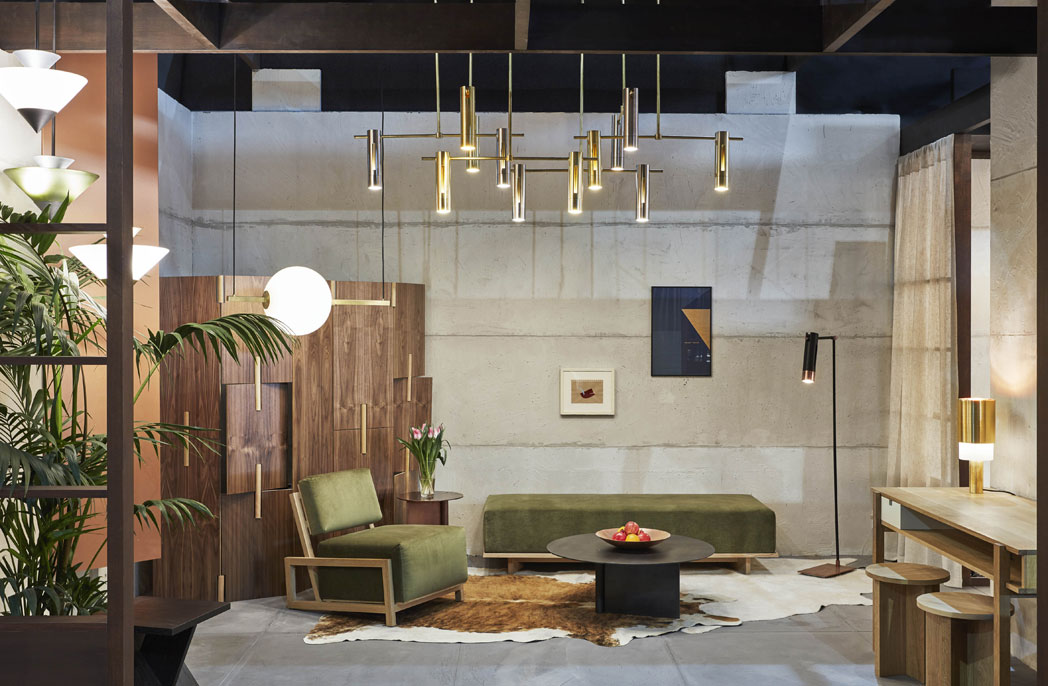 In conversation with Gabriel Abrahams of Atelier de Troupe

The sights and sounds of Milan Design Week can be overwhelming, but in amongst the noise was a stand with elegant and eye-catching product. ADR editor Aleesha Callahan chatted to Gabriel Abrahams, founder of Atelier de Troupe, about the mid-century influences and how Ace Hotels kick-started it all.

Can you tell me a bit about yourself and founding Atelier de Troupe?

We’re from LA and we’ve been open since 2011. I used to work in the film business as an art director/set designer, mainly designing, drawing and building sets. Design is a pretty small industry in LA and one day I got a call from Commune Design, who are a bit like rock stars, and they asked me to do the Ace Hotel downtown. Right after that, we did the Ace Hotel in Paramount, so I decided to quit my job in the film business and started making lights.

Your range has a mid-century feel to it, where does your inspiration come from?

Well, I always design for myself really, but in Los Angeles there is so much mid-century architecture. Our stand is actually inspired by Rudolph Schindler, who was Austrian and came to LA in the 1920s. He was one of the founders of modernism in LA, along with Neutra and Frank Lloyd Wright, among many others. When they started building in the 20s it was all about pure lines, as most of them came from the Bauhaus. There is definitely an influence from that era, and if you actually live in those kinds of houses then you need something that is timeless, something that tells a story.

Our designs use shapes that definitely have a Bauhaus influence, while some are a little more Art Deco – even French or Italian in feel.

We try to fill a niche. I think interior designers appreciate that our products look vintage, but in a way that it doesn’t matter if it’s not. For a designer it’s about creating a feeling, you don’t just want one style – it all needs to blend in.

We do new collections twice a year, which is almost like fashion. We also have custom work on top of that. Actually, by the time we get home from the Salone (MDW) we will be starting the new collection.

“Our designs use shapes that definitely have a Bauhaus influence.” – Gabriel Abrahams

The metals are all unwaxed but they age naturally and we do everything by hand. All the glass is hand blown in Los Angeles, along with all the manufacturing of the finishes, which means we have a pretty fast turn around – six weeks. We only make and ship out small batches.

We’re lucky that LA is one of the biggest manufacturing cities in the US. There are a lot of little artisans and because of the space there’s lots of metal shops in Pomona that know what they’re doing. Maybe not quite as good as Italian artisans, but they’re way cheaper. Plus, we’re a very small company so by having people nearby, we can just drive around and check the progress.

Can you talk through the concept behind your stand?

It was more about creating an atmosphere within the stand so we needed the whole thing to come together – the lamps and the furniture. The furniture came after the lamps to make sure it all complimented each other. We tried to keep it clean. It’s more of a cinematic approach in trying to create a mood first, then the space and then the products.

Atelier de Troupe is not currently stocked in Australia, but products can be purchased through its online store. And anyone who has been to Arent&Pyke’s Alex Hotel in Perth may recognise the Tour Sconce.