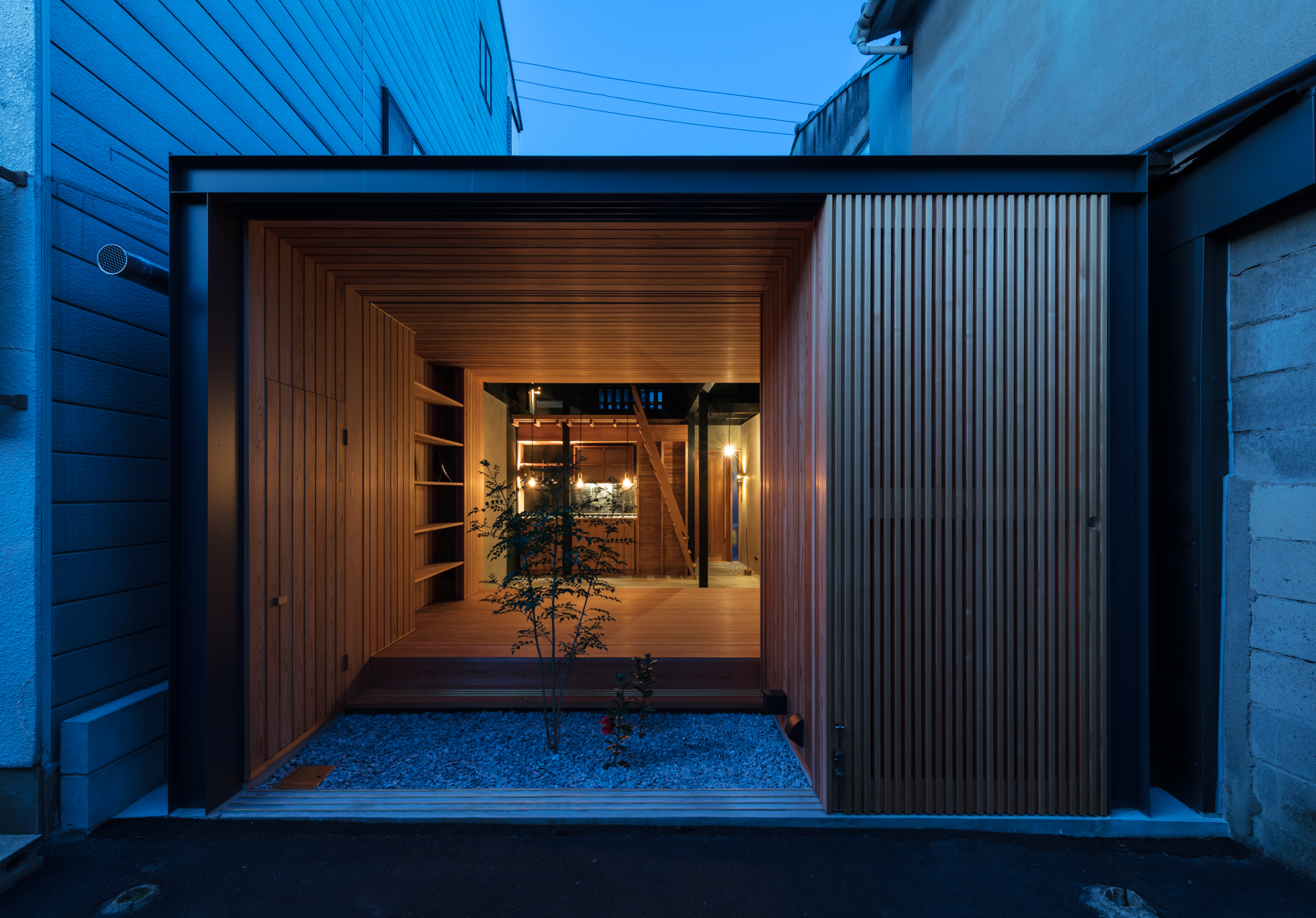 In his slim but enormously influential 1933 book on the Japanese aesthetic In Praise of Shadows, Junichiro Tanizaki warns against the “evils of excessive illumination”.

“We find beauty not in the thing itself, but in the patterns of shadows, the light and the darkness, that one thing against another creates… Were it not for shadows, there would be no beauty,” he writes.

Architect Luke Hayward fears it may be clichéd to cite Tanizaki as a reference for his latest Terrace house project. “It’s on every architect’s bookshelf at this point,” he says.

“But Shadows has a way of shaking you free of existing perceptions about how you have to use light and shade in a house, certainly coming from the Australian perspective.”

Raised in New South Wales and Queensland and educated at the University of Tasmania, Hayward moved to Japan in 2013.

The firm now designs across Japan and Australia, garnering international recognition for its cross-cultural portfolio that does not hybridise national styles, but creates something entirely new.

The design studio’s latest project, Terrace house, is a renovation and extension of a machiya: a typical 1950s row house located in the northern suburbs of Kyoto.

Stretches of these machiya homes, formerly the urban quarter townhouses of merchants and artisans, still exist in various stages of dilapidation and remodelling across Japanese cities.

Like its Tanizaki reference, and typical of machiya, Terrace house finds its beauty in a slim simplicity, set on a four- by 10-metre site between two narrow roads.

“You get away from the tourist centres in Kyoto and very quickly you’re in streets where multiple generations have lived in the same houses,” says Hayward.

“Over time there have been layers of alterations and additions put on top, but if you sit back you can still see that history there.”

It was in atelier Luke’s stripping back of these layers that revealed Terrace house’s core design narrative.

Internally, all linings were removed, revealing large timber roof beams that had been concealed for over half a century. Laid bare, the skeletal timber structure was a map of the way the minimalistic light would have worked in the original design.

The studio stained this entirely in black, a bare interior space that serves as a mesmeric, almost spectral, void around which the new home unfolds.

From there, atelier Luke’s interventions are made legibly distinct from the older structural features, with deep sequences of shadow augmenting the space of the small structure.

Here, sliding doors and screens allow for something rarely seen in introverted Japanese design aesthetics: a connection to the outdoors and street via a private garden.

Hayward describes this addition as a wink to the Australian vernacular.

“The exposed timber box actively spills out into that back street, effectively claiming that space as part of the house,” he says.

“This felt like a distinctly Australian choice, to borrow that surrounding landscape.”

Under the black void of the old structure and between the timber boxes, new walls and a floor of cement mortar define an intermediate space. A timber ladder allows access to the top of the bathroom box, with a sleeping loft of tatami mats.

All the timber was sourced from the Yoshino region in Nara and this cedar is the motif that forms the home’s structure, joinery, cabinetry and external cladding.

The cement floors and walls are a textual natural grey that references handmade finishing techniques. Custom lights and brass trims spark and flicker within shadows.

“Junko wanted a very tight material palette that would bring cohesion to the sequence of spaces and their different levels of shade,” explains Hayward, regarding the choices.

The studio restored the home’s front façade as a tribute to traditional Japanese exteriors. Lattice windows, known as mushikomado, ventilate the space, while also contributing to the sense of porousness between the streetscape and the interior.

In contrast, the new rear façade is consciously and distinctly non-traditional: a steel perimeter frame and timber batten screens.

“I’m always mindful of not trying to ‘do’ Japanese architecture here,” says Hayward.

“We have an existing building fabric that is a traditional Japanese housing typology and while we are working within that, we also don’t want to do a mimicry, or worse parody, of exactly what would have been done originally.”

Terrace house is atelier Luke’s second row house renovation, with a third currently in development. Speaking to his enduring attraction to the machiya, Hayward describes the challenge of their frame, their subtle light cues and their shy reveal.

“There’s a sequencing of their spaces that dictates how they show themselves to you and sometimes that starts back on the street. You’re not working from zero, you’ve got the existing essence of the home that you’re trying to play within and this framework is set by the weight of the light.

“It’s a real challenge because you could easily suffocate it. You could drown it in light or play up the darkness and swallow the space in eeriness,” Hayward explains.

“You have to be willing to get that feedback from the house.”

atelier Luke isn’t the only designer melding the Japanese and Australian aesthetic recently. Carr also penned a Japanese-inspired interior for this Melbourne Heritage home earlier in the year.