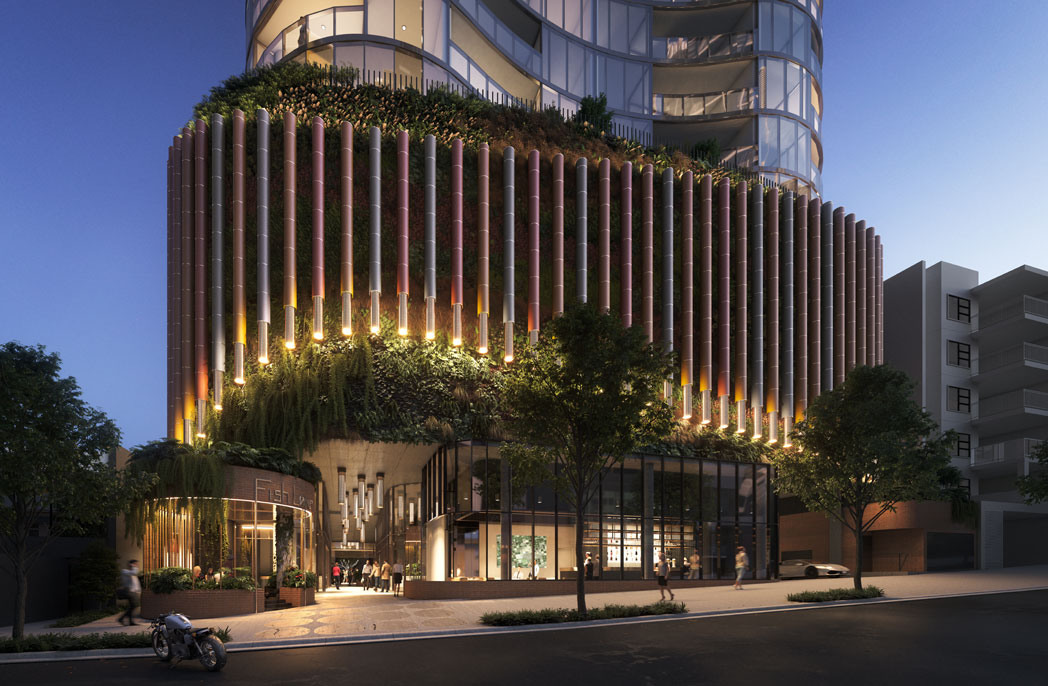 The design for the proposed cylindrical-shaped tower is set to provide the largest communal space for a development of its size in Australia. The proposal includes plans for a running track, dog park, car share scheme and wine bar.

261 apartments across 24 levels are housed within the four principal cylinder forms. The curving form translates into a curved floorplate, which was a deliberate decision to reduce the perception of bulk at street level. In addition, brick has been integrated into the façade at street level as a reference to the surrounding vernacular of West End.

“We are thrilled to be working with an experienced and reputable developer who understands the importance of quality and innovation in Brisbane’s competitive multi-residential market.”

Designed to peel open and become an extension of Fish Lane into the site, the four-level podium car park is screened by a living green wall. Cylindrical terracotta-look pipes are interspersed with vertical greenery and lighting to create a sculptural and striking base. Landscaping cascades from the top of the podium down the face between the pipes to create a woven pattern.

The communal amenity levels are described as ‘sky terraces’, to facilitate interaction and social connection between residents while giving access to city views. Facilities on the podium include a large fitness centre, theatre, wellness centre and 200-metre walking/running track that circles the building. The rooftop deck incorporates a 25-metre infinity edge pool, wine bar, outdoor dining and various intimate nooks to relax within a mature subtropical landscape.

The proposal contributes the highest ratio of communal recreation space per unit in the country, with 2800-square metres of space across the ground, podium and rooftop levels.

The building will feature two Tesla electric cars held in body corporate ownership for booking and use by any residents who wish to utilise the scheme. There are also provisions for a car hire scheme managed by a third-party operator.

The project is expected to progress to the next stage of design development in preparation to go to market in early 2018.

What to see at the Asia Pacific Architecture Festival