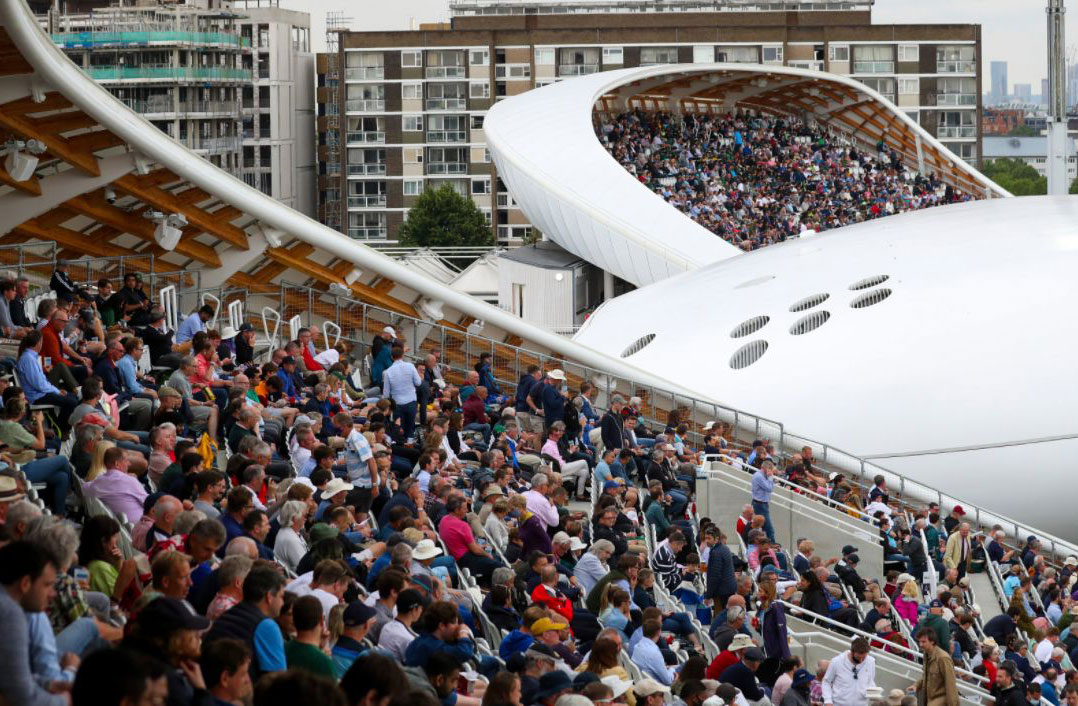 Work to replace the Compton and Edrich Stands at the historic London stadium began in 2018 with owners, the Marylebone Cricket Club, saying the new structures were part of ongoing plans to “futureproof the Ground”.

At 24-metres, WilkinsonEyre’s competition-winning design addressed the restricted sightlines of the previous stands by aligning the new ones with the Media Centre – named the UK’s best building in 1999.

“Designed with structural engineers Buro Happold, [the stands] deliver greatly improved sightlines and an enhanced spectator experience for cricket fans, as well as upgrading capacity, accessibility and amenities at the country’s premier cricket venue, known as the Home of Cricket,” says WilkinsonEyre.

An additional 2600 seats have been added across three-tiers, increasing the Ground’s overall capacity to 31,180. Half of the 11,600 seats fitted have been re-used from the previous stands to mitigate waste.

WilkinsonEyre describes the design concept as keeping with the historic and contemporary architectural context of the venue, imbuing each stand with a “clear expression of the engineering principles behind it”.

The steel mainframe of the new stands features large identifiable columns and double-height colonnades, which reference the “rhythms of the original brick arches” of the adjacent Mound Stand arcade.

Above them, the roof canopies cover all spectators – something the original stands failed to do. Their design is made up of a combination of white-painted radiating steel ribs, a visible timber supporting shell and a white fabric skin.

“[Their shape] complements the subtle curvature and form of the design, while creating a distinctive silhouette that corresponds to the tent-like forms of the Mound Stand’s fabric roof.”

The original white and grey seating is set in light grey concrete terracing, divided by glazed bands that mark out the premier seating and the J.P. Morgan hospitality suites.

“We wanted to create a heightened sense of sporting theatre for the new Compton and Edrich Stands,” adds WilkinsonEyre director Sam Wright.

“Allowing many more fans to share the match action, they have already become an instantly recognisable backdrop around the globe following the dramatic India Test and the hugely successful inaugural The Hundred finals.”

Accessibility is also a key feature in the new stands with clear open stairs, access walkways that overlook the Nursery Group and wayfinding, improving accessibility and crowd circulation. The stands also have wheelchair accessible positions, facilities and lift access at all levels for the first time.

From a sustainability perspective, the architects’ design incorporated the concrete structure and terracing of the old stands, which were crushed and used as the piling mat for the new ones, reducing the amount of waste material removed from the site.

The development of the Compton and Edrich Stands is the second phase of the major redevelopment plan for the cricket ground, masterplanned by Populous and scheduled to be completed by 2032.

With offices in London and Hong Kong, WilkinsonEyre is one of the world’s best known practices with a completed portfolio of projects that includes the Guangzhou International Finance Centre, one of the tallest buildings in the world, and Sydney’s One Barangaroo.

Last year, ADR caught up with principal Chris Wilkinson to talk about the design philosophy behind the latter.

Original stone flooring was the design inspiration for this London bar