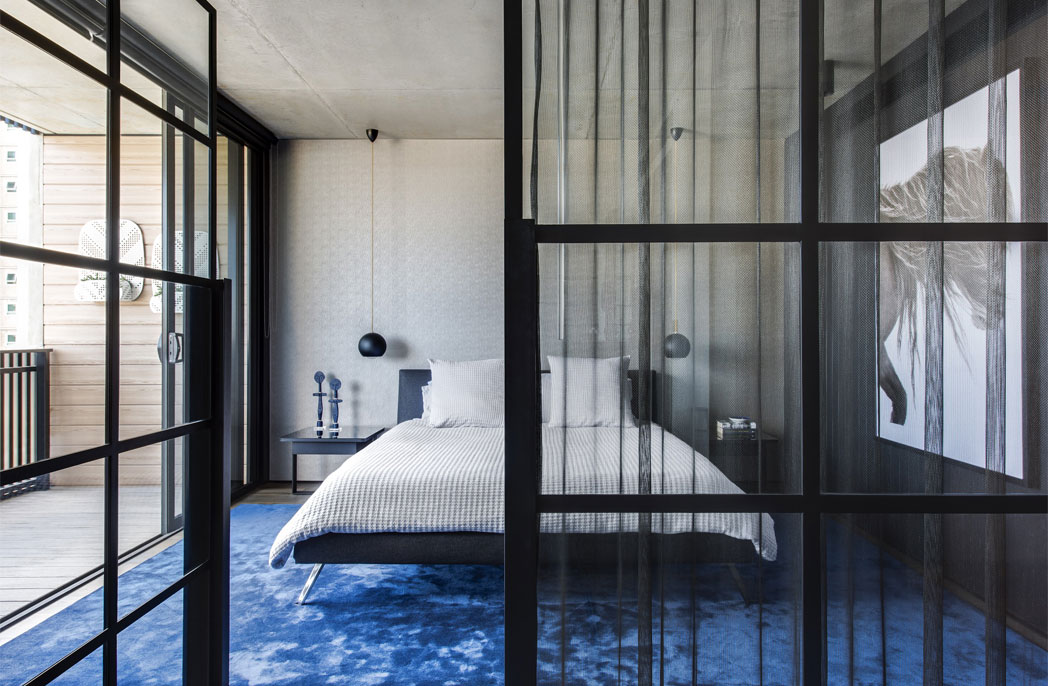 On a deep, narrow site in Collingwood, SJB’s Tapestry holds its own amid a variety of building types by directly addressing the myriad elements within its surroundings.

Comprising three volumes set at varying depths, creating an effect reminiscent of stacked building blocks, the building’s diverse façades have been united by a single concrete element that wraps right around the building. It’s a singular gesture that consolidates Tapestry’s many parts, and is battened to the lower level. Tristan Wong, director of SJB Architects, notes this element is also functional. “The closer the connection with the ground level, more noise, more interruption occurs. So creating this singular, veiled box, it gives a bit more privacy and to the lower and central lower levels.” 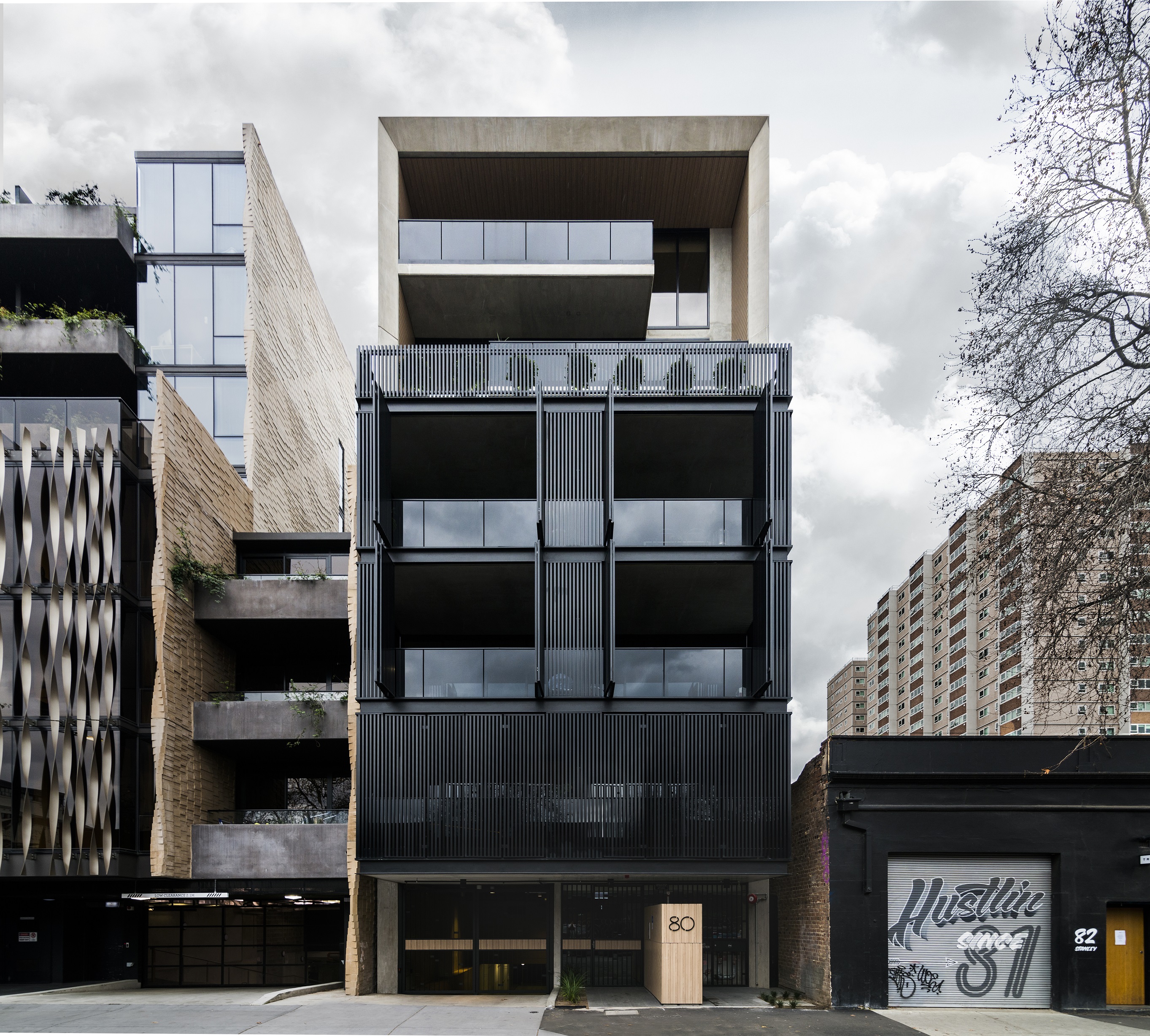 Tapestry’s upper-level penthouse is set well back from the street, with deep balconies along the street frontage. The building’s middle section has smaller balconies with moveable metal screens that open and close to let in light and warmth or to create a private outdoor area as required. And the ground lobby area is again set back from the street, allowing room for a jutting block-like letterbox that is at once utilitarian and sculptural. 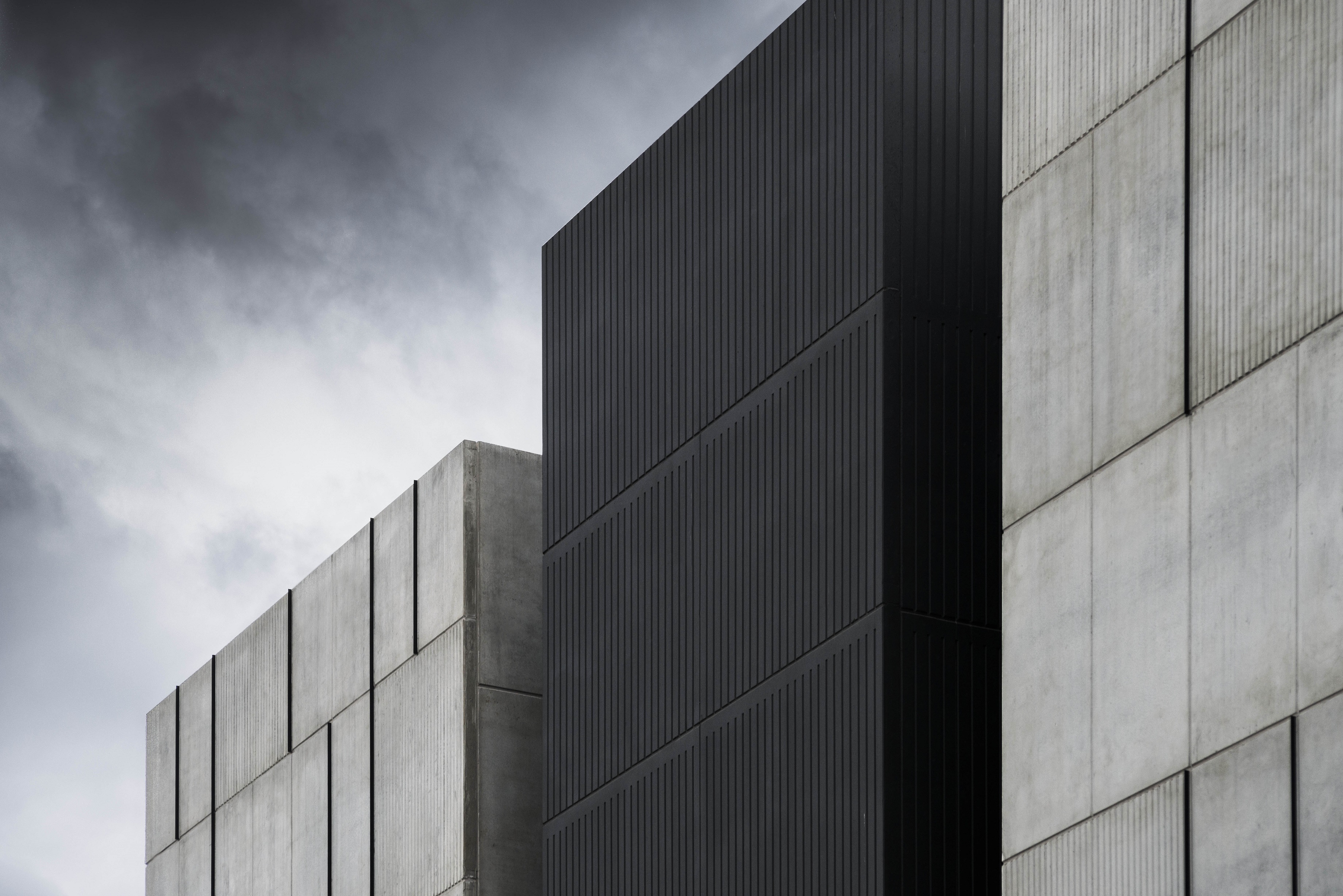 Michael Bialek, a founding director of SJB Architects, says the architectural approach for Tapestry is very fitting. “We like our buildings to have a kind of sculptural quality, we like them to have depth, we like them to have detail, we like to have the recognition of materiality and this building, in our view, is one suited to the notion of concrete and steel in its robust industrial precinct.”

Bialek also sees Tapestry connecting with another common feature of the area’s landscape, the terrace house: “The screens are like the old verandah on a terrace, or the frieze over the top … (in a terrace house) they may have been wrought iron but ours are a combination of the metal screens and glass balustrading.” 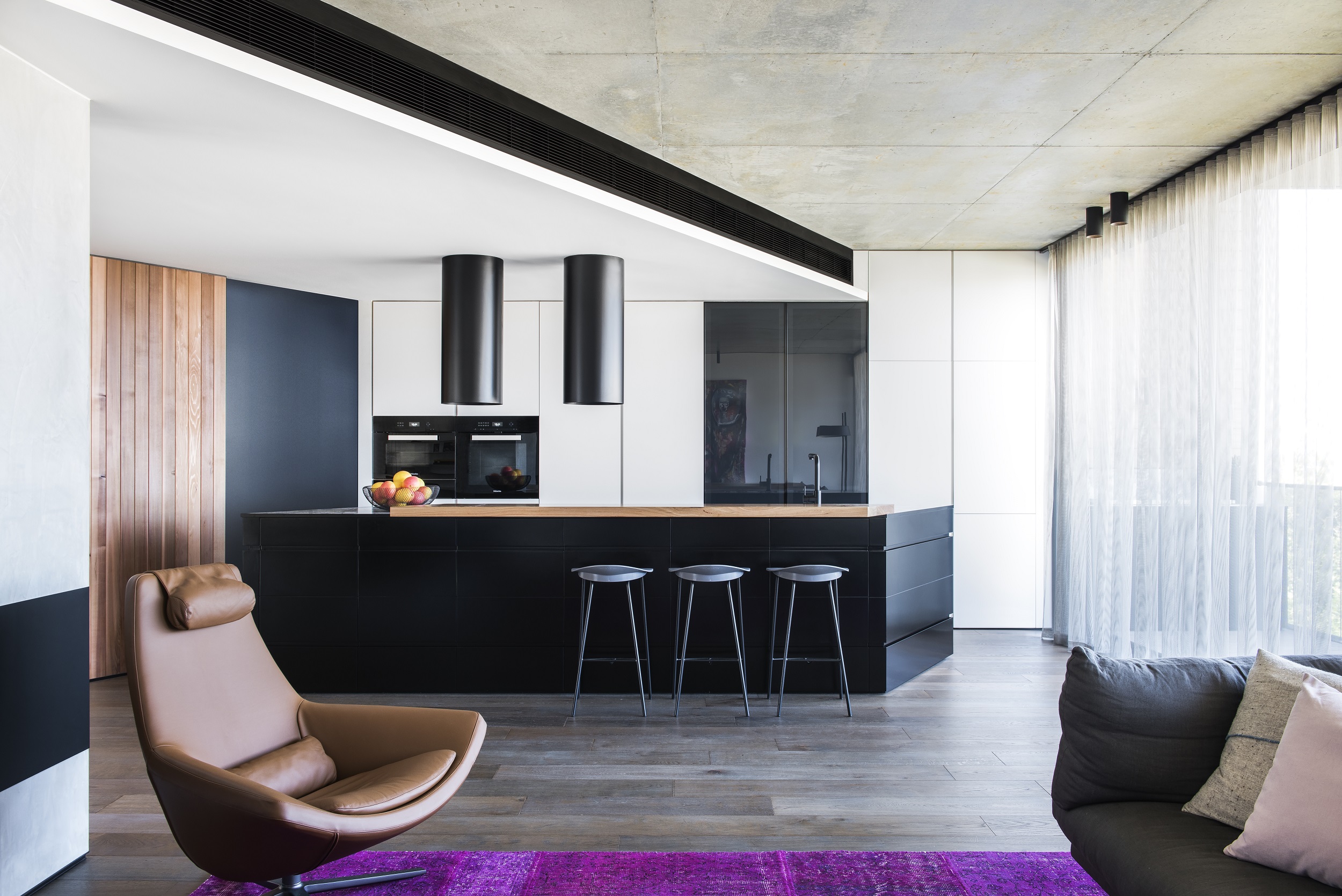 For Wong, one of the most interesting aspects of designing Tapestry was finding a way to get light into the centre of the site’s narrow block, while retaining enough floor space for 21 one and two-bedroom apartments. “When you’ve only got a 10m frontage and you’re trying to get two apartments into that frontage, you’ve got to get the bedrooms to the back so all the front portion is the living, kitchen and dining – all the active day space. And then the bedroom’s a bit more secluded,” he says. The solution was to sink four light wells through the centre of the development, each strategically placed to maximise light for residents. “The light wells have been turned into landscaped courtyards at ground, private courtyards that bring natural light into the bedrooms,” says Wong. “Placing the apartment bedrooms around the light wells meant we could comfortably fit dwellings into the narrow site, without impacting on amenity,” he explains.

The light wells also face onto the common corridors and provide additional natural light – and glimpses of greenery via more plantings – for residents coming and going from the shared lifts. 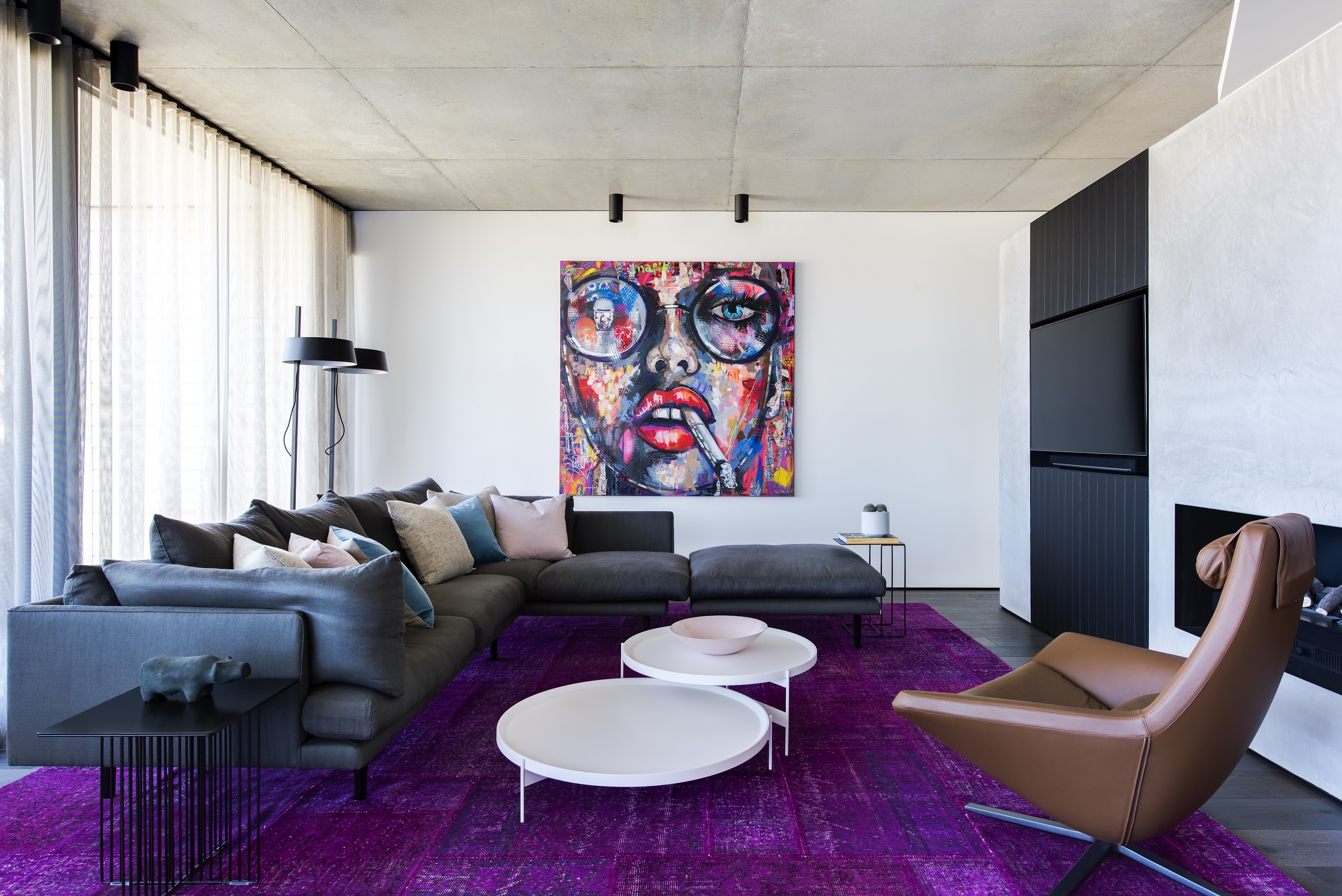 Tapestry’s design also plays with the relationship between the public street and the intimate indoors. First, there are those moveable metal façade screens that give residents a choice about how public or private they want to be. Second, the interiors concept was drawn from one particular external element – the splayed edge of the building’s wrapping, as Léo Terrando, SJB Interiors director and project lead, explains: “The one sharp angle – the inspiration came from that. We tried to reference that one detail of the architect’s work to the inside.” 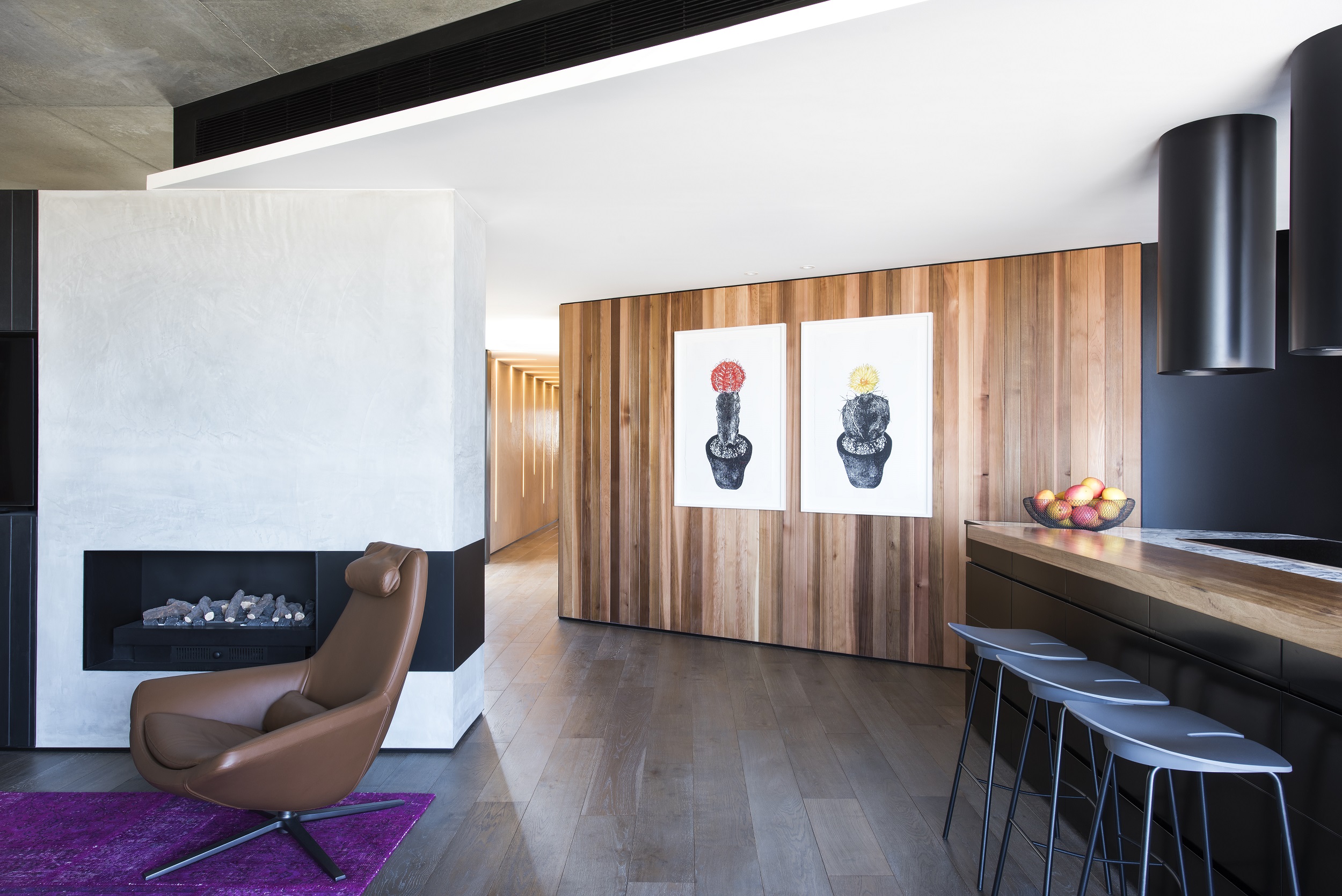 This ‘angular’ detail is evident throughout the interiors, including walls that act almost as joinery in the kitchens, and in the bathroom, where the shower is placed at the tip of a triangle. The large kitchen island bench also has a trapezoidal form, with one end jutting out onto the balcony, so the indoor island bench also facilitates outdoor entertaining.

“The kitchens are treated as a composition of sculptural objects,” Michael says. “Like the exhaust is a circular tube, the benchtop has a triangulated cut-off edge to a rectangular shape, so it’s always interesting.” 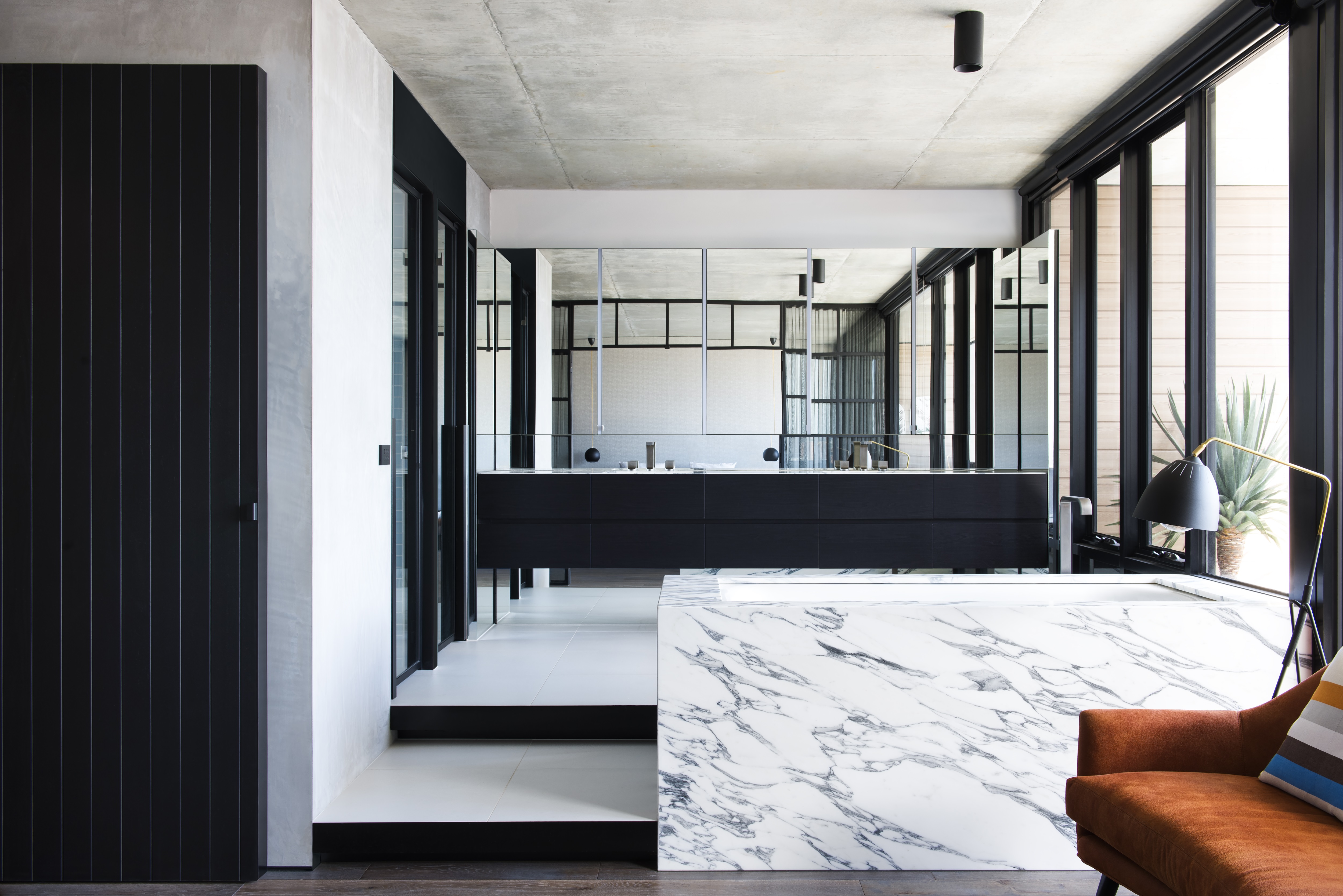 The interior details extend into Tapestry’s lobby area, where triangular details on the wall give way to a metal screen featuring multiple box shapes that echo the building’s exterior, and the large singular gesture that juts forth into the streetscape (and also serves as the building’s letterbox.) “There’s always a balance between the triangle and the square,” says Terrando. 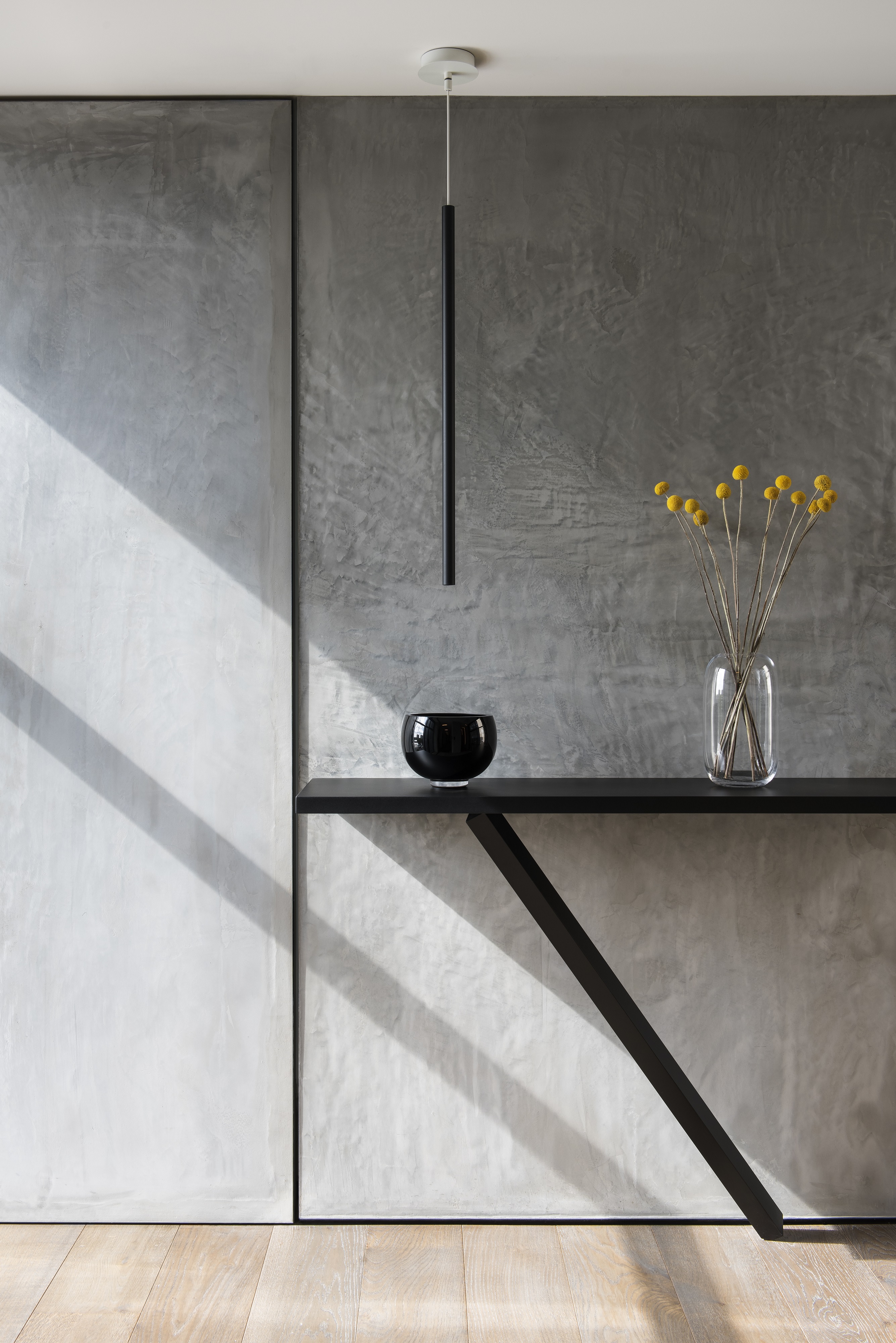 In attempts to gentrifying a suburb gracefully, every aspect of this project has been conceived as part of a larger whole. The multi-faceted building has been designed to fit within its diverse industrial-urban environment through a close attention to the fine details. Moreover, it says something of the character of Collingwood with details such as the sculptural pipe-like exhaust fan above the kitchen stove tops, as a subtle reference to the factory chimneys still evident in the neighbourhood.