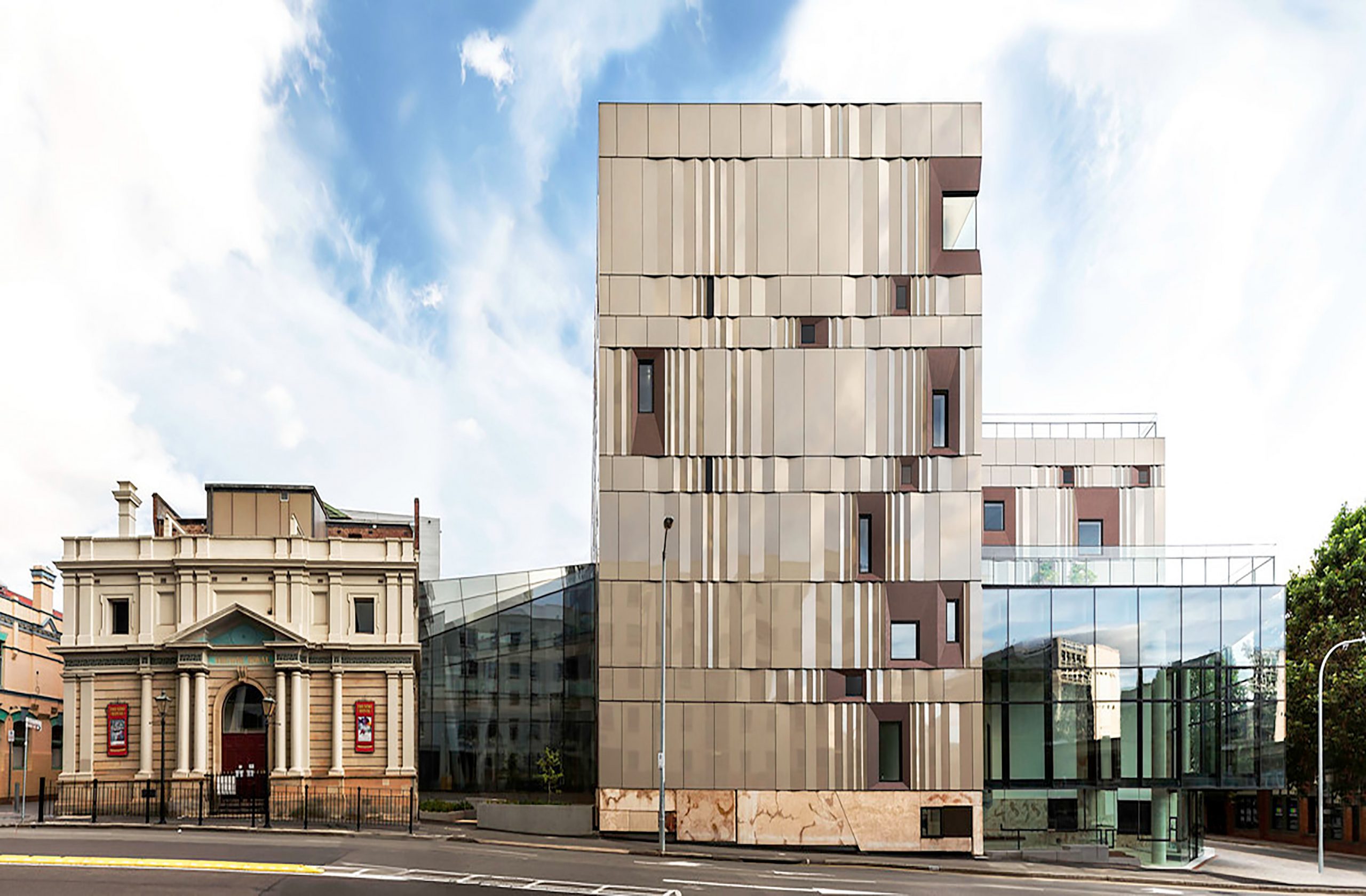 Sensitive and communal – The Hedberg by LIMINAL Studio and WOHA

Back in 2013, Hobart-based transdisciplinary design practice LIMINAL Studio with Singapore-based WOHA Architects were awarded the internationally competitive bid to deliver a creative arts destination, The Hedberg.

Designed to galvanise the imaginative heart of Hobart and fuel Tasmania’s cultural offering in a global and contemporary context, The Hedberg is a place of ceremony that merges ancient traditions with modern innovations.

Funded by a unique partnership between the University of Tasmania, the Federal and Tasmanian Governments and the Theatre Royal, which is Australia’s oldest and continuously operating theatre, The Hedberg is designed to enhance longevity.

The Hedberg, with its professional music and performance hubs, world-class showcase venues and workshop laboratories, is all about telling stories of the past overlaid with aspirations for the future.

Site sensitive, The Hedberg is informed by its cultural and community contexts. People-focused and intimate, the building celebrates the role the built environment plays in enhancing an understanding of the place that inspires innovative immersion for its users, practitioners, performers, educators, producers, musicians, students, visitors and patrons.

Described as a ‘festival in a building’, The Hedberg evokes a sense of the theatrical activities inside.

The external expression is influenced by the minimalist and dancing forms in contemporary music notation with the cladding suggesting a shimmering theatrical curtain being pulled open to reveal the warmth within.

LIMINAL Architecture, one of the interdisciplinary identities under the LIMINAL Studio banner, drew upon the opalescence of Tasmanian abalone shells, which were traditionally used to carry fire, for the exterior of The Hedberg. The reference nods at the significance of fire in cultural exchange and the role it plays as the original natural ‘theatre’ for storytelling.

In their approach to scale, the design team balanced the compositional scale of The Hedberg by visually separating the new building from Heritage dwellings nearby. Glass lobby spaces were also used as connections between the inward-looking performance spaces.

Speaking on this respective design strategy, LIMINAL Architecture co-founder and director Elvio Brianese says the new building “appreciates and explores elements that define the heritage of the site while satisfying contemporary requirements”.

“Even though its volumetric requirements are far greater than those of adjacent Heritage buildings, the project’s design is contextual and well-mannered.”

In a further effort of this Heritage-sensitive strategy, WOHA co-founder and director Richard Hassell adds that modern materials were used to harmonise with the masonry, sandstone and brick of the historical buildings.

“We wanted The Hedberg to feel more like a cluster of buildings on the city block, than a huge performing arts building that overwhelms the modest-scale Heritage structures,” says Hassell.

The convivial and first-time collaborative relationship between LIMINAL Architecture and WOHA allowed design concepts to push past boundaries of what would have previously or individually been possible.

The result is a precinct that is deeply aware of its context with an understanding of its unique place on the global stage.

All photography by Natasha Mulhall unless otherwise stated.

LIMINAL Architecture is internationally awarded and operates as one of the interdisciplinary identities under the LIMINAL Studio banner, which also includes LIMINAL Spaces, Objects, and Ideation, known for its collaborative and community-engaging processes.

WOHA focuses on researching and innovating integrated architectural and urban solutions to tackle the problems of the 21st century such as climate change, population growth and rapidly increasing urbanisation. The practice has accrued a varied portfolio of work and is known for its distinct approach to biophilic design and integrated landscaping.

Also in Tasmania, architecture and interior design studio Cumulus drew upon the rhythm of the natural landscape of the Freycinet Peninsula in a new winery, The Devil’s Corner.

Why do modern architects have so much indifference to the street level experience?