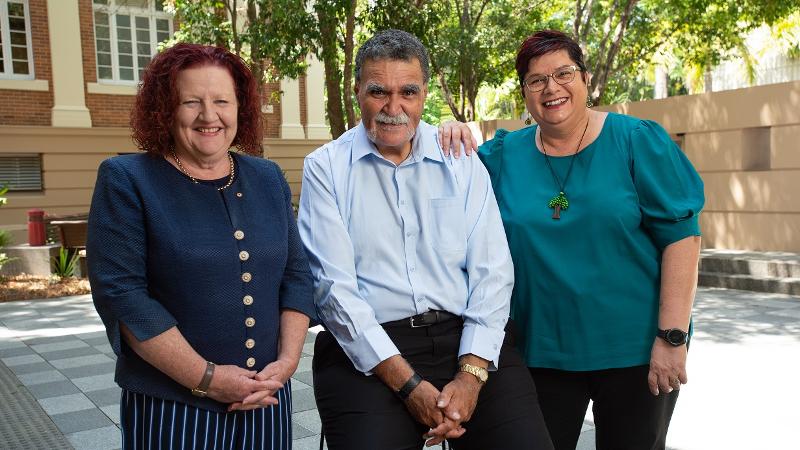 Campus to Country was created to highlight the significance of the land on which QUT sits, fostering deeper understanding and recognition of Indigenous Australian occupation and connection to Country.

Pro Vice-Chancellor (Indigenous Strategy) Angela Barney-Leitch said the strategy would shape QUT’s Gardens Point and Kelvin Grove campuses to reflect the culture and history of Indigenous Australians by creating a sense of belonging and place for all.

“QUT’s Gardens Point and Kelvin Grove campuses are located on the Country of the Turrbal and Yugara people,” Barney-Leitch says.

Squares, plazas, and courtyards will be created to gather and connect people at important sites. Bridges and links at both campuses will enable movement throughout the spaces. Indoor and outdoor rooms and verandas will be created to support connections. Public art will also feature.

QUT Elder-in-Residence and proud Yugara man Uncle Gregory “Cheg” Egert said, as the original inhabitants and custodians, the Turrbal and Yugara people have a strong connection and sense of belonging to the land and waterways of QUT campuses.

“The Brisbane River surrounding Meanjin is the life blood of this country and has an important role in Yugara and Turrbal connection to land,” says Uncle Cheg.

“This strategy will foster a greater recognition and understanding of Australia’s First Nations People and the historic and cultural significance of the land QUT inhabits,” Professor Sheil says.

“Our ongoing consultation and engagement with Indigenous Australians will be vital to ensure their perspectives are meaningfully considered during the implementation phase.”

MPavilion’s BLAKitecture forum is currently in progress, with each talk exploring how built environment practitioners can “work with Country rather than against it”.