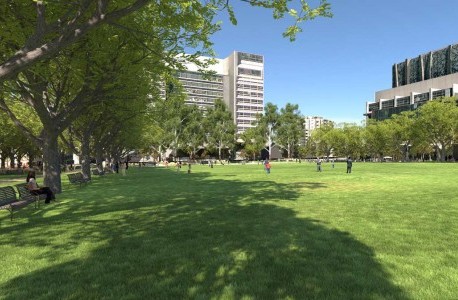 Above: Plans for the redevelopment of University Square. Render courtesy City of Melbourne.

The City of Melbourne has released details of a draft master plan for an $8.8 million redevelopment of University Square in Carlton.

The City of Melbourne is working with the Victorian Government and the University of Melbourne on the redevelopment, which will include the planting of 253 new trees. The public open space will be expanded to 8700 square metres, and a water terrace, biodiversity corridor, and new public art will be added to the Square.

“University Square is one of Melbourne’s oldest public squares. We are transforming it into a larger and greener open space within the heart of Carlton’s education precinct,” Lord Mayor Robert Doyle said. “Melbourne’s gardens, parks and open spaces are a major contributor to our liveability. It is vital that we plan and invest now to ensure future generations continue to have access to quality green areas.”

The Lord Mayor said the Metro Tunnel project will improve public transport access to University Square when the new underground Parkville Station is built on its doorstep at Grattan Street.

Chair of the City of Melbourne’s Environment Portfolio, Cr Arron Wood, said the expanded open space would help cater for the 82 percent of Carlton residents who live in apartments with little access to outdoor space.

Meanwhile, the City of Melbourne is inviting the community to have their say on a four year, $15.9 million plan to transform Southbank Boulevard and Dodds Street to create more public open space for Southbank.

The plans involve partially closing Southbank Boulevard, resulting in the creation of up to 2.5 hectares of public open space, starting in front of the Melbourne Recital Centre, the ABC Southbank Centre and the Melbourne Theatre Company and continuing to the Yarra River.

“The series of new spaces would feature open lawns, new trees, play spaces for children, improved pedestrian connectivity, more than one kilometre of new bike lanes and enhanced connections between where people live and work,” the Lord Mayor said. “Dodds Street would also be redesigned into a public space that can cater for everything from street performances to medium scale music festivals.”

The community can share their feedback on the proposal until Tuesday 20 September here.