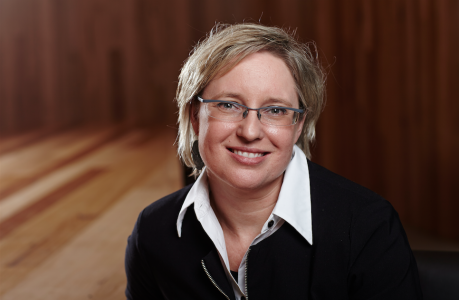 On infrastructure and risk: Larisa Moran

Alongside Moran, Woods Bagot also hired Peter White as chief financial officer and Andrew Kalinowski as director of people and culture. Moran comes from a strong accounting background – her 20 years of experience including long stints as partner at both Grant Thornton and KPMG.

The first surprise then perhaps is why she was interested in the COO role and not the CFO. “It’s been a huge career change,” she admits. “It really stems back to a lot of the work I was doing as an accountant… I spent a lot of my career advising clients on restructuring, expansion, succession planning and so forth.

“I was partner in charge of human resources for my division, so I had lots of opportunity to work in areas outside of accounting for my whole career and it was those areas that I really enjoyed working in and became passionate about – the strategy, the technology, the human resources elements. Finance never goes away. It’s in my DNA and it’s obviously fundamental to the business… but it’s not something that I have granular responsibility for on a day to day basis.”

So what was Woods Bagot looking for when it hired Moran? The key piece for them was to engage someone in the organisation that could really focus on bringing the infrastructure of the organisation in line with the growth trajectory,” says Moran. “And so that was the role of a COO. They had contemplated the role of a joint CFO/COO, but then they realised that the task was actually big enough to warrant individuals on their own in those roles.”

It wasn’t just the role that was a huge change in direction for Moran, but indeed the very industry. Yet Moran says she was undaunted by this whole new world. Her drive stemmed from “moving out of accountancy and into industry in terms of that leadership role within an organisation”, she explains, adding, “but also in terms of my family background. My father is in design so I had an appreciation and understanding of architecture and design. “There’s something fascinating about being part of something that’s physically built. And you can touch and feel when the end product is complete. There’s a buzz that you can get out of that that you can’t get in many other industries.”

And it is a different industry – full of creative and design oriented folk. What has she learned about the discipline of architecture and its unique qualities?

“I realised that architects are some of the most highly educated, highly intelligent people that we have and yet they seem to be
quite underappreciated and undervalued, which was surprising to me. I get to engage with individuals here who have extraordinary intellect. It’s very complex, in terms of what they do, and the amount of understanding they need to have – about communities and the social environment and political environment and how our cities are developing – is quite vast. Their breadth of knowledge is not just siloed to ‘how do we design a building?’ it goes so much beyond that. I really don’t think they get the credit that they’re due. So it was quite an interesting light bulb moment for me.”

With this in mind, in a practice like Woods Bagot, how do the suits converse with the creatives at the coalface and make sure they’re all on the same page?

Moran believes her client adviser background has helped here and that there is a common language. “My experience is it’s fairly well aligned. Being a client adviser my whole career, I’ve had to focus on how to have the right conversations with my client so that they can understand the message that I’m trying to get across. That I can understand what their needs are. You’re constantly having to adjust the way you engage with individuals. I continue to do that in my role here.”

Principal Bruno Mendes says the management/creative relationship at Woods Bagot has changed over the last couple of years, since Moran, White and Kalinowski joined the firm in fact. “We have been using a three-legged stool model whereby projects require three particular skill sets – those that focus on management, others on design and others on technical,” says Mendes. “The issue with this set- up is that it creates very distinct types of people who focus on their specific responsibilities. In the last year or two, personally, I’ve been trying to break down that kind of management because I think it’s really important to create the all-round individual. At the end of the day we as designers or managers need to care about design and management. I think the two are fundamentally connected.”

The practice’s growth demanded a different model, agrees Moran. “The complexity of the business, as Bruno has mentioned, and its size and geographic dispersement, means you really have to engage and communicate in a completely different manner. Compared to the past,” she says.

And, conversely, how does the C-suite talk to each other? The COO role has been memorably described as resembling the relationship between a vice president and a president. Is this true? Does Moran see herself as the Joe Biden to CEO Nik Karalis’ Barack Obama? Moran laughs, but emphasises that Woods Bagot has a “structure in place that is more of a team kind of approach to the running of the business.

“But yes, Nik and I work well and I help him in terms of delivering the strategy to the organisation and the vision that he’s created. It’s a fantastic relationship.”

Was there any concern within the company before those new roles were appointed? “Woods Bagot, being a commercial firm… there’s always a little bit of negativity towards commercial firms, big is bad, all that sort of stuff,” says Mendes. “But to be quite honest, within the practice itself there’s a series of smaller offices. The true benefit is when you bring all these little teams together, and you bring the reach that you’ve got, say, in New York which is about to wake up when we’re about to go to sleep. The ability to tap into the different bits of the world and different skill sets is the true benefit of having a global practice. So big isn’t bad.”

After a year and a half in the role, Moran says that on the whole there have been few surprises. “Probably the piece that I didn’t really appreciate was how complex the organisation was. Because it spans so many geographies, so many time zones. And has so many different sectors of expertise.” Woods Bagot currently has 17 offices across the globe, with a presence in Australia, Asia, the Middle East, Europe and North America. Managing these disparate elements, not to mention time zones, is clearly a formidable challenge. “We don’t run a hierarchical organisation,” explains Moran. “It’s what we would call a matrix structure. So we have leaders of regions and leaders of disciplines that all manage the business together. And therein lies the challenge of a global studio across five different time zones.

“Technology is a really key piece in our organisation, not only from the design point of view, but in terms of the way we operate as a business. We may have 20 people working on a project and they may be from three different offices. So you need to be able to have that infrastructure set up so that you can work on the same project at the same time.”

That challenge is certainly worth it, however. “From a Woods Bagot perspective, because we are so geographically dispersed, potentially where there’s some instability in one area, hopefully there are some upsides and positives happening in another area, and we can play off that risk if you like.”

Despite the current political instability in countries like the US and the UK, with the presidential election and Brexit respectively, Moran says the company sees huge potenial and has had a number of sector leaders relocate to North America to build the team there. “Australia represents about 47 percent of our revenue,” she says. “Asia has been a huge growth market for us over the last five to 10 years, so the big opportunities for us are in North America and Europe.”

Whether ‘big is bad’ or not, there are only so many practices the size of a Woods Bagot in the world. If Moran were running a small to medium sized architectural business in Australia in the current climate, what would her future proofing strategies be? As always, it comes back to having the right people in place in all areas of expertise, she believes.

“Clients of architecture firms and professional services firms generally are becoming more sophisticated. Architecture firms need to invest in their non fee-earning experts. Strong finance, business development, technology and research teams will be the difference between successful firms and those that will tread water,” she says.

And in the future? How does she see her COO role evolving over time? “The key piece for bringing me into the role at Woods Bagot was because the infrastructure really hadn’t kept up with the pace of the growth over the last six years. And we’ve done an extraordinary amount of work already in the last 18 months in bringing that all into a state where it’s really now strongly supporting the business. We’ve still got some work to do as always, but I think the role will really evolve in terms of being more strategic and more forward thinking and future focused rather than a bit of catch-up,” she says.

And on a personal note, has this radical career change taught her anything else? Is there anything she would do differently if she were starting out today? “I think earlier on in my career I would have taken more risks and put myself out there in order to take more opportunities when they came across my path. I have certainly done that in more recent years, but in the earlier part of my career I would say I was more conservative and didn’t need to be.”