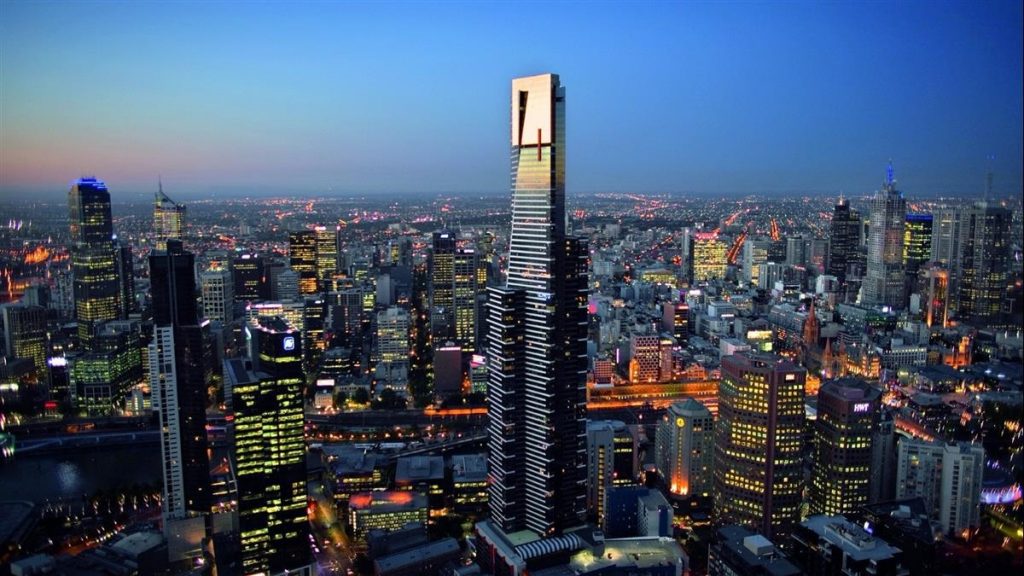 We all held our breath when the Sydney Opera House was unveiled and some shook their heads when Melbourne’s Federation Square was finished, but Australian architecture has come a long way in the last couple of decades.

To celebrate Australia Day, ADR looks back at our favourite buildings to grace our skylines in the last half century.

120 Collins Street was designed by architectural firm HASSELL in association with Daryl Jackson. Finished in 1991, 120 Collins Street is a postmodern building that pays homage to New York’s most famous Art Deco buildings – the Empire State Building and the Chrysler Building.

Set into the parkland and surrounded by a field of grasses, Neeson Murcutt Architects’ Prince Alfred Park Pool is a very special building. The space inside is playful and full of joy; the soft blue painted finishes are set so nicely against the deep colours of Australian hardwoods.

Mosaic tiles, enormous round skylights in the change rooms and sharp graphics create a sense of fun that Sydney has embraced.

Until the 1960s, mathematicians thought that you needed 20,426 different tiles to tile an infinite area without ever repeating the pattern exactly, but in the mid-1970s, Roger Penrose did it with just two – a fat one and a skinny one with exactly the right proportions.

ARM’s design for the interior and façade of Storey Hall incorporates Penrose’s ‘fat and skinny tiles’ to explore the concept perfectly.

The Academy of Science, Canberra

From the walkway between the moat and the inner walls, the arches provide a 360-degree panoramic sequence of the capital city and the hills beyond.

Interestingly, the elegant eucalyptus sound baffles created a form of optical interference, rendering half of the people in the room nauseated. Eventually, the visually offending gaps were filled with strings, which fixed the optical problem without spoiling the acoustics.

Its oversized parasol roof, the almost primal circular cut-out windows and the semi-circular porch openings at the building’s corners suggest deep shade and cool retreat from Townsville’s dry heat. There’s a certain power about this very direct, even crude simplicity – it speaks to the undulations of the age-old landscape that surrounds the campus.

Built on the site of the old Phoenix hotel, Fender Katsalidis Architects’ 28-storey apartment building stands on an impossibly narrow block on Flinders Street, which is just 6.7 metres wide.

What is fascinating about this building is that it was built using an innovative methodology utilising a customised concrete ‘jump form’ system. This system is commonly adopted when constructing high-rise elevator cores; and the way the system has been extended and applied to the building structure on this site is truly fascinating.

The building was literally extruded, relying on hydraulic action to lift formwork components.

One of the world’s largest musical instruments, The Bell Tower houses the Swan Bells in a distinctive 82.5-metre high tower located in Barrack Square.

Designed by William Hames, the tower was planned so that the bells, which came from the church of St Martin-in-the-Fields in Trafalgar Square in London, would hang at exactly the same height as they had in their original home, encased in a glass tower surrounded by copper sails to reflect the riverside setting.

But it was controversial from the start, with criticism of the design and the $5.5 million price tag generating a great deal of media attention at the time. Today the site is one of the city’s most iconic tourist attractions.

Odd list. How was it selected? in 2007 AR-Australia invited 1,000 architectural professionals to nominate their “top five” pieces of Australian architecture from the past 25 years and created a list which was much more thought -provoking and less form-driven. Only non-architects seem to think that crazy-shaped-buildings (yes looking at you Storey Hall!) = architecture.